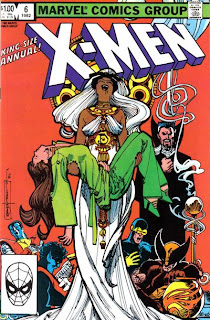 In a Nutshell
The X-Men fight Dracula. Again.

Plot
In upstate New York, Rachel Van Helsing returns home to discover Dracula waiting for her. Meanwhile, at the X-Mansion, Kitty is tremendously upset upon learning her parents are getting divorced, and runs off to her room, where she fails to notice an encroaching shadow. That night, Storm dreams of draining the X-Men's blood and reuniting with Dracula. When she awakens, she realizes Dracula is summoning her and departs to meet him, unwilling to endanger her friends' lives. Kitty watches her go, then attacks Colossus. Storm arrives at a manor in Cornwall, and is greeted by Rachel, now a vampiric thrall of Dracula. Breaking his word to release his hold on her, Dracula sends Storm to steal the Darkhold, a book containing the Montessi Formula, a spell capable of destroying Dracula once and for all. Once she retrieves the book, she's attacked by Kitty and Colossus, the later now a vampire, who take the book for themselves and leave Ororo to flee the police with Dracula. 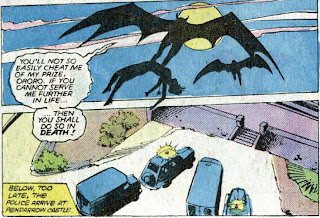 Later, Storm awakens in Dracula's crypt as he's about to fully turn her into a vampire in order to use her against Kitty. Just then, the X-Men arrive, having traced the Blackbird Kitty stole, and attack. When Kitty and Colossus join the fray, Dracula escapes through the manor's catacomb. The X-Men follow and Wolverine is bitten by Dracula, turning him against his teammates. Kitty attempts to use the Montessi Formula, but is stopped by Nightcrawler, who says using the spell would have cost Kitty her soul. Realizing Kitty is being possessed by his daughter Lilith, Dracula calls her out, but is staked by Rachel. The X-Men and Rachel escape as the manor collapses around them, and Wolverine stakes Rachel to spare her the agony of death by sunlight. Lilith-as-Kitty reappears, explaining how she sought to destroy her father using the Montessi Formula, possessing Kitty and enthralling Colossus to that end. Telling the X-Men that with Dracula's death, Storm and Wolverine will be free of his control, she disappears, leaving Kitty with no memory of her recent actions.

Firsts and Other Notables
This issue opens as Kitty learns her parents are getting divorced.

In addition to Dracula, the villain of this story is Lilith, Dracula's daughter (not to be confused with Lilith, the Ghost Rider villain from the 90s). In a nutshell, she was transformed into a vampire (but one with different weaknesses than the traditional vampire) by a gypsy curse and set to forever haunt Dracula. Whenever she dies, she reappears by taking over the body of someone else (usually a woman who hates Dracula and wants to see him defeated). She bummed around Marvel's various horror and occult titles in the 70s and the early 80s before "dying" for good, though judging from Wikipedia, she's since popped up again. 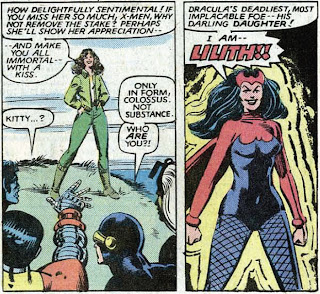 Like Lilith, Rachel Van Helsing (granddaughter of Abraham Van Helsing, Dracula's enemy from Bram Stoker's novel) comes from Marvel's Tomb of Dracula series, where she was a frequent antagonist of the title character. Oddly enough, it seems her death in this issue, after first being turned into a vampire by Dracula, has stuck, something of an ignoble end for the character, on a few different levels...

Both the Darkhold and the Montessi Formula are also staples of Marvel's horror/occult titles. I believe that Dr. Strange will eventually use the Montessi Formula to eliminate all the vampires on Earth, though as so often happens with these things, it weakens over time and vampires come back.

A Work in Progress
It's said that Professor X is on Muir Isle during this story (it's also kind of cute that Colossus is doing homework, one of the few times we see the new X-Men doing that).

Storm has a nightmare of the day her parents were killed and she was trapped in rubble. 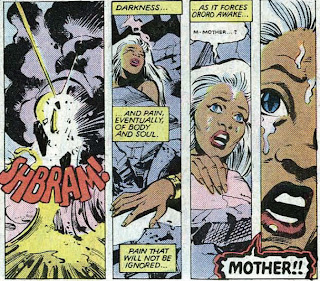 Nightcrawler is aware of the Darkhold and is able to recognize it by sight. 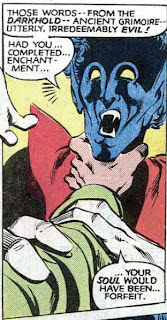 Storm snaps at Cyclops that she's the leader of the team. 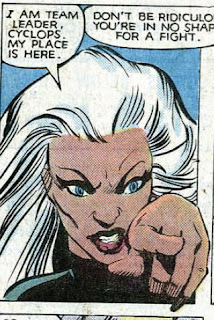 Though Rachel has been transformed into a vampire and seeking death, Storm is unable to kill her. 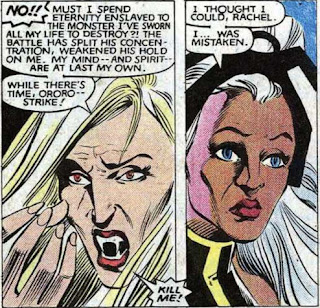 Later, Wolverine puts her out of her misery. 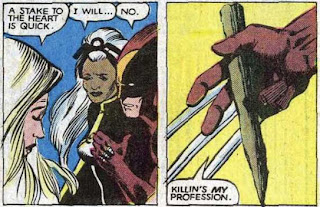 In addition to Storm, both Wolverine and Colossus are at least partially turned into vampires in the course of the story, though they're all returned to normal by the end of the issue.

I Love the 80s
Kitty has Rolling Stones posters in her bedroom. 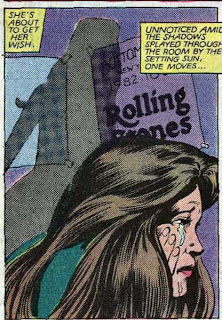 Young Love
A Lilith-possessed Kitty tries to seduce Colossus before turning him into a vampire in a scene that reads an awful lot like sexual assault. 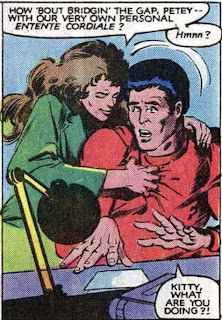 The Awesome and Terrible Power of Cyclops Kitty
Learning about her parents' divorce, Kitty displays some mad awesome angst.

Teebore's Take Obviously, this issue is a sequel to Uncanny X-Men #159, but while that issue was a successful attempt to drop the X-Men into gothic romance, the follow-up falls flat. Bill Seinkiewicz returns to pencil the story, and though his panel layout and figure work are just as strong, the art this time around lacks the mood and atmosphere of the first story. The X-Men are only tangentially necessary to the story: Storm's connection to Dracula (which, it's revealed out of plot necessity, Dracula didn't sever after all) provides their in, but otherwise, they are simply pawns in a struggle between Dracula and his daughter (and Lilith's plot is ridiculously complicated). Claremont tries to get some mileage out of the various character's approaches to killing their enemies (chiefly Storm), but that material was handled ad nauseum (and better) in the Brood story. Once more, nothing here is terrible, but it's all rather perfunctory and unnecessary. Which, unfortunately, pretty much sums up all the annuals from this era.