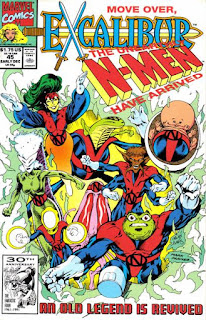 In a Nutshell
Nightcrawler leads Technet in investigating a series of museum thefts.

Plot
Technet, led by Nightcrawler, stakes out the Major Mainwaring Museum, on a tip from Miss Witherspoon, the clairvoyant friend of Inspector Thomas. They intervene when it appears a theft occurs, but it turns out to be Micromax, also staking out the museum on behalf of F.I. 6. But Technet's showing angers Nightcrawler, who wants them to act more like a team, and realizes he needs to give them a sense of group identity. Meanwhile, on Otherworld, the attack on Brian Braddock is called off on orders from Roma, He then learns more about the nature of his powers and Excalibur's lighthouse from Captain UK. Back on Earth, Rachel and Meggan continue their search for Meggan's parents, while Micromax stakes out another museum. When a necklace is seemingly stolen by an invisible otherdimensional being, Technet intervenes again, this time dressed in matching uniforms and working more like a team, and they manage to defeat the creature and stop the theft, much to the surprise of the creature's master. On Ee'rath, Kylun and Sa'teen reach the throne room of Necrom, the same person orchestrating the thefts on Earth, and he sets a resurrected, zombie-fied Excalibur against them.

Firsts and Other Notables
This issue resolves another dangling plot thread, that of the question of Captain Britain's powers fading the further he traveled from England, revealing that all Captain Britain's across the multiverse draw their power from a mystical convergence of energy centered on England, with their costumes designed to store that energy like a battery for their use when away from England for long periods of time. Because Captain Britain's Corp-issued costume was destroyed, he lost that backup system and was eventually rendered powerless after being away from England for too long (this issue also makes it pretty clear Brian is something of a dimwit when it comes to the lore and function of the Captain Britain Corps). 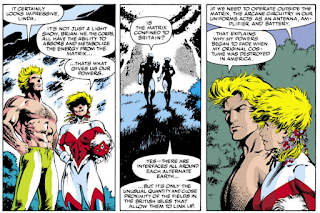 It's also revealed that Excalibur's lighthouse is a nexus point of realities, which explains all the various instances where characters ended up transported into random universes while inside the place. 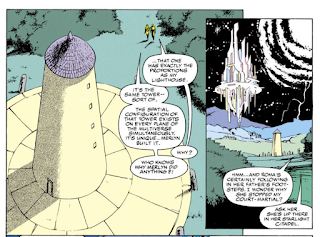 This is the first appearance of Necrom, the tyrant against whom Kylun is leading his rebellion on Ee'rath, and also revealed to be the person behind the mysterious thefts being tracked by F.I. 6 and Nightcrawler's Technet. He serves as the chief villain of the story which culminates in issue #50. 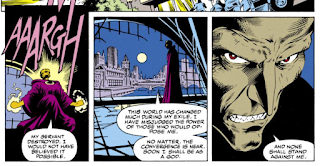 'Inky' Blott, the leader of F.I. 6 (the investigative unit to which Micromax belongs) also appears for the first time. He apparently has a past with Inspector Thomas. 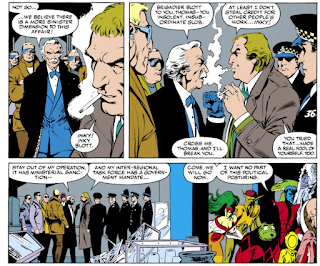 We see the (resurrected) Ee'rath Excalibur this issue, now under the control of Necrom, which consists of Spider-Man, Thor, Black Knight and (presumably) Ee'rath's Captain Britain. 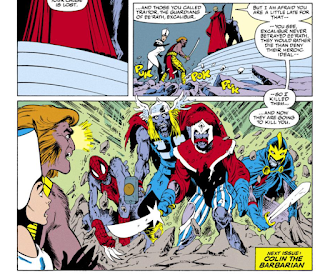 The cover is, of course, an homage to Giant-Size X-Men #1.

A Work in Progress
In the midst of helping train Technet to work as a team, Nightcrawler briefly worries if his former X-Men teammates viewed him simply as the team's mascot. 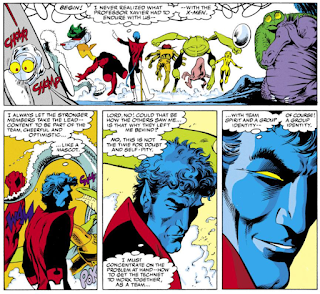 Rachel gives a little more explanation as to the whole "dampening the Phoenix Force" thing she did last issue, explaining that doing so seems to allow her fractured memories to repair themselves to some degree, prompting her to continue doing so. 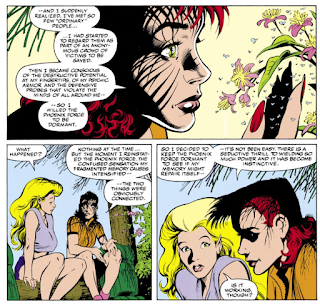 Professor Xavier's re-acquistion of the X-Men's Blackbird from a WHO facility in Uncanny X-Men #278 is acknowledged in this issue. 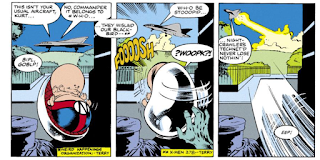 The Grim 'n' Gritty 90s
In Captain UK's reality, Madonna is apparently poised to become the next British monarch.

Austin's Analysis
One's enjoyment of this issue is likely predicated on how much patience one has for Technet shenanigans. Yet, for as much as that is the A-story of this issue, and for as much fun as it was seeing Nightcrawler realize what a challenge Professor X had in all those years of training X-Men (along with a touch of self-reflection about his role on the team), once again, it's the stuff on the margins of the main story which are the most interesting. Captain Britain getting saved from the horde of angry Captain Britains by Roma is an almost literal deus ex machina resolution to last issue's cliffhanger, but in the process, Davis continues to slyly and subtly tie off dangling plot threads, as the issue of Captain Britain's fading powers from earlier in the series is finally explained and put to rest. Meanwhile, the Kylun subplot is quickly positioning itself as plot, as the villain of his world is shown to be operating in the 616 universe as well. All together, it highlights what's quickly become a strength of Davis' run: each issue is so jam-packed with stuff, there's bound to something for everyone, such that even if the A-story is less than thrilling, the B-story may work better, and some distant, seemingly-forgotten plot point will probably get explained away, too. And it'll all look gorgeous, regardless.

Next Issue
Tomorrow, more dives into Wolverine's past in Wolverine #49. Next week, Uncanny X-Men #284 and X-Force #6.