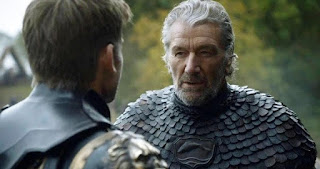 River Run
Walder Frey's army is at River Run castle that has been taken over by Blackfish. They show off Edmure and threaten to kill him if Blackfish doesn't surrender. Blackfish tells them to go ahead and kill him. Lothar Frey and Walder Rivers (yup, had to look those names up) realize that killing a hostage immediately renders the hostage useless so they decide against killing him. They're stumped as to what to do as an army comes up from behind them.

Fortunately for Frey's army and unfortunately for...well...everyone else it's Jaime (with Bronn!) and the Lannister's army coming to help Wlader Frey's army. Jaime tells Lothar and Walder they're idiots for writing checks their butt won't cash and then decides to have a parley with the Blackfish.

Jaime rides up to the castle entrance and a bunch of archers point arrows at him. They should kill him. Blackfish comes out not to kill Jaime but instead “size him up.” He should kill him instead. Jaime says he and the Lannister army are going to eventually win so the Blackfish can save a lot his men's lives by giving up. Which I assume means the Blackfish would be executed but his men would certainly be allowed live, right? Because the Lannisters and Freys are so trustworthy.

Anyway, Blachfish isn't impressed and dares Jaime to enter into a two years castle siege. How about instead of taunting Jaime Blackfish just kills him? Jaime is the only real threat. Whatever. Jaime trots off still alive and in one piece (well, minus the hand he lost so long ago but you know what I mean).


Braavos
Arya knows she needs to get as far away from the House of Black and White as possible. So she charters a ship with a couple bags of gold but wisely takes the gold back to ensure the captain won't just steal it. The ship is set to leave that night.

So, what do you do when you've got time to kill and magical assassins who can look like anybody are hunting you? You take a leisurely stroll down a bridge and take in the view, of course! An elderly woman comes up to Arya and...woah! It's actually the assassin woman! Never would've guessed that!

So the Waif grabs Arya and instead of snapping her neck or slitting her throat or stabbing her through the eye or something, she just stabs Arya repeatedly in the stomach. Arya struggles and falls into the river. The Waif thinks that's good enough but Arya lives. She's in bad shape, though.

King's Landing
Maergary meets with the High Sparrow who says he may sound like a benevolent man-of-the-people but he actually wants everyone to conform to specific gender roles. That means Maergary needs to be sexing up Tommen even if she doesn't want to. Because if she's not having sex, she's useless. Well except as a tool for recruiting and...you know...her mother isn't a convert and becoming a Sparrow may help her not get procesecuted...

Maergary meets with her mother, Lady Olenna. Olenna wants nothing to do with the Sparrows. Maergary asks Olenna to leave King's Landing and at first Olenna wants to stay and protect her children but Maergary slips Olenna a piece of paper with a picture of a rose on it and this let's Olenna know that Maergary is really just trying to do what is best for her family.

So Lady Olenna is preparing to leave but she first goes to tell Cersei “Peace out!” Cersei wants Olenna to stay and help fight the Sparrows but Lady Olenna is like, “You fucked up and gave the Sparrows power and when they were focused on the Tyrell's it was all fun and games. Then they turn their attention on the Lannisters and NOW they're a problem? Screw yourself. You deal with them. I may hate the Sparrows and don't want to see them win but, as a consolation prize, at least their winning means you're losing.” Then Lady Olenna conjures a microphone from the future and promptly drops it.

On the Sea
In (let me look it up) Volantis Yara is all making out with a naked prostitute. Theon is not enjoying himself as much. Yara is sick of the mopey, Reek-ish Theon and tells him to drink ale, since alcohol is the solution to all of life's problems.

The beer seems to bring back some of the old Theon so Yara lets him in on her plan. Basically, she wants to undercut Euron by bringing their ships to Daenerys first. It makes sense.

The Wall
Jon Snow is on a recruiting tour of the North. First off he gets the Wildlings on board. That was easy enough, right?

Next Jon Snow goes to Bear Island which sounds like an amusement park to me. The fact that it's headed by a prepubescent girl does nothing to dissuade me from this thought. However, this prepubescent girl, Lady Lyanna Mormont, is a bit of a hard ass. (In a good way.)

Lyanna Mormont says her loyalties lie with the Starks and before her is a Snow and Lannister-Bolton (poor Sansa!). Davos interjects saying that, in the end, a divided North is a weak North and the North needs to be strong because of ice zombies. Lyanna buys into this and gives Jon Snow a whopping 62 soldiers. She says they're worth 620 soldiers. We'll see, I guess?

Now Jon Snow is off to House Glover but fails miserably there. House Glover lost a lot of men following Robb so they're not keen on following Jon Snow. Nothing convinces him otherwise.

So Jon Snow thinks he needs to attack Winterfell now. Sansa wants more men. Jon Snow gets the final decision. They're marching to Winterfell. Sansa then sends out a raven.

On the Road
The Hound lives! Who would've predicted that? Apparently, after his fight against Brienne, he was badly injured but nursed back to help by some Sparrows. Now he's helping them chop wood and build...stuff.

He talks with Ray, the leader of these people, who is very devout. Although, to be fair, he doesn't claim that the Seven is the true religion, only that there is something greater out there. Which is obviously true in that world.

So, the Hound integrates himself into this group and then the Brotherhood Without Banners arrive asking for supplies. The group doesn't have any supplies so the Brotherhood leave. But the Hound knows they'll be back.

Later, the Hound is off somewhere chopping wood. Suddenly, the Hound feels a great disturbance in the Force, as if 50ish people suddenly cried out in terror and were suddenly silenced. He fears something terrible has happened.

The Hound runs back to find that his people are all dead and Ray has been publicly hung. The Hound grabs his ax and walks off. He does not appear to be in a good mood.

Other Thoughts
I thought the Brotherhood Without Banners were relatively good? Maybe I'm not correctly remembering it?

A cold open is unusual, isn't it?

For whatever reason, whenever a woman is stabbed in the abdomen I start wondering about her ability to have a child. Is that sexist? Regardless, I wonder if Arya not being able to have children now, if true, will play into anything in the future. She'd no longer be a viable wife for most men, since she can't produce an heir. (Not that Arya is worried about if she'll get married.)

We get Bronn back AND the Hound? I think we have some happy fans!

If I was Edmure I'd try to kill myself so I couldn't be use as a pawn. Then again, I talk a big game from my living room.

Seriously, Blackfish should've killed Jaime. Why show respect or honor to the exact two houses responsible for the Red Wedding?

How does Blackfish know about the oath Jaime swore to Catelyn Stark?

Both House Mormont and House Glover speak of being loyal to the Stark, which Jon Snow and Sansa technically aren't, but they never mention saving Rickon (who is still a Stark) from Ramsay.

If I were Jon Snow, I'd march to River Run and help the Blackfish out and then take his army to Winterfell, but Jon thinks there's no time. Also, I have no idea how big of army Jaime has brought. Maybe Jon Snow's army wouldn't stand a chance?

It's odd that Lady Lyanna Mormont is marching with Jon Snow.

Where was the Hound at the end of this episode? How did like 50 people get slaughtered and one person get publicly hanged and he not hear at all? I mean, I know the people wouldn't have put up a big fight but they'd scream and run or something, right?

Everyone is excited for a fight between the Hound and Franken-Mountain in a trial by combat. I'm not. Even if it didn't mean the Hound winning meant the High Sparrow wins, the Hound has already been denied any vengeance. Sure the Mountain's body may be animated but is he alive? This would be the equivalent of pulling the plug on someone's life support. That's not revenge. Isn't the point of revenge to have the other person know who and why the revenge is happening to them?

Bronn: You promised me a lordship, and a castle, and a highborn beauty for a wife.
Jaime: And you'll get all three. "A Lannister always..."
Bronn: Don't say it, don't fucking say it!

Jaime: He's an old man.
Bronn: And you've got one hand. My money's on the old boy.

Olenna: You've lost, Cersei. It's the only joy I can find in all this misery.