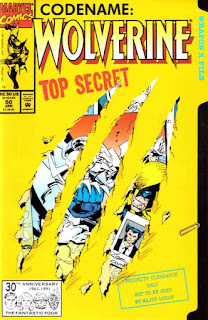 In a Nutshell
Wolverine learns his memories have been altered as he battles Shiva.

Plot
With Forge's help, Wolverine tracks down the refueling SHIELD helicarrier and strong-arms Nick Fury into handing over his security dossier. The transfer of those files catches the attention of a Hydra cell. Thanks to information in the files, Wolverine, accompanied by Cyclops, Jean Grey, Jubilee and Professor X, goes to a warehouse in Windsor, Canada. He enters the building alone, watched by both Hydra and Professor Thorton. Inside, he finds sets that correspond to many of his memories, while Professor Thorton activates the Shiva scenario, which brings forth a massive robot programmed to kill Wolverine. He destroys the robot, but the Shiva program is designed to learn from its defeats and powers up another body. This one proves harder to destroy, and as Professor Thornton watches the battle, he's attacked by the leader of the Hydra cell, a very-much-alive Silver Fox. As they fight, Shiva triggers all of Wolverine's memories, overwhelming him. He manages to snap out of it, insisting he's a man, not a beast, but Silver Fox realizes her memories were tampered with a well. She kills Professor Thorton just as Wolverine destroys the latest incarnation of Shiva. Joined by the X-Men, he discovers Thorton's body, and learns that Shiva has moved on to target the next name on its list: Sabretooth. Wolverine could care less though, about him and the other mutants on Shiva's list, a change in attitude that Professor X finds unsettling.

Firsts and Other Notables
Both Jean and Xavier suggest in this issue that Wolverine's exploration of his past is causing him to act more irrationally, reverting to his previous temperment when he first joined the X-Men. This seems to be an effort on Hama's part to rough up some of the edges of the character, sanded down by years serving as the X-Men's elder statesman, but it doesn't really take, at least not outside this series (and certainly, by the time the issues in which I regularly started reading roll around, I never noticed a difference), though it is perhaps too subtle a distinction to be making, especially in this era of comics. 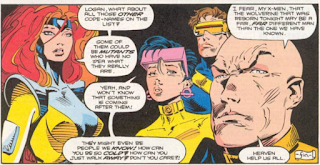 Wolverine is wearing his old blue-and-yellow costume this issue, which (chronologically) leads into its appearance in X-Men #4. It will remain his default look in this series for most of the rest of the series, with some variations.

Teased throughout the previous two issues, this one categorically establishes that Wolverine's memories have been altered and in some cases, are completely false, the result of tampering done by what will eventually be known as the Weapon X project (here, it's usually called Project X). As a result, most of the flashbacks from the previous two issues, including Wolverine's time in Cuba with Sabretooth and his fight against an apparent gun-running Silver Fox, are revealed to be fakes. The one questionable event is Wolverine's time with Silver Fox, which he insists was real.

Her death, however, seems to be a fake memory, as she turns up alive and well this issue, in some kind of leadership position within Hydra. Her presence here is mostly just a tease (Wolverine doesn't learn she's alive), and she'll feature more directly in future issues. 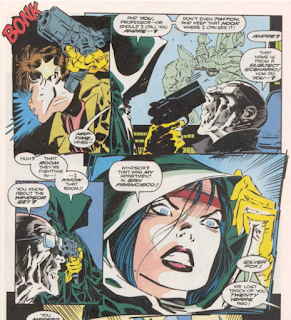 She does, however, kill Professor Thorton; he will appear again in flashbacks, but this is his last present-day appearance. 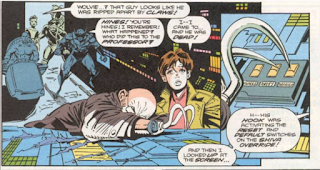 This issue marks the first appearance of Shiva, a program designed to eliminate rogue members of the Weapon X project, which physically manifests as a series of large robots (the mold of which was seen briefly in issue #48). Capable of learning from its past defeats and rebuilding itself, as the issue, ends Shiva has set its sight on the next person on its list, Sabretooth. 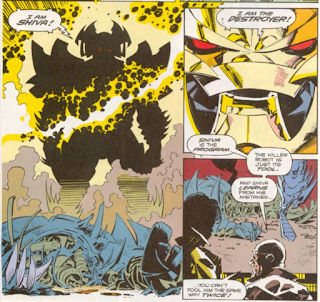 Searching through government files, Professor X learns that the Weapon X project sought to create super-soldiers from mutants, and was a CIA operation that was sheltered in Canada. 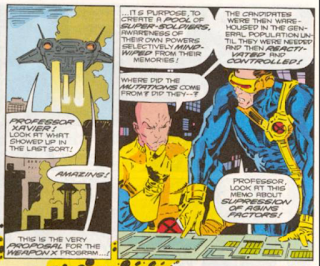 He proceeds to find a list of operatives, including Wolverine and Sabretooth, all of whom are codenamed with some kind of animal. All of those characters named will eventually appear in one form or another as the series continues to explore Wolverine's past. 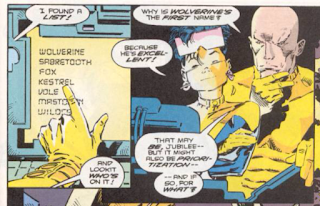 Because this is an issue with a number divisible by 25 published in the 90s, it's double-sized and gets a fancy die-cut cover (the first true cover gimmick to the hit the X-books, not counting Uncanny 275 and X-Men #1's gatefold covers) in which cuts from Wolverine's claws are cut into the cardstock cover, which lays over another image.

This issue concludes with a pair of pinups, one from Bill Sienkieiwicz and a rather ugly one from Jim Lee. 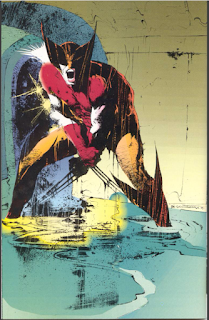 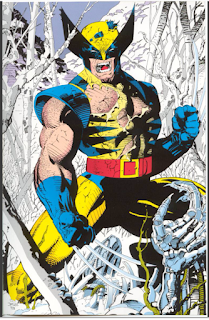 The Chronology Corner
This issue (and the entire story) takes place before X-Men #4, with Professor X, Jubilee, Cyclops and Jean Grey all appearing between X-Men #3 and that issue.

A Work in Progress
Cyclops and Jean Grey appear in this issue, wearing their new costumes, while Jubilee is back in the team training uniform.

This issue reveals that the SHIELD helicarrier, at times, refuels at the top of a skyscarper in Manhattan; not sure if the is consistent with established SHIELD protocol, or something Hama just made up for this issue. 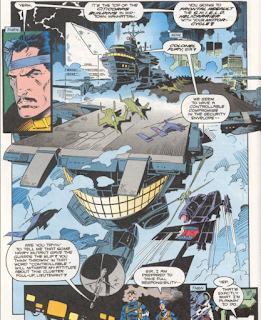 Professor Thornton is revealed to be an agent of the US Department of Agriculture, specifically its Pest Control division (which seems to be an established covert division).

At one point Wolverine wanders through sets that were used to stage his false memories, including the site of his confrontation with drug-runner Silver Fox from the last two issues. 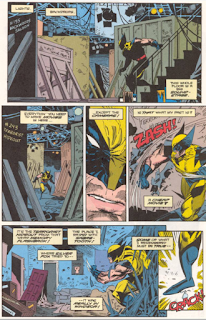 Professor Thorton notes that to save money, the sets were used to establish overlapping memories among the members of the Weapon X project.

The saloon where Sabretooth goaded a young Wolverine into attacking him, as seen in issue #10, is shown to be a set a well.

The professor notes that for whatever reason, everyone's memory of Wolverine's cabin with Silver Fox consistently bleeds through all his other implants, resisting being overwritten. 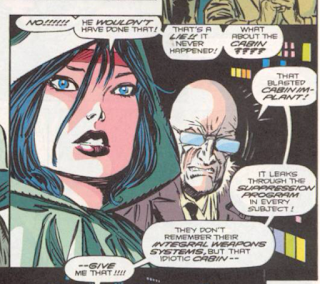 The Grim 'n' Gritty 90s
Wolverine's secret files, which he strong-arms out of Nick Fury, are faxed over. 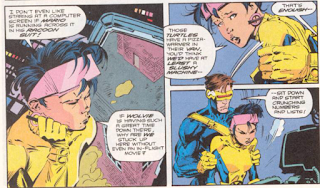 The Best There is at What He Does
Via the files received from Nick Fury, this issue confirms that, at least at one point in time, Wolverine worked as a CIA agent, something that had been previously teased via his interactions with Carol Danvers.

Austin's Analysis
Technically the conclusion to "The Shiva Scenarios", this issue makes it clear that the story as whole is really just a vehicle for setting up more stories in the future. And while a lot of what gets revealed/established here seems old hat nowadays, especially after we've had an entire series dedicated to pretty much just doing what this three issue arc does, it's important to acknowledge just how big a deal this story was at a time, when explorations of Wolverine's past were mostly confined to hints and flashbacks to finite periods of time (as in the original miniseries, or Kitty Pryde & Wolverine). And as a vehicle for exploring Wolverine's past, "The Shiva Scenario" mostly works.

I'm a sucker for the stuff, previously hinted at, that gets established here - black ops, false memories, living weapons - and from a continuity perspective, the notion of Wolverine having a mix of real and fake memories is rather ingenious  - anything inconsistent can thus be written off as a false memory. None of these revelations happen in a vacuum for the title character, as last issue and this one in particular are as much about Wolverine's reactions to these revelations and how they're changing him as they are about the revelations themselves, which helps the whole thing feel less like continuity implant it invariably is.

Yet as a story in and of itself, this is less successful. It's mostly three issues straight of flashbacks, most of which are, in the end, suggested to be false (and thus kind of pointless in the end). The intended lasting impact this seems to be setting up, the idea that Wolverine is changed by these experiences to become wilder and rougher than before, doesn't really go anywhere; even without my having read the issues that immediately follow this one, Wolverine's appearances in contemporaneous issues of other series, including X-Men, don't really reflect that change, making the whole notion something of a non starter.

Ultimately then, this issue is less the satisfying climax to a story than an issue which codifies some things we already suspected (Wolverine's memories were suspect) while laying the groundwork for future stories (with the return of Silver Fox, the escape of Shiva, and the list of Weapon X names). As a story, "The Shiva Scenario" isn't terribly engaging, but it is what it set out to be: the most significant thing, in terms of its impact on the title character and the generation of future stories, to happen in the series thus far, and it works exceedingly well at being that. Whether this issue marks the beginning of a long overdue exploration of a mysterious character's past or just the opening of a Pandora's Box of bad story ideas, there's no doubt it succeeded in its goal.