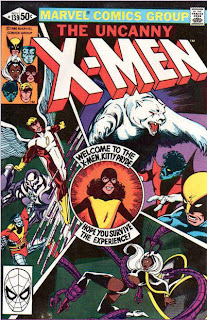 In a Nutshell
Wolverine goes to Canada and makes peace with Vindicator.

Plot
The X-Men work out in the Danger Room under the supervision of Professor X while Kitty Pryde looks on, but the recently re-joined Angel is out of practice, and almost gets Nightcrawler hurt. He apologizes for his mistake as Nightcrawler brings in some refreshments and Kitty Pryde chooses a code name. Wolverine, wearing a new costume, decides it's time to put an end to his troubles with the Canadian government once and for all, and declares his intention to return there to set things right. Professor X agrees, and sends Nightcrawler along to keep Wolverine out of trouble. Later that day, Storm takes Kitty into Salem Center to meet Stevie Hunter, her new dance teacher. Kitty is excited to be able to continue dancing, and takes an instant liking to Stevie. In Canada, Heather Hudson, wife of Alpha Flight's Vindicator, returns home to find Wolverine and Nightcrawler waiting for her. Happy to see Wolverine again and to hear that he's returned to make peace, she tells him that her husband and Alpha Flight are in the north country, on Hudson Bay, investigating some kind of trouble. 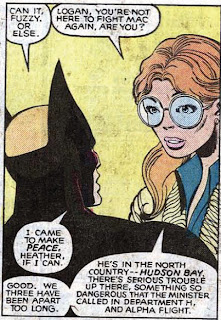 To the north, Vindicator streaks across the sky, landing at a base camp to confer with Shaman and Snowbird when Nightcrawler and Wolverine arrive. Nightcrawler manages to quickly diffuse the tension between Wolverine and Vindicator, and a truce is declared. Vindicator fills in the X-Men on their situation: a Canadian Mountie and his family were attacked on a camping trip, the Mountie killed and wife and children missing. Wolverine realizes they were attacked by a Wendigo, a monstrous beast who feeds on human flesh that Wolverine once fought, along with the Hulk, when he worked for the Canadian government. Believing the Mountie's family might still be alive because Wendigo likes fresh meat, Wolverine offers his and Nightcrawler's help in dealing with the creature. But as Nightcrawler leaves the cabin to fetch their supplies from the rental car, he is suddenly attacked by Wendigo!

Firsts and Other Notables
This issue is best remembered for debuting Wolverine's brown-and-orange, John Byrne-designed costume, which will become his standard look until his old blue-and-yellow costume returns in the early 90s. This costume is generally considered by fans to be the preferred look for the character, as it's a little less ostentatious than the bright blue-and-yellow number, and thus, more appropriate for the character. I tend to go back and forth on the matter.

Kitty Pryde receives her first costume, a black-and-yellow variation on the blue-and-yellow uniforms worn by the original X-Men in the early days of the series. This will become the standard "uniform" for the school, also worn by the eventual New Mutants. She also receives her first codename, Sprite, though she'll go through several codenames in the months to come (in fact, she'll eventually use Professor X's first suggestion, Ariel, which she dismisses in this issue). 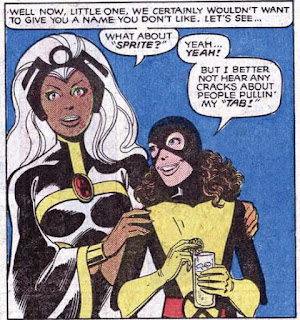 The tagline on the cover, "Welcome to the X-Men, Kitty Pryde. Hope you survive the experience!" becomes a recurring phrase, often appearing in some form or another whenever a new member joins the team.

Angel is revealed to have re-joined the team between last issue and this one, bringing to an end the relatively brief period following Cyclops' departure in which there were no original members on the team, and furthering Byrne's stated mission to bring in as many of the original X-Men as possible.

This issue also marks the first appearance of Heather Hudson, wife of Alpha Flight's Vindicator. It's revealed that she, her husband and Wolverine were all close friends back in the day, and Wolverine's flirtations with her here will eventually lead to the revelation that she is another in what will become a string of unrequited loves in Wolverine's past. Heather will, in time, lead Alpha Flight in her own right, wearing a version of her husband's suit.

Stevie Hunter also makes her first appearance, as Kitty's new dance teacher, and Storm's jealousy of her is hinted at slightly. Stevie will eventually become something of a phys ed teacher for Xavier's school, working in a similar capacity with the New Mutants as well as Kitty, and will remain a supporting character throughout Claremont's run. 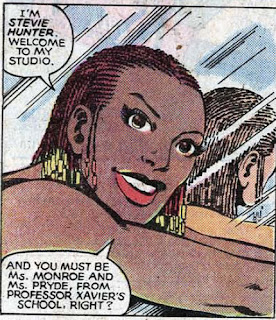 Alpha Flight returns to the book for the first time since their first appearance in issues #120-121, though in a nice bit of editorial coordination you'd never see these days, only half the team appears, with Sasquatch, Aurora and Northstar appearing in Machine Man #18 (the editorial caption refers to Machine Man #19, but the Official Index notes that it's actually issue #18).

This is the first 22 page issue of X-Men (up from 17 pages), a result of a page increase across all Marvel titles at this time.

Finally, this is the first issue of X-Men for which John Byrne receives sole plotting credit, with Claremont reduced to merely scripting the book.

A Work in Progress
Nightcrawler mentions that it's been several months since Jean died.

For anyone who missed the annual, it's noted again that Storm is now the team leader and that Kitty is uncomfortable around Nightcrawler.

Kitty's status as a genius also gets a bit more play. 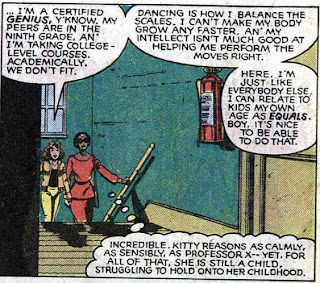 In a bit that's always cracked me up, Professor X asks that Wolverine not call him "Charley", to which Wolverine responds, "sure, Chuck". 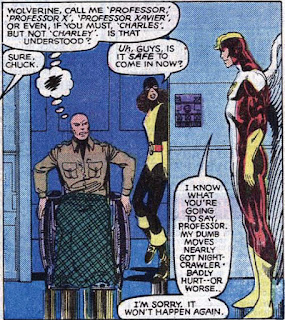 Nightcrawler gets a nice moment in which he reflects on Jean's death, and the crisis of faith its caused. 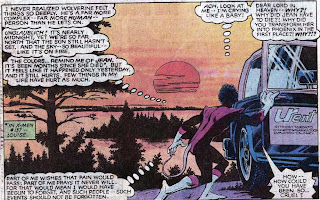 I Love the 80s
Thanks to a high slit in her skirt, Heather Hudson definitely makes the most out of the "sexy librarian" look.

Vindicator tells Snowbird to investigate a disturbance but keep a low profile, which she does by transforming into...a polar bear.

The Best There is at What He Does
Nightcrawler learns that Logan is Wolverine's real name, and we get a third instance of the classic "I didn't know/you didn't ask" exchange. 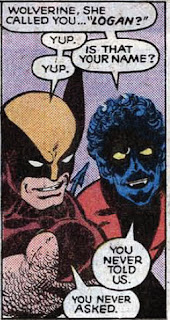 Wolverine also spends much of this issue with a beer in hand, smoking a cigar. While it's not the first time the character has been seen doing either, it does seem like the first time a lot of attention was given to these habits. 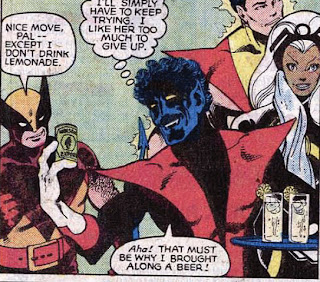 "I'd been campaigning for a costume change for Wolverine since my first day on the book. The 'Fang' costume was, as Dave [Cockrum] said when he showed me the original drawings, 'a bitch to draw!', so I got rid of that immediately. But I wanted something more reflective of what a real wolverine looks like. Amazingly, few of them are yellow and blue!"

Nickerson, Al. "Claremont and Byrne: The Team that Made the X-Men Uncanny." Back Issue August 2008: p10.

Claremont on making Kitty a genius
"I made her the genius of the team because we didn't have one, and I felt the team needed somebody with a brain, somebody who could whip up gadgets in an instant, who could explain things, understand things - a Beast-character, a Reed Richards, a Tony Stark. Every team needs one. The X-Men didn't have one."

John Byrne on Claremont making Kitty a genius
"I was very pissed off at Chris when he made her a genius. I did not approve of that at all and it was too late for it to be changed when I found out about it. I felt as if I'd lost the character at that point. She wasn't the girl I thought she was...I think that a lot of our readers are that age; and it gives them somebody to - that dreaded word - identify with. Because she's real, because she's all elbows and knees, klutzes around."

"I created Kitty as a challenge. I said, 'Chris, write a normal girl,' and he couldn't do it; he made her a genius, which is not a normal girl, no matter what you do with it. My main faulting with Chris is that he falls into schticks. I probably fall into schticks with my art, but nobody's bothered to tell me about it yet. Maybe I'll fall into schtick as a writer too.

Teebore's Take
In the comments to last week's post, reader mortsleam likened X-Men Annual #4 to the premiere episode of a new "season" of X-Men (and expressed his feeling it was lacking in that regard). From that perspective, this issue serves as a much better season premiere for the second "season" of Claremont and Byrne's run. It opens with significant changes to the status quo already in place: Wolverine has a new costume, Kitty is in costume, Angel has rejoined and Storm is firmly entrenched as team leader. All of these changes occur off screen, and a later comment from Nightcrawler establishes that several months have passed since issue #138, much in the same way that the time between seasons of a TV show often passes for the characters just as it does for the viewers, allowing for a strikingly-different status quo to be in place at the start of a new season.

Of course, this new "season" of Claremont/Byrne will unfortunately be a short one, and the back half of this issue transitions away from the intriguing new team dynamic to setup what will ultimately be a fairly generic super hero action story featuring a fairly lame villain (but more on that next week). Fortunately, that setup manages to be entertaining in and of itself (a horribly padded retelling of Wolverine's first appearance aside), as we get some nice character development for Byrne-favorite Wolverine (not surprising, since Byrne plotted this story solo) as well as some fun interplay between him and Nightcrawler and the resolution to Wolverine's long-running "feud" with the Canadian government.