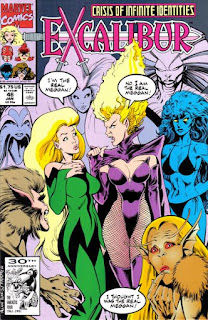 In a Nutshell
Kylun comes to Earth while Rachel & Meggan's quest comes to an end.

Plot
Kylun & Sa'tneen manage to defeat Necrom's zombie Excalibur, but Necrom slays Sa'tneen in the process. Enraged, Kylun chases Necrom into the Tower That Crosses Time and emerges before a shocked Nightcrawler in Excalibur's bathroom. After learning Nigthcrawler speaks English and seeing Widget, Kylun realizes he's returned to his homeworld. Meanwhile, in France, Meggan & Rachel battle a pair of illusory monsters crafted by two elderly brothers who are harnessing the power of a captive Neuri. As Kylun tells Nightcrawler of how he came to Ee'rath and expresses fear that Necrom is looking to establish a new empire on this world, Meggan & Rachel learn the Neuri, not Meggan's parents, is the being they've been tracking. Taking them into the Alshira, the Neuri shows Meggan her true form, and explains that while she didn't find her parents, their journey wasn't a complete loss, as both she and Rachel have found a sense of identity in the process. As the Neuri dies, Meggan returns to her previous form, saying it's the one she chooses to take, and the two fly for home. Back at the lighthouse, a sudden explosion heralds the arrival of a large, bug-like alien.

Firsts and Other Notables
Kylun comes to Earth (or Earth-616, technically) this issue, and it's revealed that he's Colin, the young boy whom Widget teleported away from Vixen in issue #2 of the series. He proceeds to tell Nightcrawler what happened to him between that issue and his next appearance in issue #42. 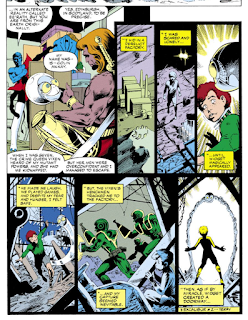 He arrives in pursuit of Necrom, and it's established that time works differently between Earth and Ee'rath, allowing for Necrom to have arrived on Earth long ago enough to have orchestrated the museum heists of the last few issues even though he saw him leave Ee'rath only moments before Kylun in this issue. 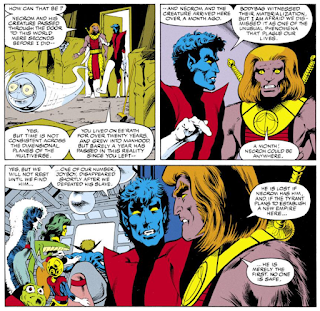 This issue reveals that the alien world Nightcrawler accidentally stumbled on in the first issue of the series was Ee'rath, just moments before the birth of Princess Sa'tneen.

Meggan's pursuit of her parents, which is ultimately fruitless but does work to answer some questions regarding her identity, brings her into contact with one of the Neuri, the mystical primate-like people who first appeared in Wolverine: Bloodlust, by Claremont and Davis. 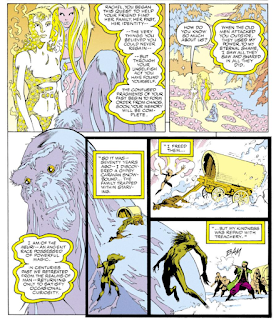 A Work in Progress
On Ee'rath, Excalibur's lighthouse, which we learned last issue is static across the multiverse, is referred to as "the tower that crosses time".

Kylun's swords are unable to harm anyone of true virtue and pure spirit. 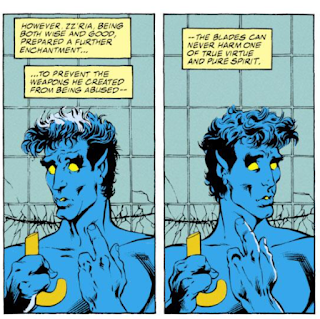 Widget builds himself a body this issue, appearing as something other than a floating head for the first time. 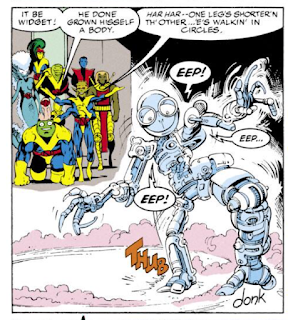 Austin's Analysis
Ever so slightly, Davis begins to tie his plot threads back together in this issue, bringing an apparent end to Meggan's search for her parents and Kylun back to Earth (in the process, referencing some of the oldest issues of the series), while also establishing how Necrom came to be on Earth-616 last issue, prior to his fight with Kylun on Ee'rath. Beyond that, there's not a whole lot else to say about this. Excalibur under Davis remains the gem of the line, with the book clicking on multiple levels such that it's an enjoyable read even independent of the fact that Davis is also doing a massive cleanup of the series' dangling narrative threads along the way (and much of the whimsy that characterized the earlier collaborations between Claremont & Davis, which always held me back from fully embracing the series, is being downplayed as well). But that also makes it difficult to come up with things to write about beyond saying "it's good" over and over. But is is, nevertheless, quite good.

Next Issue
Tomorrow, Wolverine confronts his past in Wolverine #50. Next week, Uncanny X-Men #285 and X-Force #6.