Show Me Yours Blogfest

Fellow blogging buddies Falen, Hannah and Summer are hosting the "Show Me Yours" blogfest, in which participants share a 500 word (or so) excerpt from their finished or unfinished novel from last November's National Novel Writing Month challenge. Below is an excerpt from my unfinished NaNoWriMo 2010 book, Dawning Equinox. Be sure to check out any one of those lovely ladies' blogs for the full list of blogfest participants. 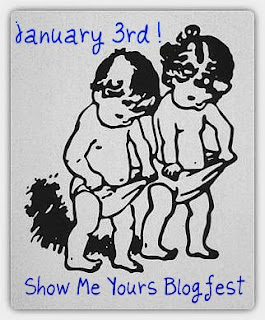 This excerpt is a relatively straightforward action scene (it's also a little longer than 500 words. Shh!!!). All you really need to know is that the main character, Jon Rooker, is a telepathic CIA agent and that just before this scene begins, he's learned his girlfriend has been kidnapped by one of his enemies and Jon's been framed for her murder:

“Jon Rooker, you’re under arrest for murder. Come quietly and it’ll be easier for everyone.”

The words cleared Jon’s clouded mind. He snapped into action as years of training took effect. Jon quickly put his phone away and rose from his knees. He strode past the door, on which the cops were now pounding, and grabbed a frying pan from the kitchen.
Jon waited, the frying pan clenched in both hands, next to the door with his back against the wall. A few seconds later the door fell inside with a great crash.
The doorway was narrow enough that the cops had to breach the room one by one. Jon watched as the barrel of the first officer’s MP5 machine gun entered the room, followed by his outstretched arms. Jon raised the frying pan up and sent it crashing down onto those arms. With a cry of surprise and pain, the cop dropped his gun. Jon swiftly raised the pan, slamming it into the officer’s face. The cop flew backwards, his hands held to his bleeding nose.
Jon dropped the pan and grabbed the second cop, who had dropped his guard when his partner went flying out of the room, by the collar of his tactical vest and pulled him inside the room. Jon pressed a hand against the cop’s face and shouted sleep in his mind. The second cop immediately shut his eyes and crumpled to the floor inside the apartment, sleeping soundly.
Without wasting a second, Jon scooped up the sleeping officer’s MP5 assault rifle and quickly scanned the hallway outside telepathically. There were three men still, two to the left of the door and one to the right. Jon fired the rifle at the light in the outside hallway. It shattered, and Jon sensed the cops moving back a few steps and momentarily focusing their attention upwards.
Jon dove out of the apartment, landing on his side facing the two cops to the left. He fired two quick shots, each hitting one of the cop’s knees. Jon knew he was likely ending their careers, but hopefully they’d get a medal and a nice commendation out of it. It was at least better than getting killed.
Before the remaining cop behind him could react, Jon reached into his mind and planted an image of Jon running down the hall.
“He’s getting away!” the telepathically-hoodwinked cop shouted, turning his back to the real Jon and charging down the hall.
Jon sprang to his feet just as the two men he’d shot were bringing their rifles to bear. Placing a hand on each of them he repeated his telepathic sleep command. The pair fell backwards with a thud. Jon picked up the radio clipped to one of their shoulders. “Suspect is fleeing on foot. We have officers down. Need immediate EMT response inside.”
Then Jon turned back towards the one remaining cop, who had reached the end of the hallway and stopped when he hadn’t seen Jon anymore. He turned back around and Jon saw his eyes widen as he took in the sight of his partners, unconscious and bleeding on the ground, and Jon, still holding the rifle.
“Freeze!” the cop said.
“He’s behind you!” Jon shouted, telepathically making the cop see Jon as a fellow officer. The cop spun around and fired into the wall. Dropping his rifle, Jon sprinted down the hall and came up behind him. Jon slid his arms around the man’s neck and applied pressure. Within a few seconds, the cop went limp. Jon lowered him to the floor, and without looking back, ran towards the stairwell.
Newer Post Older Post Home
Posted by Austin Gorton at 8:00 AM