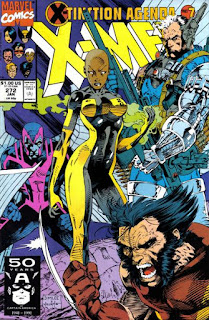 In a Nutshell
The X-Men go on trial in Genosha.

Plot
Public sentiment in the US is mixed as the X-Men are put on trial in Genosha. Brought before a judge, the captive X-Men, New Mutants and X-Factor are told they are subject to Genoshan laws, and if found guilty, will be put to death. The Chief Magistrate makes them an offer on behalf of the president: in place of the trial, they can willing submit to the mutate process. Speaking for everyone Jean refuses, and in the wake of an attack by Wolverine, the judge remands the captives to Hodge's custody. Hodge proceeds to torture and torment the mutants, removing both Forge and Cable's bionic limbs, prompting Psylocke to cry out that she's had enough and will accept the president's offer. Hodge is suspicious, but Havok intervenes, insisting she's under the Genegineer's care now. As Hodge proceeds to pit Wolverine and Archangel against one another, Jubilee, Boom-Boom and Rictor spot the Genegineer and a mutate creating a secret tunnel, and decide to follow him. 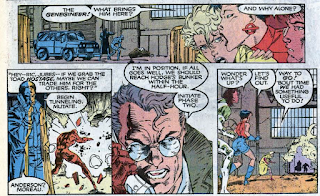 Back at the Citadel, Psylocke makes her escape as Hodge tells Wipeout to meet him at the Genegineer's office, while Gambit manages to free himself and his teammates. Just then, Havok comes across a slain Wipeout, and Rahne appears, proclaiming him the killer. Elsewhere, Chief Magistrate Anderson and Storm are attacked by Hodge, but Psylocke intervenes, holding him off. The three manage to escape, as Anderson insists Storm is the key to restoring Psylocke and her friends' powers. They rendezvous with the rest of the team just as Jean manages to calm down Archangel and Wolverine, and Anderson tells Storm to target Cyclops first. She calls him forth with a gust of wind, and when they touch, both his powers and her adult mind and body return. Hodge then enters the room, prompting a blast from Cyclops. Hodge pulls himself from the rubble, calling Cyclops' shot the best he's ever taken before declaring that now, for the last time, it's his turn.

Firsts and Other Notables
Storm returns to normal as of this issue, bringing to an end both her short time as a Mutate and the final iteration of the "Kid Storm" story arc, as she now has her adult back to go along with her memories. In the process, it's revealed that this was all part of the Genegineer's plan to screw up Hodge's plans, the result of the modification to the mutate transformation process made by the Genegineer last issue. 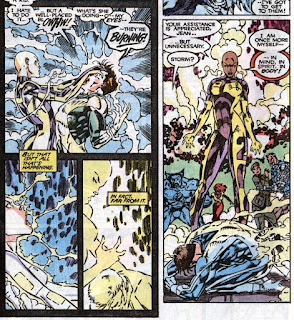 As part of the Genegineer's modifications, Storm can now wipe out Wipeout's power dampening, restoring the abilities of her teammates with a touch.

In a sequence I've always found exceedingly cool, Gambit removes a spike shot into his leg by Hodge with his teeth, drops it so he can catch it with his feet, than picks the lock on his manacles with it, a deliberate callback to Storm freeing the X-Men from Magneto in issue #113, one of the first genuinely cool things Gambit does in the series. 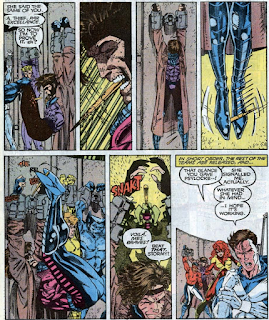 Wipeout dies this issue, killed by Hodge in order to frame Havok. 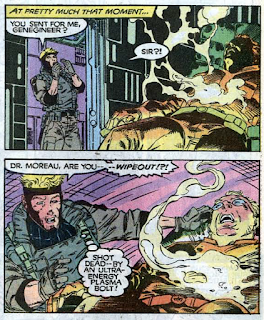 This issue formally brings to an end the "world believes the X-Men are dead!" ruse, via a news report from Manolli Wetherell (which also suggests that the events of "Fall of the Mutants" happened "a few months ago" in Marvel time at this point). 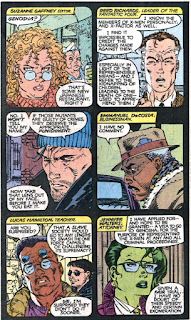 The cover of this issue has been used as the cover for some more recent printings of "X-Tinction Agenda" collections.

A Work in Progress
Between X-Factor #61 and this issue, someone provided Cyclops with an undamaged costume. Wolverine, however, continues to wear a tattered version of his costume.

The computer virus introduced into the federal data network by the X-Men in issue #158, which eradicates any record of the X-Men, is referenced for the first time in a long time, used as an explanation for why the Genoshans can find no proof of the X-Men's American citizenship.

Setting up Gambit's later move, Beast recalls the last time the X-Men were in a jam this bad, referencing the Magneto story in issues #112-113. 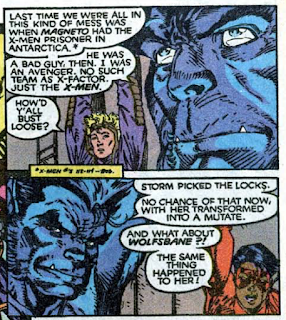 Beast and Banshee also question the veracity of Psylocke. 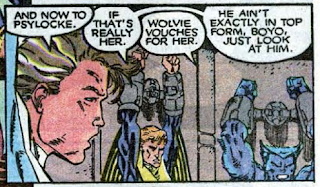 It's stated that Wipeout removing his power has led to Archangel losing control over his wings.

The Awesome and Terrible Power of Cyclops
Immediately after getting his power back, Cyclops starts warning everyone about his optic blast. Thankfully, Chief Magistrate Anderson has a visor for him handy. 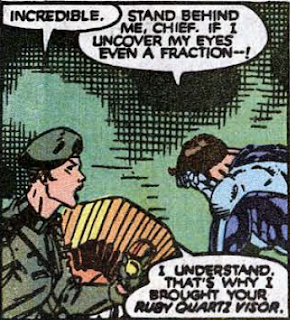 The Best There Is At What He Does
Wolverine is soundly beaten by the Chief Magistrate, who points out that while his bones may be unbreakable, he's still soft flesh around them. 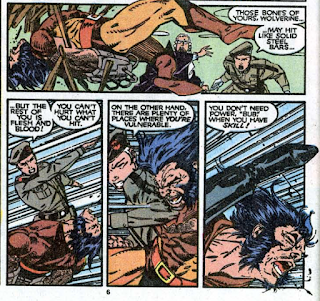 The Best There Is, Mon Ami
Gambit displays some of the charm that will come to define the character as he fights with a Genoshan Magistrate. 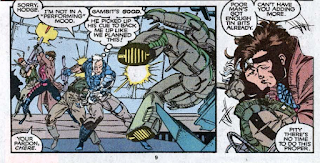 The Cable Guy
Cable's eye and bionic arm are ripped out by Hodge in this issue (something that later information about Cable would suggest borders on something between "deadly" and "impossible"). It's suggested via character reactions that this is a horrific event, though beyond some lip service in future chapters of the story, nothing much comes of it. 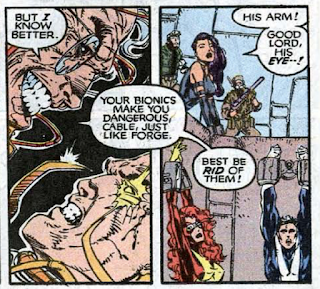 Teebore's Take
Not only is this easily my favorite chapter of "X-Tinction Agenda", it's also one of my favorite issues of X-Men, period. The point at which the events of "Agenda" start turning in the heroes' favor, as they begin to snatch victory from the jaws of defeat and various narrative seeds from earlier in the story start to blossom (the Genegineer's growing dissatisfaction with Hodge and his secret manipulation of Storm), it also features some great action beats (including Psylocke Die Harding it through the air vents, then blasting away at Hodge), character moments (like the X-Men questioning the legitimacy of this Asian woman hanging around with Wolverine calling herself Psylocke) and callbacks to the book's history (the Angel/Wolverine rivalry), one of which (the fight with Magneto in issues #112 & #113) that helps set up the first legitimately cool Gambit moment.

Of course, it helps that it's all drawn by Jim Lee (with the opening splash page featuring most of the characters in their contemporary costumes serving as a pretty great snapshot of the X-books at this time, a nice parting gift to a bunch of looks that will soon be gone), but the combination of action, characterization, history and plot development (on both the micro level of the immediate story and the macro level of the series' narrative) makes for an effective example of what this series is like when it's firing on all cylinders, especially for someone encountering it early in their reading of the series (as I did). It's not quite on the level of "a perfect issue to hook a new reader", but for somebody with a little X-Men experience under their belt when they encounter it, it'll go a long way towards cementing their appreciation for the book.

Next Issue
Tomorrow, the fight against Hodge continues in New Mutants #97, and it ends in X-Factor #62. Next week, Wolverine: Bloodlust.