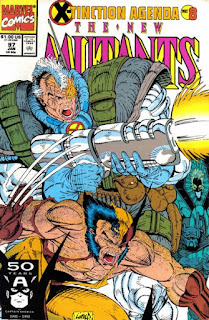 In a Nutshell
The combined X-teams fight back against Hodge, and

Plot
Cyclops holds off Hodge as Storm restores Jean's power, but the three are nearly overwhelmed just an explosion in Hodge's lab causes the villain to flee in a panic, the result of Forge's secret bomb. Meanwhile, Rictor, Boom-Boom & Jubilee trail the Genegineer through his secret tunnel, which emerges into Hodge's lab just as the bomb goes off, killing the tunneling Mutate and knocking out the Genegineer. The three mutants hide with the Genegineer inside the lab as Hodge enters. Placated that his mainframe is still intact, he leaves, and as the Genegineer regains consciousness, Rictor orders him to take them to Wipeout to get their powers back. Meanwhile, Storm reactivates everyone else's powers, as the Chief Magistrate explains that the Genegineer is working against Hodge because he believes Hodge will destroy Genosha. 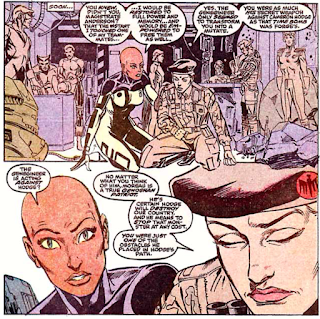 Cyclops splits the group in two, one half to search for Hodge, the other to find and rescue Rahne. Elsewhere, Havok uses the confusion of the blast to free himself from his holding cell, while Rictor, Boom-Boom & Jubilee are attacked by Rahne in the Genegineer's lab. He calls her off, just as Storm, Cable, Cannonball and Sunspot arrive, and Storm is able to restore Rictor & Boom-Boom's powers and partially reverse the Mutate process on Rahne. The group then returns to Hodge's lab and finishes destroying the place, drawing Hodge's attention. The Genegineer blasts him, hoping to kill the creature, but is slain himself instead. However, his attack weakened Hodge enough that the villain retreats. Leaving behind their wounded teammates, Cable, Storm, Rictor & Wolfsbane set off after the injured Hodge, intending to finish what they started.

Firsts and Other Notables
Rahne's status as a mindless Mutate slave is reversed this issue by Storm, the result of another alteration made by the Genegineer when he transformed Rahne initially. However, she is now stuck in some form of wolf, and will revert to a mindless Mutate if she transform back to full human (future issues will also add additional complications to her new status quo). This issue also marks the final appearance of Rahne in New Mutants (she will decide to stay behind in Genosha in X-Factor #62, eventually popping up as a regular member of Peter David's X-Factor relaunch), leaving Sam and Roberto as the only characters left who were around for the first issue of the series. 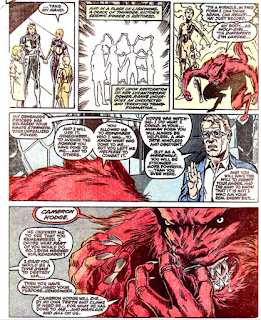 Similarly, this is Louise Simonson's final issue as the series' writer, as she's essentially pushed off the title to give Liefeld more leeway to do whatever he wants. (Liefeld will have plotting credit, along with incoming scripter Fabian Nicieza, for the series' final three issues), making X-Factor the only X-book she'll be writing after this month (not that her X-Factor tenure lasts long past this issue, either).

The Genegineer dies this issue, slain by Hodge when the Genegineer attacks him openly, hoping to kill the villain. 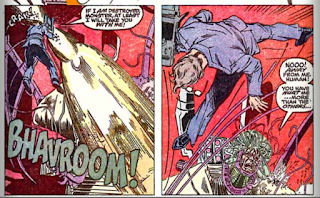 Creator Central
Guang Yap fills in for Liefeld, the first issue of the crossover Liefeld has missed entirely. Yap will pop up in this year's annuals, but otherwise hasn't done much else in the X-universe.

A Work in Progress
The secret bomb, known only to Forge and Cyclops, explodes this issue, having been designed to seek out the technological heart of the citadel before detonating. 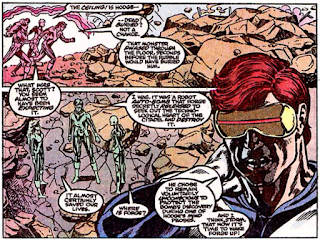 Boom-Boom and Rictor retrieve Warlock's ashes from Hodge's office, and Rahne instructs Boom-Boom to scatter them over Doug's grave if anything was to happen to her. 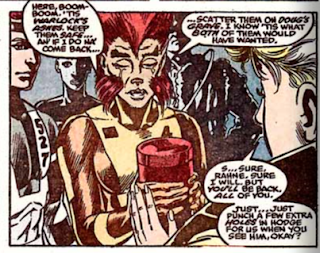 Cable asks Forge to help repair his bionic arm, damaged by Hodge in the last chapter, yet the art doesn't really suggest Cable is that off.

The Best There Is, Mon Ami
In an unintentionally-skeevy moment, Gambit thinks to himself he's not sure he likes the newly-adult Storm as much as the younger one. 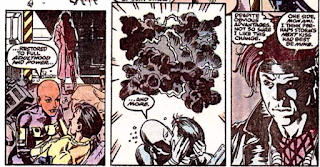 Fabian Nicieza on Louise Simonson leaving New Mutants
"Rob [Liefeld] had a million ideas, and no filter, and no maturity to know how to best present those ideas. So he started to flood ideas to the point where, I guess it was starting to choke Louise's ability to create the book. He wanted it to be muscle and power - and she wanted it to be about a group of kids growing up. And those two things are hard to reconcile."

Louise Simonson on leaving New Mutants
"He [Bob Harras] would change plots, and blame it on the artist. He would change dialogue, and then say, 'I'm sorry, but I tried to call you and you weren't home' or 'I'll be sure and tell you the next time.' He would change some of the dialogue, but not other parts, so the things people said wouldn't make sense. It was his way of letting you know he was wishing you'd go away."

Chris Claremont on Louise Simonson leaving New Mutants
"She got fucked out of a job by Rob."

Teebore's Take
The march towards the conclusion of "X-Tinction Agenda" continues, with the heroes pressing their advantage, finding unlikely allies in Genoshans eager to prevent Hodge from destroying their country, with seeds planted in earlier issues continuing to blossom (here, we get the payoff to Forge and Cyclops' secret bomb from X-Factor #61). But once again, Simonson manages to center this chapter on New Mutants cast members, despite the fact that all the X-teams are essentially intermingling at this point. Cable takes point on a strike team (that ultimately ends up consisting more or less of the remaining New Mutants plus Storm), Boom-Boom & Rictor get reintegrated into the main narrative and, just as last issue featured Rahne's transformation into a mutate, this issue restores her to normal (somewhat), revealing that the Genegineer made additional modifications to her process in addition to the sadistic ones requested by Hodge.

Of course, this also marks the last New Mutants appearance of Rahne, one of the founding members of the cast and one of the few who never experienced a significant absence from the series, something which gets entirely lost in the shuffle of this issue. Granted, the character hasn't yet been written out of the series (within the narrative), and her absence will get some attention next issue, but it's still something a shame that one of the central characters of this series for almost its entire history makes her final appearance without any fanfare, with even the declaration of her departure shuffled to the pages of another series by the structure of the crossover.

Similarly, Louise Simonson  is ushered off the book with no fanfare, a victim of the rising popularity of the soon-to-be Image artists and Marvel's fervent (and ultimately fruitless) desire to keep them happy (and working at Marvel). Something of a divisive presence on the book in her own right, Weezie nonetheless made a significant impact on the series, for good and bad, shepherding the series through some of its most significant changes, from the death of Doug to the departure of Illyana to the introduction of Cable, lasting almost as long as Claremont on the series, putting her own stamp on the character in the process. Not all of her choices were good ones, and her run suffered from editorial interference, the dictates of far too many crossovers, and inconsistent, occasionally dodgy, artwork, but like Rahne, she also deserved a less ignoble departure than quietly leaving the series in the midst of a line-wide crossover.