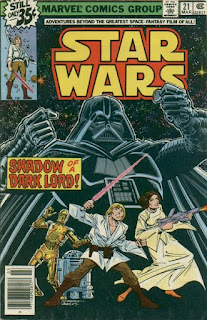 In a Nutshell
Luke & Leia are reunited on the Wheel just as Darth Vader sets course for the same.

Plot
Leia escapes from the Wheel's executive tower, helped by the fact that most of the Wheel's security forces have been dispatched by Greyshade for special duty. Meanwhile, Luke confronts his fears in the form of Darth Vader, regaining consciousness and escaping from the Wheel hospital in the process. Leia, having retrieved Artoo and Threepio from the casino, reunites with Luke, and he explains that he went unconscious when he felt an evil presence through the Force, confirming that Darth Vader is alive. On the planet Ultaar, Vader investigates a destroyed Rebel outpost, learning from one of the survivors that the attack was carried out by Valance the Hunter. 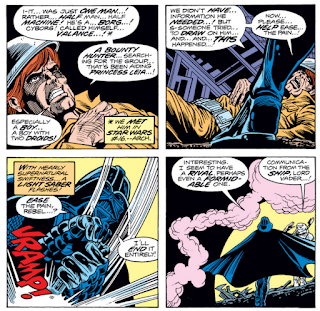 Just then, Vader receives word from his ship that whatever presence he felt in the Force in the area is long gone, and Vader orders the captain to set course for the nearest destination: the Wheel. Back at the station, Master-Com confesses his fascination with Luke's droids to Greyshade, just as Greyshade's security forces attack the lightly-crewed Imperial ship docked at the station, retrieving the money taken by the Imperials. They are unknowingly watched by Luke & Leia, who resolve to follow and find out where they're taking the money. Meanwhile, Han prepares for his next fight, not yet having earned enough to cover his expenses on the station, but when he enters the arena for the main event, he discovers to his horror that Chewbacca is one of the contestants.

Firsts and Other Notables
Darth Vader, last seen escaping the destruction of the Death Star at the end of issue #6, makes his triumphant return to the Star Wars comic book this issue, as Luke confirms to Leia that Vader is indeed still alive (and confirms to any readers who didn't pick up Splinter of the Mind's Eye that Vader is still around post-Star Wars, something the ending of the film certainly suggested but was in no way a given at the time). 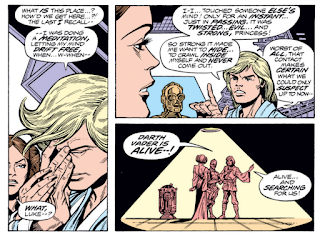 Vader is seen investigating an attack on a Rebel base that was perpetrated by Valance the Hunter, putting Vader on the track of both Luke (the unknown-to-him pilot who destroyed the Death Star) and the droid-hating cyborg bounty hunter from issue #16.

A Work in Progress
This issue finally reveals what knocked Luke into a coma in issue #18 (thus kicking off the whole Wheel storyline), that he felt Vader's presence in the Force while meditating, which basically triggered his own fears and shut down his mind while he worked it all out. 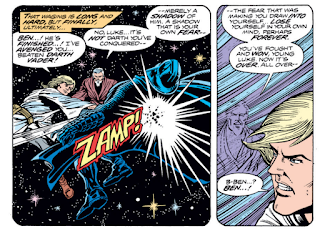 Um, Actually
Though Vader chides him within the comic itself, it still seems wildly out of character for an Imperial officer to speak so casually to Vader, not just given Expanded Universe stories but even just the way he interacts with the military in Empire Strikes Back, but it makes a little more sense given how relatively subservient Vader was to Tarkin in Star Wars, which is pretty much the only point of reference at this point.

Also, the implication here is that all Force sensitives are extremely rare at this point, but the later Expanded Universe will suggest it's less about them being extinct and more about many of them simply hiding in fear of the Empire. And, of course, at this point in time, no one knew yet that the Emperor would be Force sensitive as well.

That 70s Comic
Artoo is said to be recording the reclaiming of the Wheel's money by its security forces from the Empire on tape.

Teebore's Take
Whether it came about due to an edict from LucasFilm or was just a decision made by the creators, the choice to hold Darth Vader back from the licensed Star Wars comic book for over a year after the movie adaptation wrapped was a smart one. Even in the days before The Empire Strikes Back and the creation of Star Wars as not just a film, but a franchise, he was this universe's Big Bad, and needed to be used sparingly in order to protect his impact: if Darth Vader gets defeated by the Rebels six times between each movie, it makes his threat to the Rebels seem less significant (this is something licensed Star Wars fiction continues to grapple with to this day, something of which the producers of Rebels have said they're very much aware).

As a result, this issue marks Vader's first appearance in the comic since spinning off into space in issue #6, and his presence immediately livens up a story that was just starting to sag a bit in the previous chapter. Putting Vader on a collision course with events on the Wheel immediately raises the stakes for the main characters in a way nothing else could, and adds an entire new level to the question of "how are they going to get out of this mess?" already running through the story.

That Vader is introduced via an interlude that also reintroduces Valance the Hunter is all the better; less significant for its impact on Star Wars as a shared universe, it does contribute to the sense of the Star Wars comic book as a thing unto itself; like the repeated usages of Crimson Jack and Jaxxon, it goes a long way towards building the sense of a shared universe within the pages of the comic book, that these aren't just a loose collection of stories featuring recurring characters, but chapters within a larger shared narrative, in which characters and plotlines and themes weave in and out of focus as each issue moves the overall narrative forward.

Next Issue
Han vs. Chewie!