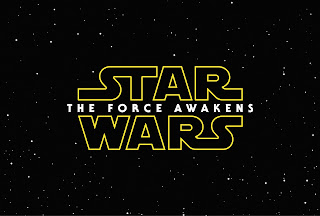 Unless you've been living in a cave on Mars with your eyes shut and fingers in your ears, you know that this week saw the release of the first (and likely last) full trailer for The Force Awakens.

Not surprisingly, I had some thoughts.

The Music
I've seen conflicting reports as to whether or not the music used in the trailer was composed by John Williams, but either way, it's simply fantastic. The way it seamlessly transitions from tinkly and full of mystery as Rey explores the Star Destroyer, to a full-on funeral dirge as Kylo Ren (seemingly) addresses Vader's charred mask, to an ethereal chorus as the Falcon flies over Jakku is pretty astonishing. And I love that the Falcon shots sample the music from the very end of Empire Strikes Back (the "Rebel fleet" cue), which is a great little melody that doesn't get reused often enough.

One of the great things about this trailer is that it focuses more on moments, on characterization & theme, than plot - we really don't know a whole lot more about what actually happens in the movie than we did before (which shows an admirable level of restraint for Disney, though I suppose it's easy to do trailers "right" for a movie that sells itself and already has an enormous marketing campaign behind it). Following on the heels of the earlier teasers, this trailer really cements the roles of the three (presumed) main characters in relation to the original trio of main characters: Rey is the Luke, the listless blue-collar worker on a remote planet, yearning for something more. Finn is the Han, the conflicted warrior looking for a cause. And Poe is the Leia, the one member of the trio already entrenched in the formal Rebel hierarchy (and who looks to get tortured as well).

But what this trailer also does well is suggest ways the new trio could fit into different archetypes, and thus, become richer characters: Rey seems like a more jaded, weathered person than Luke was initially (shades of Han), and the initial shots of a masked, staff-carrying Rey recall Leia's Boush disguise from Return of the Jedi; the shots of Finn wielding a lightsaber, while not an absolute guarantee that he's Force sensitive, at least suggests the possibility that he could end up on a similar path to Luke, and his jacket is very similar to the one worn by Luke at the end of New Hope (and in Marvel's current Star Wars series); and the shots of Poe flying an X-wing call to mind both the more "high adventure" aspects of Luke and the seasoned warrior side of Han. 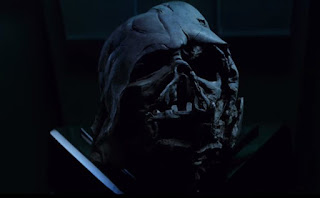 This trailer certainly seems to suggest that Kylo Ren is both an admirer of Darth Vader and the one in possession of Vader's crumpled, charred mask, but it's important to note this could be a trick of editing. The dialogue is clearly Ren's, but the shot of the mask could be from somewhere else in the film entirely, leading us to believe Ren is speaking that line to the mask when he's not. 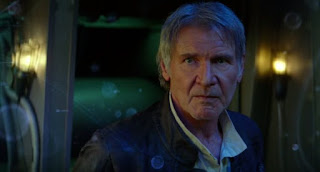 A few things about this much-discussed line of dialogue from Han.

1. It's "a Jedi", not "the Jedi".
2. The line certainly seems to suggest that, unlike what happened in the old Expanded Universe, the canonical post-Jedi years did not see a resurgence of the Jedi as Luke slowly but surely rebuilt the Order and/or the real truth about what happened aboard the second Death Star, that a Jedi returned and helped destroy the Emperor, isn't public knowledge throughout the galaxy, possibly because the remains of the Empire are still strong enough to suppress the truth. Either way, this strongly implies that the details of the events of the Original Trilogy are as shadowed in mystery to the general public of the Sequel Trilogy as the events of the prequels were to the public of the Original Trilogy, which is an interesting choice to make.
3. It's definitely telling that it's super-cynical Han, of all people, delivering the line about how everything involving the Dark Side and a Jedi is true. Again, characterization is a focus along with everything else going on in this trailer.

Just love that little bro-pat Poe gives Finn as they seemingly prepare for battle. Says a lot about the state of their relationship at that point without spoiling anything specific.

Our first full shot of Leia (assuming she was the one holding Luke's old lightsaber in the earlier teaser) has her tearfully embracing Han, giving hope to us Expanded Universe fans that at least some of the core ideas put forth there may make it into the new canon (that is, it's still possible they did remain together and/or get married after Jedi).

Pulling back from earlier-released shots featuring a lightsaber-wielding Finn facing off against Kylo Ren, we can now see that Ren is unmasked for at least part of that confrontation (and channeling Jon Snow a little), which suggests that, unlike Vader, his mask is something he chooses to wear and not something required to keep him alive, which is a smart choice (not ALL Star Wars villains need to be part robot, desperately clinging to life via the aid of machines, and it strengthens the idea of his devotion to Vader if he wears a mask in honor of him, rather than because he has to).
Newer Post Older Post Home
Posted by Austin Gorton at 12:00 PM