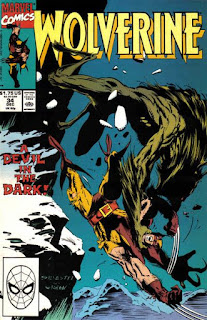 "The Hunter in Darkness"
December 1990

In a Nutshell
Wolverine fights the Hunter in Darkness

Plot
Getting back to his roots in the Canadian Rockies, Wolverine is met by two RCMP officers who are tracking an escaped killer named Athabasca Ike who has taken a young woman hostage. The older Mountie, Doolin, to whom Wolverine seems familiar, is initially suspicious of him, but they accept his help when he catches Ike's scent on the wind. They track him deeper into the mountains, but with the sun at his back, Ike spots their approach, and shoots the younger Mountie, killing him and disabling their jeep. Stranded and with night falling, Doolin gives Ike up as lost, but Wolverine insists he can track them. As they hunt for the killer, they're stalked by the Hunter in Darkness, a large feral creature believed to be legend, whom both Wolverine and Doolin have encountered in the past. 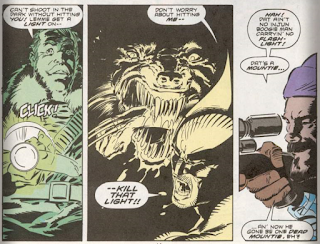 The Hunter attacks Wolverine, prompting Doolin to turn on his flashlight. Wolverine yells at him to turn it off, but Ike uses the light to shoot Doolin, who has realized that Wolverine is the corporal who led him into Normandy during WWII. With Ike distracted, his hostage tries to escape, drawing the notice of the Hunter in Darkness. Ike chases after her, but when he turns on his lighter to see better, the Hunter emerges from the darkness, killing him. Later, Wolverine returns to Doolin with the young woman just as Doolin calls out "Logan" with his final breath, leaving Wolverine to wonder how he knew his name.

Firsts and Other Notables
This issue marks the first appearance of the Hunter in Darkness, a creature believed to be legend but who actually exists in the Marvel Universe. He's basically a big, savage, bipedal wolf (kind of like Wendigo without the "transformed by cannibalism" angle), and will pop up again periodically throughout Hama's run. 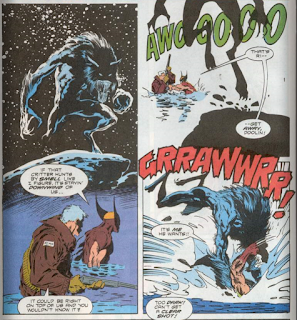 This issue is also the first instance of Hama dropping hints about and exploring Wolverine's past, something that will become a hallmark of his run. Here, we learn that Wolverine was a corporal in the Canadian army in WWII, and parachuted into Normandy as part of the D-Day invasion, a detail that I believe has stayed mostly consistent despite all the various retcons to Wolverine's past. 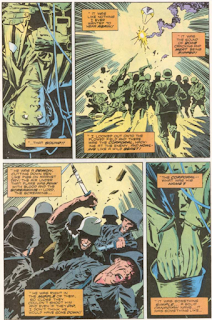 Teebore's Take
Granted, it's only the fourth issue of their run, but this is easily the best Hama/Silvestri issue yet, a marked achievement for a done-in-one, and it reads very much like Hama's later work on the series, telling a self-contained story that still resonates thanks to the sprinkling in of little tidbits from Wolverine's past and/or using established villains instead of original creations that will never be heard from again. Hama also shows off an almost Claremontian ability to quickly flesh out one-off supporting characters in this issue, with nearly everyone coming across as a unique individual despite limited page time (the one exception is the female hostage, who is little more than a female hostage throughout the story). Doolin, the older Mountie who served in WWII with Wolverine obviously benefits the most, but even his short-lived partner feels like an actual character, not just cannon-fodder. Silvestri gets to have some fun as well, playing with shadows and light to create a moody, horror movie-like atmosphere (recalling his work on the Brood story "Earthfall" in Uncanny X-Men), and the end result is an eminently satisfying done-in-one.