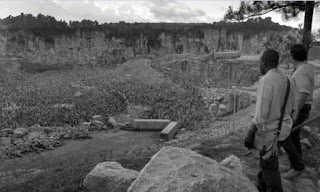 I recently read an article from Cracked about anime. The part of this article I thought of when watching the season premiere of The Walking Dead, "First Time Again", was where Daniel Dockery  discusses anime series that never have a season break. Daniel posits that season breaks help bad series continue longer than they should. Basically, over the break people forget how bad a series is and\or hope the series will improve next season. I’m not saying this is the case with The Walking Dead but I think this episode would come off much different if not for the break.

The Walking Dead used the season break to skip ahead in time. Suddenly Rick’s group and the Alexandrians are more-or-less on the same page. They have a mission to move a giant hoard of zombies trapped in a quarry to some other undisclosed location. Frankly, seeing a bunch of people working together to form and enact a plan to deal with a zombie threat is a refreshing change for this show. So naturally, in true The Walking Dead fashion, defeat is snatched from the jaws of victory when some unknown entity (*cough* The Wolves *cough*) use a truck horn to lure the zombie horde back to Alexandria.

All in all, this wasn’t a bad episode but it’s placement in the series’ narrative is a bit suspect. Last episode things came to a boiling point in Alexandria. There was a town meeting to discuss kicking Rick out and it ended with a zombie getting within the walls, murder and an execution. In the very next episode everyone is working together.

We do get conveniently color coded flashbacks to catch us up but if this were a better show it wouldn’t need to use brief flashbacks as a cheat code to fast forward character development. They could've used an episode or two and show us the characters disagreeing, figuring each other out and ultimately trusting one another. In the hands of capable writers that could be very interesting to watch unfold. Instead, we only get a few brief scenes showing Glenn going from nearly being murdered by Nicholas to Glenn pretty much trusting him. (We get similar scenarios with Morgan quickly going from captive to trusted and Tobin dealing with his father's death.)

Then again, that's if this was a better show. We've seen The Walking Dead spend a lot of time on character work and it's not pretty. A couple of episodes dealing inwardly with a focus on characters would probably end up being boring and frustrating.

So maybe I should be happy with the show skipping past true character development and showing us humans smartly working together to deal with a zombie threat. Those are the most entertaining parts of this show anyway. Besides, the season break makes the plot skipping ahead much easier to accept.

Other Thoughts:
Sorry for the lateness of this post. I’m in the process of moving and thus finding very little time to write.

Another problem with season breaks is I have a tendency to forget what the hell happened at the end of last season. It took me a while to get caught up with where each character was left off.

Remember Father Gabriel and him ratting out Rick? That plot went places...

So Deanna just immediately trusts Rick because...she's shutting down and it's just easier to let him deal with everything?

So was switching between color and black and white for flashbacks artistic or just the production staff assuming the viewers are morons? I assume it’s the latter in the guise of the former.

Rick is being as xenophobic as ever. At least Daryl is on the opposite side. I knew I liked him for more that just being a bad ass!

Speaking of people I like, Morgan is fast becoming my favorite.

So, the Alexandrians forgo scratching and clawing for survival, murdering for the greater good and antagonizing anybody who may or may not be slightly perceived as a threat and instead just build a wall to protect themselves from zombies and then bring people in and help each other out. Since that’s not nihilistic the Alexandrians can’t be considered intelligent and a different kind of survivalist so they're instead considered lucky. Now this quarry shows up just to hammer that point home.

We are introduced to and say goodbye to Carter. He doesn’t like Rick which means he’s not equipped to live in the zombie apocalypse. His fatal flaw was…running too fast or something? OK, he didn’t immediately fall in line with Rick so that’s means you’re karmically dead.

Carol didn’t do too much here but they it’s evident that the writers LOVE her.

I get that Rick had to kill Carter but it really shouldn’t be that easy for him to do it.

I will say, there’s a lot of talk from Daryl and Morgan that Rick maybe needs to come back from his paranoid, xenophobic ways. Hopefully the story arc is Rick softening and not Rick being proved right and hardening Daryl and Morgan.
Newer Post Older Post Home
Posted by Dr. Bitz at 9:56 PM