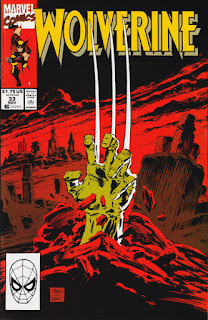 In a Nutshell
Wolverine foils Dai-Kumo's plans and defeats Goro.

Plot
Tyger Tiger and Archie try to bring Wolverine's body into Japan, but Dai-Kumo, who controls the custom agents, refuses to let them and, believing Wolverine to be truly dead, claims the body for himself, in order to have him buried in a place of honor as a worthy foe. Later, Dai-Kumo and Dr. Malheur create the final batch of Raiden the Thundebolt, then kick off a party in celebration. Back at the cemetery, Wolverine, whose death-like state was the result of a drug given to him by Tyger Tiger, wakes up and claws his way out of his grave, where Reiko is still waiting. She directs him to Dai-Kumo's mansion, where the party is in full swing. As a demonstration of the Thunderbolt's power, he sets a drugged wolf against a trio of starving tigers, just as Wolverine bursts into the mansion. 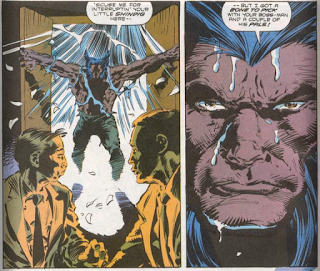 He and the animals make short work of Dai-Kumo's goons, and Wolverine chases Malheur into the drug processing facility, where the two fall into the chemical vat containing the drug. Wolverine emerges to find Goro waiting for him. Goro, who believes Wolverine, having risen from the grave, is prophesied to kill him, takes the Thunderbolt and attacks, but Wolverine simply slashes his legs and leaves. Returning to the party room, he finds Dai-Kumo dead, slain by Reiko, just as Tyger Tiger and Archie arrive, expecting to help Wolverine but finding him not in need of any. The three fly back to Madripoor, taking solace in the fact that at least Reiko was able to get out of a bad situation.

Firsts and Other Notables
The conclusion to Hama and Silvestri's first story arc marks the final appearances of most of the new characters involved in it: Dai-Kumo, Malheur, Reiko, Goro.

In yet another hallucination, Jean Grey pops up again briefly. 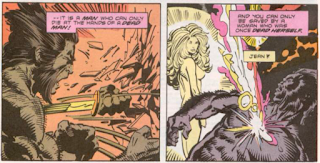 A Work in Progress
Dai-Kumo goes into his whole spiel about how Raiden the Thunderbolt will kill its users, thus having the added benefit of ridding society of drug users, which seems like a bad business model, no matter how much he charges for the drug. 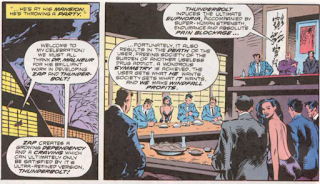 The Grim 'n' Gritty 90s
As with the previous issue, this one contains another somewhat hamfisted PSA about drunk driving.

Artistic Achievements
Silvestri turns in a pretty great image of Wolverine clawing himself up out of the grave. 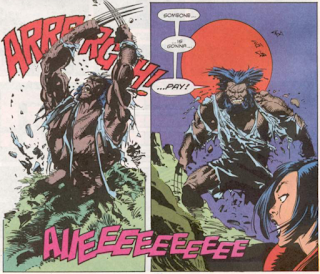 The Best There is at What He Does
Wolverine does the old "stare down an wild animal by the sheer force of his own bestial nature" to a wolf that's been given the Thunderbolt. 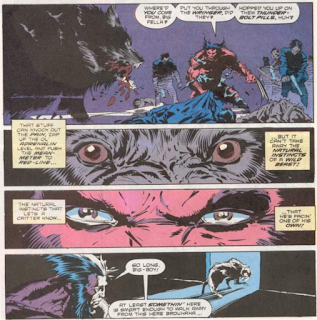 Teebore's Take
Hama & Silvestri's first arc comes to a close, on a macro level rather perfunctorily (Dai-Kumo is defeated and the Thunderbolt drug destroyed), but on the micro-level there's a couple of fun surprises in this one: first, the obvious setup of Tyger and Archie to come in at the last minute and help Wolverine turn the tide gets subverted, with the pair showing up just as Wolverine finishes taking down the bad guys. Secondly, the even more obvious setup of Wolverine slaying Goro, who believes he can only be killed by a dead man, gets sidestepped by Wolverine's nonchalance about the whole thing; he doesn't even care enough to kill Goro, someone who did his best to kill Wolverine (and believed he succeeded) twice, which is a pretty great piece of characterization on Hama's part.

This story as a whole is unlikely to show up on anyone's "Best Wolverine Stories" list, as it's ultimately far too generic and repetitive - too many savage fights with faceless goons, too many loopy hallucinations (this issue squeezes in yet another) - but it is nonetheless an entertaining showcase for the new creative team. It doesn't shake-up the status quo nor take the title character in a bold new direction, but it does inject the series with a dose of much needed creative consistency, not just from knowing this team will be sticking around for awhile, but in maintaining a level of quality issue-to-issue across the three-part story. It may not be an all-time great, but it provides a solid foundation on which the new creative team can build.