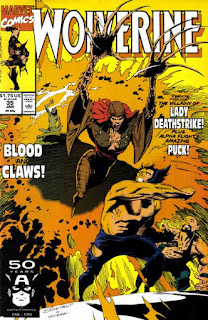 In a Nutshell
Wolverine, Puck & Lady Deathstrike get sent back in time to the Spanish Civil War.

Plot
In Vancouver, Wolverine visits Puck, who's filling in for a friend as a bouncer at a local bar. Meanwhile, Lady Deathstrike attempts to track Wolverine down, starting at Dai-Kumo's abandoned mansion in Osaka, where she ends up killing a pair of cops, learning from their database that Wolverine entered the country from Madripoor. Contacting Pierce, she's returned to Australia by Gateway, then immediately sets out for Madripoor. There, she confronts Tyger Tiger and, by threatening one of the waitresses at her casino, learns that Wolverine is in Vancouver. Just then, he and Puck are fishing, and Wolverine finds a picture of Puck with Ernest Hemingway, along with Inez, a woman whose name Wolverine somehow knows. Puck asks him if he was ever in Spain in 1937, as that's when and where the picture was taken. Wolverine doesn't think so, but says he can almost see the place, just as Lady Deathstrike, back in Australia, orders Gateway to send her to the place that Wolverine gazes upon at that moment. 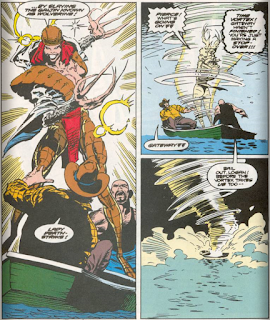 Suddenly, she appears in Puck and Wolverine's boat, but moments later is sucked into a time vortex created by Gateway that pulls in Wolverine and Puck as well. The two heroes manifest in the middle of a bullfight during the Spanish Civil War, an event Puck remembers attending, along with Hemingway and Inez. Just then, the crowd is dive bombed by a rebel plane, and everyone flees. Hemingway tells them they're in Guernica, and though Puck remembers being there, he doesn't remember Wolverine being with him. In the midst of the ongoing bombing, Puck and Wolverine decide to leave town with Hemingway, to meet up with Inez's partisan band in the mountains. Meanwhile, Lady Deathstrike is confronted by a squad of Nazis, who believe that she is a Republican partisan, and thus, is to be hung from the nearest telephone pole.

Firsts and Other Notables
Alpha Flight's Puck, like Wolverine a similarly long-lived Canadian superhero, guest stars in this issue (and the rest of the story). Notably, when transported to 1937, Puck regains his normal height. 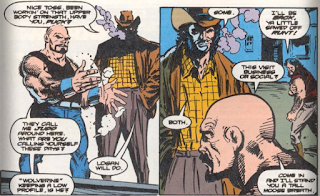 Lady Deathstrike pops up to serve as the chief antagonist of this story. In a nice nod to internal continuity, she tracks Wolverine from Osaka and the events of issues #31-33 back to Madripoor, where she encounters Tyger Tiger before triggering the time warp that sends everyone back to the Spanish Civil War. 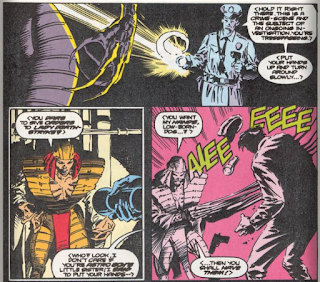 She is joined, briefly, by Pierce and a few of the other Reavers, as well as Gateway. 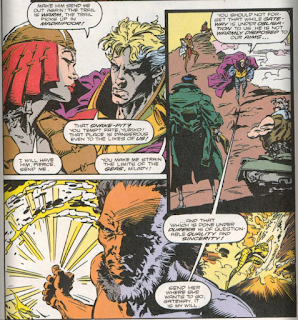 In 1937, Puck is friends with novelist Ernest Hemingway (aka Dr. Bitz's default answer whenever the Final Jeopardy category is something like "20th Century American Authors"), who (in real life and this story) is a journalist covering the Spanish Civil War, an experience which informed his novel For Whom the Bell Tolls, and when Puck & Wolverine arrive in the past, they do so in the midst of a bullfight, the sport around which much of Hemingway's The Sun Also Rises is constructed. Hemingway will continue to play a role in the rest of the story. 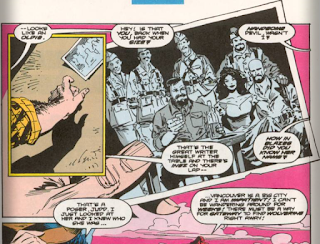 A new masthead debuts this issue, giving a general lowdown on Wolverine and what his deal is.

A Work in Progress
Lady Deathstrike is able to interface directly with a computer, something I don't think we've ever seen her do before. 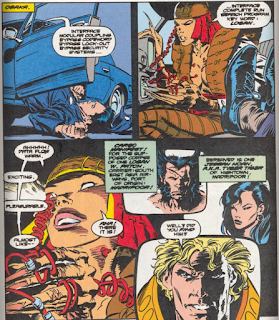 Pierce says that while Gateway is beholden to do as the Reavers say (for still unknown reasons), he doesn't like it, and thus, the Reavers must be very careful and precise in how they phrase their orders to him. 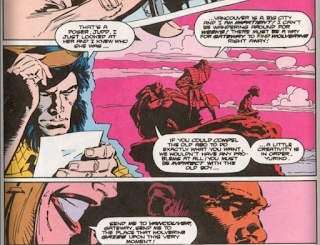 The Reference Section
Wolverine and Puck are in Guernica, Spain, the setting of one Pablo Picasso's more famous paintings, prompting Hemingway to reference his time in Paris with Picasso and Gertrude Stein (amongst others), members of the Lost Generation of artists who came of age between the world wars. 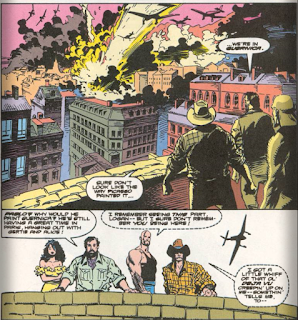 Teebore's Take
I've never read the story which begins in this issue before, but I have read about it, and I am pleased with how it's beginning. In all honesty, it's the first issue of this series to feel like what I've always expected a Wolverine solo series to feel like, in that it marries the pulpy tone the book successfully and consistently achieved throughout its run to characters and situations that are specific to Wolverine: in Puck and Lady Deathstrike, this story gives Wolverine an ally and an antagonist that share history with the character, in a way few supporting cast members or villains have thus far (arguably only Karma & her uncle, Tyger Tiger, who gets the nod on a technicality, and Sabretooth in his one-issue appearance were culled from the greater history of Wolverine and the X-books, with nearly every other supporting character or villain in the series being one-offs, new creations or pulled from other corners of the Marvel Universe). Here, finally, is a story involving Wolverine interacting with characters with whom he's had significant interactions and/or a shared history with prior to the start of the series.

The tone of this story, meanwhile, maintains the pulpy feel of earlier issues, though most of the trappings here (time travel, cyborgs, Nazis) definitely skew more comic book-y than the series' now-standard adventure serial vibe (though the bull-fighting element definitely matches the traditional machismo of earlier stories), which adds to this feeling more like an issue of a traditional comic book series. But, after introducing the idea a bit in the previous issue, this story is also where Hama really starts playing with Wolverine's history, and the idea of him as a time traveler. Not just a literal one (going back from the present to a time in the past), as in this story, but just the fact that thanks to his longevity, Wolverine has seen a lot and been around for significant historical events.

It's not just about revealing bits of his personal backstory that had previously been so shrouded in mystery (though there's definitely some of that in play, here and later in Hama's run), but about emphasizing that Wolverine has a lot more personal history than most characters and thus, that a lot of interesting stories can be culled from that, and about not being so afraid of demystifying the character's past that his past can't be used as the basis of any stories at all. Ultimately, the exploration of that aspect of his character, which will dominate especially the first half or so of Hama's run on this title, along with the presence of characters with significant ties to Wolverine specifically, makes this issue feel like the true start of what a Wolverine ongoing series should be.