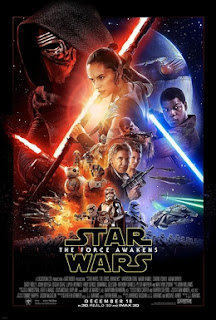 One more Force Awakens post before we return to the comic book Wheel saga, this one taking a closer look at two popular fan theories regarding the upcoming film that have been banging around the internet for awhile now (and gained additional traction/attention in the wake of the release of the final trailer for the film). Note: I'm mostly working only off of the teasers/trailers, some info gleaned from merchandise (like the toys) and some vague internet scuttlebutt (I haven't even read the big EW article on the movie, though my brother passed along a few details from it), but if you're a complete spoilerphobe or just trying to avoid any lengthy ruminations on the movie at this point, consider this your official spoiler warning and suggestion to not read below the cut. 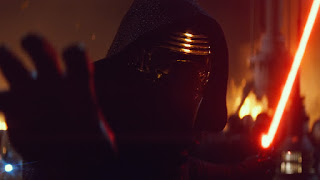 Pros
1. Luke has been kept curiously hidden from most of the movie's marketing material. Of the original trio, Han has been front and center, and Leia's made a couple appearances. Luke, however, has only appeared once (albeit the same shot has been reused a couple different times), patting Artoo on the head with his robotic hand while sitting next to a fire (and it's not even clear if that is Luke or not). The argument goes that this is because Abrams is planning on some kind of big reveal for Luke. Big reveal=he's evil!

2. Kylo Ren and the Knights of Ren are masked. So while Adam Driver is clearly playing a Knight of Ren in some capacity, it's still possible Luke is playing Kylo, or some kind of Emperor-esque figure to Kylo (and we haven't seen anything of Supreme Leader Snoke yet, either), setting up a "remove the mask, it's Luke!" kind of moment.

3. Abrams likes to be coy about this kind of stuff and play with fans. He insisted prior to the release of Star Trek: Into Darkness that Benedict Cumberbath wasn't playing Khan, but he was.

4. Abrams has said in interviews that he was convinced to direct the movie when Lucasfilm head honcho Kathleen Kennedy asked him, "Who is Luke Skywalker?" Intrigued by exploring that question, he signed up. Presumably, the answer is something other than "a really good guy helping bring back the Jedi and fight evil across the galaxy", or else Abrams wouldn't have been intrigued enough to take on the project.

5. Luke has turned to the Dark Side before, in the pages of the Dark Empire comic book series (one of the earliest Expanded Universe stories).

Cons
1. Lots of characters haven't appeared in the trailers. Just because we haven't seen much of Threepio doesn't mean he's gone evil.

2. While not a huge star, Adam Driver is a name actor, and something of a rising star who has been positioned by the film's marketing as the central antagonist of this movie. It seems unlikely he'd be cast and announced as Kylo Ren just to obfuscate a reveal of Luke as Ren.

3. There's a difference between saying "Cumberbatch isn't Khan, just kidding he is!" and setting up an elaborate ruse in which an actor is hired and announced as playing a key character just to disguise a plot twist in the movie. Beyond that, the actor has conducted interviews discussing how he's playing the character, and film critics that have seen footage have referenced Driver's performance as Kylo Ren (meaning they too would have to be in on the ruse, when they have no reason to be). Also, no other Abrams project had the level of merchandising involved that this film does - there were no Cloverfield monster toys, no Super 8 visual dictionaries, no "I'm Totally Not Khan" Khan action figures, etc. Meaning that if Abrams is overtly lying, he's doing it to a ton of Lucasfilm corporate partners in addition to fans, which seems unlikely.

4. While "evil" is one answer to the question of "Who is Luke Skywalker?", there's lots of other answers, too, many of which have the potential to be just as intriguing (if not moreso) than "evil".

5. Just because the EU did it, doesn't mean Abrams did. If anything, the EU doing it is more of a con than a pro.

Final Analysis
Obviously, I don't put much stock in this theory. Most of its proponents fall back on Luke's absence from the trailers and Abrams' history of playing fast and loose with the audience as their chief points, and while I concede there's probably a reason Luke has been held back from the marketing, that doesn't automatically mean it's because he's evil. Ultimately, I think making Luke a bad guy is a little too obvious, in part because it has been done before, and in part because it's a really cheap way to generate thematic resonance ("he went bad just like his dad did!") between the trilogies.

As always, it of course will come down to execution, but turning Luke evil also runs the risk of undermining the triumph of Return of the Jedi, that instead of saving his father from the Dark Side, Luke ultimately just supplanted one evil tyrant with another, something which could do a lot to piss off Original Trilogy fans (and so far, this movie seems aimed squarely at winning back OT fans burned by the prequels). It seems very unlikely that Kylo Ren specifically will be Luke, but I certainly won't be surprised if it turns out that Luke is evil, even as I freely admit that's not something I'd prefer. Nevertheless, I just don't see that happening. 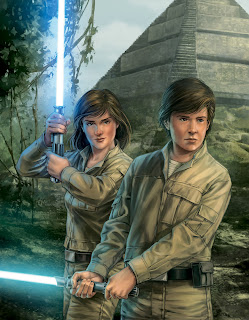 Pro
1. Set roughly thirty years after Jedi, the actors playing both parts are the right age to be children born shortly after the Battle of Endor.

2. The most recent trailer heavily implies that both Kylo Ren and Rey are Force sensitive (Ren is seen seemingly using the Force, while the voiceover narration seems to be talking to/about Rey).

3. While it's been revealed that "Ren" is more of a title/classification than a true name, both "Rey" and "Ren" are, visually at least, similar names.

4. Revealing that the ostensible villain and one of the main protagonists are related adds some thematic weight to the conflicts in the film, and parallels the similar Vader/Luke reveal/familial ties of the Original Trilogy.

5. There's Expanded Universe precedent in the idea of Han and Leia having Force sensitive twins, and even a notable storyline that pitted one against the other, who had fallen to the Dark Side.

Con
1. While a cute idea, there's nothing concrete to suggest any relationship between Rey and Ren at this point, just circumstantial evidence like "they're the same age" (aka the age Hollywood wants most of its main characters to be) and the fact that revealing previously-unknown familial relationships is kind of a thing for Star Wars.

2. One brief teary embrace aside, there's nothing to suggest Han & Leia even remained together after the events of Jedi, let alone had kids.

3. It's been done before. It seems unlikely that LucasFilm would wipe out the entire EU only to bring back one of the more notable elements of it (Han and Leia's kids), just in a slightly different form.

Final Analysis
Admittedly, as an EU fan, I want this theory to be true moreso than the "Luke is evil" one, so I'll be pleasantly surprised if it comes to pass, but I don't think it will (I think "Luke is evil" is far more likely to be true than this). That said, I have very little doubt that SOMEONE in this movie will turn out to be secretly related to somebody else; whether Kylo Ren is Luke's son or Rey is Luke or Leia's daughter or even that Rey & Ren are the Solo twins after all, there's going to be a family element to the story, because that's what Star Wars is all about.

The first six films are the story of Anakin Skywalker, and while his tale has been told, there's no way the sequel trilogy won't continue it in some way via a grandchild or relation of some kind, whether that child comes from Luke or Leia. Certainly, the Skywalker family connection could come later in the trilogy via another character, and it's entirely possible (in fact, likely) that any familial reveal will be held until the second or third films in the trilogy (a la the Vader reveal in Empire or the Leia reveal in Jedi), but it seems doubtful that at least one of the four main characters being introduced in Force Awakens won't turn out to be a Skywalker of some sort.

Even if Rey and Kylo Ren aren't the Solo twins after all.
Newer Post Older Post Home
Posted by Austin Gorton at 12:00 PM