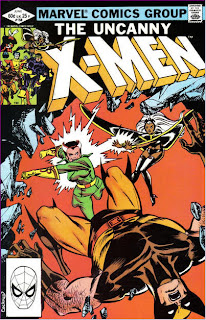 In a Nutshell
The X-Men fight Rogue inside the Pentagon.

Plot
On the X-Men's base in the Bermuda Triangle, Carol Danvers spars with the Starjammers while Dr. Corebau runs a series of biological tests on her. Meanwhile, Oracle of the Imperial Guard attempts to telepathically wake Professor X from his coma. Scanning his mind, she is overwhelmed by the presence of great evil in his consciousness. When she attempts to withdraw, Xavier subconsciously takes control of her mind and tries to user her power to kill himself before Wolverine severs their connection. Just then, Kitty draws the X-Men's attention to Senator Kelly, who is appearing on TV denouncing mutants in general and the X-Men in particular. Moira worries that the government might be able to track down the X-Men via the information Professor X shared with the FBI back when he was working with them, and Kitty suggests having the Starjammers create a virus capable of erasing all references to the team from the federal databases. 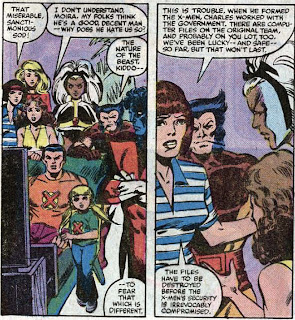 With the help of Carol Danvers and her Air Force credentials, Wolverine and Storm are able to infiltrate the Pentagon in order to upload the virus. However, inside the building they encounter Rogue, and a fight breaks out. As the X-Men battle Rogue, Carol sneaks off to take care of the virus, but she's followed by Mystique, at the Pentagon in her secret identity. Mystique shoots Carol, but the bullet only grazes her, and she's able to overpower Mystique. In the halls of the Pentagon, the X-Men are holding their own against Rogue, and Storm is able to create a tornado which smashes Rogue through the roof of the building and sends her away. The X-Men hastily leave the building as Mystique is arrested by military police and Carol uploads the virus, taking the opportunity to erase her own files  Outside, Carol rendezvous with the X-Men, confirming that as far as the federal computer network is concerned the X-Men have ceased to exist, while also feeling that she's finally ready to start her life again.

Firsts and Other Notables
Though she's previously appeared elsewhere, this marks the first appearance of Rogue within the pages of X-Men. Though she'll go on to join the team and become only the second X-Man Claremont had a hand in creating, here she is still a member of Mystique's Brotherhood of Evil Mutants and a full-on villain. 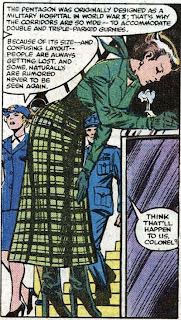 Mystique also pops up again, and we see her in her secret identity as Raven Darkholme, deputy director of the Defense Advanced Research Projects Agency. 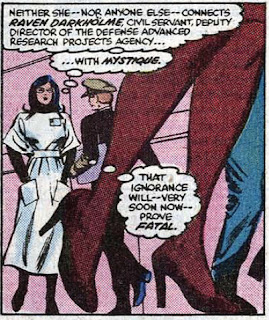 In a nice bit of (probably unintentional) foreshadowing, Storm worries that the casual presence of Rogue at the Pentagon could mean that the Brotherhood of Evil Mutants is working with the government.

In a call back to their relationship with FBI Agent Fred Duncan during the Silver Age, the X-Men release a virus into the government's databases that erases all references to them (and will erase any future references as well).

Imperial Guard telepath Oracle attempts to bring Xavier out of his coma and encounters a malevolence inside him, another reference to the Brood Queen egg inside Xavier. 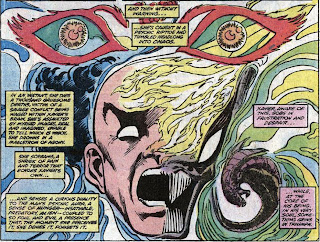 To stop it, Professor X goes so far as to take control of Oracle and attempt to kill himself via psibolts. 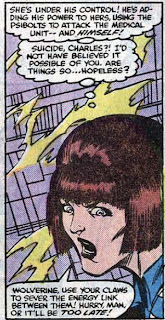 Havok is introduced to Corsair and told Corsair is his father. A footnote mentions that future issues of Marvel Fanfare will reveal why Mystique hates Carol Danvers so much, but as far as I know, that story has never been told (at least not in Marvel Fanfare).

A Work in Progress
Moira's hanging with the X-Men in the Bermuda Triangle, presumably leaving Banshee to mind the store back on Muir Island.

According to tests conducted by Peter Corbeau, though Carol Danvers has lost her superhuman abilities, her body is still functioning at peak human capacity.

Carol explains that she alternatively carries the rank of major and colonel in the Air Force, depending on her mission, which I believe is an attempt by Claremont to explain away past discrepancies in her rank. 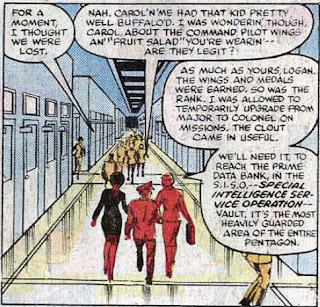 Nightcrawler teleports into the Pentagon from outside, though he had no way of knowing exactly where Storm and Wolverine were and, unless he's been there a lot, should have been worried about teleporting inside of a wall. 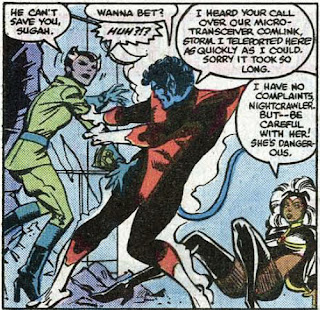 He also mentions wanting to speak with Mystique, a reference to the relationship between the two which Mystique teased in issue #142. 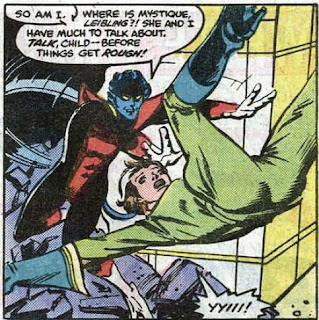 It's stated in this issue that Rogue's stolen powers go away faster the more she uses them. 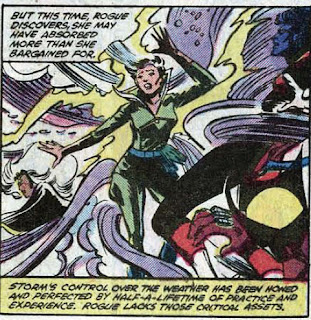 As Carol enters the virus in the government's computer, she also takes the opportunity to erase her own files, declaring that she's starting over. 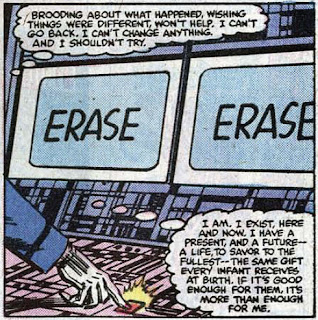 I Love the 80s
Kitty is back in a bikini. 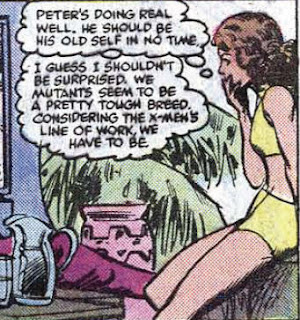 The X-Men apparently arranged for their ancient island base in the Bermuda Triangle to be hooked up to cable... 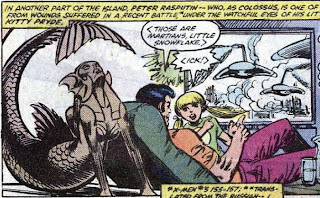 The dense metal of Wolverine's claws is able to to disrupt the psychic energy Professor X is hurling around the room, which seems a dubious ability, at best. 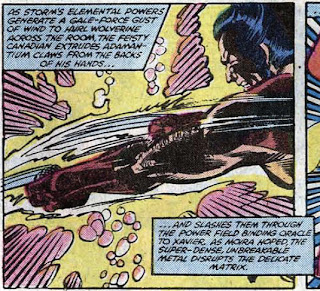 Needless to say, the virus the X-Men deploy is based very much in early 80s understandings of how computers work, but all things considered, it's actually not that outrageous/dated.

Claremontisms
With the X-Men now operating fully out of their Bermuda Island base, we get another instance of Claremont moving the X-Men out of their traditional school setting, though as before, it won't be long before he's forced to return to them to their usual status quo.

Ch'od is described as having a "speed that belies his massive bulk", one of Claremont's favorite descriptions for larger, muscular characters.

Young Love
Kitty finds herself confused and frightened by her growing feelings for Colossus. 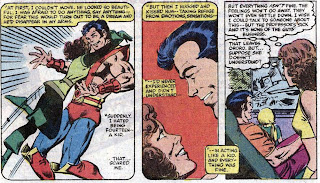 The Best There Is At What He Does
In a neat little bit I've always enjoyed, when Wolverine sets off the metal detector entering the Pentagon, he passes it off as prosthetics caused by war injuries. He's also depicted wearing the uniform of the Canadian Air Force, and it's said that his ranks and medals are legitimate. 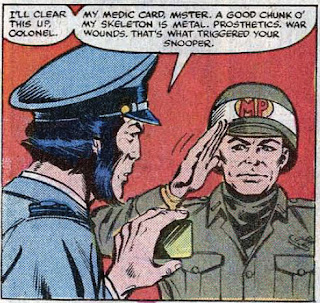 For Sale
As the direct market of independent comic book stores (as opposed to newsstands and drug/grocery/convenience stores which happen to sell comics) grows, Marvel runs an ad listing such stores. 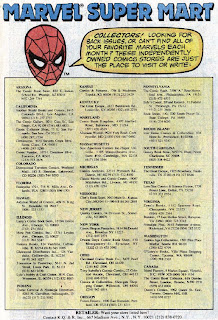 It's in the Mail
Responses to letters in this issue refer to the upcoming New Mutants spin-off (as an X-Men companion book), including Donald Pierce's involvement in that series' first issue. Also, it includes the first mention of Marvel exploring the notion of a live-action X-Men movie.

Teebore's Take
This issue marks the first of four relatively stand alone issues that form the bridge between the two acts of Claremont and Cockrum's Brood story, each one a little different in tone and intent (with all but one laying significant thematic/character groundwork that will be built upon later). Here, Claremont and Cockrum take the opportunity to break away from the space opera and touch on the issue of human/mutant prejudice, something that hasn't really been dealt with since "Days of Future Past" re-contextualized that relationship. Following up on that story, Senator Kelly has openly declared mutants a menace, and the X-Men realize that with the government growing increasingly more anti-mutant, they need to sever whatever lingering ties they may have with it.

This is a clever way for Claremont to address a lingering Silver Age plot thread (and it will have some plot-based implication in the future), but it also furthers that re-contextualization begun in "Days". The X-Men have long existed on the fringes of the Marvel Universe, compared to teams like the Avengers and the Fantastic Four, which have official government sanction and/or the trust of the public. But while lacking an official charter and feared by the public, the X-Men were always firmly in line with the establishment. But with the establishment slowly becoming more anti-mutant, the X-Men are forced more and more into the roles of counter-culture outlaws, even while their actions remain as ostensibly heroic as ever (it is, after all, the government that's becoming less virtuous). This transition of the X-Men away from the morality and functionality of the traditional super-hero team as a result of the government becoming more like the one depicted in "Days of Future Past" will become a significant element in Claremont's stories moving forward.

In the meantime, Claremont takes the opportunity to introduce Rogue to X-Men (and write an epilogue of sorts for his abruptly-cancelled Ms. Marvel series), and though here she's played as a pretty straightforward black hat (and, like in her first appearance, pretty much in direct opposition to some of her later characterizations), her future role in the book, as well as that of her teammates in the Brotherhood of Evil Mutants, will contribute significantly to the X-Men's growing position as anti-establishment heroes.