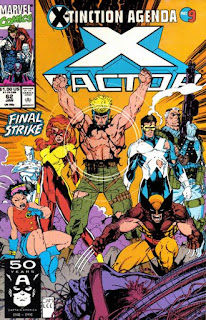 In a Nutshell
Hodge is defeated and the Genoshan government overthrown.

Plot
Rahne and Rictor track down Hodge and radio Storm & Cable for help, but Wolfsbane angrily attacks Hodge on her own, forcing Rictor to come to her aid. Hodge then turns his attention to Cable & Storm, prompting Cable to radio Cyclops for help. He sends Archangel, who arrives in time to save Storm, but his captured himself by Hodge. Just as Hodge is about to kill Archangel, Havok blasts him, and he's shortly joined by Cyclops, Wolverine and Marvel Girl. Elsewhere, Beast commandeers a group of Mutates to help carry his wounded teammates out of the Citadel, and they encounter Jubilee and the rest of the New Mutants, along with Chief Magistrate Anderson, who has arrested the Genoshan President and offers aid to Beast and his teammates. Above, Cyclops and Havok manage to force Hodge into retreat, but Wolverine and Marvel Girl are taken out of the fight. Cyclops orders Wolverine to get everyone to safety, then he and Havok pursue Hodge to the roof of the Citadel. 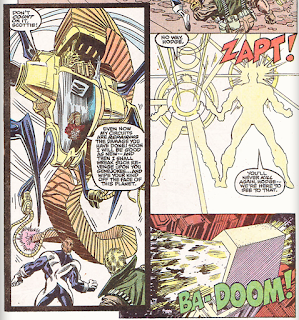 Together, they unleash their full power on the villain, to the awe of teammates and Magistrates alike on the streets below. They destroy Hodge's robot body, but his head remains, and he manages to drag Havok and Cyclops off the roof of the Citadel with him. However, Marvel Girl telekinetically catches the Summers brothers, and when Hodge's head lands at Rahne's feet, she tears it apart, then tosses it into the Citadel, after which Rictor brings the building crashing down. Days later, Chief Magistrate Anderson announces that the military has taken control of the country pending new elections, and both Havok & Rahne decide to stay in Genosha, to watch out for the Mutates. Their teammates then return home, where Boom-Boom & Rictor spread Warlock's ashes over Doug Ramsey's grave.

Firsts and Other Notables
Hodge sort of dies this issue, his robot body destroyed by Cyclops and Havok and his severed head ripped apart by Rahne, but he's ultimately still alive and buried under the rubble of the Citadel. True to his rantings about being unkillable, he'll next turn up as one of the techno-organic Phalanx (an offshot of Warlock's race), just prior to the "Phalanx Covenant" crossover. 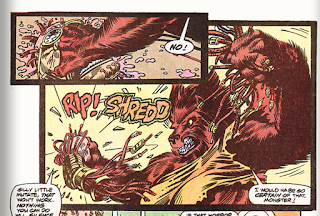 Rictor then proceeds to shake the Citadel to the ground, as he promised to do (repeatedly) throughout the story, just as Havok destroyed it at the end of the first Genoshan story. 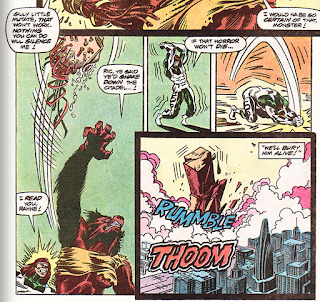 In an effort to keep Genosha going, Chief Magistrate Anderson leads a coup against the President, claiming she's insane, and that her insanity led to the abduction of the X-teams and the death of Warlock, a cover-up Anderson willing acknowledges but claims is necessary to keep the Mutates from being exploited by outside forces, thus effectively ending Genosha's status as a slave state. Though this marks the end of the "openly antagonistic towards the X-Men" iteration of Genosha, this is far from the last we'll see of the place, as it will remain an infrequent but recurring presence in the X-books moving forward as it tries to grapple with the consequences of freeing the Mutates and rebuilding its government and infrastructure.

Havok decides to remain behind in Genosha to ensure that the Mutates don't get exploited by forces within Genosha, and Rahne decides to stay as well, saying she's a Mutate now too and belongs in Genosha, helping her people, bringing to an end her tenure with the New Mutants (and further reducing the roster of that team, following Warlock's death, to Cable, Cannonball, Sunspot, Rictor and Boom-Boom). Both Havok and Wolfsbane will next appear in X-Factor #71, when they're recruited to join the new government-sponsored iteration of X-Factor. 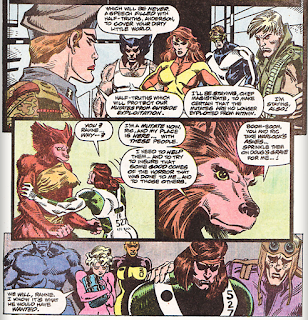 Returning to the New York, the combined X-teams hold a funeral for Warlock and spread his ashes over Doug Ramsey's grave. The closing panel of the issue hints at a possible rebirth, and Simonson, who has said she never killed off a character without having a way to bring that character back, perhaps meant this to be a hint towards her idea for bringing back Warlock. Indeed, when the character does return, it will be in the form of Douglock, rising from Doug's grave.

Jim Lee provides the cover to this issue. Aside from Marvel Girl's boob-thrusting pose, it's pretty solid.

The corner cover box also gets an overhaul, compliments of incoming artist Whilce Portacio (who takes over as the book's regular artist next issue); it will remain the default corner box image until the series is revamped with issue #71.

A Work in Progress
As a result of the Genegineer's changes, Rahne is no longer the quiet, obedient girl she was, now more prone to fits of rage. 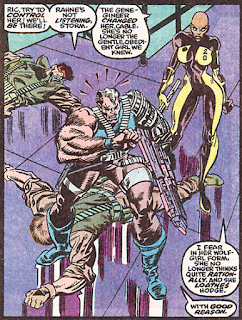 She's also gained the ability to transform into a massive wolf, something that never really comes up again. 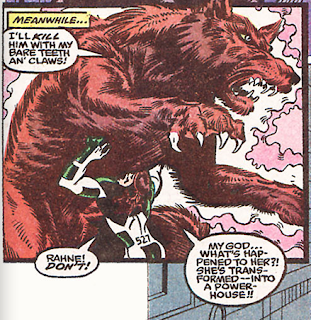 Wolverine is back to being mostly naked, after appearing in a tattered version of his costume in X-Men #272.

Jean rightly tells off Wolverine and Cyclops as the pair bicker over her.

Hodge taunts Cyclops and Havok that he can't be killed and will haunt the X-Men even in death, which more or less proves to be true. 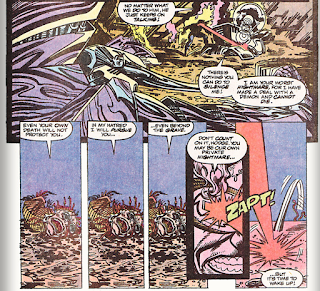 Artistic Achievements
In this issue's installment of "weird Bogdanove artistic tics that bug me", I can't stand the way he draw half-wolf, half-human Rahne less like a werewolf and more like a big dog.

The Best There is at What He Does
Wolverine takes a beating from Hodge which takes him out of the final fight, as he declares his healing factor isn't what it used to be. 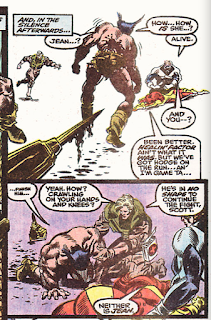 Teebore's Take
And with that, "X-Tinction Agenda" comes to a close. Though the climax isn't terribly complex (the final two issues are basically one long fight with Hodge, which ends after Havok and Cyclops blast him to pieces) and the full ramifications of the complete collapse of Genosha are held for future issues, this nevertheless stands as one of the more tightly-plotted and focused of all the X-crossovers, and it's format (a central narrative that unfolds in numbered chapters across the line with little meandering) will serve as the new template for the next few years. In fact, it's the plotting of this story that makes it successful - not that anything that happens is terribly groundbreaking or surprising, but the steady progression of the plot from chapter to chapter, the ability of Claremont & Simonson to make each chapter of the story advance the overall plot but also focus on the respective characters of each title, and the classical structure of the narrative (act one: introduce the threat and establish the stakes, act two: counterattack leading to the heroes' seeming defeat, act three: the heroes recover and find a way to prevail) all combine to help propel the reader through the story and past both some dodgy story beats (the collapse of Genoshan society seems to happen awfully fast in this issue) and some particularly dodgy art in many places.

Because yes, the art in every chapter of this story outside of Uncanny X-Men (so two-thirds of the story, then) is routinely awful. Liefeld, who was either behind deadline or already checked out and prepping for X-Force, is mostly absent, robbing the New Mutants chapters of his distinct energy and the entertainment value that only comes from Liefeld artwork, while the X-Factor chapters stumble under the pencils of Bogdanove, an artist whose style is not without its charms but is a poor fit for this material, and whose work was dragged further into the gutter by the continued presence of Milgrom's inks. Had Jim Lee drawn this entire story, or if Liefeld had showed up for it and Whilce Portacio come on X-Factor a few months earlier than he did to give the whole story a "preview of Image Comics" look, or even if the X-Office had been able to line up some more suitable fill-ins, "X-Tinction Agenda" might be remembered today as one of the all time great X-Men crossovers.

As it is, it still stands as one of the better ones, in part because of how tightly-structured it is, and in part because of how it serves as the end of the disconnected, narratively-meandering status of the X-books - kept apart for far too long, with Uncanny in particular a narrative mess as a result of the episodic "non-team era", "X-Tinction Agenda" marks the return of a more cohesive X-universe, in which the series are more likely to interact with one another, which lead directly into the linewide revamp of 1991. But "X-Tinction Agenda" also stands out because, like the original X-Men crossover, "Mutant Massacre", it's built on one of the chief thematic elements of the X-Men narrative.

Genosha has since its inception been a metaphor about the evils of institutionalized intolerance, while Hodge is the personification of prejudice and bigotry towards anyone labeled an "other", unflinching in his views, unable to be defeated by simple violence: his body is destroyed, the Genoshan citadel reduced to rubble, but somewhere inside, that mangled up head of Hodge survives, a symbol of the rotten ideas still lurking in the core of Genosha, unable to be destroyed by physical violence just as bigotry can't be punched to death. "X-Tinction Agenda" holds up, not just because it's well-constructed and features some great Jim Lee art, not just because it signals something of a return to a more traditional narrative status quo for the X-books, but because it puts center stage the core themes that lie at the heart of the X-Men.

Next Issue
Next week: Wolverine - Bloodlust, Excalibur #33 and Wolverine #35.