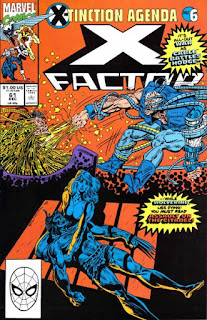 In a Nutshell
Havok regains his memories as the rest of the combined X-teams are captured.

Plot
Hodge gloats over the captured mutants, then orders the Magistrates to take them to their cells. As they pass a group of Mutates, they recognize the transformed Rahne, and Cable flies into a rage. He attacks Hodge despite being unable to use his bionic arm, but Hodge easily overpowers him. Meanwhile, the rest of the X-Men, X-Factor and New Mutants prepare their assault on the Citadel from an abandoned warehouse, using gear provided by SHIELD and the US government. Back at the Citadel, Jean is placed in a cell along with a powerless, severely wounded Wolverine, and the pair kiss, just as Hodge, hoping to drive a wedge between Cyclops and Jean, had planned. Meanwhile, the Magistrates move on the abandoned warehouse, its location gleaned from the minds of their captives, but they discover the building empty moments before it explodes. 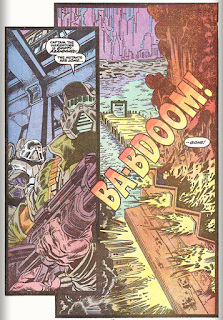 Just then, Banshee, Cannonball and Archangel attack the Citadel, hoping to capture the Genoshan president for ransom, but Hodge overpowers and captures them as well. Back at the remains of the warehouse, Cyclops and Iceman, disguised as Mutates, use the explosion to sneak into the Citadel under the cover of bringing an injured Beast to the infirmary. Once inside, the three attempt to free their teammates but find their way blocked by Havok. Cyclops once more tries to knock some sense into his brother, and this time, it seems to work, just as Hodge appears. Havok knocks out Cyclops then presents him to Hodge, feigning loyalty but, with his true identity returned, secretly vowing to destroy Hodge

Firsts and Other Notables
This issue ends with Havok, having been wracked with doubts about his true identity following his confrontation with Cyclops last issue, regaining his full memories and true identity, and swearing to make Genosha pay for what they've done. 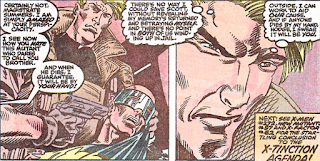 Placed in a cell together by Hodge, Jean and a greatly-injured Wolverine share a kiss. Though its suggested that Jean is responding to Wolverine out of pity for someone she believes to be dying, this is one of the first acknowledgements of Claremont's "Jean secretly pines for Wolverine" retcon by a writer other than Claremont, as Hodge explains that he read in Xavier's files about Wolverine and Jean's secret feelings for each other. 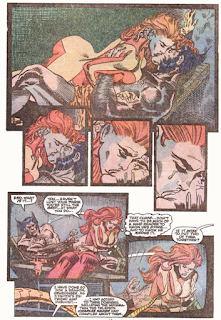 A Work in Progress
Between New Mutants #96 and this issue, after being captured, Forge has fallen unconscious. Later in the issue, we learn this is to make his mind unreadable by the Genoshan telepaths, so as to protect a secret weapon known only to him and Cyclops. 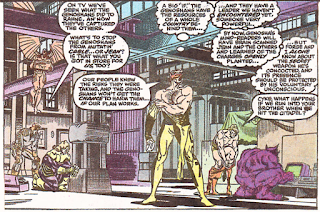 This issue emphasizes the fact that in Genosha, there's a second class of "free mutants", like Wipeout and the Press Gang, who serve Genosha but aren't genetically-modified slaves like the Mutates.

It's also established that Hodge's robotic body is designed to withstand the powers of the various X-teams, and that Right technology has been used to guard some Genoshan weaponry from Cyclops' blast.

Cyclops once again get his costume (this time a Mutate disguise) destroyed in this issue.

Artistic AchievementsI have no idea why Boom-Boom and Jubilee are making kissy faces at each other even while rolling up their sleeves as if to fight in their portion of the opening recap splash page. 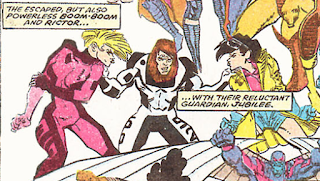 Last issue, Bogdanove's exaggerated gloppy tears drew my ire; this issue, it's the way he draws everyone with incredibly huge, pronounced lips. 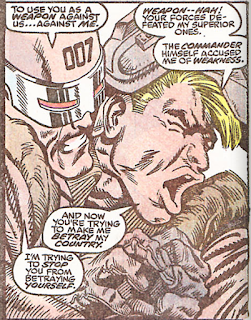 The Cable Guy
With his powers wiped by Wipeout, Cable's bionic arm is useless, which doesn't make much sense given that thus far, we've never been led to believe his arm is anything other than bionic, though it does somewhat retroactively fit with what we later learn about the relationship between Cable's arm and his power. 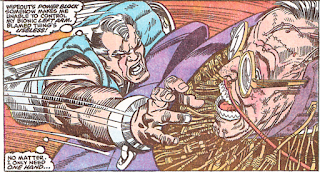 The Best There Is At What He Does
As in the first Genosha story, this issue features a powerless Wolverine heavily injured without his healing factor to help things along. 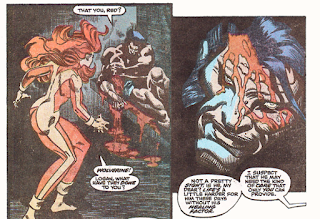 Teebore's Take
The second act of "X-Tinction Agenda" closes as most second acts of three act adventure stories do, with things looking their darkest for the heroes: Warlock is dead, Storm & Rahne are Mutate slaves, and almost everyone else is captured save for the de-powered Boom-Boom & Rictor, and Jubilee. Simonson does an effective job of selling the despair of the situation, as every effort the combined X-teams make against Hodge comes undone (in part because thus far, no one knows Hodge is involved until they're at his mercy), but also planting the seeds (along with the tease Claremont inserted into chapter 4) for a potential turnaround, both in Forge & Cyclops' secret weapon, and in the issue-ending awakening of Havok's memories .

Bogdanove's art continues to be a hindrance to the story, with every character rendered in profile looking like a tiny blackhole six inches from their face is elongating their hair, nose and lips as much as possible, but the steady rhythms of the plot and structure of the story help push through it. Act One was the introduction of the threat and its opening salvo, Act Two the counterattack and ultimate defeat. That Act Three will involve a reversal of fortunes and the ultimate triumph of the heroes isn't meant to be a surprise; its impact comes from knowing it will happen, and seeing just how it comes about after this chapter leaves things looking so bleak.