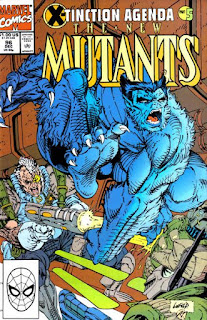 In a Nutshell
Rahne becomes a Mutate while a contingent of the X-teams get captured.

Plot
Jubilee, Boom-Boom & Rictor are attacked by a pair of Magistrates using a Mutate tracker, but they overpower the soldiers, prompting the Mutate to join them. Meanwhile, at an abandoned warehouse, Cable and the rest of X-Factor and the X-Men prepare their assault on the Citadel, with the members whose powers are "quiet" planting explosive charges and locating the prisoners while the rest act as shock troops. At the Citadel, Hodge orders the Genegineer to begin the Mutate transformation process on Rahne. Later that night, Boom-Boom, Rictor & Jubilee break into an empty apartment looking for food. But when they overhear a news broadcast of Rahne claiming she's willing to serve Genosha as punishment for her crimes,  Rictor insists on returning to the Citadel to rescue her. 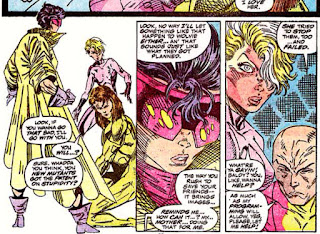 Jubilee agrees, not wanting the same thing to happen to Wolverine, while the Mutate they rescued agrees to help as much as his programming will allow. Meanwhile, the stealth force arrives at the Citadel, but are soon discovered, prompting a battle with Magistrates just as Boom-Boom, Rictor &  Jubilee arrive. They watch from afar as Hodge and Wipeout intervene, capturing most of their teammates. Hodge overhears them, but their Mutate ally covers for them. Just then, Hodge calls forth Mutate #490 to taunt his captives, and Rahne emerges from the shadows, declaring they'll be tried and turned into Mutates as well, to serve Genosha as she now does. Rictor vows to find Wipeout and get his powers back, after which the Genoshans will return Rahne and his friends to him, or else he'll shake the island so hard no a single building will remain.

Firsts and Other Notables
On the heels of Storm's transformation into a Mutate in X-Men #271, this issue finds Rahne undergoing the same process as well. Unlike Storm, Rahne's transformation will have a far more lasting effect her - while she won't remain a Mutate much longer than storm, the ramifications of this event will remain a part of her character throughout the end of New Mutants, through her tenure in X-Factor and into her time in Excalibur, and thus, for most of the next decades' worth of issues, making this the final appearance of the traditional Rahne as presented in the series thus far for a long time.

A Work in Progress
By the end of the issue, Marvel Girl, Cable, Sunspot, Gambit and Forge are captured by Hodge after Wipeout removes their powers. Cannonball is, laughably, shown in the background of one of the panels as being a member of the stealth team as well, which is probably a case of Liefeld just drawing what he wanted, and I don't believe Cannonball is shown amongst the captives in the next chapter.

Boom-Boom, somewhat rightly, complains that her power and Jubilee's are essentially the same.

Later, Boom-Boom (who's snarkily delightful in this issue, honestly) tells Jubilee to shut up already about how awesome Wolverine and how Jubilee is totally his best friend. 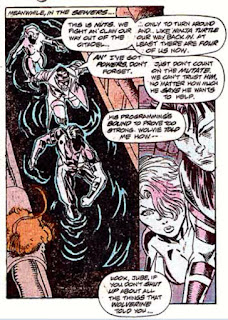 Both she and Rictor stress throughout this issue how despite being powerless, they're not helpless, thanks to Cable's training.

In prepping Rahne for the mutate process, Hodge insists that the Genegineer program her such that some part of her mind recalls her previous life and is aware of her status as a mindless slave. 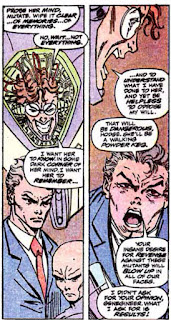 501 Genes
Boom-Boom is able to leap from a standing position high enough into the air to kick up at a Magistrate on her way down.

Also, Boom-Boom presumably has no depth perception in this issue, as she spends most of it with half her face covered by her hair (a favorite trick of Liefeld's).

Young Love
Rictor professes his love for Rahne in this issue.

Teebore's Take
After teaming up with an unnamed artistic crew last issue and with a fill-in on tap for next issue, this is the only chapter of "X-Tinction Agenda" that Rob Liefeld draws on his own. Even then, he still needs two inkers on this issue, and the transition between them is not exactly subtle (if I had to guess, I'd say that the crisper art more akin to Liefeld's usual fare was done by Thibert, with Rubinstein handling the pages with the thicker lines, but I'm also terrible at recognizing this stuff). To Liefeld's credit, the art here is a step up from the previous issue, in that it suffers from fewer incomprehensible panel transitions and the captions/dialogue don't have to work quite as hard to cover for the art by explaining what readers are supposed to be seeing. It's still Liefeld art though, so it isn't exactly good, but it at least carries the same charms, so to speak, as the rest of his work on the series.