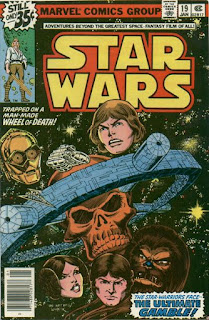 In a Nutshell
Senator Greyshade learns of the Imperial's plans while Han tries to win enough to get his friends off the Wheel.

Plot
As Stormtroopers corner Luke and the droids, Artoo manages to tap into the computer and lower a containment wall between them. Meanwhile, Leia and Han are similarly cornered by Stormtroopers, but are saved by the arrival of Wheel security forces sent by Greyshade, who take Leia to Greyshade and Han back to the Falcon to help them search it. Elsewhere, Chewbacca manages to reach the upper levels of the Wheel, but when he's confronted by security he attacks, and is ultimately kniocked out and taken to the gladiator pits. Meanwhile, Han is forced to help search the Falcon for the profits Greyshade believes he stole from the destroyed merchant ship, while Leia tries to explain to Greyshade that Strom is setting up the Rebels in order to enact a takeover of the Wheel. Just then Strom enters his office, enraged that Greyshade interfered in the apprehension of the Rebels and is harboring Leia.

The two talk privately, and Greyshade agrees to keep quiet about Strom's plan in exchange for Leia. Later, at the Wheel's hosptial, a still-unconscious Luke receives treatment, but Threepio and Artoo are claimed by security, told they are now Wheel property, sold by Han in exchange for a gambling stake. At the pits, Chewbacca is told he can either fight willingly, with a chance for a fortune if he wins, or be shipped off aboard an Imperial prison ship. Meanwhile, Han, hoping to win enough money to bail out his compansions, encounters a run of bad luck. He nearly depletes the credit line he got for hocking the droids, and thus is forced to gamble with the one thing he has left: his life. But as Han enters the gladiator matches, he's watched by Greyshade, who vows to ensure he loses this game, just like he made him lose all the others.

Firsts and Other Notables
This issue reveals that Commander Strom's overall plan in attacking the Tagge ship and framing Rebels for it last issue was to create a situation in which the Wheel would willingly allow for greater Imperial control of the facility (under the guise of protecting it from the Rebels who are attacking its profits). 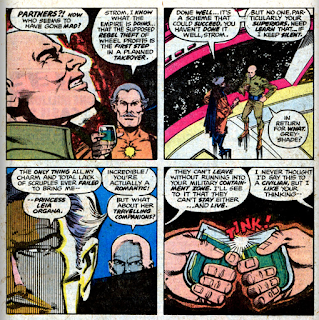 A Work in Progress
Both the cover and an interior establishing shot suggest the Wheel is much, much bigger than I was picturing it, with the main ring dwarfing some pretty decent-sized capital ships. 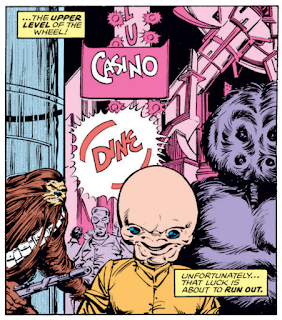 Chewbaccs is threatened with being sent to the Spice Mines of Kessel (though a typo calls them the SPINE mines of Kessel), a fear espoused by Threepio the film. 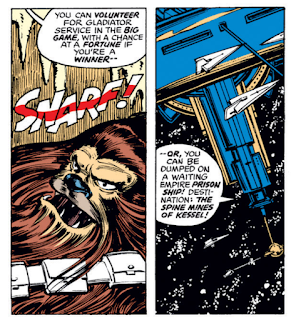 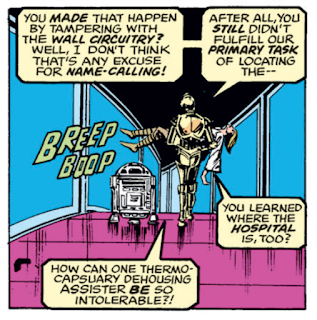 It's suggested in this issue that Wookiees are relatively rare in the galaxy, though later stories in the Expanded Universe (as well as the Prequels) suggest the species is, if not ubiquitous, at least fairly well-known and prominent in the galaxy. 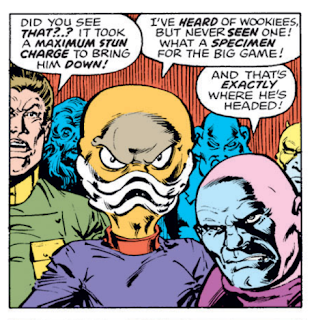 Teebore's Take
The "Wheel Saga" hums along nicely, introducing Chewbacca into the mix and putting him on a collision course with Han as both get drawn into the Wheel's gladiatorial combat games (pitting two heroes against each other in gladiatorial combat being a staple of the superhero comic book genre). But where the issue really shines is in the political intrigue, as Commander Strom's plan to frame the Rebels as a means to increase Imperial control over the Wheel is revealed and Greyshade shows his true colors in allowing Strom to continue with it, in exchange for Leia. It's a development that makes the universe feel more lived-in, one of the things that made Star Wars great in the first place, by showing a side of the Empire beyond the might of a Death Star, that it can work its will insidiously, in ways more subtle than blowing up a planet. All in all, these developments combine with the more traditional comic book trappings of the issue to help make this story, at least in these early goings, the perfect kind of licensed comic story: one which is feels very much like it belongs in the same universe as the original story, yet one which still takes advantage of its particular medium in telling it.

Next Issue
Han fights in the pits and Luke wakes up.