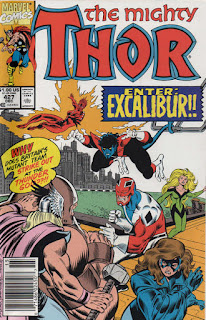 In a Nutshell
Thor and Excalibur battle Juggernaut


Plot
#427: Thor arrives back on Earth after a lengthy time away, and begins reconnecting with the life of his alter ego, Eric Masterson. Meanwhile, Excalibur is tasked with recapturing Juggernaut, who was last seen battling Thor in New York. Just then the Wrecking Crew arrive in the city and begin a crime spree. Loki, worried about leaving the Wrecker's Asgardian power unchecked, tasks Enchantress and Ulik with capturing him. Using a psychic beacon, they lure the Wrecking Crew to the docks, just as Excalibur arrives, drawn to the beacon by Phoenix. The two groups fight, and when Thor arrives on the scene as well, the Wrecker casts a spell on him, making Excalibur view Thor as the Juggernaut, leading to Shadowcat trapping "Juggernaut" in the concrete dock. #428: A four way melee breaks out between Thor, Excalibur, the Wrecking Crew, and Code: Blue, the special police task force that deals with super-powered situations. When Lockheed discovers the invisible Ulik and Enchantress, driving them off, the Wrecking Crew soon follows suit, after which the illusion of Thor as Juggernaut ends. 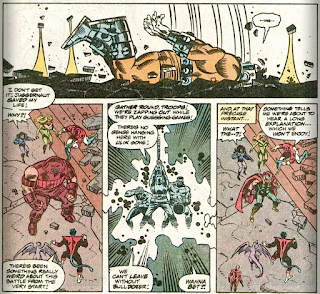 Making amends, Excalbur tells Thor why they're in the city, and ask for confirmation that Juggernaut is indeed still on the deserted asteroid field where Thor left him after their last encounter. Thor agrees and uses his hammer to transport himself, Captain Britain, Meggan and Shadowcat to the asteroid field. Once there, the heroes are quickly captured and taken to another planet, where they are brought before the planet's leader: Juggernaut. #429: En route to holding cells, the captive heroes are rescued by rebels led by Prince Zalaski, the former leader of the alien world, who promises them their freedom if they defeat Juggernaut so he can regain power. Thor agrees, and the two behemoths battle until Thor is able to use his hammer to send Juggernaut careening off into space. As Juggernaut vows to find his way back to Earth, Thor and Excalibur return there, and bid farewell to one another.

Firsts and Other Notables
This story takes place during the DeFalco/Frenz run of Thor, in which Thor is sharing his time with architect Eric Masterson, transforming back and forth between Thor and Eric by tapping his cane/hammer on the ground (and reverting to Eric if he's separated from his hammer for more than 60 seconds), a nod to the character's original Don Blake secret identity from the Silver Age. As this story begins, Thor is returning to Earth after an extended absence in space, the "Black Galaxy Saga" story.

Excalibur's involvement in this story is triggered by Crossmoor Prison asking them to help retrieve Juggernaut, who was freed from the prison by Loki in Thor #411, during "Acts of Vengeance". The cover to issue #427 is an homage to X-Men #1, with the members of Excalibur taking the place of the original X-Men and Thor/Juggernaut standing in for Magneto.

A Work in Progress
Nightcrawler mentions his post-teleportation weakness. 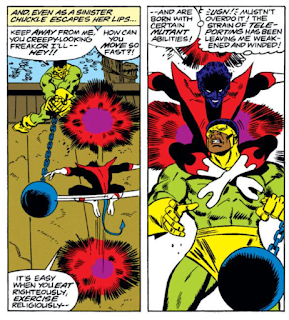 Issue #427 ends with Shadowcat phasing Thor into the ground then leaving him there, fused with the molecules of the ground, something she says she's never done before. But I'm fairly certain she has, and when it happens it usually causes an explosion when the phased-individual's molecules solidify, thus forcing out the existing material. 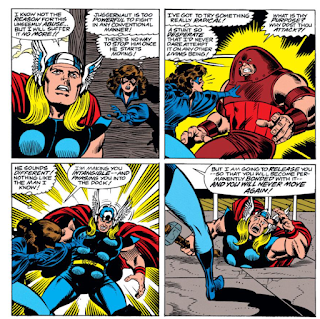 Thor is able to use his hammer to create a mystic cone, inside of which Juggernaut is denied his magic-based abilities; I admittedly don't have an encyclopedic knowledge of Thor's history, but that seems like a convenient and one-off use of his hammer. 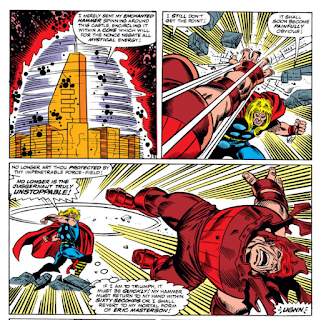 The Grim 'n' Gritty 90s
A testament to his increasing ubiquity around this time, Ghost Rider somewhat randomly appears in issue #430, in an Earth-based subplot. 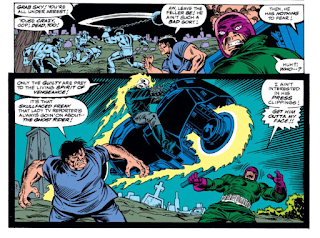 Teebore's Take
Though Walt Simonson's run on Thor gets most of the acclaim and recognition (rightly and understandably), the DeFalco/Frenz run that followed it is highly underrated. Both creators bring a retro charm to the series, both in terms of the storytelling (returning Thor to the classic alter ego swap of the Silver Age, and fleshing out the book's supporting cast) and the art (which lacks the panache of Jack Kirby's Silver Age work but is still classically bright and surprisingly solid), and they manage to pull off the difficult feat of making each issue (or, at least, each story) stand on its own while also feeling like a part of a larger narrative, developing subplots over time then eventually bringing those subplots into the foreground. Their run isn't flashy or groundbreaking (which is probably why it gets overlooked), but it is solidly entertaining and consistent throughout, with a lot of throwback, retro charm.

In terms of Excalibur, their involvement in this issue smartly follows up on Juggernaut's escape from a British prison during "Acts of Vengeance", and they're positioned within this story as the British equivalent of the Avengers or X-Factor. Which, frankly, is the kind of thing that would be nice to see in their own series, as it gives them something of a focus and a narrative hook for stories. Not surprisingly, given that they're the guest stars here, it's ultimately Thor who gets the big confrontation and victory over Juggernaut, but it's nonetheless refreshing, even in a diminished role, to simply see Excalibur acting as straightforward superheroes, instead of being endlessly embroiled in self-referential alternate universe stories and navel-gazing or ultimately pointless fill-ins.

Next Issue
Claremont returns in Excalibur #32, followed by the beginning of the second Hama/Silvestri story in Wolverine #34. Next week, the final act of "X-Tinction Agenda" begins in Uncanny X-Men #272.
Newer Post Older Post Home
Posted by Austin Gorton at 12:00 PM