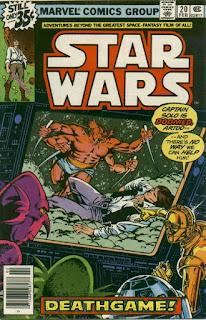 In a Nutshell
Han faces his first opponent in the Wheel's arena.

Plot
The patrons of the Wheel watch in outrage as an X-wing fighter attacks a pleasure ship departing the station, after which the fighter is quickly destroyed by nearby Imperial forces. Senator Greyshade then departs for a meeting with Commander Strom, leaving behind the captive Leia, who is outraged that Greyshade is going along with the Imperial scheme to frame the Rebels and gain control of the station. Greyshade assures Strom that aside from Leia, the rest of the Rebels aboard the Wheel will soon die, and they watch Han's scheduled arena fight begin. Intentionally slated into the wrong class, Han is forced to fight a massive being with four arms, who quickly overpowers him. 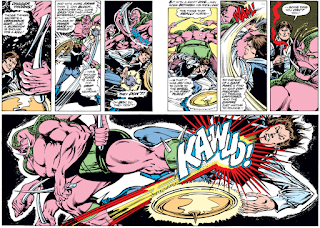 Meanwhile, Artoo & Threepio are saved from having their memories wiped by Master-Com, the droid personification of the station's master computer, who is fascinated by their devotion to Luke. He takes them to the hospital, where they discover that Luke is missing, just as Leia manages to escape from her quarters in the station's executive tower. Master-Com suggests the droids try searching for Luke in the casino areas, where they will more easily blend in amongst the other droids. They arrive on the upper level just in time to see Han at the mercy of his foe, but as his attacker charges, Han manages to trip him, and the creature falls on his own weapon, killing himself. Strom is outraged that Han survived, but Greyshade assures him this was only a preliminary match, and that Han must still endure the main event.

Firsts and Other Notables
The letter column in this issue features a letter from former series writer Roy Thomas praising the work of Goodwin & Infantino, and specifically complimenting Goodwin on his use of Jaxxon in issue #16. 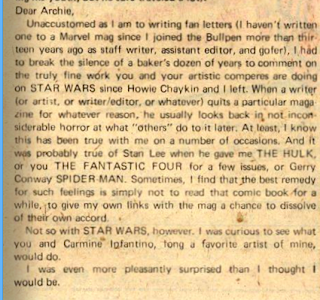 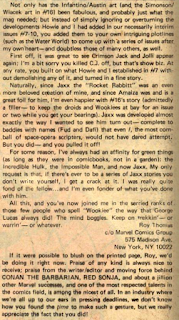 Um, Actually
The X-Wing which attacks the Wheel's merchant ship on the opening splash page is off model. 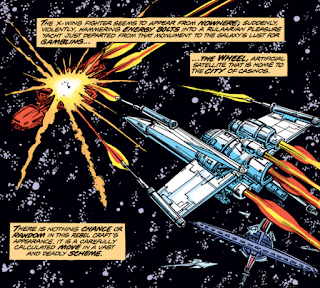 Young Love
Strom gets in a nice dig on Greyshade when they're discussing Greyshade's efforts to win over Leia. 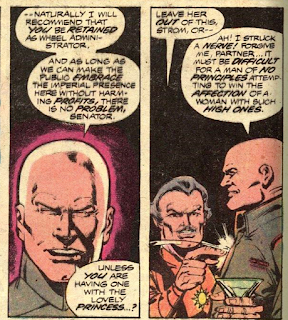 For Sale
There's a one page ad for Marvel's Micronauts series in this issue, a series which shares some elements with Star Wars. 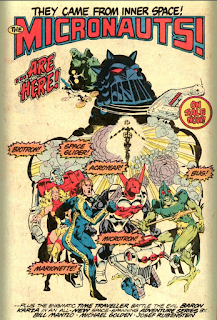 Teebore's Take
Though a lot seems to happen in this issue, it's ultimately more of a treading water chapter. Leia escapes from Greyshade, but it's suggested she'll be easily recaptured (and it's not like she currently has a way off the Wheel anyways). Luke wakes up (or at least disappears from the hospital) but his current condition and the answer to what caused his coma-like state is held for the next issue. And even Han's battle with a massive alien in the Wheel arena, the action centerpiece of the issue, is a holding action, a preliminary match before the real event (presumably battling Chewbacca). This story has thus far hummed along steadily enough (and with all the characters at least in the same place, no one can move too far afield of one another) that having a treading water chapter doesn't completely kill its momentum, and it does an effective enough job of masking that stall with the illusion of plot development.

Next Issue
The return of Darth Vader!