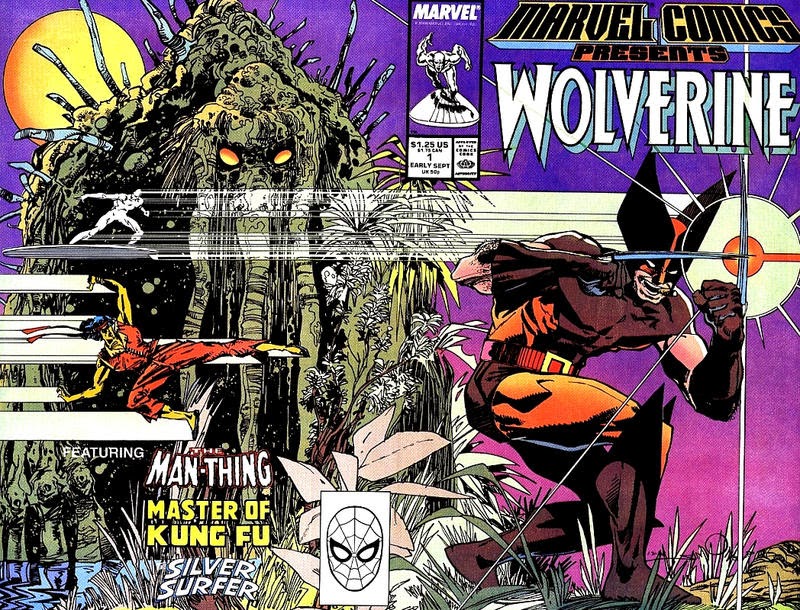 In a Nutshell
Wolverine becomes embroiled in a power struggle for Madripoor's criminal empire.

Plot
Issue #1: In Madripoor, Wolverine visits the Princess Bar, looking for information. After fighting off a group of thugs threatening the owner, O'Donnell, he tells O'Donnell he was sent by Dave Chapel to find someone named the Tiger. Issue #2: The thugs chased off by Wolverine report to their boss, Roche, who tells them if they can defeat his newest enforcer, Razor Fist, they can live. Razor Fist easily kills them all, and is given the task of defeating the stranger interfering with Roche's business. Meanwhile, Wolverine tells O'Donnell that Chapel was tortured and left for dead when Wolverine found him. Suddenly, he sees a woman outside and recognizes her as Jessan Hoan. Issue #3: Wolverine confronts Jessan, but she escapes. Just then, Wolverine is confronted by Sapphire Styx, an energy vampire employed by Roche, who weakens him just as Razor Fist attacks, knocking him out.

Issue #4: Wolverine, a captive of Roche, is tortured for information, just as Chapel was before. Eventually, Wolverine manages to escape but is confronted by Razor Fist, who offers him a warriors death. The two battle, but the weakened Wolverine is overpowered and tumbles into the river. At the Princess Bar, Jessan comes looking for Wolverine, but O'Donnell tells her Roche has him. Issue #5: The river carries Wolverine out to the harbor, where he hallucinates before Jessan, having been watching Roche's villa, rescues him. Recognizing him as one of the X-Men who saved her from the Reavers, she nurses him back to health, and once he's recovered, thanks him for saving her life. Issue #6: Jessan tells Wolverine of how she tracked the Reavers' attack on her bank back to Roche. More angry and violent now as a result of the Reaver's attempted brainwashing, she set about usurping Roche's operation as the Tiger. As they pass one of her ships in the harbor, Wolverine catches a familiar scent. Going aboard the ship, they discover the crew slain just as the ship explodes.

Issue #7: Surviving the attack, Wolverine and Jessan track down a group of Roche's thugs and learn he has captured O'Donnell, believing him to be the Tiger. At Roche's villa, Roche prepares to have O'Donnell tortured. Issue #8: Wolverine and Jessan infiltrate Roche's complex, with Wolverine coming face to face with Razor Fist while Jessan confronts Sapphire Styx. Issue #9: Wolverine and Jessan battle their respective foes, with Jessan wounding Sapphire Styx and Wolverine slaying Razor Fist. Issue #10: Jessan frees O'Donnell as Wolverine confronts Roche. After Wolverine is shot by Roche, Jessan decapitates him, believing him to have killed Wolverine. She then takes Roche's place as the head of Madripoor's criminal empire. As she prepares to meet Madripoor's prince, Wolverine appears, telling her he'll act as her guardian and conscience. She tells him that he's won her heart; perhaps, he can yet save her soul.

Firsts and Other Notables
Marvel Comics Presents was a bi-weekly anthology series Marvel began publishing in 1988, which ran for 175 issues, until 1995. Each issues contained four eight page stories, at least two of which were usually parts of variably longer stories, while at least one was usually a standalone story. The idea was that readers would get not only a variety of characters in each issue but different kinds of stories: some starting, some ending, some in the middle, some standalone.

The series began with serial adventures for Wolverine, Shang-Chi, and Man-Thing, along with a standalone Silver Surfer story. Originally, the "lead" feature would focus on a specific member of the X-Men (Wolverine gives way to Colossus, followed by Cyclops, and so forth), though by issue #39, Wolverine became a regular feature and the series essentially became a second Wolverine solo title (while also continuing as an anthology).

For the record, while we'll probably look at most of the early X-Men specific stories (I already have the Colossus serial and the Cyclops one on my schedule), I don't intend to cover every Wolverine MCP story, just the significant ones (like "Weapon X").

Issue #6, which was on sale at the same time as Wolverine #1, features Wolverine wearing an eye patch as a pseudo disguise. By issue #8, he is using the name Patch as a cover identity, and wearing the Patch costume that is his default look in the early issues of his series (the idea is, since the world believes the X-Men to be dead, Wolverine needs a new identity in order to operate independently in public and still maintain that ruse. A new costume and an eye patch is a pretty ludicrous secret identity, but the effort is appreciated). 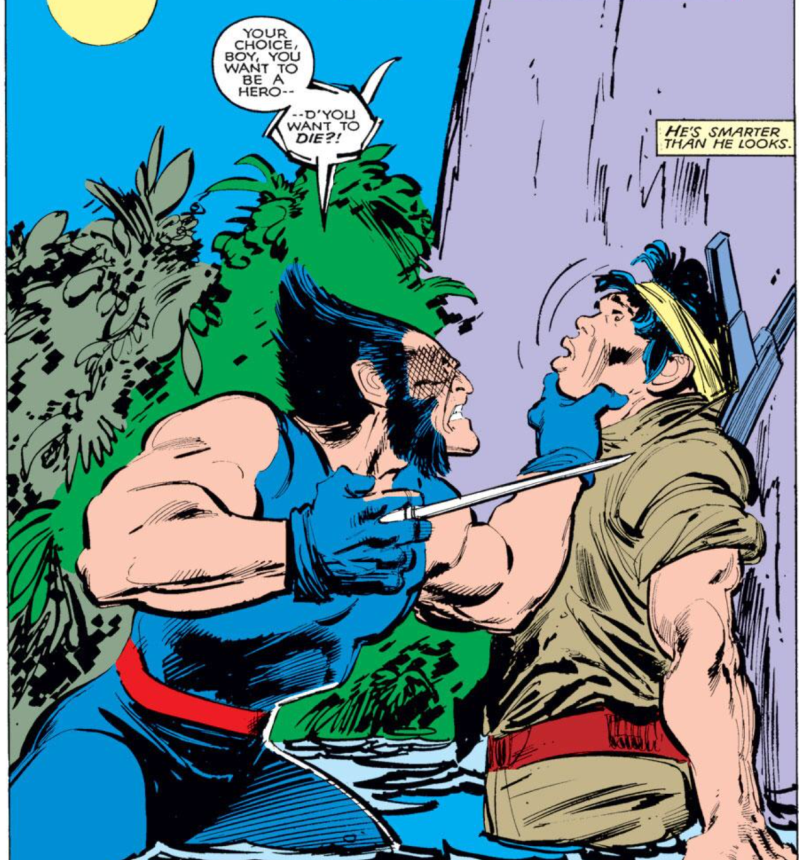 This storyline sees the return of Jessan Hoan, captured by the Reavers then set free by the X-Men in Uncanny X-Men #229. As a result of Pretty Boy's attempted brainwashing in that issue, she is stuck somewhere between the innocent woman she was and the more evil being into which the Reavers were trying to transform her. By the end of this issue, she has crowned herself the new crimelord of Madripoor and taken the name Tyger Tiger.

The Princess Bar, which will become a significant location within Madripoor throughout Wolverine's solo series, makes its first appearance in issue #1.

Roche, the crime lord whom Tyger Tiger deposes and his associate, Sapphire Styx, make their first, and I believe only, appearances in this storyline. One of Roche's henchmen, Razor Fist, is an old Shang-Chi villain. As the name suggests, he has razor sharp blades for hands. He seemingly dies at Wolverine's hands in this issue, but will return elsewhere with no explanation.

Art in this story comes from Marvel mainstay John Buscema and inker Klaus Janson, who will also inaugurate the Wolverine solo series.

The Chronology Corner
Wolverine's appearance in this story occurs after Uncanny X-Men #231; after this story, he appears in the first seven issues of his solo series before rejoining the X-Men in issue #232.

A Work in Progress
Though it's not its first appearance, we learn a bit more about Madripoor throughout this story. 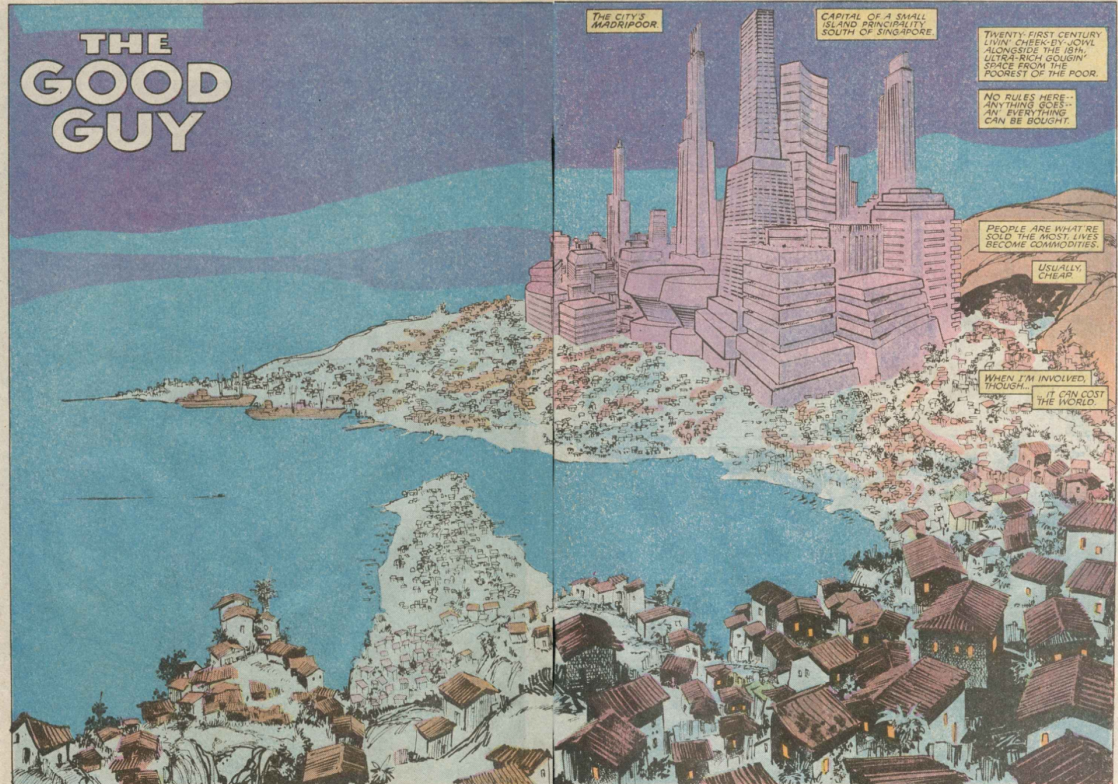 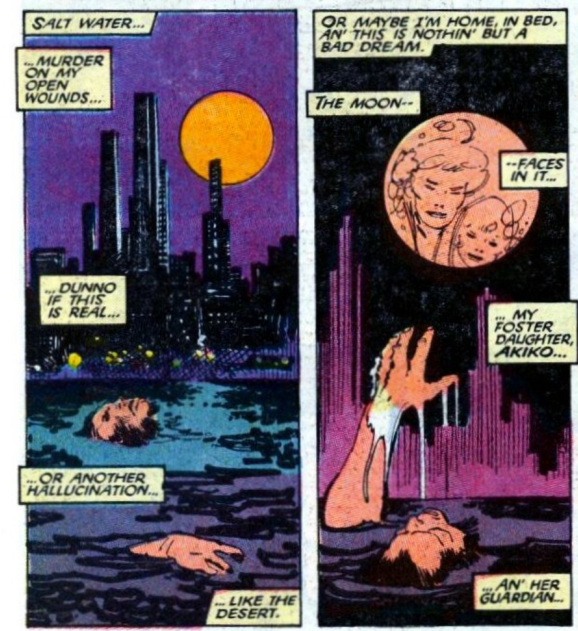 It's revealed in issue #6 that the Reavers were hired to rob Jessan's family's bank by Roche, prompting her revenge plan against him and her ultimate usurpation of his role. 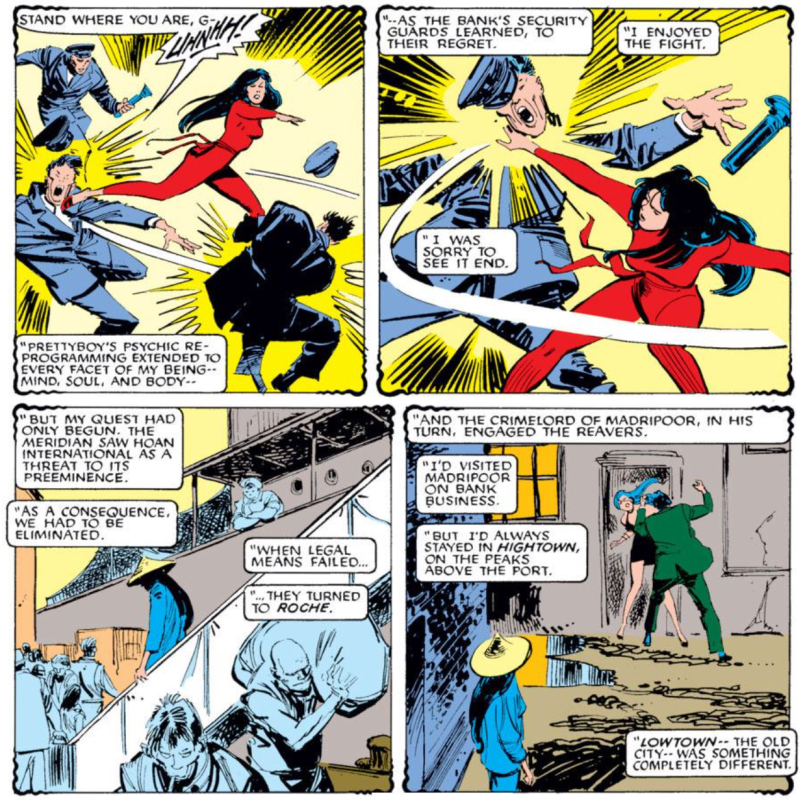 I Love the 80s
Given that this series debuted in 1988 with a Wolverine solo story, it's not surprising that he's featured on the front cover of each of these issues, including, on issue #1, with a cigar fairly prominent.

Also, as easy as it is to rag on the popularity and ubiquity of Wolverine, even in 1988, it's worth pointing out that while Marvel Comics Presents essentially gives him a second solo title, it is an anthology series, and while Wolverine will remain a presence in this series, without him, it's unlikely that the Shang-Chi and Man-Thing stories which also launch this series would ever have seen the light. Basically, Wolverine is keeping the lights on for the less-popular characters who will appear in this series.

The Best There is at What He Does
In issue #1, Wolverine gets a legitimately cool tough guy moment when facing off against a random thug holding a woman hostage. 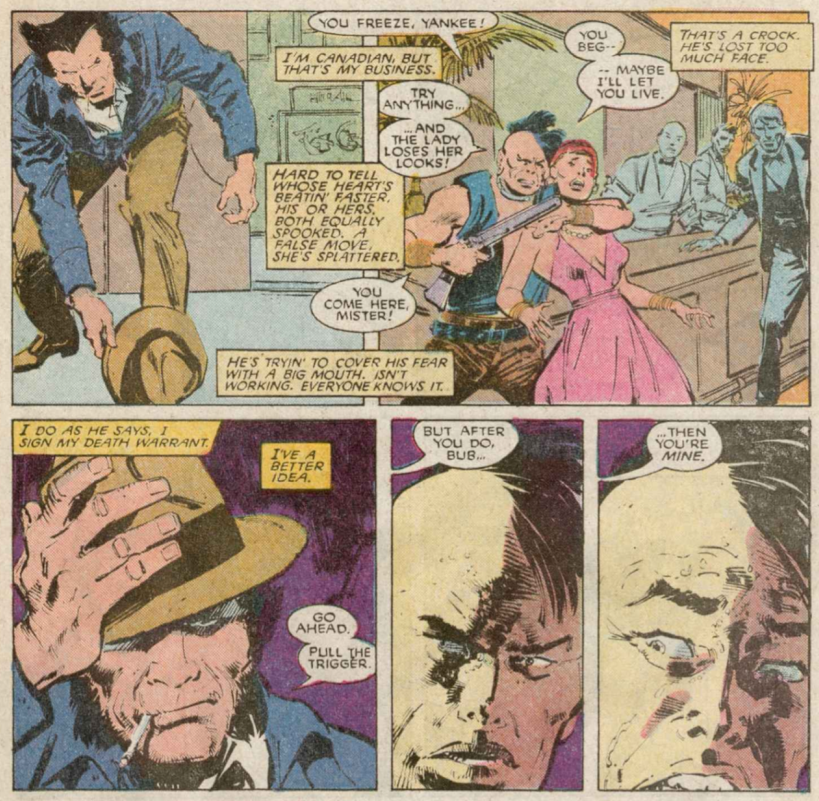 Teebore's Take
As a Wolverine solo story, this is all fairly routine. Noir-ish, first person narration, morally dubious characters with shifting motivations and a plot that involves Wolverine being soundly defeated in one act and emerging victorious against the same foe in another act; the influence of the Frank Miller limited series and even Kitty Pryde & Wolverine is clearly on display. As a setup for the Wolverine ongoing series (which this serial predates then runs concurrent with for a few issues), this is effective enough: we get to know Madripoor (which will be a fixture of the ongoing series) better, Wolverine gets a new femme fatale in Jessan Hoan, and we see Wolverine, chronologically, adopt his Patch identity for the first time.

What really makes this story unique is its structure. As a ten part, eight-pages-per-chapter serial, it reads unlike anything else, at times both as brief as a done-in-one and at other times as long as a multi-part narrative. The cliffhanger-every-eight-pages helps keep the pacing brisk and the story moving, even if many of the beats are things we've seen before. I have no idea how well this would read in bi-weekly installments (in one sitting, it gets bit more tedious than the creators likely expected; twice, for example, we see Jessan's kidnapping by the Reavers and rescue by the X-Men recapped. As a bi-weekly serial, this is essential; read in one sitting over the course of an hour, you wonder if those pages couldn't have been better used showing something else), but as a complete story, it's not nearly as bad as I was fearing. By no means essential reading for any but the most die-hard Wolverine completists (the Frank Miller limited series essentially tells the same story, better), but not a bad read either, and an interesting exercise in form.