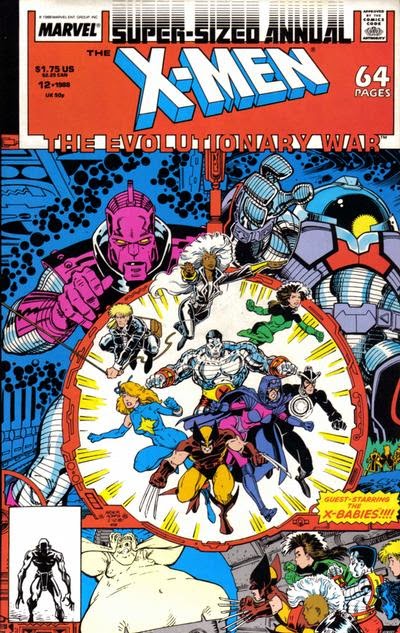 In a Nutshell
The High Evolutionary restores the Savage Land

Plot
In Australia, Storm is suddenly compelled to race to the Savage Land. Tracking her, the X-Men follow via Gateway, arriving to find the once verdant land empty and desolate. Reading the psychic history of a bone, Longshot recounts to the X-Men the destruction of the Savage Land at the hands of the alien Terminus. Storm also discovers survivors of his attack, members of various Savage Land tribes, including the X-Men's friend Nereel, who managed to safely travel to an otherdimensional world in the wake of Terminus' attack. Just then Terminus resurfaces, attacking the X-Men as well as the High Evolutionary, who has journeyed to the Savage Land with hopes of restoring it. Defeating Terminus, they discover Garokk inside the armor, compelled by an outside force to pilot it. The High Evolutionary convinces Garokk to lend his life force to the recreation of the Savage Land, and together, they manage to restore the land to its original state. In the wake of the Savage Land's resurrection, the remaining tribespeople come together as the United Tribes, and though Psylocke alters their memories to forget the X-Men, they remember the legends who helped restore their home.

2nd Story: Mojo, enraged at having lost his connection to Psylocke's bionics eyes after the death of the X-Men in Dallas, holds a casting call for new stars to perform for his audience. A variety of different X-Men appear, all of whom displease Mojo, until the X-Babies emerge. The unruly kids clash with Mojo's troops and rescue the enslaved Ricochet Rita, and when Major Domo points out their antics are causing the highest ratings ever, Mojo attempts to capture them. But the Babies and Rita ultimately escape.

Firsts and Other Notables
The Savage Land, which was destroyed by the alien Terminus in Avengers #257 and which, in a stunning bit of continuity that would never happen today, remained an empty husk thereafter throughout Marvel's various titles, is returned to normal in this issue, with the native survivors of its destruction, as well as Savage Land mainstays Ka-Zar and his wife Shana the She-Devil, returning to the land after it's been restored.

Garrok the Petrified Man, last seen menacing the X-Men in issue #149, returns, and helps the High Evolutionary restore the Savage Land to normal. No explanation is given for how he survived the fall he experienced in issue #149, nor why he looks like he did in issue #116 as opposed to his half-melted/crystalized form from #149. 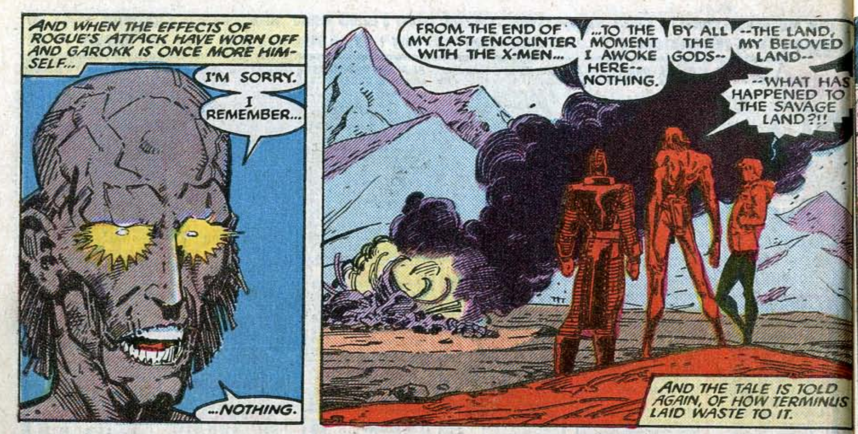 His priestess Zala, last seen in issue #116, also returns, having become the High Evolutionary's lab assistant. She seems familiar to Havok, a hint at her relationship to Polaris, which will be explored in future issues. 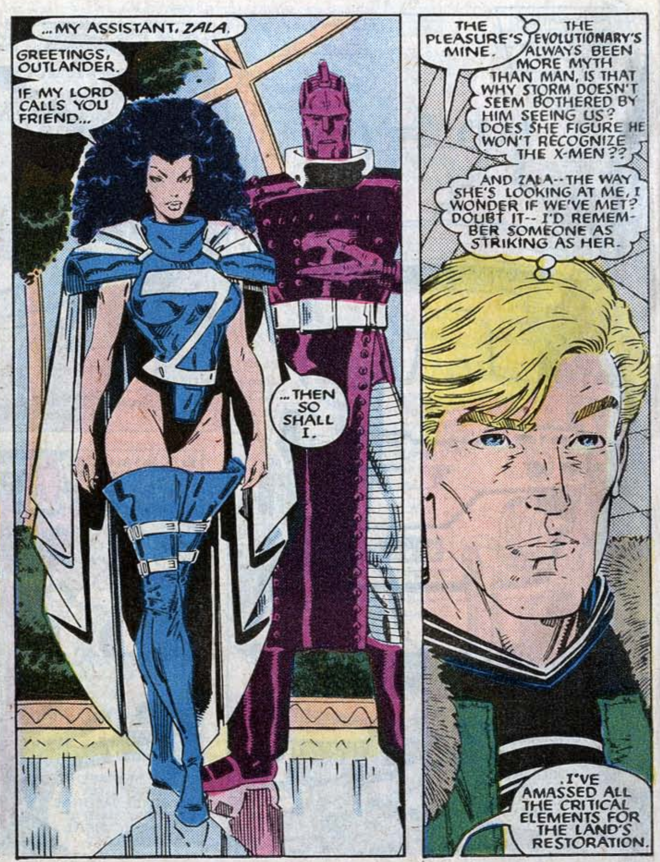 With her are the Savage Land mutates, who are plotting something nefarious. We'll next see them working for Zala in issue #249.

It's revealed that some of the native Fall People survived the destruction of the Savage Land by crossing dimensions to the world ruled by M'Rin, a world encountered by Storm in the back-up story of Classic X-Men #22. 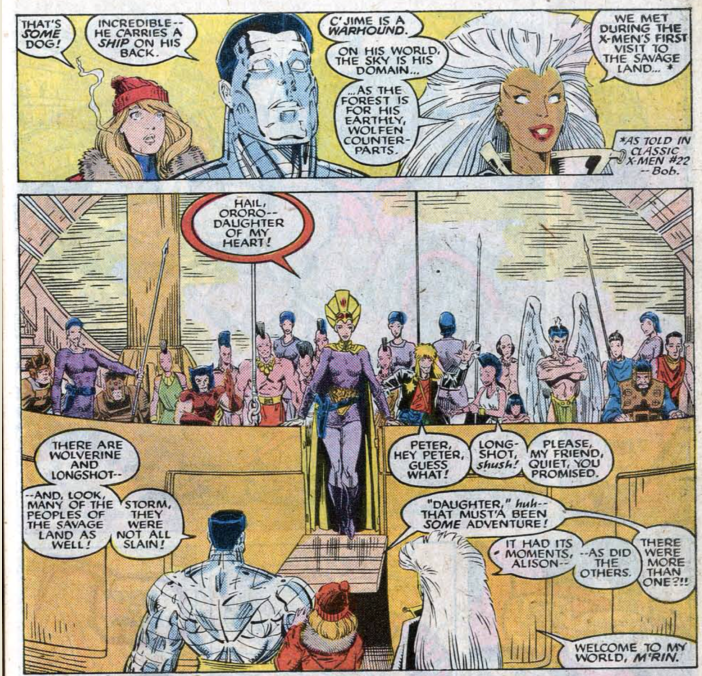 It's heavily implied this issue that Nereel's son Peter is Colossus' son, though Colossus remains naively ignorant of this fact. Nereel is the woman with whom Colossus snuck off to Pleasure Island during the X-Men's stay in the Savage Land circa issue #114. 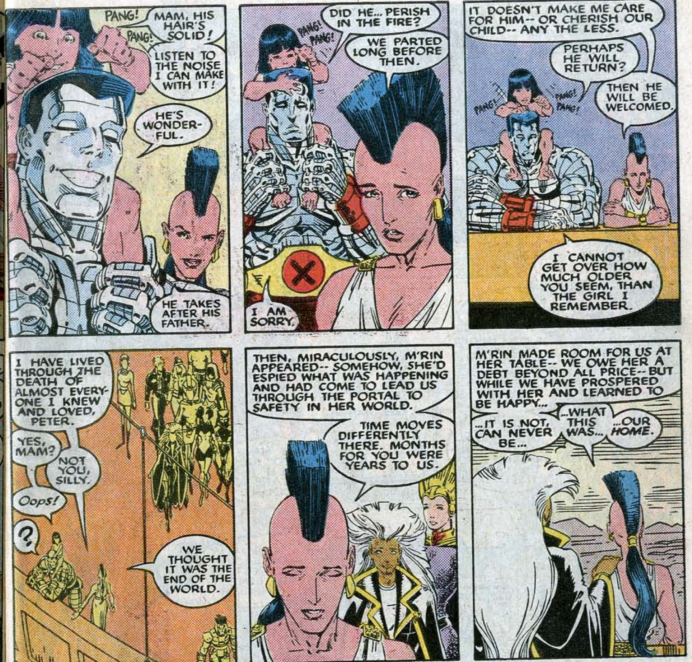 This issue's second story, also written by Claremont and drawn by Art Adams, features the return of Mojo and the first appearance of the X-Babies as separate entities (as opposed to de-aged versions of the X-Men). The X-Babies will continue to make occasional appearances in back-up stories and one-shots, becoming something of their own little sub-franchise along the way. 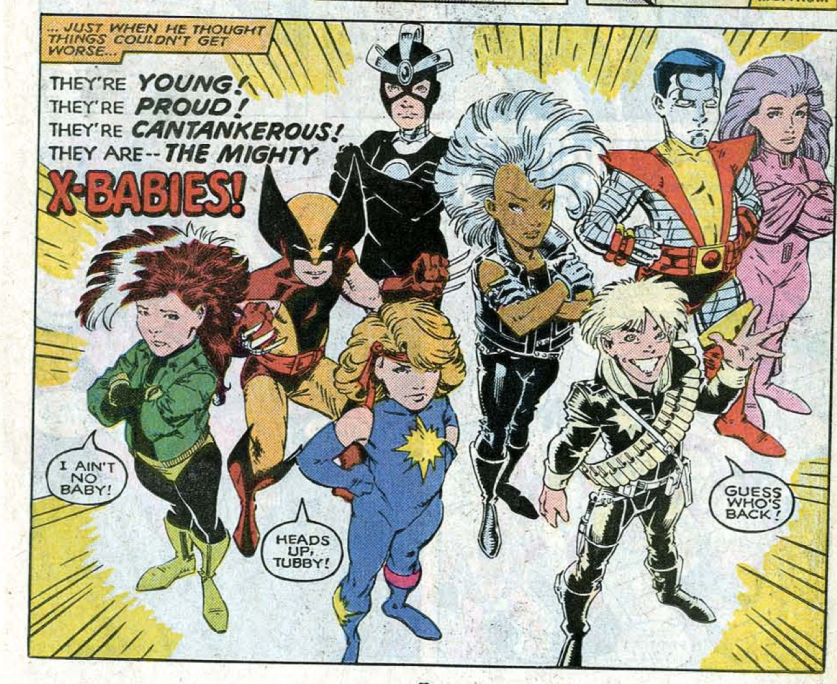 The Chronology Corner
Between this and issue #235, the X-Men make a brief appearance in Alpha Flight #61.

A Work in Progress
The X-Men are teleported from Australia to the Savage Land wearing winter coats. Why? They don't need them in Australia, and Wolverine knows the Savage Land is tropical even though its in Antarctica.

Storm has Psylocke subtly alter the memories of the Fall People so that they don't specifically remember the X-Men as being the people who helped them, in order to preserve the "the X-Men are dead" ruse. 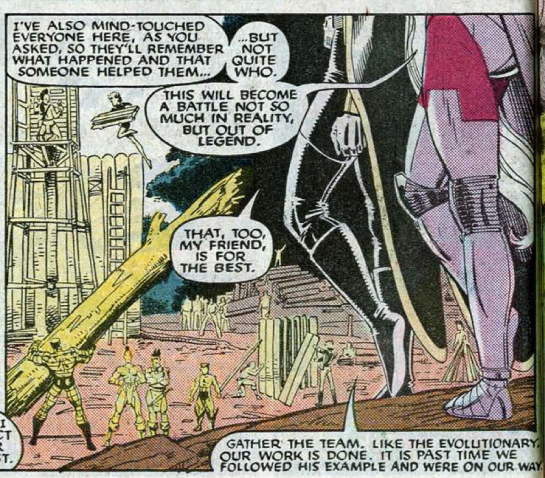 In the village, the X-Men leave behind an obelisk bearing the star logo Madelyne was designing in issue #232. 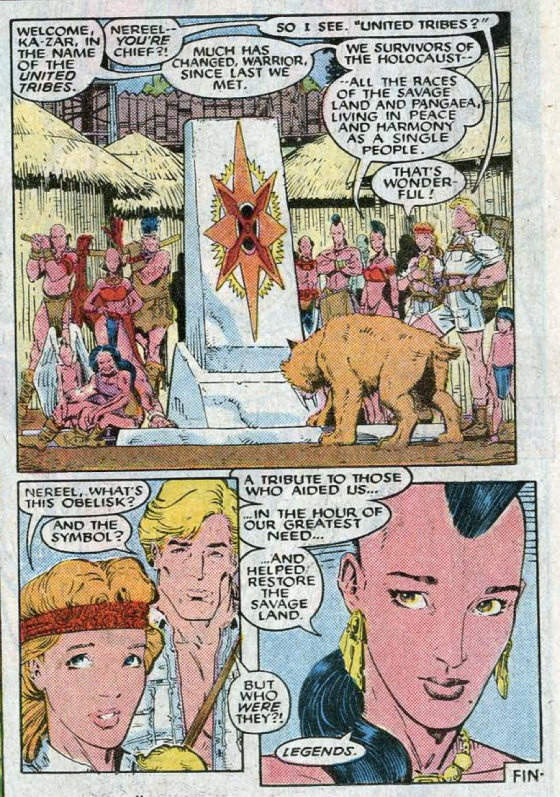 The second story is built around the fact that Mojo is no longer able to spy on the X-Men via Psylocke's bionic eyes, bringing to an end that creepy little status quo. We also see Ricochet Rita freed from enslavement by the X-Babies.

Mojo sending the Warwolves after Phoenix in Excalibur Special Edition #1 is also referenced.

I Love the 80s
Dazzler continues to complain about Wolverine's cigar smoking throughout the issue. 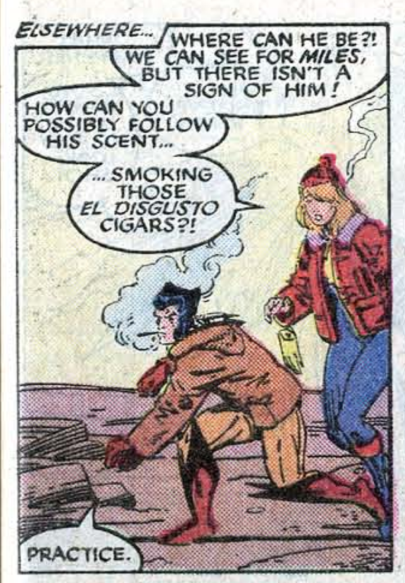 In the second story, Mojo employs the Brain Trust, a group of creators who resemble the creators involved in the creation of this issue, with the Chris Claremont stand-in arguing that quality, not quantity, is what matters. 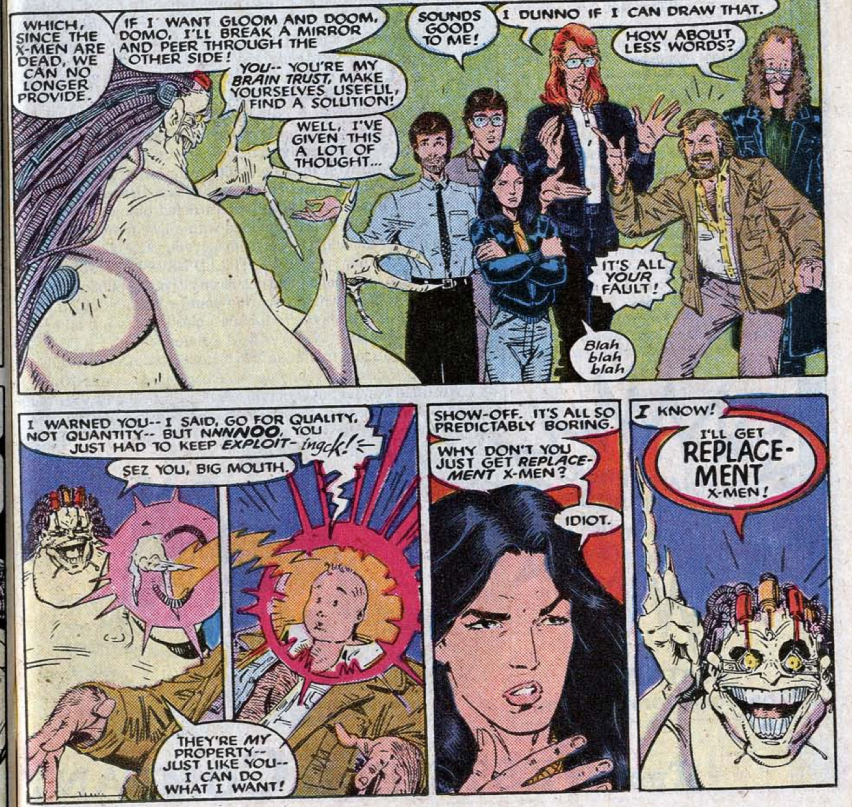 Claremontisms
Dazzler uses her solid photon beam to launch herself into the air, a neat trick that I don't think gets used too often outside this issue. 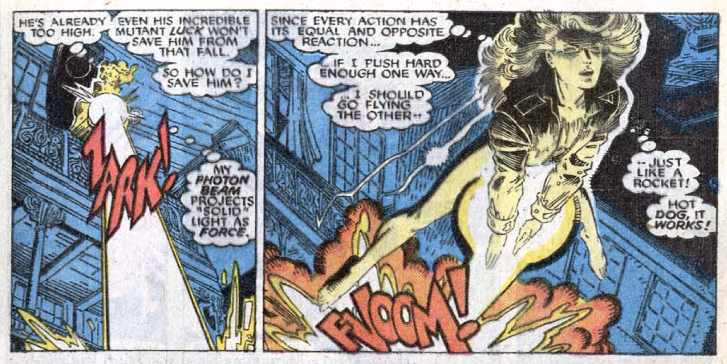 Young Love
Longshot and Dazzler are officially an item as of this issue, or at least knocking boots, as Storm's updraft accidentally pulls a half-dressed Longshot out of his room, after which Dazzler quickly emerges sans pants but wearing Longshot's jacket. 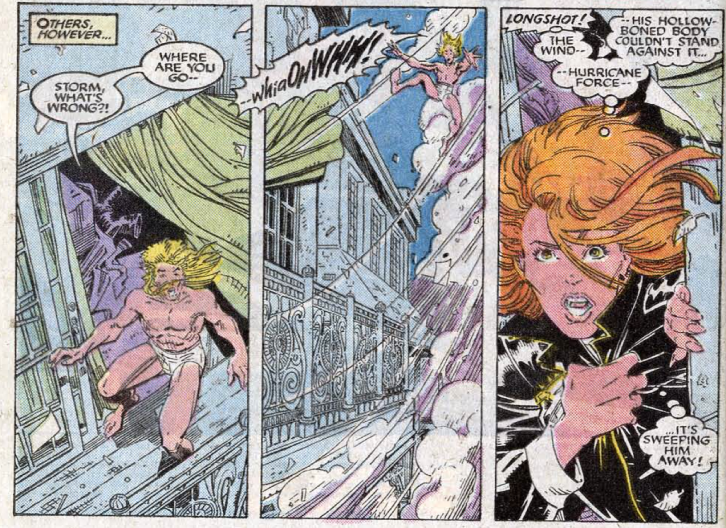 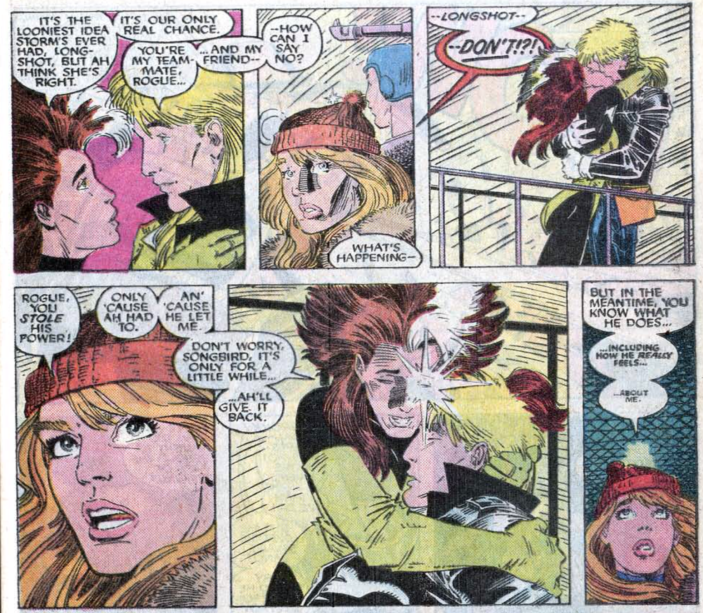 Teebore's Take
This is the classic example of a mediocre annual succeeding thanks to the presence of Art Adams. While the resurrection of the Savage Land is certainly an important event in the greater narrative of the Marvel Universe, story-wise, there's not much here to get too excited about: The Savage Land, callbacks to a random Classic X-Men backup story, Zaladane and Garrok (remnants of the least-exciting leg of Claremont and Byrne's "World Tour" storyline), the High Evolutionary (with an appearance that is less about progressing the "Evolutionary War" storyline than it is a generic guest appearance, so...sorry to anyone checking this out hoping for the next big development in that crossover). None of this is terribly exciting in and of itself, and would be downright boring without Adams on hand.

The second story, meanwhile, is much more entertaining. Mojo and the X-Babies work best in small doses (as in here), and Claremont is clearly having fun satirizing the way commercial interests can dominate the creation of art (an early glimpse at some of the feelings that will ultimately lead to his departure from the series). That story, plus having Adams on hand to at least make all the stuff in the main story more fun and exciting to look at than it is to read, keeps the entire issue from being a complete wash. It's still better than most of the other non-Adams drawn annuals, but it's easily the weakest of that lot.