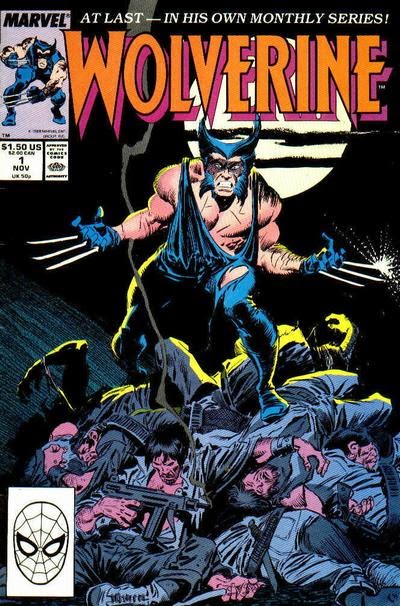 In a Nutshell
Wolverine battles pirates in search of the Muramasa Blade.

Plot
On the island of Telambang, a group of pirates led by Banapur Khan brutalize the surviving passengers and crew of a crashed jet liner. As Khan fights the captain, Wolverine sneaks onto the island and tracks down a brutally beaten man named Kojima. As he frees Kojima, Khan and the pirates discover him, and a fight breaks out, during which Wolverine kills all the pirates. As Khan tries to escape, he's shot by one of the flight attendants. Returning to Kojima, Wolverine is told by the dying man, who is Mariko Yashida's personal sectratary, that the pirates were hired by the Cult of the Black Blade, who are after the Muramasa Sword. When they learned Mariko was transferring the sword from America, the cult hired the pirates to learn the identities of the couriers. Though Kojima doesn't know who the couriers are, he tells Wolverine they are arriving in Madripoor tomorrow. 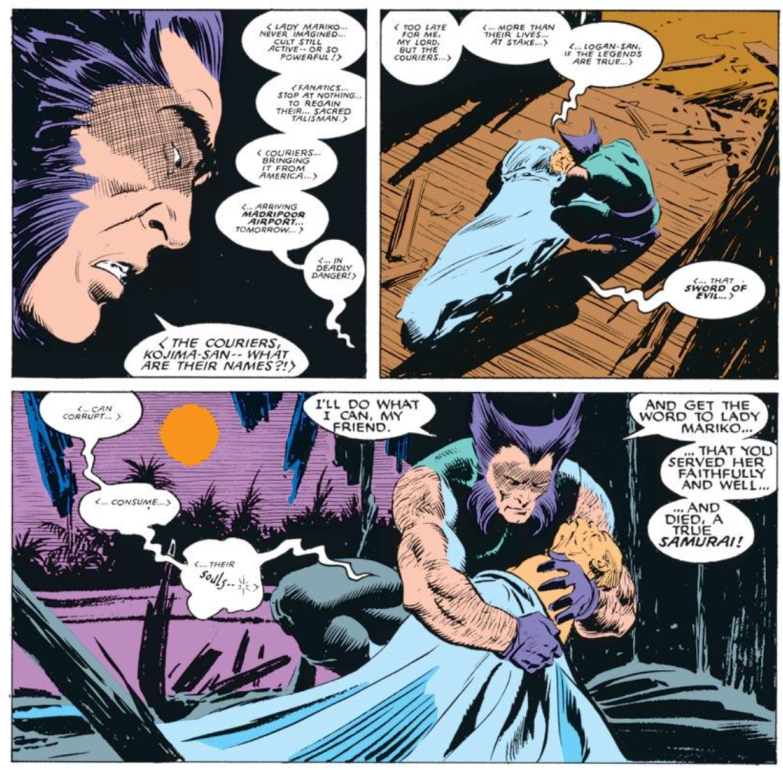 The next day, Wolverine stakes out the Madripoor airport, and spots Lindsay McCabe, Jessica Drew's roommate, entering the country. When she attracts the attention of some local thugs, he decides to follow her. In Hightown, Jessica checks into her hotel room, but is attacked by three agents of the Cult, looking for the blade. Just then, Wolverine bursts into the room and takes out the thugs, being careful not to use his claws so as to keep his identity, and faked death, a secret. Wolverine tells McCabe he's a friend, and that Kojima is dead. She doesn't believe it, as she just spoke to him, but Wolverine assures her whoever she talked to wasn't Kojima. This worries McCabe, as her partner, Jessica Drew, has the sword, and is on her way to meet with whomever is posing as Kojima.

Firsts and Other Notables
This issue introduce the Muramasa Blade (though we don't actually see it), aka the Black Blade, a mystical sword said to be imbued by the madness of Muramasa, its creator, which possess those who wield it (and grants them increased strength and durability), save for the warrior destined to be its master. It serves as the MacGuffin of the first story arc in this series, and is different than the later Muramasa Blade which featured heavily in recent Wolverine story arcs, which was forged with a piece of Wolverine's soul and was able to counteract his healing factor and permanently wound/kill him.

The Cult of the Black Blade is also mentioned for the first time, which is, as the name suggests, a group dedicated to worship of the Muramasa Blade. The cult is said in this issue to have gained prominence during Japan's pre-war militarism, but was mostly snuffed out by MacArthur after World War II.

Claremont kicks off the series by importing some supporting cast members from other series he's written, starting with Lindsay McCabe, Jessica Drew, the former Spider-Woman's, roommate whom the X-Men met in Uncanny X-Men #206. Drew herself is mentioned, and will appear next issue.

As with Excalibur, this series is printed on higher quality Mando paper, is ad-free, and, as a result, costs $1.50 an issue rather than $1.00. Unlike Excalibur, however, this series wasn't direct-only (meaning it was sold in comic shops and newsstands, because newsstands still existed in 1988). The back cover features a Wolverine pin-up by John Byrne.

The cover of this issue has become somewhat iconic, though much of that just comes from it being the cover to the first issue of Wolverine's solo series, which, of course, commanded top dollar for a few years there during the speculator boom of the early 90s.

As with Excalibur, this is a series that I didn't start reading regularly until around issue #70 (just before the "Fatal Attractions" crossover in #75) and thus, I am reading most of these issues for the first time rather than the umpteenth time. So smaller details or characters that seem minor but become important later on may get missed, and/or I may need to rely on outside sources more to catch certain things. As always, I expect everyone to call out things I may have missed in the comments.

The Chronology Corner
Thinks start to get dicey here, in terms of Wolverine's chronology, as he now shares appearances between this series and X-Men. For the most part, Claremont does his best to write each series around the other, creating opportunities for Wolverine to leave or arrive from one adventure or the other, thus creating touchstones to allow the appearances to fit together.

But Claremont won't stay on this title for long, and later writers are less concerned with coordinating their title character with his parent title. I will do my best to callout the chronology as best I can (with the help of the Official Marvel Index), but be warned: it may get confusing, and will get complicated, at times.

To wit, this issue follows on directly from Wolverine's appearance in Marvel Comics Presents #1-10, and thus occurs between issues #231 and #232 of X-Men. Wolverine then appears in issues #2 and #3 of this series, before returning to X-Men for issues #232-243, Annual #12, and all of "Inferno" before returning for issue #4 of Wolverine.

A Work in Progress
Wolverine wears his Patch costume in the first half of the issue, which debuted simultaneously in this issue and the concurrent issue of Marvel Comics Presents, though he isn't yet wearing the eyepatch that gives him his name, opting somewhat laughably instead for a strip of nylon over his eyes. 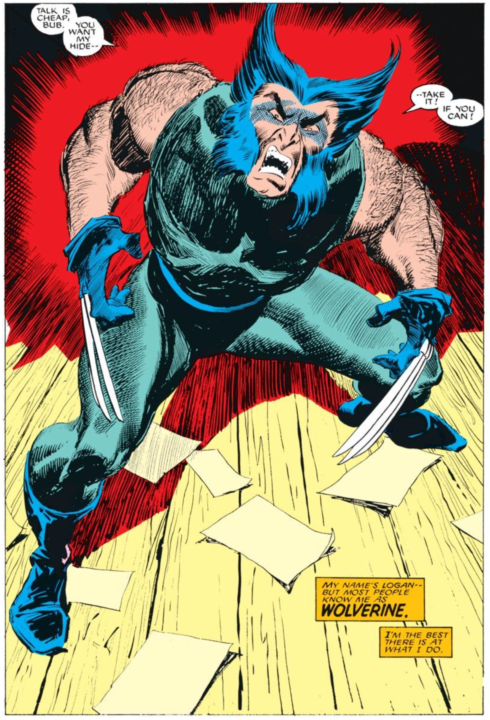 He's able to brush off several gunshots from an Uzi thanks to his healing factor, continuing the gradual uptick of his power level.Wolverine also states that his healing factor is what makes his senses super acute, something that has long been implied, but is, I believe, made explicit for the first time here. 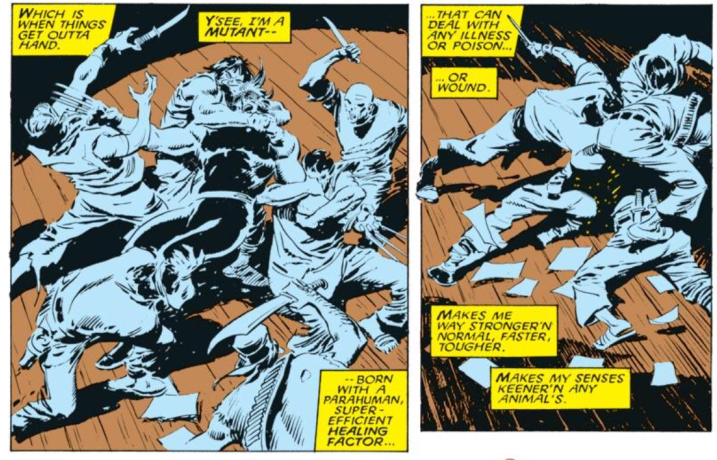 While attacking the pirates, Wolverine makes it clear he's more interested in balancing the scales of justice than adhering to the X-Men's usual code of conduct ie he's going to kill people in this series. 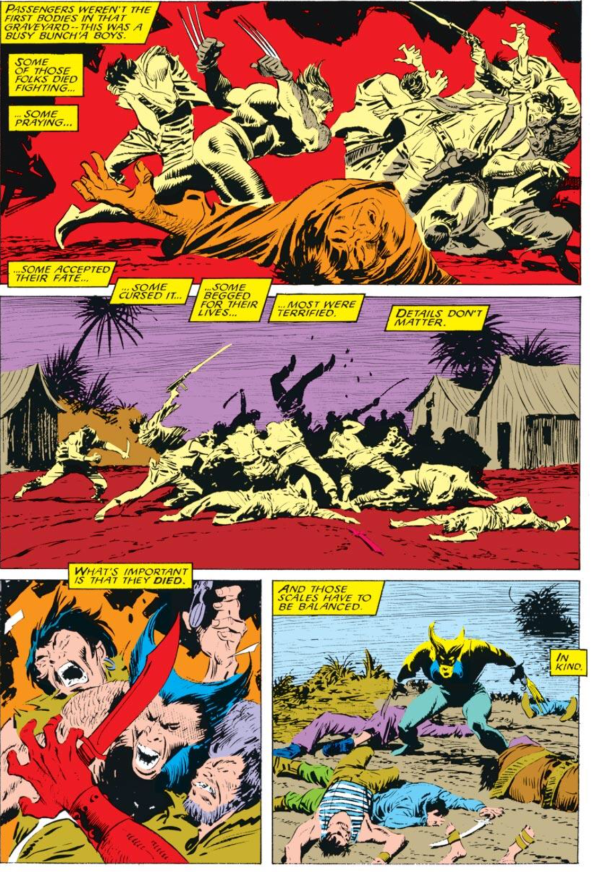 In order to disguise himself from McCabe, Wolverine wears a bomber jacket and fedora, and covering up his wild spikes of hair proves to be a much more effective disguise than covering up his eyes. To maintain that disguise, during a fight, Wolverine refrains from using his claws, which would be a dead giveaway of his identity to McCabe.

In Days of Yore
Wolverine mentions that Douglas MacArthur's counter-intelligence operatives were said to have wiped out the Cult of the Black Blade during America's post-WWII occupation of Japan, and includes himself in that group. Unlike some of the other cryptic hints about his past, I don't think we've ever seen a story featuring Wolverine working for MacArthur in Japan after World War II, and it doesn't quite gel with later stories that show him to specifically be a Canadian solider during the war.

I Love the 80s
Lindsay McCabe says that she learned how to shoot from Clint Eastwood. 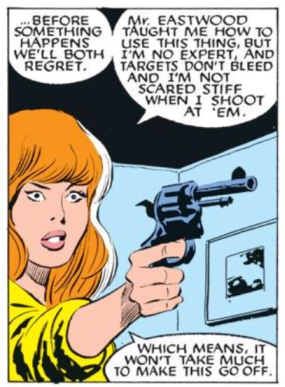 Chris Claremont on the creation of Wolverine
"I had this big argument with the Editor-in-Chief...it was a philosophical disagreement. My feeling with Wolverine was, and still is, less should be more. He would be better served by a six-issue limited series every year that could be bundled into a trade paperback or a hardcover. You could get guys who normally wouldn't write X-Men and treat each Wolverine novel as an event. That way we satisfy the readers' desire for Wolverne during the peak sales period without supersaturating the marketplace."

Teebore's Take
The cover of this issue proclaims "at last -- in his own monthly series" and while it certainly is a bit surprising, given the character's commercial viability even in those days, that it took Marvel until 1988 to give Wolverine his own series, this definitely reads like a continuation of previous Wolverine solo ventures. Of course, much of that comes from the series launching with the same creative team as handled the Wolverine feature in Marvel Comics Presents (making this feel as much like an issue #11 as a first issue), but it also continues the same tough guy, first person narration pioneered by Claremont and Frank Miller in the original Wolverine limited series, back in 1982, complete with the same film noir vibe that inspired that story, right down to the MacGuffin that drives the plot (the Muramasa Blade could be the Maltese Falcon or jade monkey or whatever).

Two things of note occur in this issue which help differentiate it from what's come before: Wolverine is forced to hide his identity, even to the point of not using his claws at one point, and he distinctly notes that while on his own, he won't be playing by the X-Men's rules. The former is more a necessary nod to the current "faked their death" status quo of the X-Men than anything, but kudos to Claremont for dealing with it (most modern writers wouldn't bother), and there is story potential in the idea of Wolverine needing to refrain from using his signature weapons even while it's largely laughable that he thinks an eye patch or a hat is enough to disguise him from people who know him.

The latter note, while not terribly shocking (the Wolverine of the Miller LS certainly didn't play by the X-Men's rules either), at least creates a clear demarcation between the Wolverine of this series and the Wolverine of X-Men. This will be less "Wolverine the Superhero" and more "Wolverine the Violent Vigilante", more akin to the Punisher than Spider-Man. He will kill, when necessary, and he won't always talk or angst about it. It's an obvious but important distinction to make at the start of a new series, one which keeps the character firmly rooted in what's come before while making it clear what makes this presentation of the character different.