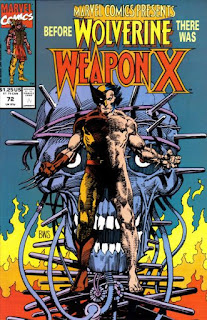 In a Nutshell
The details of how Wolverine received his adamantium skeleton.

Plot
Downtrodden Canadian secret agent Logan is targeted by a mysterious group conducting Experiment X. He is captured and, against his will, undergoes an extremely painful process in which adamantium is bonded to his bones. Unbeknownst to everyone involved, Logan is a mutant, whose ability to heal quickly helps him survive the process. He also unexpectedly develops three adamantium claws on each hand. In the aftermath of the bonding process, the leader of the project, a man known as the Professor, attempts to condition the nearly-savage Logan, altering his behavior, honing his fighting skills, and making him loyal to the Professor. Following an extended virtual reality scenario in which Logan believes he's hunted down and killed the Professor, chief scientist Dr. Cornelius, and Cornelius' assistant Miss Hines, he's noticeably more calm and docile. However, realizing what he's become, he attacks his handlers, fighting his way into the facility and to the Professor's lab, before departing alone into the snowy wilderness.

Firsts and Other Notables
This story marks the first concerted effort to tell a Wolverine origin story, and "Weapon X" will quickly cast a large shadow over the character, working its way into the Wolverine ongoing, influencing other titles (like X-Force), and becoming a consistent presence throughout the X-books, to the point that a Weapon X series will run for a couple dozen issues in the 00s.

Though Wolverine has been referred to as Weapon X in the past, this story ties that codename with the process which bonded the adamantium to his bones. Later, Grant Morrison will establish that the "X" in "Weapon X" is not a letter but a roman numeral, and that the Weapon X project is but one facet of the larger Weapon Plus project, which began with Operation: Rebirth and the creation of Captain America (considered Weapon I).

The image of the post-bonding Wolverine, wearing a sensory helmet and strapped down with monitoring equipment, has become something of an iconic one, and the 90s X-Men toy line even produced a "Weapon X" figure with that design.

This story is written and drawn by Barry Windsor-Smith who, amongst other things, collaborated with Chris Claremont on the Wolverine/Lady Deathstrike brawl in X-Men #205 and the two "LifeDeath" stories.

Issue #72 marks the first appearance of the Professor, the individual running the Weapon X project at this time, and Dr. Cornelius, the chief scientist working on the project. Both will appear again in later stories, with the Professor eventually revealed to be a cousin of Wolverine's (presumably, at the time, Windsor-Smith was simply playing with the irony of a bald man called "Professor" being responsible for giving Wolverine his adamantium and trying to make him a better fighter). Both characters also eventually appear in animated form thanks to the X-Men cartoon. 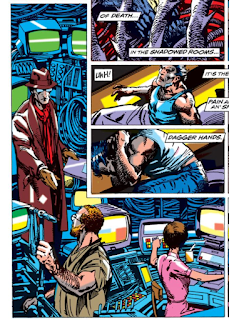 At various times throughout the story, the Professor is shown to be taking orders from a higher power, someone who knows more than he's let on and seems perfectly willing to sacrifice the Professor. This person was, at the time, meant to be Apocalypse (following on from a hint at a past between Wolverine and Apocalypse from The Jungle Adventure), as Windsor-Smith discussed this story with Chris Claremont and Claremont told him he was planning to establish Apocalypse as being responsible for Wolverine's skeleton. Of course, Claremont left the X-Books before establishing that connection, and eventually, the mysterious individual talking to the Professor in this issue was revealed to be Romulus, the less said about the better.

In issue #73, it's noted that Wolverine is targeted for the project because of his skills and his remarkable stamina, but the fact that he's a mutant with a healing factor is unknown to everyone involved until after they begin working on him; later stories will retcon this idea, saying that Wolverine was specifically chosen for the adamantium bonding process because of his healing factor, that it would ensure he'd survive the process when it had killed others. 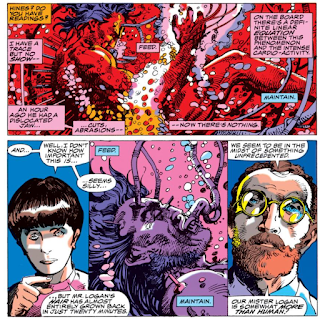 Similarly, issue #74 notes that an excess of the metal is gathering in Wolverine's hands, making it clear the claws weren't part of the project's goals originally, something which actually fits (entirely accidentally) with the later reveal that Wolverine has always had bone claws which were simply bonded with adamantium like all his other bones, resulting in his famous claws.

The Chronology Corner
This represents the oldest point in time which readers have seen Wolverine at this point (though they knew he had served in WWII at this point): previously, we'd see him in what we now know is the aftermath of this story, running wild in the Canadian wilderness where he's found by the Hudsons and nursed back to some semblance of humanity, in Alpha Flight. This story takes us back one step further.

A Work in Progress
Even pre-experiment, Wolverine notes that he doesn't know who his mother is.

Though the entire process of bonding adamantium to Wolverine's bones is commonly referred to as the Weapon X project, throughout this story the term "Experiment X" is used more regularly.

Issue #76 shows the Weapon X project trying to suppress Wolverine's identity, something that will become a significant plot point later in Larry Hama's run on Wolverine. 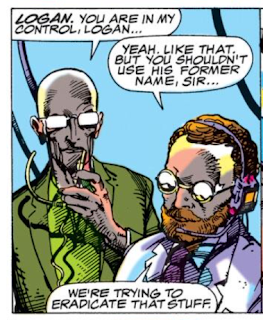 The Best There is at What He Does
The Professor notes that Wolverine can't heal if he's in pieces, though later stories will suggest otherwise.

Teebore's Take
Often billed as the origin of Wolverine, "Weapon X" isn't, really. More specifically, it's the origin of Wolverine's adamantium skeleton, and maybe this is just because I grew up reading comics knowing the general idea behind it, but "he got it via a shadowy government experiment" isn't the kind of answer that necessarily cries out for a thirteen part story, as revelatory as that idea might have been to readers in 1991 starved for details about Wolverine's past. Nevertheless, despite being fairly light on plot, "Weapon X" works exceedingly well as a story (if not an origin story).

And that's all down to writer/artist Barry Windsor-Smith, who takes a small tale about a big event in an extremely popular character's life and tells it extremely well. As much as this is considered the definitive Wolverine origin story, Wolverine himself barely has any dialogue or first-person captions in it. But Smith manages to render the three main characters (the nefarious Professor, the dubious Dr. Cornelius, and the in-over-her-head Hines) well enough that they can carry the story, even while the title character is sidelined or in a state of incoherent pain or rage for most of it. He also tells the story in interesting ways, such that the telling itself is entertaining even if the story is mostly straightforward: shifts in perspective from character to character, using narrative captions more often than dialogue bubbles, juxtaposing the hard angles of the panels and captions against the smoother lines of the tubes and bubbles during the bonding process, and rendering the whole thing in a muted cacophony of colors, so that the whole thing is bright and overwhelming (as it would look from Wolverine's perspective) yet dark and dismal (which is the feeling of what is actually happening) at the same time.

Even the serial nature of Marvel Comics Presents, usually such a hindrance to the stories contained in its pages, helps. This is easily the most cohesive story yet in the title, as Windsor-Smith eschews handing over a page or two each chapter to recapping the previous one, letting the story flow directly from chapter to chapter. But because the plot is fairly minimal, each chapter can do less, and so the shorter page count-per-chapter is less jarring, quickening the pace of the story without rushing it, allowing the issue-ending cliffhangers to develop more organically (and be more subtle). Even more impressive, at thirteen chapters long, this barely feels padded (the final twist - that the entire sequence of Wolverine hunting down the Professor, Cornelius, etc. was just a simulation - is the one thing that feels extraneous, like Windsor-Smith reached the end of that sequence but realized he still had one more chapter to go). The end result isn't necessarily the jaw-dropping origin of Wolverine it's often purported to be, but it is nevertheless a stunning story in its own right, a marvelous bit of craftsmanship by its creator that deserves the acclaim it routinely gets.

Next Issue
Next week, Deathtrap: The Vault!