Game of Thrones 4x05: First of His Name 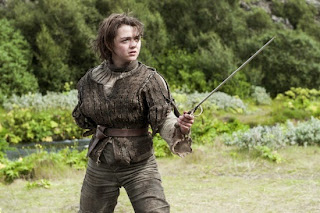 King's Landing
We have a new king! It's Tommen and the crowd goes wild at his coronation. I'm not sure if they're cheering out of obligation, because they like Tommen or just the fact that he's not Joffrey. I mean, after Joffrey, I'd cheer for Justin Bieber!

Margaery is making eyes with Tommen and Cersei notices this. Cersei talks about what douche Joffrey was with Margaery but Margaery plays it cool. Cersei then seems to endorse the pairing of Margaery and Tommen. I almost think she's sincere about this but when has Cersei been sincere about anything?

Later, Cersei talks with Tywin about the Margaery/Tommen marriage and the marriage between herself and Loras Tyrell. Again, she seems sincerely onboard with this. Then the bomb is dropped that the famed Lannister gold mines are dry. So the kingdom needs the Tyrell's money in order to pay back the Iron Bank. So, I suppose you could say, the Lannisters used to dig for gold but now they're gold diggers! I'm here all night folks.

After talks of marriage and money Cersei brings up the trial. Tywin says they can't talk about it since he's a judge and Cersei understands. But, before leaving, she has to ask Tywin what Tyrion deserves for lighting the future of the Lannisters on fire.

Cersei's poisoning of the well continues as she meets with Oberyn. She, of course, assures Oberyn that Tyrion killed Joffrey. Then they talk children and how Cersei has missed her daughter's name day. Oberyn assures her Myrcella is safe. Cersei wants Oberyn to bring Myrcella a sail boat that was built as a gift. He agrees.

Meereen
Joffrey's death reaches Daenerys. There is talk of sailing to Westeros! Of course we can't have that. So news comes in of Astapor and Yunkai falling out of Daenerys' control. Apparently conquering a city and immediately leaving it with only a skeleton crew to rule isn't the best practice. Who knew? So, Daenerys forgoes forward plot movement in lieu of getting Slaver's Bay back in order.

The Vale of Arryn
Littlefinger is bringing in Sansa who must hide her identity since she's wanted as an accessory to regicide. Lysa knows it's Sansa, though, and welcomes her. Robin is also excited to see her and “Uncle" Petyr. Robin then shows Sansa the pit he wanted to throw her husband down.

After the kids leave it turns out that not only are Baelish and Lysa freaky but they like to GET freaky too…in a freaky way! The key points are that Baelish and Lysa have had a thing going for a long time, Lysa poisoned her husband so she could be with Baelish, the Lannisters were framed for the poisoning and Lysa is a screamer in the sack.

Later, Sansa and Lysa are talking. It seems friendly at first but, Lysa being Lysa, she starts to freak out. She accuses Sansa of sleeping with Baelish. Lysa is hysterical while accusing her but it's not like it's the craziest thing to believe. Anyway, Sansa assuages Lysa's fear. So Lysa is excited for Sansa and Robin to be married after Tyrion's execution. Sansa seems less excited. Anyway, Lysa and Littlefinger get married and then they have very loud sex.

On the road to the Vale of Arryn
Everyone's favorite couple are trying to catch some zees. Arya is counting sheep to help her get to sleep. It just so happens that each sheep has the same name as a person she'd like to kill. The Hound tells Arya to shut her yap. They then have some pillow talk about killing The Mountain. Arya turns to go sleep but not before saying The Hound's name. That'll put a damper on their relationship.

The next morning The Hound wakes up to a lack of Arya. He's concerned. Either he's worried his love has left him or that she's about to sneak up on him and slit his throat. Regardless, he finds her sword dancing by the river.

The two trade barbs about the quality of Arya's sword training and the grease content of Joffrey's cunt. In the end, Arya decides to show The Hound what she learned. Her moves are less than effective and Arya receives a punch to the face for her efforts.

On the road to the Wall
Apparently Tyrion's high praise of Podrick meant Tyrion has a low bar for squires. Podrick may have a way with the fillies but he can't ride a filly. Podrick may hump like a rabbit but he can't cook one. Brienne simply isn't impressed. However, they end up bonding over talk of killing people.

Craster's Keep
Bran, Jojen, Meera and Hodor are all chained up. And let me tell you, Jojen starts trippin' balls! He sees a giant tree up a hill in the distance and his hand starts on fire. The point is he knows Bran is going to get out alive because Bran's destiny is to get to that tree in the North. Hopefully that tree is less of a dick.

Karl comes busting in deciding that he's had enough of raping Craster's women and thinks Meera is starting to look good. He ties up Meera and just as I'm about to write a giant rant about Game of Thrones showing sexual assaults three episodes in a row Jojen stops Karl with talk of his precognitive abilities.

Karl asks what Jojen sees and he says he sees Karl's death. Just as I'm about to write a giant rant about Jojen warning Karl of the Night Watch's coming attack and, thus, saving him the Night Watch, led by Jon Snow, show up and totally start swording the mutineers to death.

As the battle wages on Locke makes his way to Bran's hut. He unties Bran and begins to bring him to the cheerfully named Dreadfort which bears the cheerful symbol of the flayed man. However, Bran wargs Hodor. Bran-as-Hodor breaks free of the chains and Locke finds out that Hodor's grip is stronger than Locke's neck. Bran, Jojen, Meera and Hodor opt to head north instead of talking to Jon Snow because people reuniting is all but forbidden on Game of Thrones.

Jon Snow follows Karl into the house and, holy crap, we're actually going to have a showdown between a hero and a villain on Game of Thrones! Jon and Karl sword fight but, this being Game of Thrones, Karl gets the best of Jon. However, before the killing blow, Karl gets stabbed in the back by a Craster woman. Karl turns to slay him a Craster woman but totally gets sworded through the mouth like he's John Connor's foster dad. (Carton of milk not included.)

Anyway, the final mutineer gets jugulared by Ghost and we do, in fact, get a reunion of sorts between Jon and Ghost. The battle is over and Jon offers to take the Craster women back with them. But the Craster women are like, “Dudes ‘round here be assholes. Why the hell would the Night's Watch be different? We'll go are own way, thank you very much.” And so they do. But not before a symbolic burning of Craster's Keep is in order.

Other Thoughts
So, there's like a 13 year old in charge of Westeros now. Monarchy in action!

Daenerys talking of Westeros and Joffrey's death excited me a bit. Not that I'm not breaking new ground here but her story is so disconnected from everything else.

Daenerys' entourage seems to think the people will bow down and welcome a Targaryen reclaiming the throne. Why would they? Have they forgotten what the last Targaryen king did?

I jest about Daenerys deciding not to sail to Westeros but she is right. If she can't take care of Slaver's Bay what hope does she have of ruling the seven kingdoms?

I'm assuming Daenerys' line about "ruling" Slaver's Bay meant that she was just going to get things right there first and then sail to Westeros and not that she has decided not to go to Westeros at all.

As creepy as Lysa was, she was actually less creepy than her last appearance. I suppose not breast feeding your preteen child will have that affect.

I was convinced Baelish was going to murder Lysa shortly after marrying her. I suppose that could still happen.

The Iron Bank can't be reasoned with? I'm shocked that a bank would be unreasonable.

So what would happen if they simply didn't repay the Iron Bank?

A lot of people want to kill The Mountain.

So Arya still wants to kill Joffrey? That might be...difficult.

At first, I hoped Arya would actually get the better of The Hound with her sword technique. Then I remember what show I was watching.

I get that the Lannisters need an alliance with the Tyrells. But is a dual marriage really necessary?

Apparently, Karl was keeping the direwolves alive so they could be used as an alarm system.

So Hodor was only unable to break his chains because of stupidity? Whatever...

No nudity this episode. I was so grateful for the lack of sexual assaults that I count it as a win.