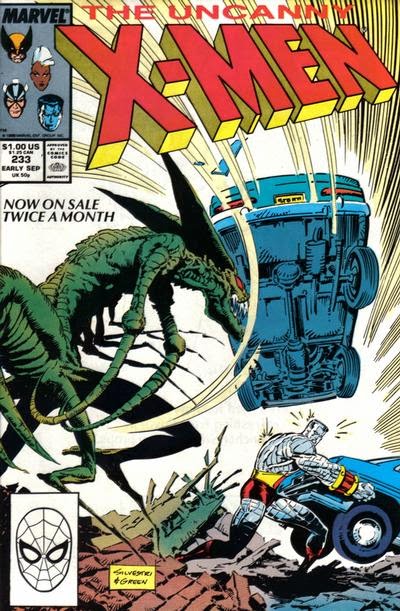 In a Nutshell
The X-Men battle a group of Brood-possessed mutants.

Plot
In Denver, the X-Men are attacked by a group of mutants who have been implanted with Brood eggs by Harry Palmer. Halfway between their human and Brood forms, each possesses a unique mutant ability. As the X-Men battle, they're conflicted about how much force to use against the Brood, considering their human hosts are unwitting victims. During the fight, Rogue, Psylocke and Wolverine are either mentally ensnared or captured. Meanwhile, at the nearby Red Rocks amphitheater, Reverend Conover's ministry is preparing for a large morning service. Elsewhere, Madelyne dreams of having her life with Scott ripped away, her form given to Jean Grey, until she is nothing but an abandoned nothing being. Back in Denver, Havok is forced to use lethal force on a Brood to save Storm's life, and when Colossus emerges from a collapsed warehouse with another dead alien, the losses are enough for Harry to order the Brood to retreat and regroup. When the dead Brood reverts to human form, Havok is horrified, but Storm assures him he's done the man a service, as regardless of his outer form, his life ended the moment he was implanted with an egg. It was Harry Palmer who killed him, she says, and if he and his Brood gang aren't stopped, the Earth is doomed.

Firsts and Other Notables
This issue marks the beginning of the title's bi-weekly shipping, a schedule which saw the series publish two issues a months for three months (May, June, July, ie when kids are getting/out of school, because this was still a time when what kids did mattered to comic book sales). Marvel will continue this "summer bi-weekly schedule" with high profile/high selling titles (always including Uncanny) for the next two years, and it stands as a precusor to the current "double shipping" approach, in which certain titles will publish two issues a month, seemingly at random.

This is the first issue of the series fully edited by Bob Harras, who takes control of the main X-Books this month. He will be, notably and somewhat infamously, the last editor with whom Claremont works before leaving the series.

In the wake of being knocked unconscious last issue, this issue Maddy experiences a downright creepy dream in which her features are, one by one, removed from her and given to Jean, until Jean is whole and Maddy becomes a faceless figure. 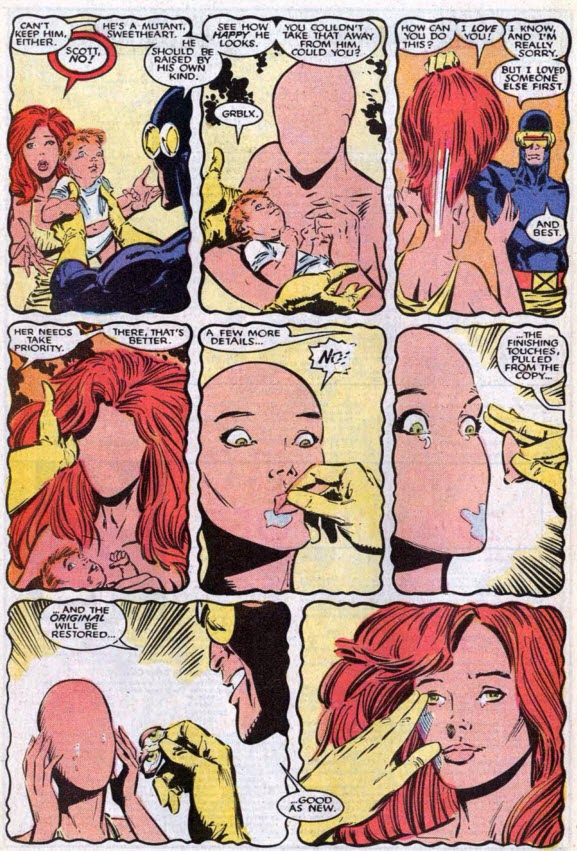 Reverend William Connover and his wife Hannah appear for the first time, setting up a ministry concert at Red Rocks amphitheater. They will factor in the climax of this story, with Hannah appearing again in a two part Brood miniseries during the 90s. 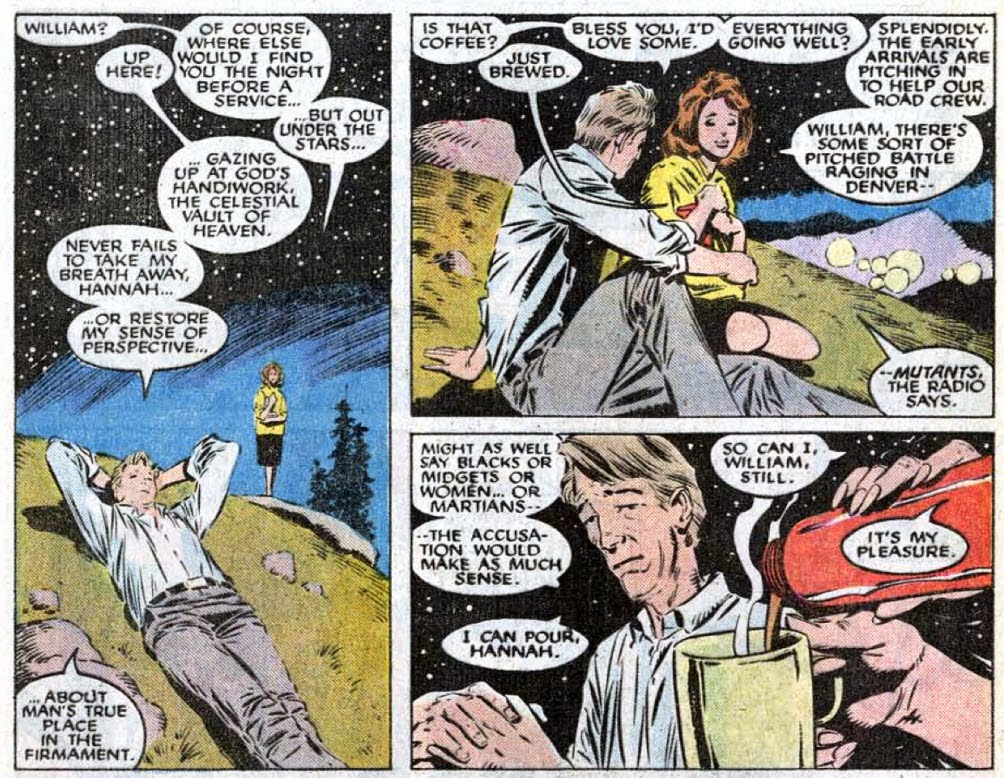 A Work in Progress
As a news reporter films the X-Men's battle with the Brood, it's noted that only the Brood appear on camera, per the X-Men's invisibility to electronic detection.

I Love the 80s
All of the Brood-possessed mutants the X-Men battle this issue have codenames. 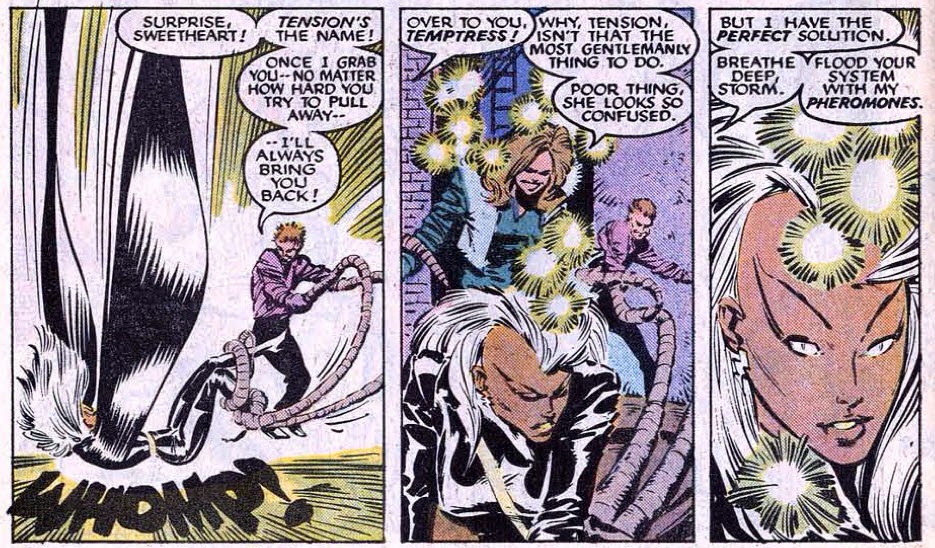 Once again, a fantastic X-Men battle is chalked up to Lucasfilm.

One of the Brood references Top Gun. The Awesome and Terrible Power of Cyclops Havok
Havok worries that hitting a normal human with his plasma beam will kill them. Later, he's forced to kill one of the Brood to save Storm.

After the Brood he kills reverts to human, Havok bemoans that this what he feared since his power first manifested, killing someone with it. 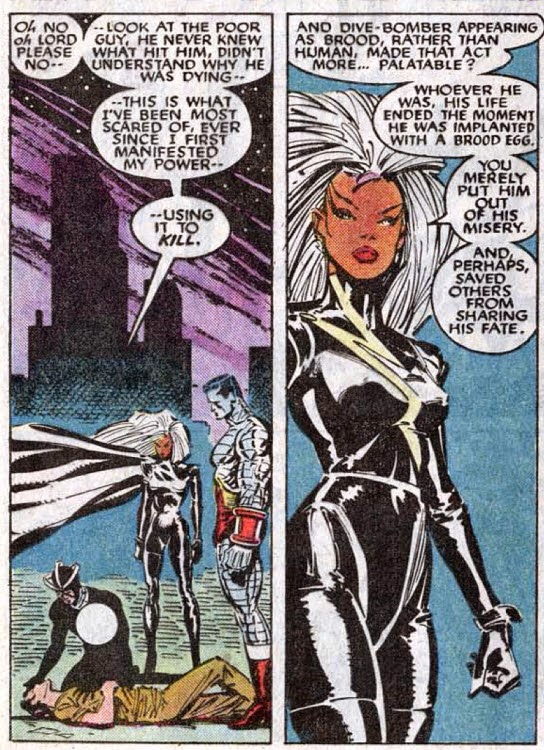 Human/Mutant Relations
Reverend Connover, taking a different tack on mutants than Reverend Stryker, considers mutants to be like humanity's children. 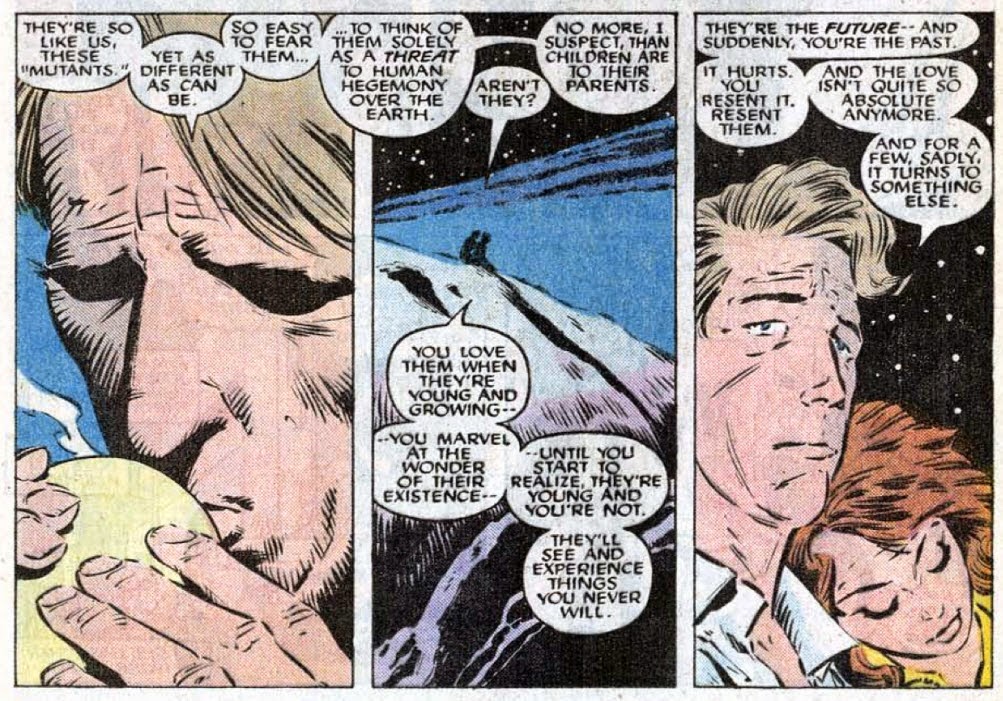 For Sale
The back cover features an ad for Metal Gear. For whatever reason, I was always fascinated by the list of paraphernalia and would often select the items I'd want to have my character in the game use (without ever actually playing the game). 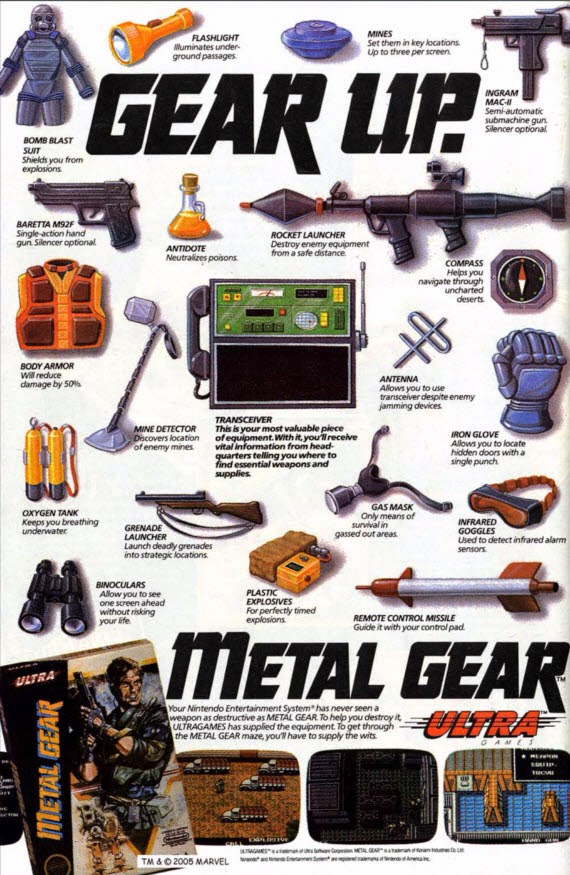 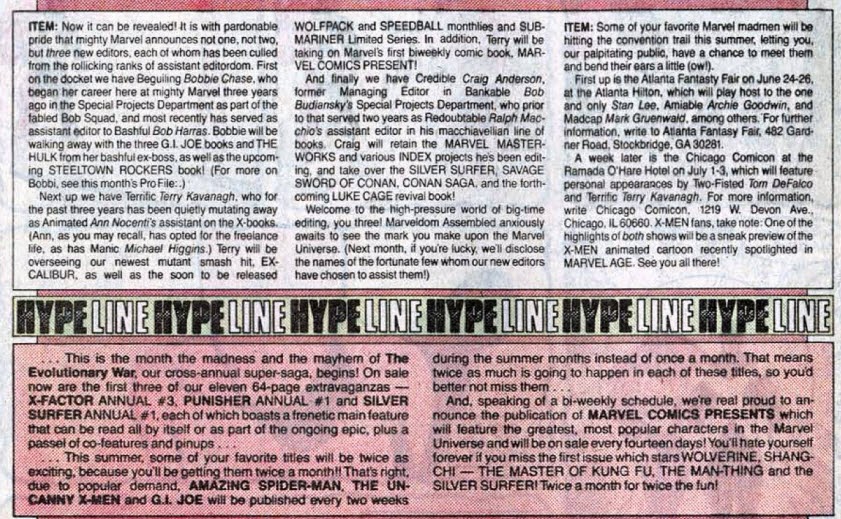 Teebore's Take
This issue, Claremont and Silvestri set aside the creepy horror atmosphere of the last issue for a more straightforward superhero action story. This is heightened by the fact that in a dubious move, each of the mutant Brood are given a codename to go along with their enhanced abilities. While the idea of having the X-Men battle Brood who have taken over mutants is a logical evolution of the Brood/X-Men conflict, giving the Brood super-villain names reads too much like kowtowing to the genre conventions of the time, edging the story too far out of the atmosphere so successfully established last issue.

Meanwhile, this issue also establishes the driving conflict of this arc: how much force is too much force to use when dealing with the Brood-possessed mutants? Claremont wisely centers the "kill or not kill?" debate around Havok, one of the present day X-Men who haven't encountered the Brood before and thus, hasn't experienced first hand just what their possession is like. It should also be noted that this is a debate being carried out in the midst of battle, as the X-Men are fighting the Brood, and not a case of them deciding what to do with vanquished foes (as with the Reavers), keeping the Siege Perilous option off the board. The question of whether the X-Men should kill this batch of Brood is, along with the atmosphere, the notable element of this storyarc, so even while the latter is diminished somewhat here, at least the former is put into play.