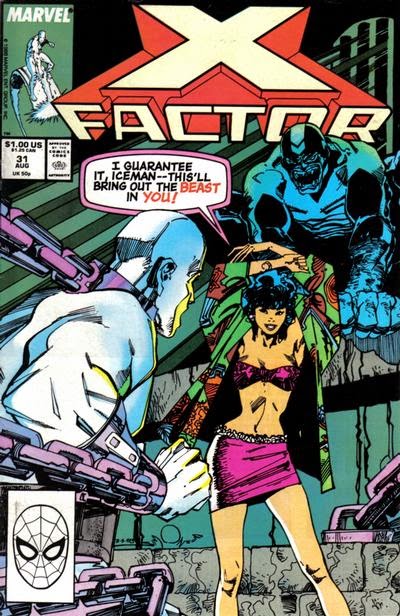 In a Nutshell
Infectia tries to kiss Iceman, but gets Beast instead.

Plot
Aboard Ship, Infectia leans in to kiss Iceman, but a time bomb from Boom-Boom interrupts them. As Iceman chases after her, Beast swings in and tells Boom-Boom and the rest of the kids about how he knows Infectia is a danger to Iceman, even though he can't remember exactly why. Meanwhile, in Dallas, Cyclops and Marvel Girl easily free themselves and begin fighting Freedom Force. Back on Ship, the kids spend the rest of the evening doing their best to interrupt Iceman and Infectia at every turn, and even Ship gets in on the action. But when Infectia threatens to use her power to enslave him, Ship, remembering his time as Apocalypse's prisoner, relents. In Omaha, Nanny calls forth Orphan Maker and sends him into a home to slay the parents inside. The next morning, Infectia decides to take Iceman to her apartment, and Ship provides a plane to fly them back to the city. 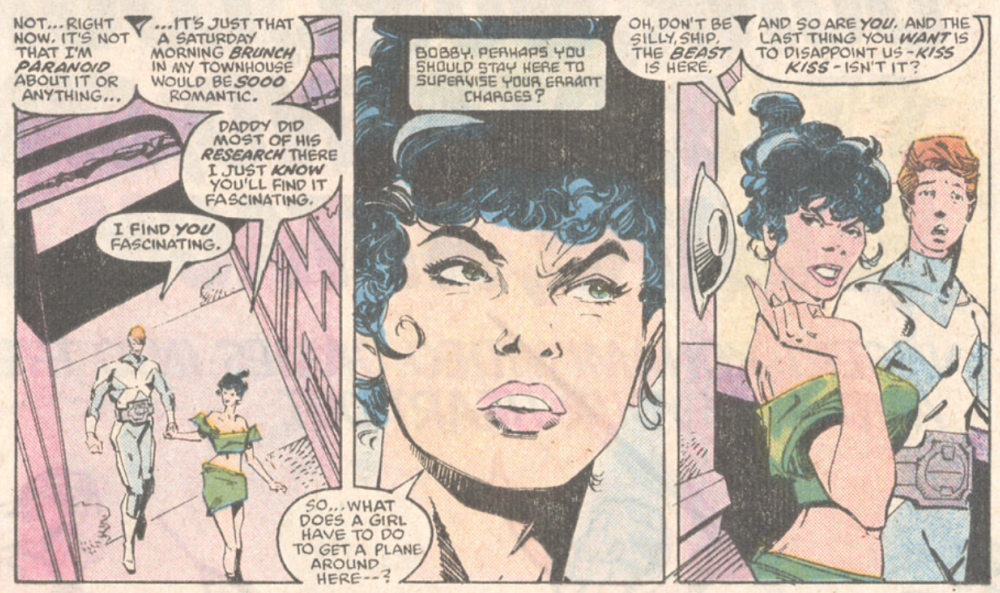 In Dallas, Destiny calls a halt to the fight, telling Cyclops his son is alive, but that she doesn't know where he is. In Chicago, a group of cloaked figures watch footage of Death's recent attacks, agreeing to monitor the situation while continuing their plans to destroy mutants. Back in New York, Ship sends Beast after Iceman and Infectia. When the pair arrive at Infectia's apartment, she restrains Iceman. Transforming a captured postman into a monster as a demonstration, she tells Iceman she's going to do the same to him so he can capture Ship for her. Just then, Beast arrives and battles the postman monster. During the fight, Infectia leans in to kiss Iceman, but Beast breaks free and manages to put himself between them, taking the kiss meant for Iceman. The ensuing explosion frees Iceman and causes Beast to shift between his human and animal forms. Iceman apologizes for not listening to Beast's warning as the shifting Beast slips into unconscious.

Firsts and Other Notables
After being kissed by Infectia, Beast falls unconscious and shifts between his normal look and his blue-and-furry look. Ultimately, Infectia's kiss will result in him permanently regaining his animalistic look, as well as his normal intelligence, marking this issue as the end of the "Beast is getting dumber" subplot. 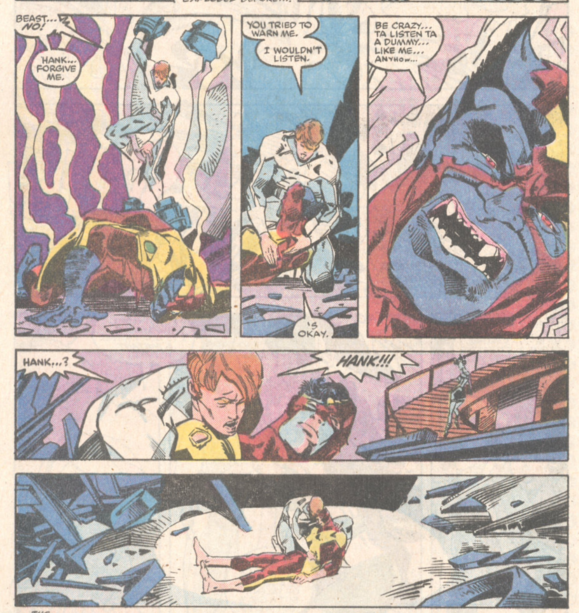 Nanny's accomplice, Orphan Maker (who will turn out to be not nearly as cool as his name suggests) makes his first appearance in this issue, though he is not yet named. 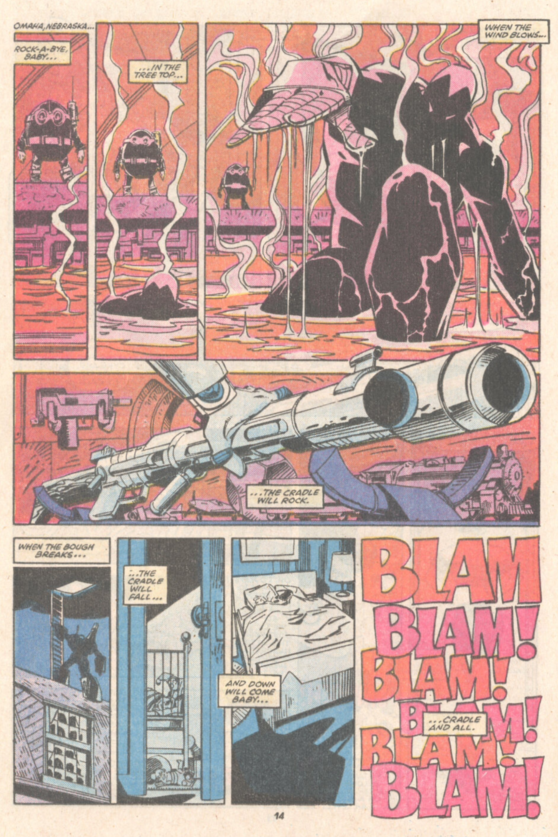 Death's hunt for Candy Southern has been noticed by a shadowy cabal - they will eventually be revealed to be the remnants of the Right. It's established they have Candy Southern, and that while she was scheduled to be killed, her termination order has been suspended for the time being. After Infectia transforms a postman into a monster, he recites the postman's creed. This issue is actually the first place I ever read it. 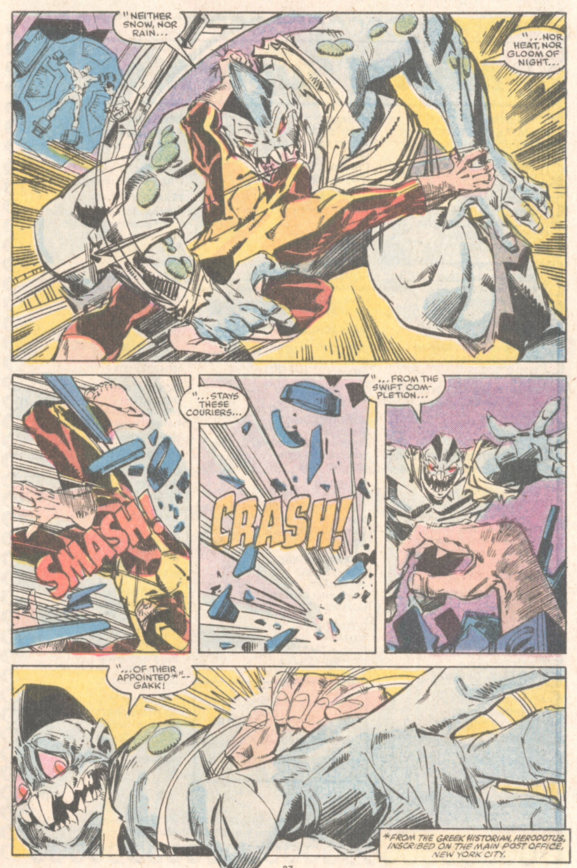 A Work in Progress
Destiny notes that, like Madelyne, time twists around Jean. She also confirms that Scott and Maddie's son is alive, though she is unable to pinpoint his location. Much of what she vaguely describes of his location will turn out to be true. 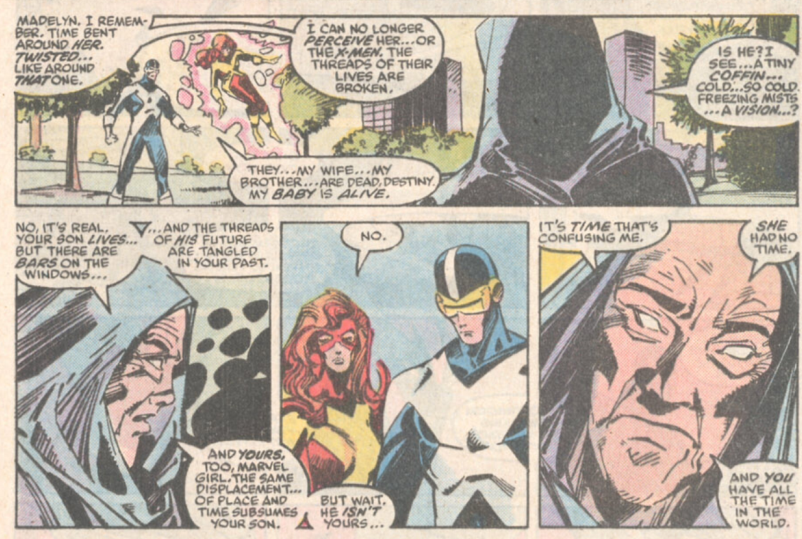 I Love the 80s
I dunno, am I reading too much into it, or is Ship's production of that plane a sexual innuendo?

The Awesome and Terrible Power of Cyclops
In a detail I've always gotten a kick out of, Cyclops is able to blast a small hole through Blob's arm. 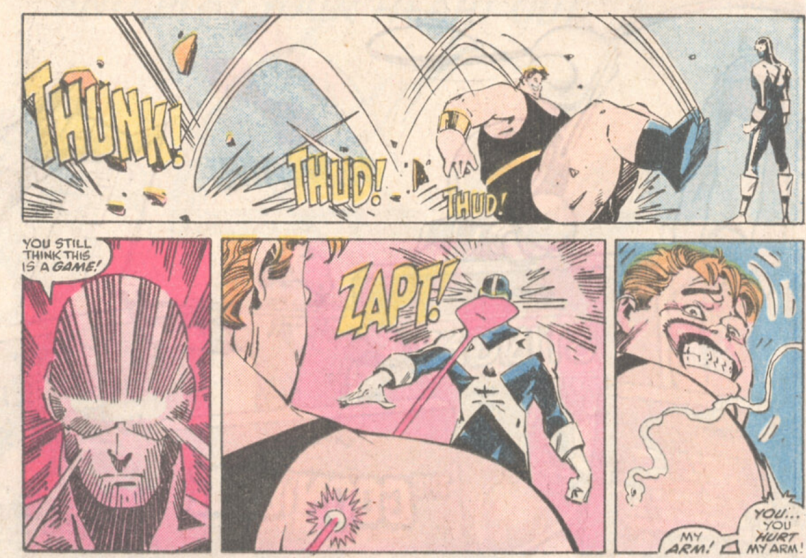 Teebore's Take
With that, the Infectia story mercifully comes to a close. Not because it was terrible, but because it was mostly forgettable, with everything happening on the periphery consistently more exciting or interesting that Infectia herself (and there's only so many times X-Factor can battle generic monsters, even ones drawn by Walt Simonson). This issue certainly continues that trend, with Death's hunt for Candy Southern and Cyclops and Marvel Girl's battle with Freedom Force (I enjoy that the pair more or less defeat Freedom all by themselves - a subtle indication of just how long they've been doing this stuff and how good they've gotten at it) proving far more entertaining than anything with Infectia.

As for the "A" plot, I actually don't mind the first half, with the kids doing their best Parent Trap imitation to keep Infectia from kissing Iceman, which is genuinely entertaining and shows that Simonson can write teenagers better than the petulant brats of New Mutants if she wants to, but once Infectia and Iceman leave Ship (for dubious reasons), it falls back into routine, forgettable territory. In the end, this three-parter essentially serves as a vehicle for resolving Beast's "getting dumber" status quo, and that's all well and good (and ultimately for the best), but Infectia herself unfortunately never manages to rise above the level of "plot device", which never a good thing for the character at the center of three part story.

Next Issue
Next week, more Brood in Uncanny X-Men #233 and more Spyder & Gosamyr in New Mutants #67, while the Avengers sort of show up in X-Factor #32.
Newer Post Older Post Home
Posted by Austin Gorton at 12:00 PM