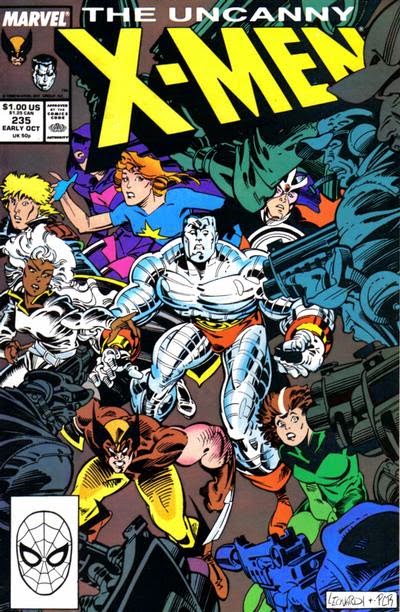 In a Nutshell
The X-Men come in contact with the Genoshans, and Wolverine & Rogue are kidnapped.

Plot
On the island nation of Genosha, a runaway mutant manages to stash his baby aboard a plan bound for Sydney, drawing off the pursuing magistrates so that the plane takes off without incident, just as the mutant is killed. A few days later, the Press Gang, a group of mutants employed by the Genoshan government, arrive in Sydney, sent to retrieve both the baby and Jenny Ransome, a mutant and nurse who has fled the country. Working with the Service Auxiliary, Jenny and her pilot, Madelyne Pryor, are attacked by the Press Gang. When the Hawkshaw is unable to get a read on Madelyne, both she and Ransome are sent back to Genosha via Pipeline, who is able to digitize and electronically transmit individuals. Later, the X-Men arrive in Sydney, looking for the missing Madelyne. Wolverine and Rogue track the Press Gang to a nearby hospital, where they discover the Press Gang kidnapping the mutant baby. Pipeline teleports in a group of Magistrates who proceed to battle the X-Men. Though the X-Men defeat the Magistrates, the Press Gang is able to escape back to Genosha thanks to Pipeline, with the baby, as well as Wolverine and Rogue.

Firsts and Other Notables
Genosha, an island nation off the coast of Africa whose economy, we'll soon learn, is built on the back of mutant slaves, appears for the first time this issue. Genosha is another of Claremont's significant contributions to the X-mythos, as the setting and the characters within will become a major player across the X-books, and will be the setting for one of the franchise's annual crossovers in the future.

This issue also marks the first appearance of the Press Gang, a group of mutants tasked with apprehending fugitive Genoshans: Hawkshaw, who can sense mutants, the super strong Punchout, and Pipeline, who can essentially teleport people by breaking them down into a digital signal, transmitting them via a modem, and reconstituting them on the other side. 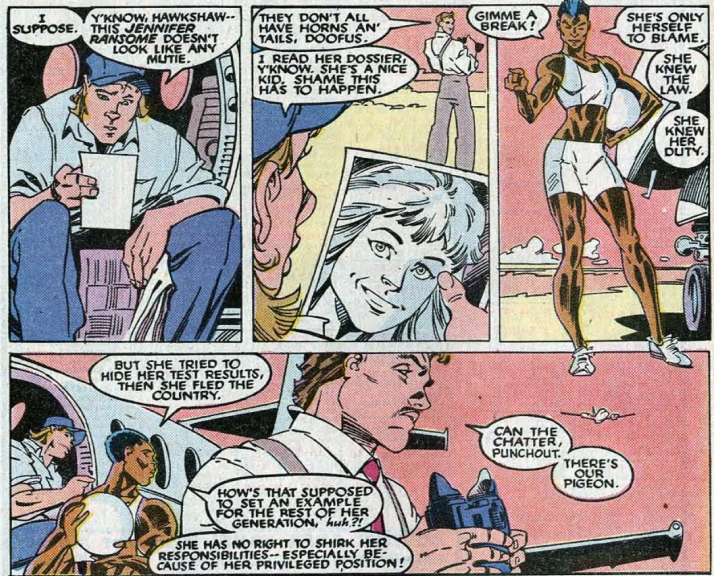 The Genegineer, the man responsible for maintaining Genosha's dominance over mutants, is mentioned for the first time; he'll make his first actual appearance next issue.

We get our first look at Genoshan Magistrates this issue, the paramilitary police force responsible for maintaining order in Genosha and protecting its interests abroad. 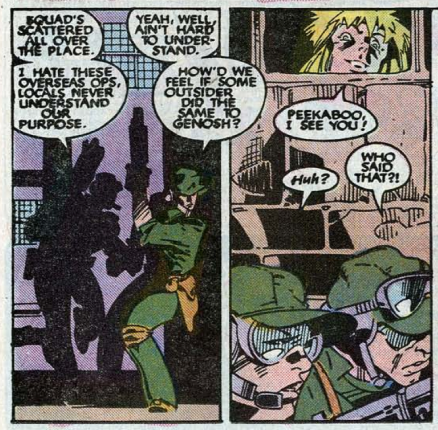 Rick Leonardi is back on pencils, and he and Silvestri will alternate artistic duties throughout this arc (presumably to enable Silvestri to pencil all of "Inferno" without interruption).

A Work in Progress
It's revealed that Madelyne has signed up for the Service Auxiliary, filling in as a pilot when needed.

Even Hawkshaw's enhanced senses are unable to get a read on Maddy. 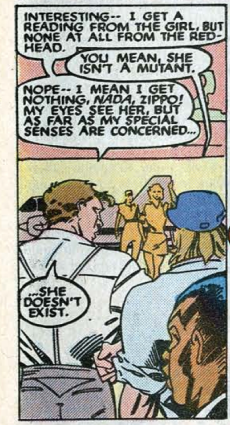 It's established that the Genoshan government does not recognize any other citizenship; if you're born in Genosha, you're considered Genoshan for life.

Havok finds himself surprisingly defensive about Madelyne when Dazzler teases her for knowing the computer system so well.

Later, Psylocke realizes that Havok is angry enough to kill at the idea of Madelyne being harmed.

It's revealed that no patients at the hospital died during the X-Men's fight with the Marauders in issues #221 and #222. 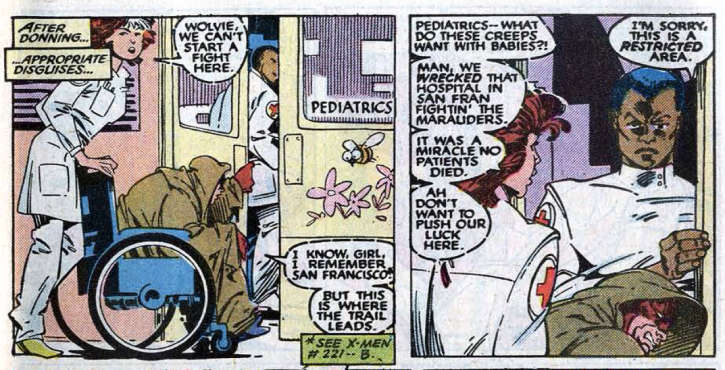 The X-Men leave their calling card behind in Sydney. 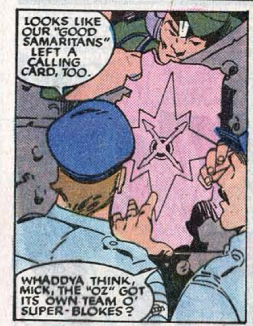 I Love the 80s
Pipeline's power, while pretty cool, does make me wonder what he did with it before modems and the internet came about. 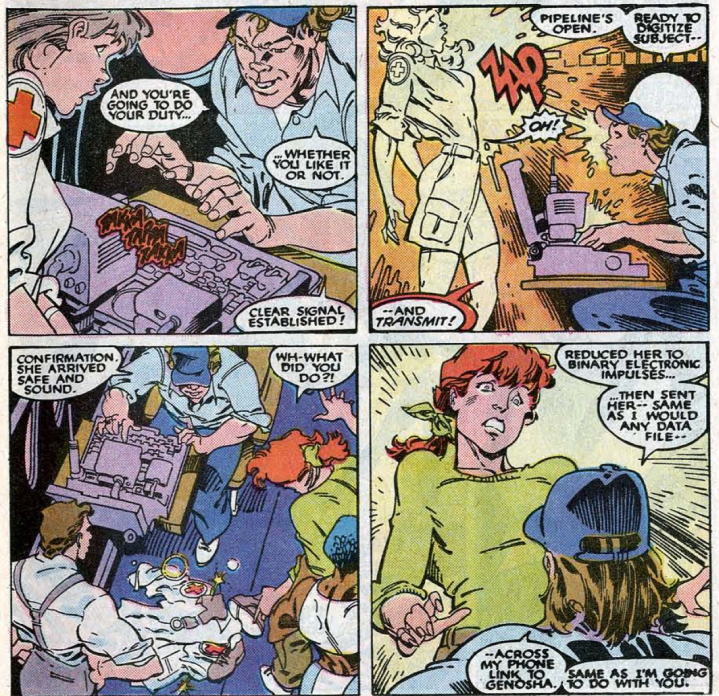 Mad Max is named dropped, and one of the Australian cops is named Mick Dundee, a reference to Crocodile Dundee.

Claremontisms
This issue introduces two new terms into the book's lexicon: genejoke and Genegineer. The first is a harsher, more gutteral alternative to the 60s-era "mutie" as a derogatory slur for mutants, while the second is fantastic portmanteau on Claremont's part for the title of the person responsible for creating Genosha's mutant slave population.

Artistic Achievements
In a neat trick, several times in this issue we see Gateway's teleportation effect from the perspective of the location to which the X-Men are being teleported, the effect being a big circle which opens up out of nowhere and contains a glimpse of the Outback. 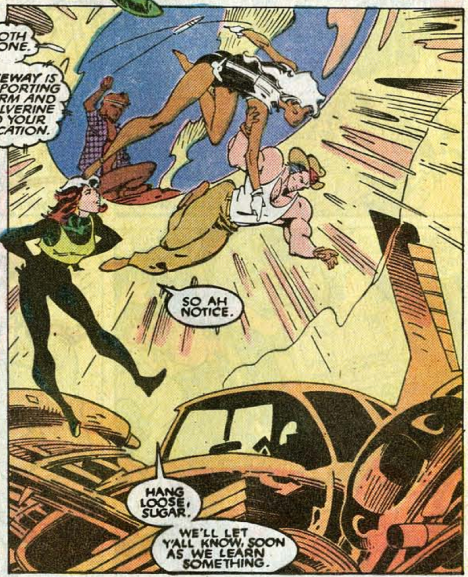 For Sale
There's an ad for, amongst others, the original Teenage Mutant Ninja Turtles Nintendo game, in which Donatello was the most powerful turtle and it was ridiculously difficult just to get past level three (I don't think I ever made it past level four). 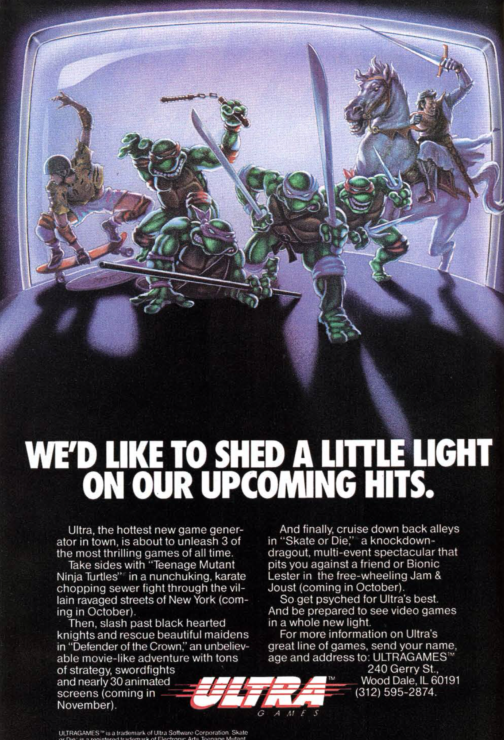 It's in the Mail
The letters page continues to tease an Ann Nocenti/Rick Leonardi Colossus graphic novel, which is, I believe, what ends up being the Colossus story in Marvel Comics Presents.

Teebore's Take
This issue kicks off the title's final story before "Inferno", a four-parter which introduces the island nation of Genosha to the world of the X-Men. We'll discuss the significance of Genosha in future issues, (it's arguably Claremont's most thematically-significant contribution to the series since "God Loves, Man Kills"), when the gist of their setup is revealed. For now, this is simply an effective introduction to the arc, hinting at the greater evil that resides in Genosha, as well as giving each member of the X-Men a chance to showcase their personality and power as they track down the kidnapped Madelyne Pryor and come into contact with the Genoshans who took her. Taking place entirely in Sydney, it's also one of the rare glimpses we get at the idea of the Outback X-Men as Australia's local heroes.

Rick Leonardi is back on art, and while his more cartoony style might seem at odds with the darker material, the juxtaposition between his more exaggerated work and that material actually works quite well, lending the whole thing an air of creepy paranoia, and his knack for body language gives us a sense of some of these new characters even before the writing does. As we'll see over the course of the next three issues, "A Green and Pleasant Land" is a highlight not only of the Outback Era, but of Claremont's entire tenure on the book; with its introduction of Genosha, teases of its true nature, and showcase for the X-Men as as a whole, this issue helps that story to hit the ground running.

Next Issue
Tomorrow, the New Mutants play dress-up in New Mutants #68, and Friday, Beast returns in X-Factor #33. Next week, Wolverine and Rogue find Genosha to be less than pleasant in Uncanny X-Men #237.
Newer Post Older Post Home
Posted by Austin Gorton at 12:00 PM