Around the Web
My first Market Maven column for Capeless Crusader went up this week, a new weekly column I'll be writing that looks at each week's batch of comic releases. Look for it every Monday, and eventually I'll  have some other columns up on Capeless Crusader as well. And if you like what you read, be sure to like the site's Facebook page as well.

As for Sound on Sight, this week I reviewed the first issue of my boy Cyclops' first solo series, a fun little space pirate-y story starring the time-lost version of the character (not the present day cranky Magneto-esque version).

And hey, just because it's been awhile since I'm mentioned it, don't forget about Saved by the Bell Reviewed, the podcast co-hosted by me and Dr. Bitz. New episodes come out every week, and this week's is a doozy!

TV Renewals and Cancellations
The network up fronts are next week, which means this week has been a slaughterhouse for most of the networks' bubble shows. SHIELD will be back next season, not surprisingly, joined by the long-discussed Agent Carter series. The CW picked up Flash, and Gotham, the pre-Batman Batman show on Fox, also received a series order, and interviews with the creator led to some amusing Twitter comments as he tried to explain how his show about Batman's city, villains and supporting characters would be okay not featuring Batman because every other show also doesn't feature Batman.

Revolution was cancelled; I'm still behind on it but I've been enjoying this season more than last. Still, this was hardly a surprise. Ditto Community, which after four on-the-bubble renewals finally ran out of luck. I'll certainly miss it, but I'm finding it hard to be too upset about this news. We certainly got much more of that show than we probably had any right to expect (thanks to the laughable state of NBC), and it went out on a relatively high note.

I'm much more bummed by the cancellation of Trophy Wife and Suburgatory. The former was my favorite new comedy of the year, featuring a tremendous cast and unique characters with tons of potential, while the latter, which was often more of a 22 minute drama than a sitcom and certainly had it's ups and down, was anchored by a fantastic, nuanced lead performance from Jane Levy. Both will be missed.

Once Upon a Time: A Curious Thing

So the reveal that the Charmings cast the curse to bring everyone back to Storybrooke was a legitimately interesting development. Though kind of a dick move, considering they uprooted everyone else just for the sake of their baby. I suppose that's monarchy for you.

I also really like Enchanted Forest Regina as an ally of the Charmings, just because she rolls her eyes at their cutesy crap at the same time I do.

Revealing the truth behind the curse seemed like it was happening really soon, until I realized there's only two episodes/three hours left in the season. I wouldn't exactly say this half season has been briskly paced, but it certainly moved better than the Neverland arc, and I was a little caught off guard that we're already so close to the endgame.

Though the eventual resolution was a bit pat, having Snow crush Charming's heart to power the spell was a great "how the hell are they going to get out of this one, moment?" I almost half expected Charming to die once the curse broke or something, and then we'd have to spend the rest of the season trying to bring him back.

So Regina couldn't go through the door to see Glinda because she's not pure of heart...except much has been made (including this season) of how Snow's heart is no longer pure since she murdered Cora.

Similarly, I'm not quite sure why Hook is being all cagey about who sent him the message to bring Emma back to Storybrooke, considering it was just Neal.

So I guess not much happened during the "lost" year in the Enchanted Forest after all. They came back, Zelena threatened Snow's child, eight months later they did something about it, and here we are.

Agents of SHIELD: Nothing Personal
One plot point aside, this was another strong episode, filled with some more great tension, a nice guest turn from Maria Cance, and, for the most part, another good use of Skye (I appreciated that she did her best to rescue herself from the diner, even if, in the end, Coulson had to step in to save her).

As for that plot point? The infuriating "Skye won't let Deathlok kill Ward" business. Look, I almost always come down on the side of "superheroes don't kill", even in the face of logical or "greater good" considerations. But Skye's not a superhero, she's a SHIELD agent, and presumably, accepted that she may have to take a life in the course of that duty, just as police officers, FBI and CIA agents to do. And that's before you even consider the fact that Ward is Hydra and that Skye knows for a fact he's killed at least one person in the last twenty-four hours. I'd argue she should have let Ward die even if he was wasn't a traitor; that he is should have made her decision all that much easier.

In less irritating character moments, I really liked Fitz's freakout over Ward being Hydra, and appreciated the effort made in explaining Maria Hill's decision to work for Stark, as seen at the end of Winter Solider (that it essentially helps protect her from prosecution for the whole Hydra fiasco is a neat little detail).

So it turns out Coulson was in on Project TAHITI before he died, and the memory wipe he received of his resurrection came about because of his own recommendation as a result of working on that project. But that still doesn't tell us who ordered Fury to bring him back, or why.

Maria Hill seemed to suggest that Stark might be starting a privatized version of SHIELD - perhaps a hint at the formal creation of the Avengers (operating out of his mansion or tower), or way to resurrect SHIELD as a formal entity for this show and future MCU movies?

Blegh. Rachel quitting NYADA is just dumb. Not only within the context of the show (especially after we spent so much time on how important it was to her to get in), but because it brings out the worst traits in the character. If I had any hope this would lead to a colossal falling-on-her-face moment, where Funny Girl flops and Rachel can't get another gig and now she's out of school, it'd be okay. But this is Glee, and realism is never its chief concern, and this is Rachel, and the show won't ever let anything too bad happen to her for too long.

I find it really hard to care about the Sam/Mercedes relationship. I just don't think I like Mercedes much. 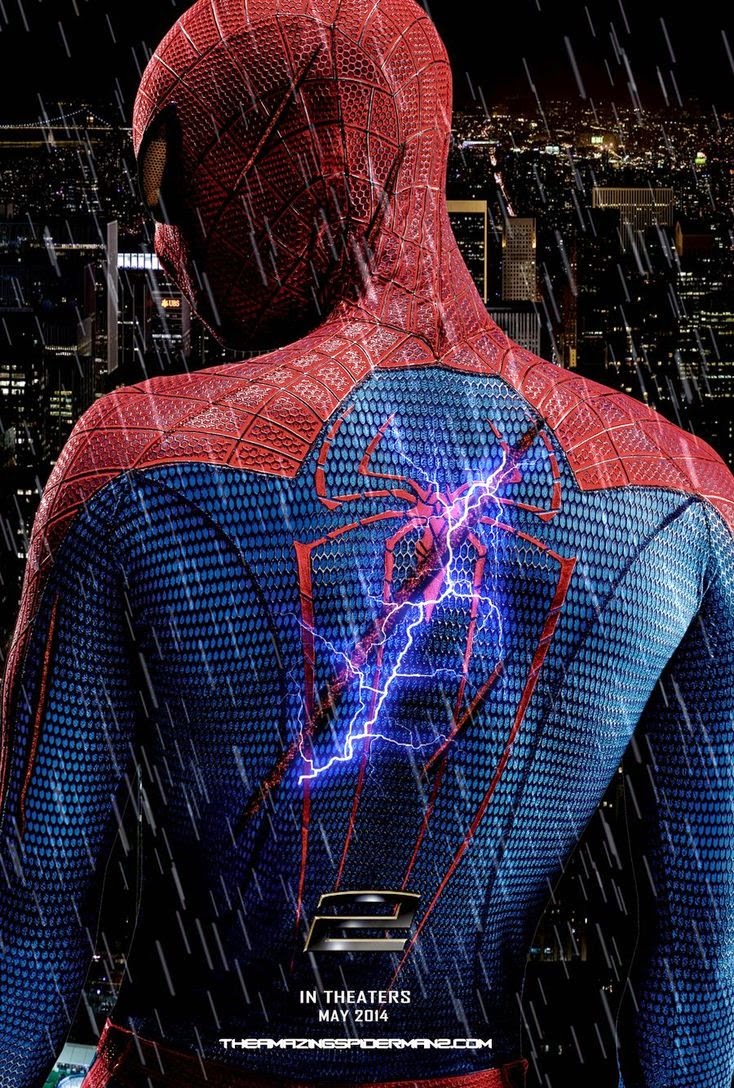 About what I expected from a sequel to a film I had some significant problems with, stuffed with too many characters. Which is to say, there were parts of this that were quite good, and other parts that were dreadful, and that there's the seeds of at least one or two good movies crammed into this thing.

The action scenes continue to be great, and I continue to enjoy Andrew Garfield as Spider-Man (he's much quippier than Maguire was, which is nice, even if his Parker still isn't enough of a nerd). Electro was kind of fun (and their confrontation in Times Square was a nice action set piece). Emma Stone is, of course, adorable, and I appreciated the effort made in giving her character some agency and specifically addressing the issue of her not being a damsel in distress. The score was once again pretty good. And hey, I was legitimately surprised by Gwen's death, even though the character's death has been a cornerstone of comic book history for as long as I've been reading comics (I figured the filmmakers wouldn't ever want to let Emma Stone go).

But man, this is a loud, messy movie. Harry's presence would have worked better if he'd been at least mentioned in the previous film (and I'm still not sure why his condition was degrading so fast when his dad at least lived to be as old as Chris Cooper, especially since Harry specifically received info on how to prolong his life). I have no idea what all the nonsense about Peter's dad added to the film (other than continuing the first film's obsession with Peter's past parents), and he certainly didn't warrant his own action sequence at the beginning. On the one hand, I'm glad the series didn't forget that Peter promised Gwen's dad he'd stay away from her (his cavalier dismissal of it at the end of the previous film being one of my bigger beefs); on the other hand, I got really tired of the "I love you/I have to stay away from you/But I love you" merry-go-round about twenty minutes into the movie.

As Dr. Bitz said, everything in this movie is turned up to eleven: it's not enough that Peter's dad had a secret lab, it has to be a secret lab in a secret tunnel that rises up from the ground. It's not enough for Peter to meet up with Gwen, he has to stare longingly at her from a distance before walking into moving traffic and causing car crashes (because this Peter Parker continues to be a dick). It's not enough for Max Dillon to be a meek Spidey fanboy, he has to be meek and fanboyish to a psychotic level. It's not enough for Peter and Gwen to battle Electro to save the city, they have to do it before those two planes they don't even know about crash overhead! When you're just yelling everything, it all becomes noise...

It was awfully convenient of Rhino at the end to let Spider-Man and that kid have a conversation before he attacked Spider-Man, wasn't it? Seriously though, logic aside, that was one of the better scenes in the movie. The Man of Steel producers could take a lesson or two from this movie about superheroes as aspirational figures.

Did anyone catch the name of the guy to whom Harry was talking about the Sinister Six at the end? He's the same guy from the first film's post-credits sequence, and it sounded like Harry said his name, but I missed it.

Speaking of post-credits sequences, I know they're just big ol' commercials for the next film, but literally just inserting a clip of another movie from another franchise is being a bit too obvious about it.

Quotable Quotes
Agents of SHIELD
Coulson: If I come out, will you shoot me? 'Cause then I won't come out.

Skye: That - that is the twisted logic that they teach you when you sign up to be a Nazi.
Ward: Stop. Wait. I'm not a Nazi.
Skye: Yes, you are. That is exactly what you are. It's in the S.H.I.E.L.D. handbook, chapter one. The Red Skull, founder of HYDRA, was a big, fat, freaking Nazi.

Modern Family
Manny: You mean all the cool kids, with their leather jackets and their pickles?

Alex: I can’t believe they kept it.
Haley: I have a name!
Newer Post Older Post Home
Posted by Austin Gorton at 12:00 PM