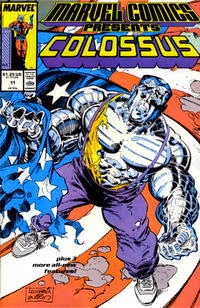 In a Nutshell
While on vacation, Colossus helps save a family from the Cold Warriors.

Plot
Issue #10: Colossus visits an amusement park and gets into an argument with a news vendor. After accidentally transforming into his steel form, he runs off into the woods. There, he overhears a family having a picnic, and ponders the meaning of freedom. Zachary, the young boy with the picnicking family, plays in the woods until he stumbles across a group of men about to kill a captive. Issue #11: The group of men, called the Cold Warriors, kill their captive, and receive orders from their leader to kill Zachary as well. Nearby, Bruce, Zachary's father, spots Colossus and suspects him of spying on his family. The two men tussle until they hear Zachary scream. Rushing to the sound, Colossus attacks the Cold Warriors. Issue #12: Colossus fights off the Cold Warriors and helps the family escape. Bruce insists on going to the police, even though Colossus believes the Cold Warriors' cybernetic enhancements suggest a connection to a higher power within the government. When the police behave strangely, Colossus once again helps the family escape, and Bruce takes him to his house, where he begins boarding up the windows and handing out guns. When he gives a gun to Zachary, the boy points it at Colossus and asks if he's a Commie. 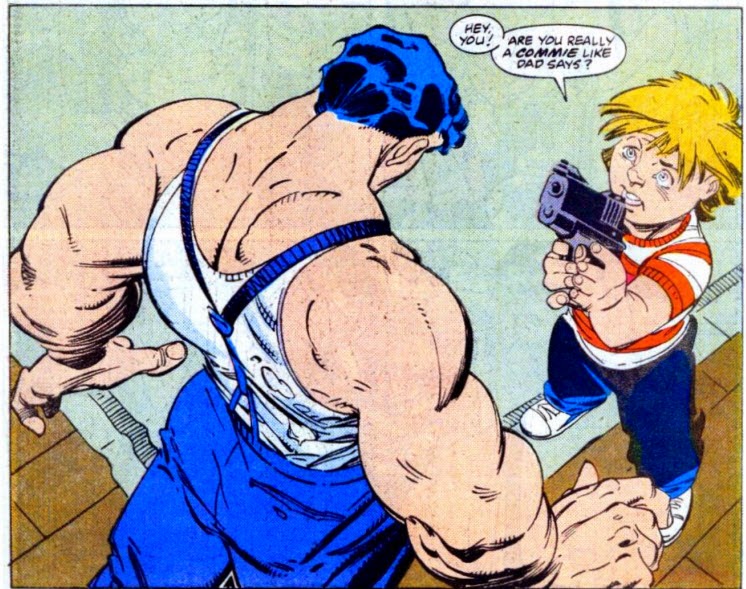 Issue #13: As the neighbors gather outside Bruce's boarded up home, he and Colossus debate the relative merits of their countries until the Cold Warriors attack. As Bruce fires at them from his house, Colossus rushes outside. Fighting a woman with bionic arms, she begs him to take her inside so she can talk to the family. Issue #14: The bionic woman says her name is Number Six and explains that the Cold Warriors are an anti-terrorist cell created and long since forgotten by the CIA, and that they have orders to kill Bruce and his family for getting involved in their operation. She says Colossus can end the threat by capturing the group's leader, and draws him a map to his location. Issue #15: Colossus takes out the Cold Warriors en route to their leader, while Bruce fights them off at his house, though he suspects Number Six of being a traitor. 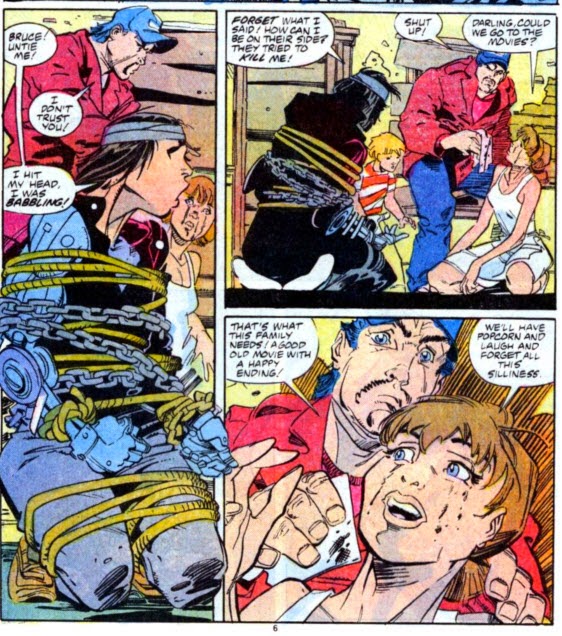 Issue #16: Colossus confronts the Cold Warriors' leader, Alexander, who agrees to go quietly, confidant his superiors will free him and keep the entire situation out of the press. Back at the house, Number Six argues that Bruce needs her help, just as the Cold Warriors attack again. Issue #17: The police arrive and order the Cold Warriors to stand down. Colossus returns with Alexander, and as Bruce and his family tell their story to the media, Colossus worries that the story will be covered up. Before Number Six is taken away by the police, Colossus assures her things will turn out okay, since she did the right thing. Bruce thanks Colossus for saving his family as Alexander is put into a police car, telling Colossus he can kill the story with one phone call. As he drives off, Bruce asks Colossus who Alexander was; Colossus responds that he is just a confused and crazy man. Or, at least, Colossus hopes he is.

Firsts and Other Notables
Colossus appears in this story on vacation from the X-Men, as he grapples with feelings of homesickness and the relative merits of both his homeland and his adopted homeland. Though the story takes place between Uncanny X-Men #238 and #239, he is able to transform from flesh-and-blood to steel with relative ease (or, at least, without comment), which hasn't really been the case in recent issues of X-Men.

This story is the first, and I believe only, appearance of the Cold Warriors, a group of super-powered and/or cybernetically-enhanced CIA agents who have broken from the agency and become a fringe group, operating in the shadows and determined to enforce their vision of American ethics on the country. With the exception of Alexander, their leader, an old man with OCD, and Number Six, who defects to help Colossus, all are rather broadly drawn in terms of characterization, though there's some implication that at least a few are working against their will.

Art comes from Rick Leonardi, and it's probably the best thing about this story.

The first part of this story runs in the same issue as the final chapter in Wolverine's initial Marvel Comics Presents serial, and as such, Colossus doesn't get the cover to himself until issue #11.

I Love the 80s
Given that much of this story consists of a philosophical debate between Colossus and Bruce over the relative merits of America and the Soviet Union, it is very much of its time. 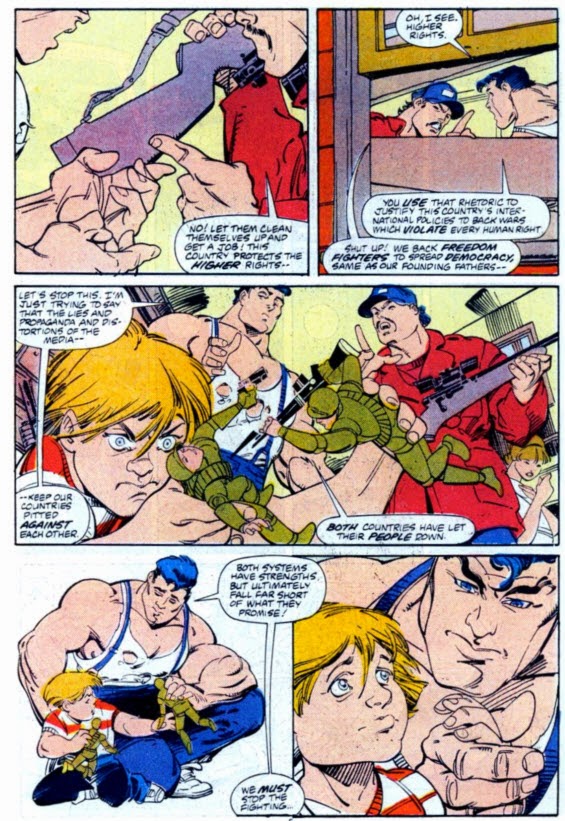 Zachary's Grampa asks Colossus his thoughts on the recent warming trend in issue #11, something which was certainly a concern in the 80s and, sadly, remains so now. 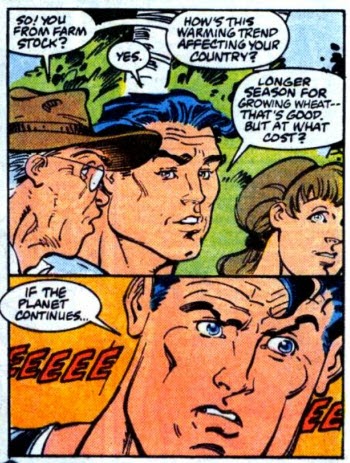 Teebore's Take
In principal, this isn't a bad story. Nocenti is basically using it as a vehicle for some socio-political commentary, arguing that for all their differences, the USA and the USSR are quite similar, in that both have shared values, expressed in different ways, and that both are capable of failing their citizens and/or coming up short in terms of implicit idealistic promises. And even though that conflict in very dated (what with the USSR being on one side of it), the basic premise and the point Nocenti is trying to make remains, unfortunately, as valid as ever: America is not a flawless nation, and is capable of letting down her citizens, and her enemies are not faceless monsters, and are just as capable of helping and failing their citizens as America.

The problem is in the execution, as Nocenti turns all the characters into her mouthpieces, spouting one side of an argument or another via dialogue that no person (or, at least, no people from these characters' assumed backgrounds/situation) would actually speak (Number Six refers to the Cold Warriors as "a tumorous growth caused by secrecy"). Which isn't as big a deal for the brand new characters introduced in this story (most of whom are meant to be symbols more than actual characters, ie Grampa as the "Good Old Days" that can't survive in the modern world) as it is for Colossus, who expresses a more advanced understanding of the then-current American/Soviet Union political situation than we've ever seen from him before. Furthermore, even when not spouting surprisingly astute-political commentary, Colossus doesn't really sound like himself, either in dialogue or internal monologue, for large chunks of these issues (he says things like "I guess" and "witnesses to something very high level"). The end result isn't an awful story, even if it's not terribly subtle, but it's not much of a Colossus story, either.

Next Issue
Tomorrow, Excalibur battles the Juggernaut in Excalibur #3, followed by Wolverine fighting Silver Samurai in Wolverine #2 on Friday. Next week, light up a match in Uncanny X-Men #239.
Newer Post Older Post Home
Posted by Austin Gorton at 12:00 PM