In a Nutshell
Beast wakes up, blue, furry and smart again.

Plot
In New York City, amidst a record heat wave, the Alliance of Evil protests the Mutant Registration Act, whose deadline is fast approaching. Nearby, Marvel Girl and Iceman are taking the kids shopping for new school clothes. When the Alliance spots them, they attack. Meanwhile, aboard Ship, Cyclops monitors Beast, who remains unconscious, shifting between human and furry forms, and growing stronger. Cyclops then catches footage of the battle on TV. In the city, the kids intervene to help Marvel Girl and Iceman, though Rusty, still a wanted fugitive, stays back for fear of being recognized. Meanwhile, in a Kansas City suburb, Nanny and the Orphan Maker capture two mutant children, killing their parents. Back in New York, Rusty fashions a crude mask and joins the fray, unwilling to let his friends get hurt when he could help them. 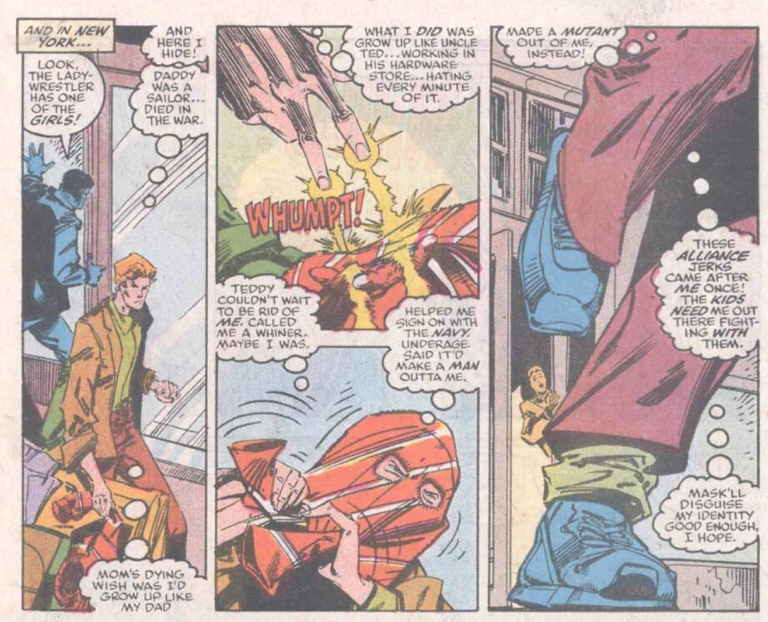 However, the Alliance quickly recognizes him, and once more tries to recruit Rusty to their cause. Hearing the offer over the broadcast, Beast suddenly wakes up, back in his furry form, the desire to help Rusty being strong enough to wake him from the nightmarish condition in which he was stuck. Ship teleports Beast and Cyclops into the city, where they help turn the tide against the Alliance. Just then, Freedom Force arrives to take custody of the Alliance and enforce registration. Beast agrees to register, while the rest of X-Factor register their public identities. Rusty, however, refuses, and announces that, in order to address the criminal allegations against him once and for all, he will voluntarily turn himself in to the naval authorities. Elsewhere, at the Right's secret headquarters, Cameron Hodge prepares for his impending confrontation with Death.

Firsts and Other Notables
Beast returns to normal this issue - normal being blue, furry and intelligent, though he also comes out of the whole Maddix/Pestilence/Infecta mess stronger than ever. 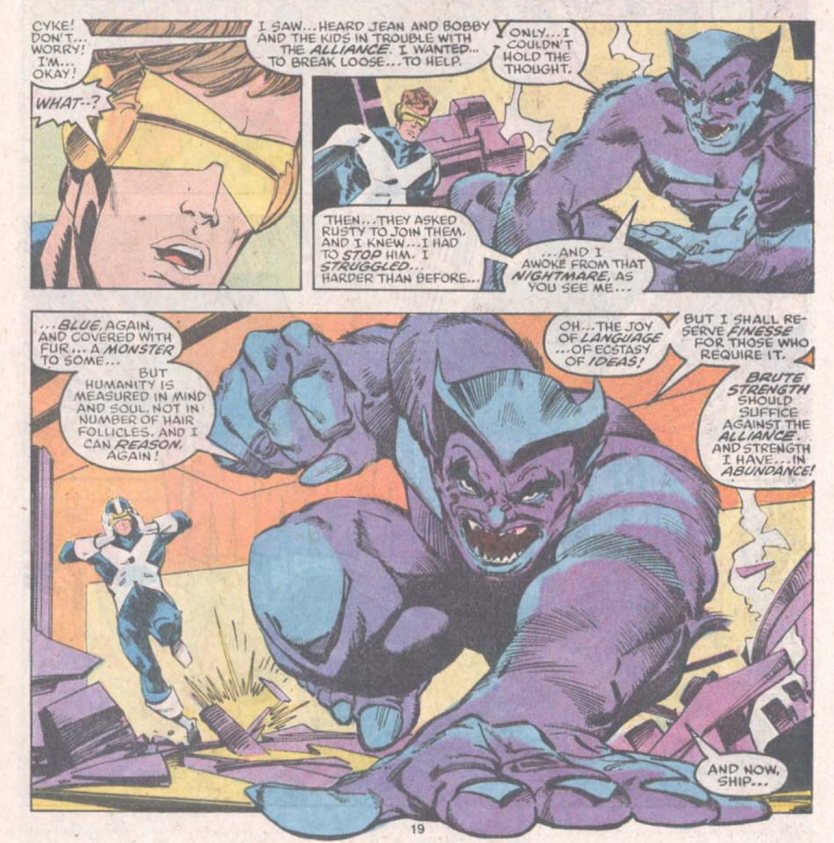 With surprisingly-minimal fuss (given how much his identity was kept a secret in previous issues), Cameron Hodge returns, revealing how he survived the explosion of his plane in New Mutants #60 as he prepares for a looming confrontation with Death (which occurs next issue). 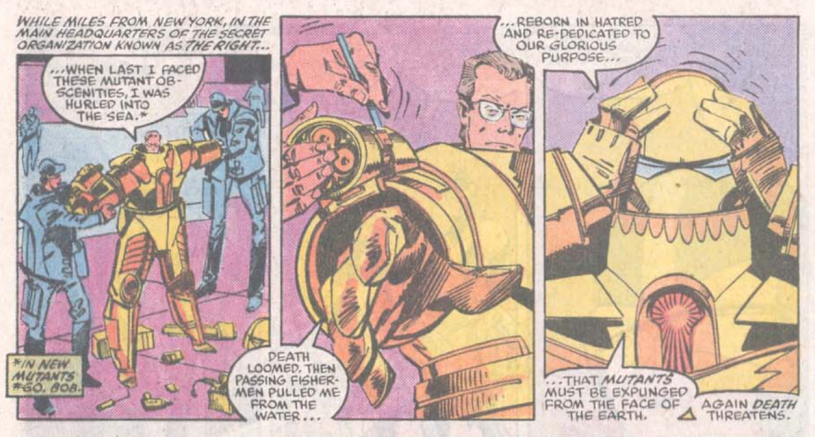 X-Factor's original bad guy group, The Alliance of Evil, returns this issue, having broken out of jail since being captured in issue #6. No longer led by Apocalypse, they are protesting the Mutant Registration Act, basically by smashing stuff. We'll see the Alliance once more, briefly, in a future New Mutants annual, but they will be absent Time Shadow, making this his final appearance. 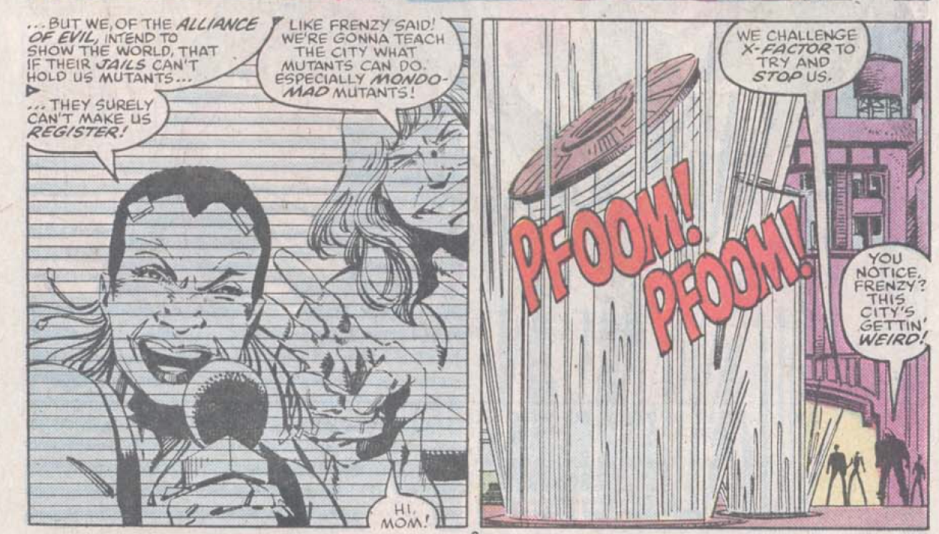 With the X-Men in Genosha and the New Mutants in space, it's up to X-Factor to start teasing "Inferno". To that end, Trish Tilby opens the issue reporting on the current heat wave gripping New York City, and throughout the issue, inanimate objects are noted to be acting of their own accord or otherwise strangely (manhole covers flying off of their own volition, clothing changing sizes, etc), all of which will become more pronounced and obvious as "Inferno" nears. 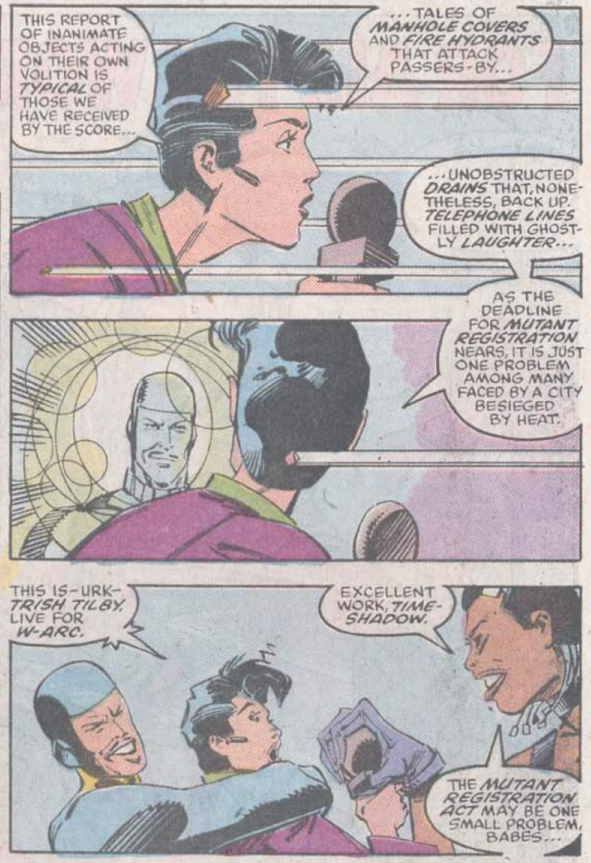 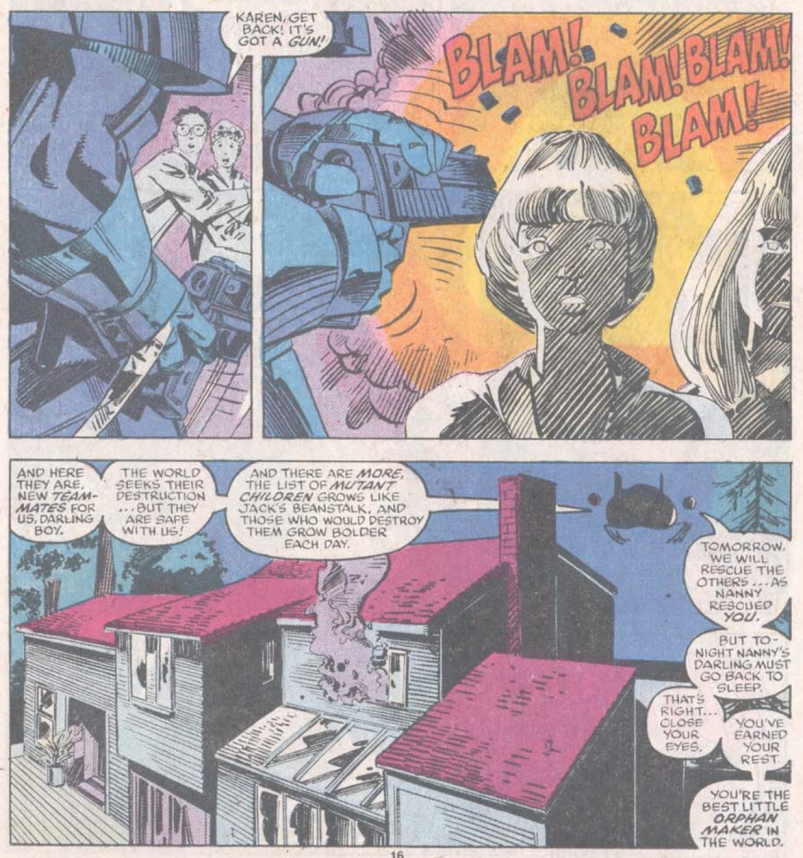 The Chronology Corner
Following this issue, X-Factor appears in X-Terminators #1. After that, Beast appears briefly in Incredible Hulk #350, in which he recruits the Hulk for an ad hoc team of Avengers (the regular team having recently disbanded due to Dr. Druid coming under the sway of Nebula and causing all kinds of trouble). After that, Beast and Hulk appear in Avengers Annual #17, the final chapter in "The Evolutionary War", in which Captain America (as the Captain) leads that ad hoc team against the High Evolutionary.

A Work in Progress
As the issue opens, the kids are shopping for school clothes due to their upcoming departure to boarding school. 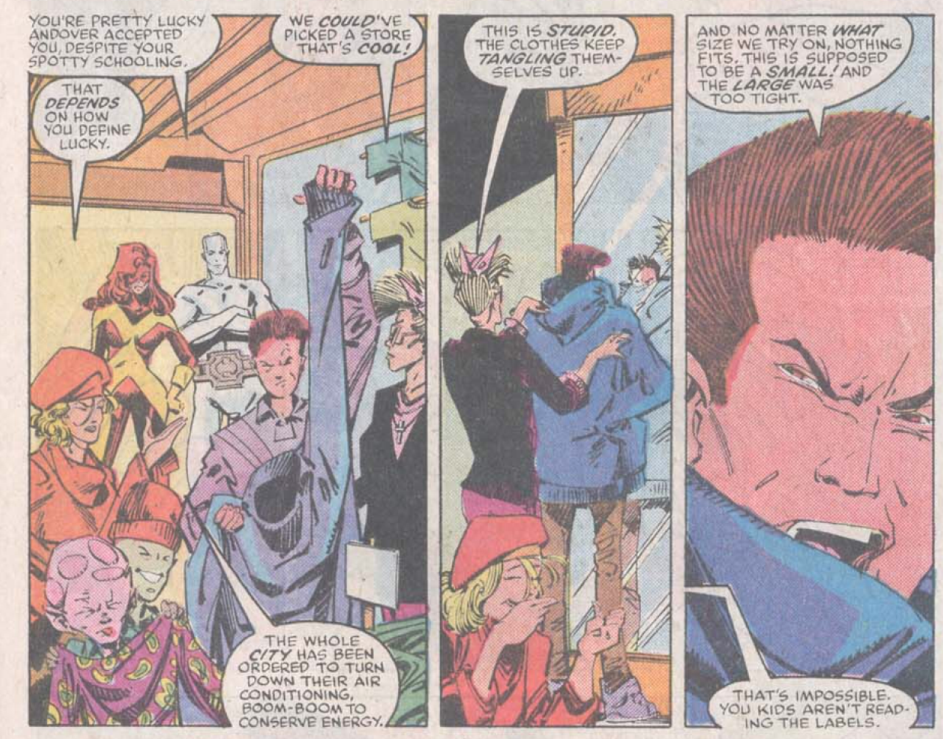 It's suggested that X-Factor had to create a fake identity for Rusty in order to get him into school (due to his status as a fugitive), but it ultimately becomes a moot point by the end of the issue.

Cyclops tries to make sense of Destiny's cryptic hints as to his son's whereabouts. 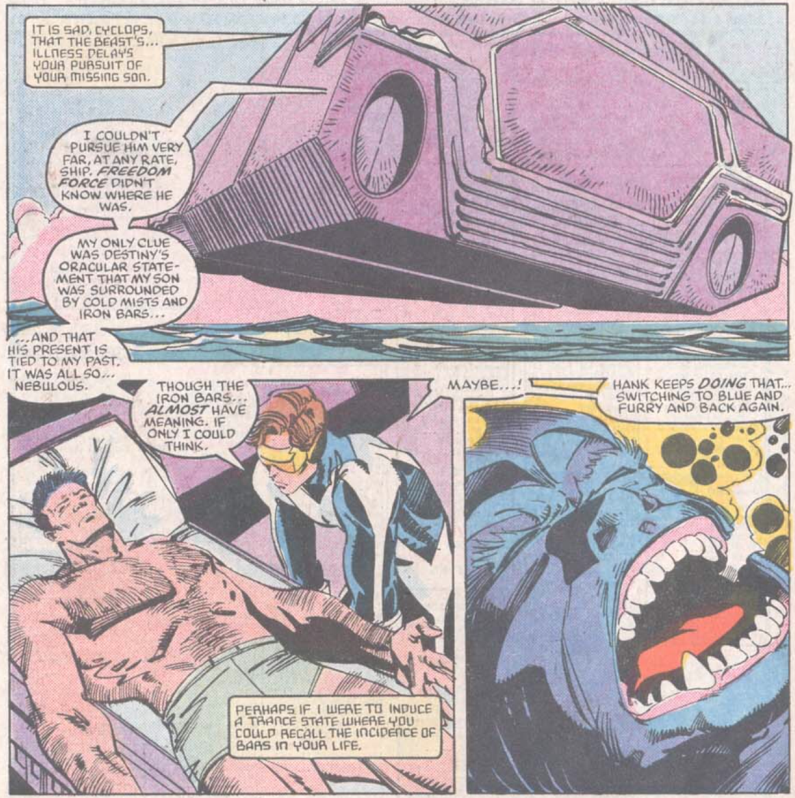 Ship sends Beast and Cyclops into the city to help against the Alliance via a teleportation beam (which, from "Fall of the Mutants", we know is well within its capabilities), which begs the question: why didn't he just teleport Cyclops and Marvel Girl to Dallas in issue #29 instead of sending them in an aircraft.

Trish Tilby, who has only interacted with Beast while he was human-looking, sees him in his furry form for the first time. 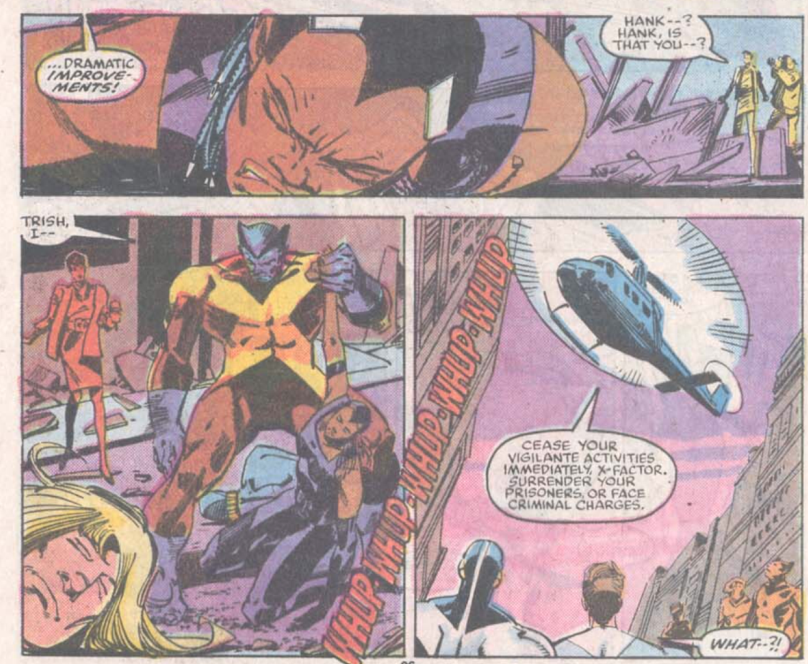 I don't know why, but I actually kinda like blue and furry beast in the brown-and-yellow X-Factor uniform. Generally, I prefer Beast in trunks since the blue fur is so visually striking anyway, and aesthetically speaking, brown-and-yellow on blue is pretty hideous, but there's still something about it I like. Maybe because he doesn't wear it for long? Or because it does that thing where it's so bad it circles back around to being kinda good?

I Love the 80s
When the Orphan Maker enters a child's room, the girl thinks he's a Transformer. Human/Mutant Relations
This issue takes place on the deadline for mutants to register with the government per the Mutant Registration Act. It's said that the kids don't have to worry about it, as it only applies to adult mutants. Rusty is old enough, but he refuses to register on principle, and instead hands himself over to the authorities (he's still wanted for the events of issue #1), which is where X-Terminators #1 (on sale the the same time as this issue) picks up. 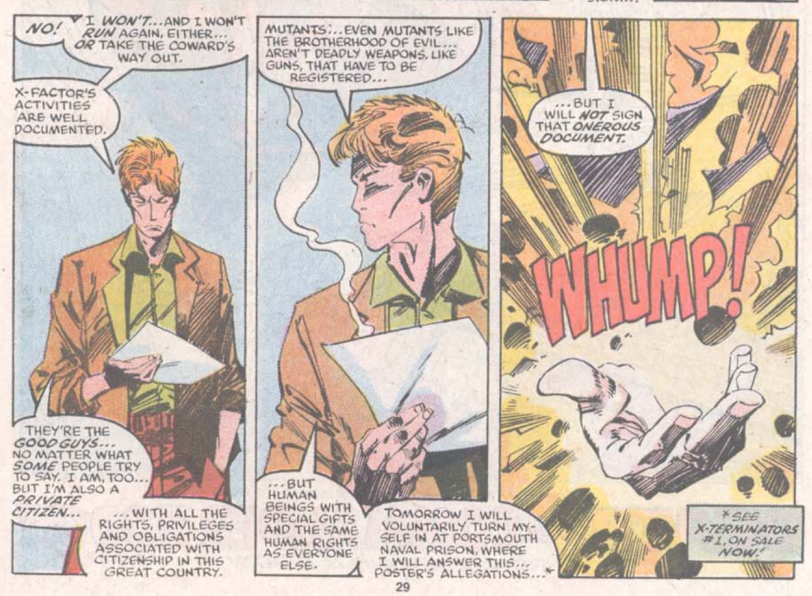 As for X-Factor, Beast, whose identity is already a matter of public record from his time with the Avengers, registers, while the rest of X-Factor, citing their roles as servants of the public, register their public identities (ie Cyclops, Marvel Girl, etc.) but don't give up their real names. I'm not sure if the Registration Act allows for that, but Mystique lets it pass without comment. I believe these will be the only mutants we ever see registering. 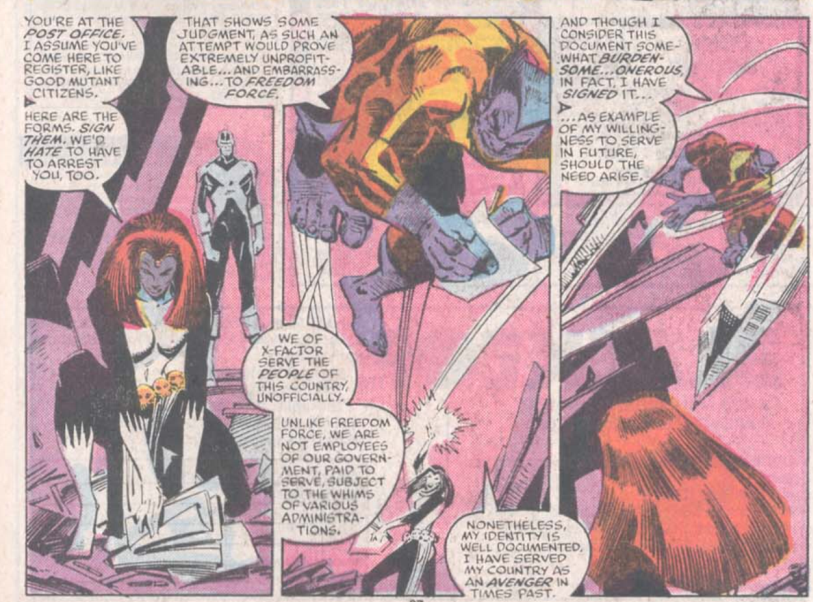 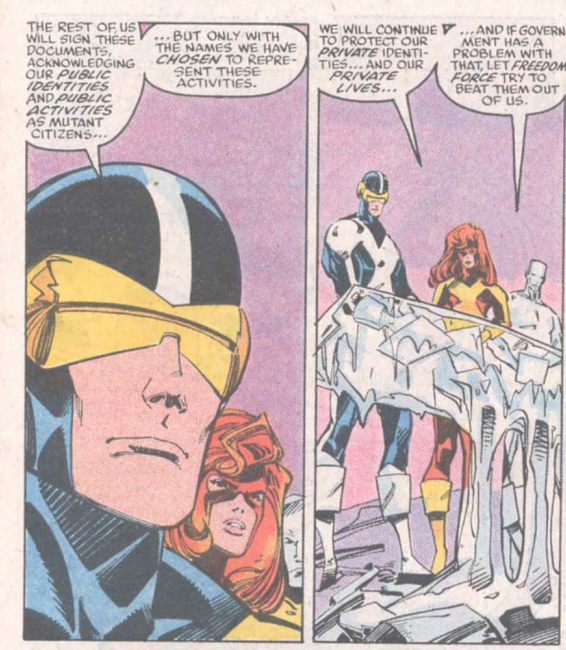 It's in the Mail
The letters page teases X-Terminators, of course, as well as the "Judgment War" story arc that follows shortly after "Inferno" (suggesting Simonson has planned this stuff out surprisingly far in advance). It's also said that Infectia's power gives her a natural "fatal attraction" effect that explains why Bobby was drawn to her despite his presumed better judgment (ie that her name is Infectia).

Teebore's Take
Though this issue is ostensibly about the triumphant return of Beast in all his blue, furry, erudite glory (as suggested by the cover), in fact, it's chiefly concerned with setting up or paying off a number of plotlines, both in the short and long term: shuttling the kids off to boarding school (leading into the X-Terminators miniseries), putting to rest Rusty's fugitive status, teasing "Inferno" and the search for Cyclops' son, offering resolution on the Mutant Registration Act, and setting up the return of Hodge and his confrontation with Death.

All that plus a fun action sequence between X-Factor, the kids and an Apocalypse-less Alliance of Evil, and an appearance by Freedom Force. It's to the Simonsons' credit that the issue doesn't feel more crowded, and that all those various pieces are given the room they need. In fact, the issue clips along at a nice pace, and all the happenings make it feel like the series is on the precipice of some big things - which it is. I always think of this issue as "the one where Beast comes back", but it's actually quite a bit more than that.

Next Issue
Next week, the X-Men travel to Genosha in Uncanny X-Men #236, followed by the debut of the third X-Men spinoff series with Excalibur #1.
Newer Post Older Post Home
Posted by Austin Gorton at 12:00 PM