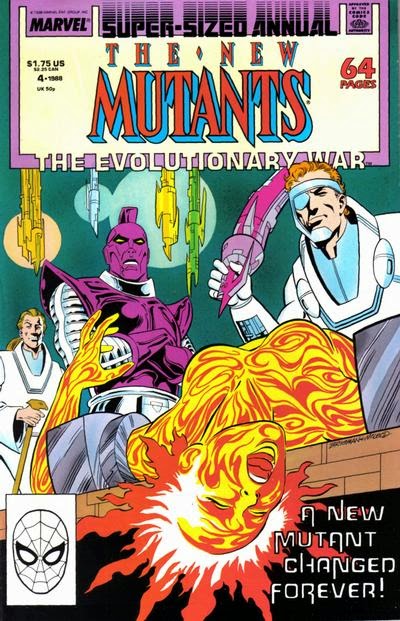 In a Nutshell
The High Evolutionary targets Magma and Mirage gets a new power.

Plot
Just outside New York, the Purifiers capture Bulk and Glow Worm, determined to strip them of their dangerous mutant abilities. At the X-Mansion, Sam and Warlock train in the Danger Room before Rahne arrives with a letter from Amara lamenting her arranged marriage. At the Purifiers base, they remove Bulk and Glow Worm's power, then receive another high power level danger alert, belonging to Amara. In Nova Roma, Amara is discussing her situation with Empath when the Purifiers arrive, overpowering the pair and teleporting away with Amara. When her father contacts the White Queen for help, and the White Queen calls in the other members of the Inner Circle, the New Mutants overhear Magneto's conversation and learn of the situation. Deciding to rescue Amara themselves, they teleport to the Purifiers' base. 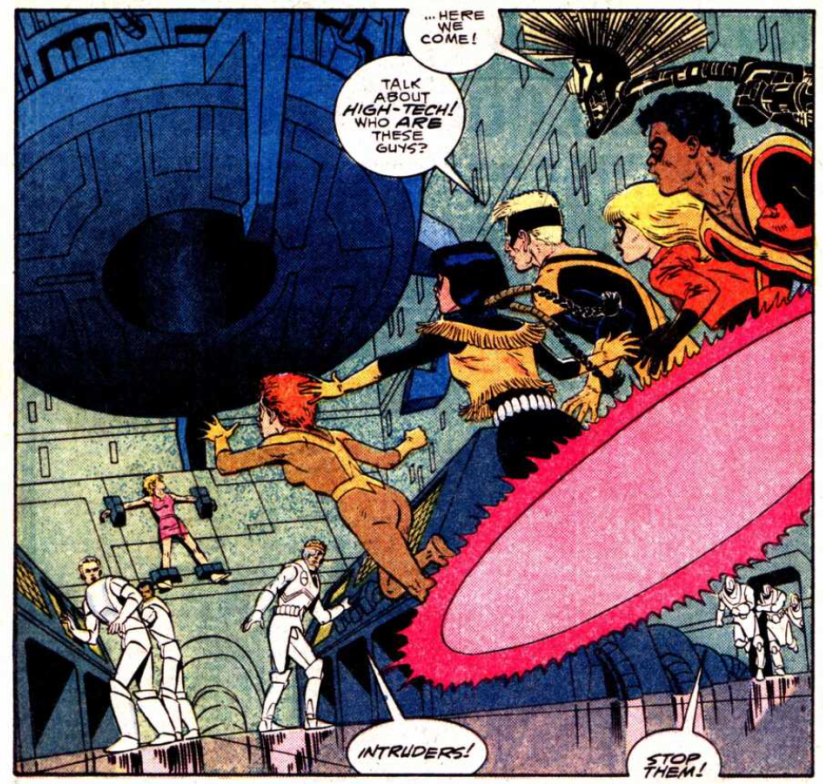 During the ensuing fight, Amara, Bulk and Glow Worm are freed, but Dani is knocked onto the power removal device. Using the last of his strength, Bulk changes the settings on the machine before he dies, and when Rahne and Roberto retrieve Dani, she discovers her power has changed, and that she can now physically manifest the images of fears and desires she pulls from her targets' minds. Just then, the Inner Circle, including Magneto arrives, and the New Mutants, including Amara, teleport back home before they're spotted. Back at the mansion, the New Mutants say goodbye to Amara before Illyana sends her back to Nova Roma, where her grateful father credits the White Queen with her rescue and return.

2nd Story: "If Wishes Were Horses"
Shortly after returning from rescuing Amara, Dani tests out the limits of her new power. After manifesting Brightwind's greatest desire, an attractive mare, she gets tossed off the horse and ends up creating a sports car to drive home. Pulled over for speeding, the car disappears as she creates the drivers license requested by the police officer. Thinking she's some kind of alien, the cop arrests her, but Dani is rescued by Brightwind, and creates her Spirit Lance in order to make the fake drivers license disappear. Realizing how cumbersome the lance is, she makes it into a smaller necklace, and resolves to wear it as her "default" manifestation.

Firsts and Other Notables
Dani's receives a significant power bump this issue, as her interaction with one of the High Evolutionary's machines modifies her mutant ability such that she can physically manifest other peoples fears and desires (including her own). So if someone is scared of a monster, she can make that monster real. She can only manifest one image at a time, so if she switches targets, the first image is replaced by the new one. 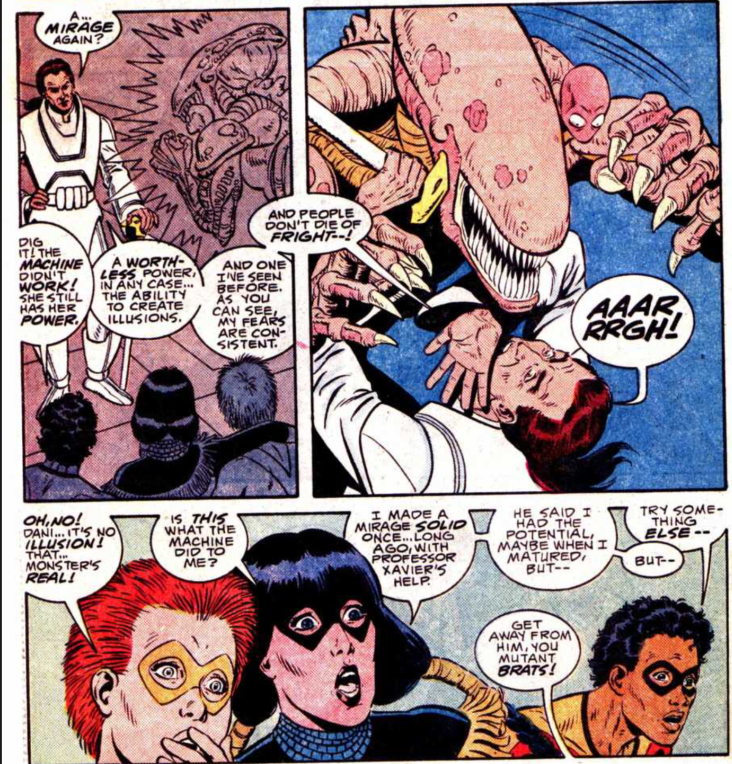 The backup story in this annul focuses on this new power and establishing some limitations on it. It ends with Dani deciding to use a miniaturized version of her Spirit Lance, worn around her neck, as the "default" object she's manifesting (so it'll disappear when she manifests something else, then return when she no longer needs to use her power for something else).

This chapter of "The Evolutionary War" finds the Purifiers targeting mutants whose powers threaten the planet: first, the radioactive Bulk and Glow Worm, then Magma. They're stopped by the New Mutants and the Hellfire Club before getting any further.

The Hellfire Club's plans for Nova Roma and Magma are referenced again, and Magneto is revealed to be aware of them, though once again, this subplot never really gets paid off. 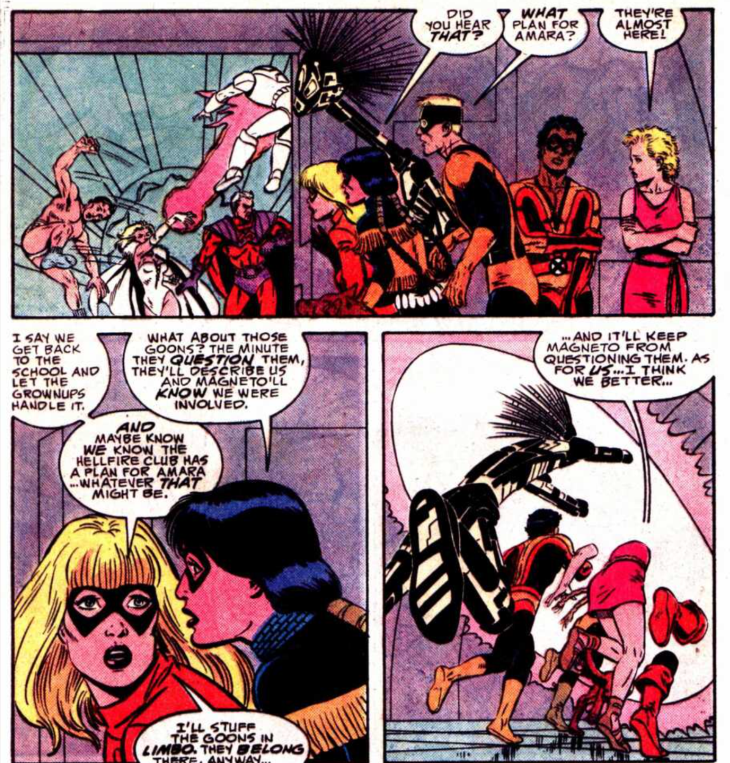 Bulk and Glow Worm, the two radioactive mutants who attacked X-Factor in issue #7 of their series, return and are killed off, dying of radiation poisoning after having their powers removed by the High Evolutionary's machine.

New Mutants co-creator Bob McLeod inks this issue, while Bob Harras shares editing duties with Ann Nocenti in preparation of his becoming the editor of the entire X-line.

The Chronology Corner
This issue takes place between New Mutants #66 and #67.

A Work in Progress
Magneto is essentially wearing his old Magneto costume, sans helmet, throughout the issue. Sebastian Shaw, meanwhile, shows up to fight looking like he got pulled out of a sumo match for some reason.

Dani used her Spirit Lance against Death in New Mutants Special Edition #1 and Power Pack #21, according to a footnote. 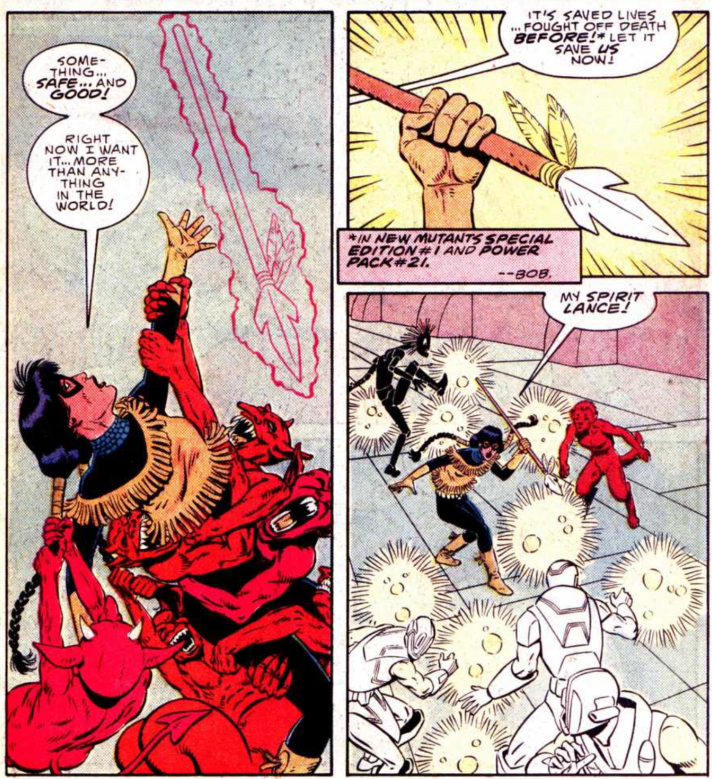 I Love the 80s
In the backup story, the cop who pulls over Dani wonders if he's on Candid Camera when her car disappears, then remembers that show had been cancelled. 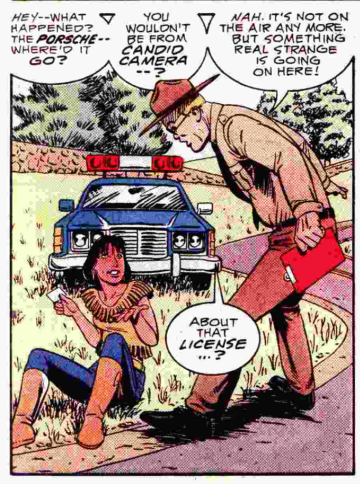 Dani's fake drivers license lists her as Poca Hontas, with an address of Gitchigumi Shores in Valhalla, NY.

Young Love
The New Mutants, or at least Rahne, are well aware of Amara's feelings for Empath by now. 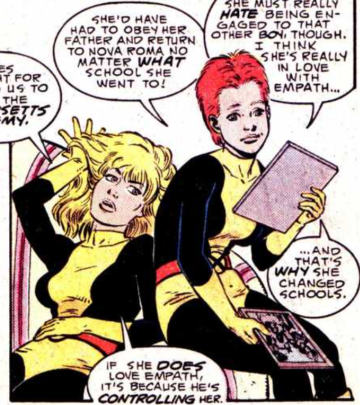 They're Students, Not Superheroes
Magneto once again reminds the students they're grounded, and scolds them for popping into the Danger Room unannounced. 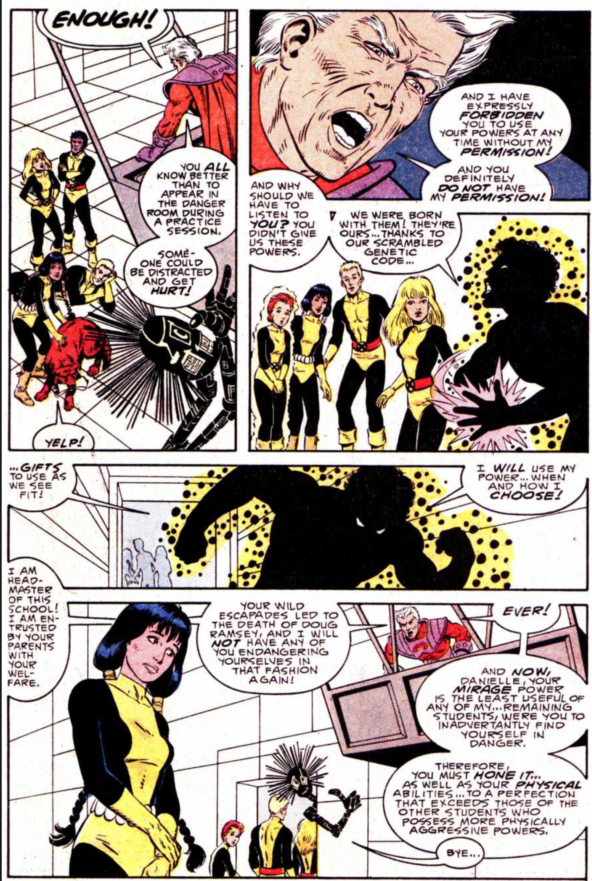 Later, Magneto cites in loco parentis, an actual legal responsibility given to some individuals or organizations to act on behalf of a student's best interests in the place of their actual parent or guardian. It usually applies to colleges and universities, and often boarding schools like Xavier's.

After her power is changed, Dani worries about having to carry her Spirit Lance around at parties.

Teebore's Take
The big development in this issue is Dani's new power. It is, to say the least, a dubious development, as it is a ridiculous power-up for a character who can also see and battle Death and rides a winged horse, and a power-up that goes largely undefined or restrained. We know that Dani can only physically manifest one image at a time, but is there any limit to what she can manifest? If she makes, say, a tank, does it come with tank shells? Does the damage they inflict disappear along with the tank, or remain even after the tank is gone? Can she manifest things without knowing how they work (presumably she can, unless she's intimately familiar with the operation of a car)? If so, why not periodically create a machine that cures all disease and go on a whistle-stop tour of hospitals? Or a machine that makes it so she can manifest multiple images at a time? Simonson tries to put some limitations on this power, and the the desire to amp up Dani's abilities is understandable (with Doug gone, she's now the weakest character in a fight, strictly in terms of her mutant ability), but this power-up is so huge and limitless it's laughable.

The other thing this issue does is hammer home the schism that's developed between the New Mutants and Magneto since Doug's death (and even before). The problem is that it continues to be a case of being told one thing and shown another. The New Mutants repeatedly bemoan that Magneto is being harsh and unforgiving, and that they are justified in disobeying him, sneaking out to be superheroes. Except they're not justified, and Magneto isn't harsh. He's right to ground them - Doug died because they snuck out on their own. He's right to require them to train in the use of their powers, and not to teleport into the Danger Room unannounced - it's called the Danger Room for reason.

Magneto isn't asking or expecting more of the characters than Professor X ever did, and it seems like the only reason they're whining now is because Simonson seems to think the only way to convey "teenage" is turn the characters into petulant brats while throwing Claremont's characterization of Magneto under the bus. Maybe the New Mutants/Magneto schism would read better to me if I was brimming with adolescent angst and teenage rebellion, but even as a kid this all felt off and forced.

Next Issue
Next week, the Brood return in Uncanny X-Men #232, Illyana battles Forge for real this time in New Mutants #66, and Iceman runs afoul of Infectia in X-Factor #31.
Newer Post Older Post Home
Posted by Austin Gorton at 12:00 PM