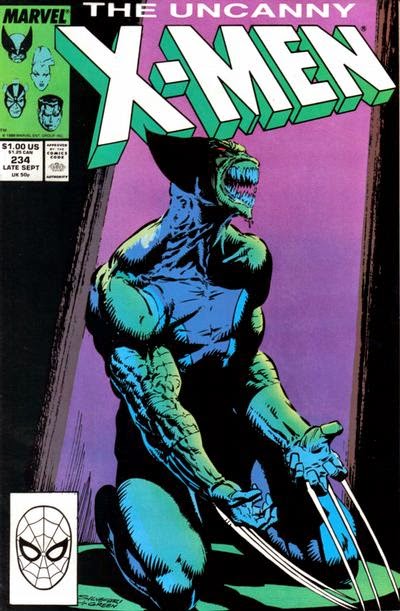 In a Nutshell
The X-Men defeat the Brood.

Plot
In Denver, the X-Men continue to battle the Brood-infected mutants, though Rogue and Psylocke remain under their control. In Australia, Madelyne dreams of meeting S'ym, and accepting from him power enough to hurt Scott, though S'ym tells her this is no dream. At the Red Rocks amphitheater, Reverend Conover's wife Hannah, suffering from arthritis, is tended to by Josey Thomas, Harry Palmer's paramedic partner. Meanwhile, the Brood and a hoodwinked Rogue, zeroing in on the theater, are attacked by the captured Wolverine, fighting the Brood egg implanted inside him. Nearby, the X-Men target a car carrying more Brood and Psylocke, freeing her. As Reverend Conover begins his service, Wolverine lands on the stage, in the midst of transforming into a Brood. 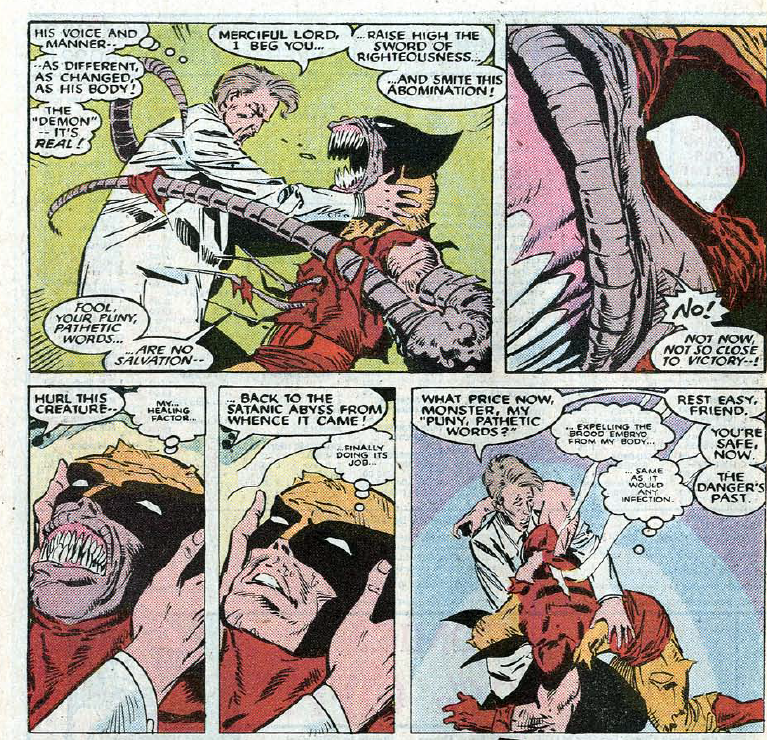 The Brood briefly takes control, attacking Conover, but he attempts to exorcise the demon just as Wolverine regains control and the rest of the X-Men and Brood-mutants arrive. The X-Men gain the upper hand until Harry takes Hannah hostage, but Wolverine is able to sneak up behind him, separating Harry from the woman. The Brood briefly allows Harry's personality to resume control, hoping Wolverine will spare him, but Wolverine doesn't hesitate, killing the man and the Brood inside. In the aftermath, Reverend Conover and Hannah, her arthritic hands miraculously cured, tell the media he and his congregation were saved by mutants as Josey walks away, smiling. Meanwhile, the X-Men return home, celebrating their victory, as an unconscious Madelyne lies transfigured by a dream that will soon become reality.

Firsts and Other Notables
The threat of the Earth-bound Brood is seemingly ended this issue, with the X-Men killing Harry Palmer and all of the mutants he infected with Brood eggs, though it's heavily implied that Harry's paramedic partner Josey infected Reverend Conover's wife Hannah with a Brood egg off-panel; this narrative thread won't end up being resolved until the two part X-Men vs. Brood: Day of Wrath minseries (featuring early Bryan Hitch art) in the 90s. 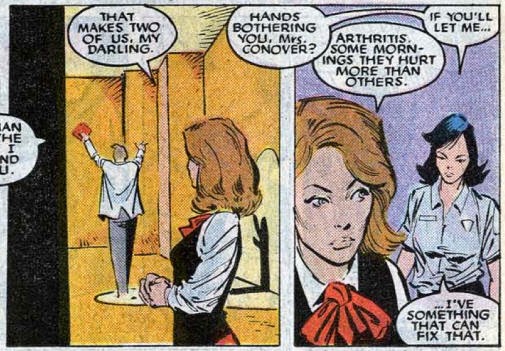 This issue, Madelyne experiences what she believes to be another creepy dream/vision, in which she interacts with S'ym and makes a deal with him for the power to get revenge on Cyclops, though S'ym suggests their interaction is more than a dream but actually happening (he's right), all of which is more "Inferno" setup. We also see Madelyne in her future Goblin Queen attire for the first time. 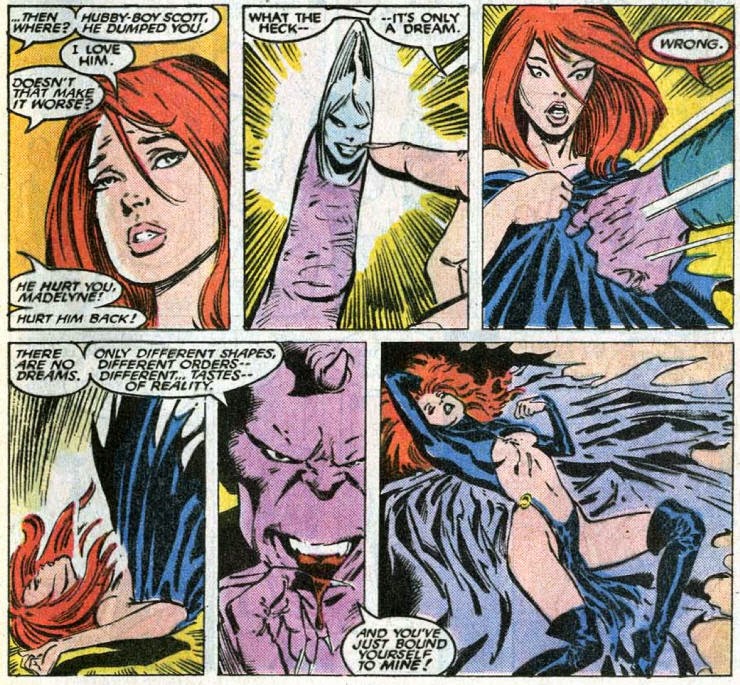 Joe Rubinstein fills in for Dan Green on inks, and it seems like some of the edginess and horror atmosphere is lacking in the art as a result.

A Work in Progress
In a subtle testament to just how much the X-Men have changed, at one point in this issue Colossus comes up behind one of the Brood and snaps his neck, killing him, which passes without comment from Colossus or anyone else. 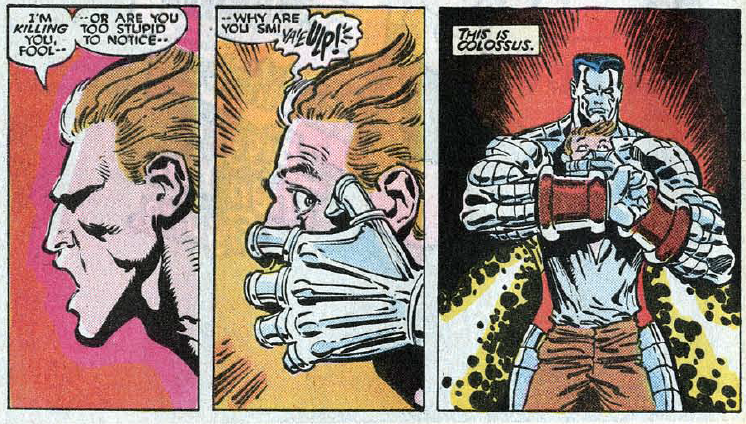 Havok, however, who is now firing killing blows at the Brood, at least acknowledges how much easier it's become for him to kill since last issue. 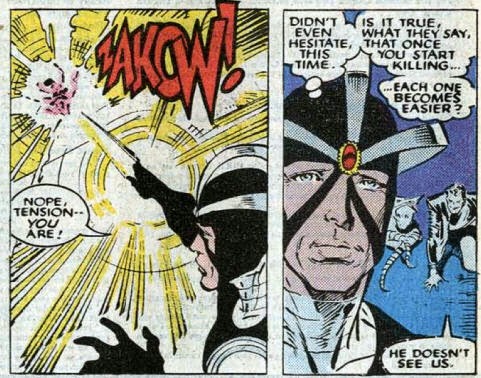 X-Factor's Trish Tilby reports on the events in Denver.

Human/Mutant Relations
Reverend Conover considers "mutie" akin to any other racial slur, and won't abide them. 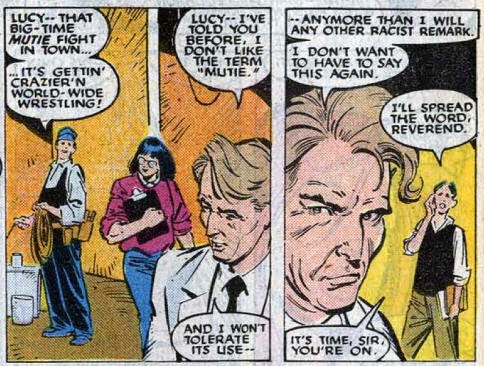 For Sale
The inside cover has an ad for an assortment of mail-away GI Joe figures and vehicles, which, back in the day, was one of the few opportunities kids had to get a hold of older figures no longer carried by toy stores (I'm pretty sure I got my Bazooka figure from this mail away offer, though I have no idea why I didn't also get Major Blood, whom I never had but always wanted. Maybe I didn't have enough Flag Points...). 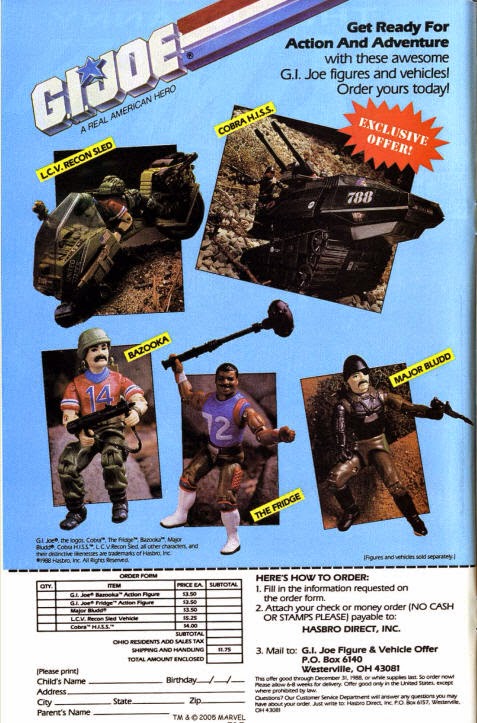 We also get a full page ad for Wolverine's upcoming solo series. 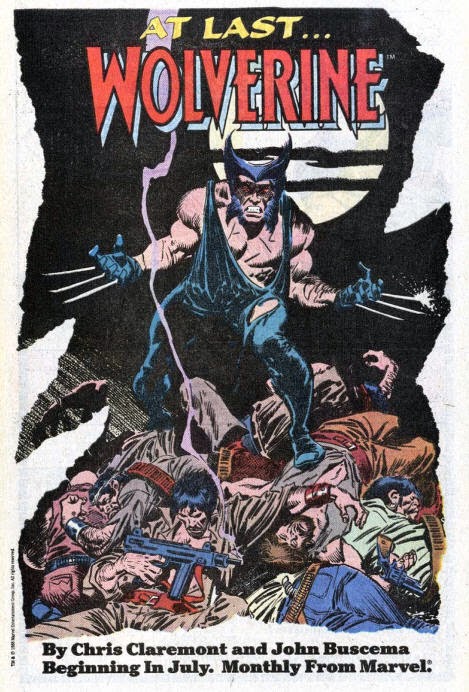 Teebore's Take
And with that, "Earthfall" comes to a brisk close. Built as it is on a horror-movie atmosphere and the moral quandary that comes along with the Brood, it's relative brevity is what allows this three-parter to succeed. Neither of those elements are given the time to become turgid or tired, and are heightened for how quickly this story unfolds (in terms of passage of time, the entire story unfolds more or less in a single evening; a far cry from the weeks the X-Men spent in space during the last Brood story).

As a showcase for the X-Men's new "take no prisoners" attitude, the pace of this arc helps, too: last issue, Havok struggled with the morality of killing Brood-possessed mutants who are otherwise innocent. After Storm emphasized that the hosts died the instant they were infected, Havok, along with the rest of the X-Men, is seen striking killing blows throughout this issue, with only Havok noting with concern how quickly he's taken to the idea of killing his foes. Despite the moral question at its core, this isn't the deepest or most complex X-Men story, and it suffers some routine beats in its middle chapter. But for its atmospheric setting, fast pace, and depiction of an X-Men team ready to take the fight to their enemies and kill if necessary, it's an entertaining and effective first look at the darker, edgier X-Men of the Outback Era.