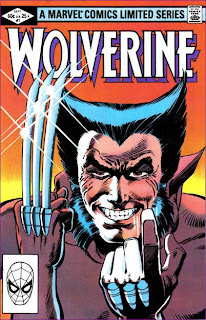 In a Nutshell
Wolverine goes to Japan to fight for Mariko.

Plot
Issue #1: In the Canadian Rockies, Wolverine tracks down a wounded bear and puts it out of its misery, before capturing the hunter who broke the law in poisoning the bear. Returning to New York, he attempts to contact Mariko, but is rebuffed, prompting him to fly to Japan. In Japan, he meets with his friend Asano, a government agent, and learns that Mariko's father, Shingen, has returned and forced Mariko to marry a man to whom Shingen is indebted. Wolverine confronts Mariko, who insists she must honor her father's wishes. Wolverine is suddenly drugged and awakens before Mariko and Shingen, who challenges Wolverine to a duel with wooden practice swords. Groggy from the drugs, Shingen easily overpowers Wolverine, forcing Mariko to concede that Wolverine is not worthy of her. Knocked out, Wolverine awakens in Tokyo and is attacked by a street gang, but is saved by a mysterious woman. 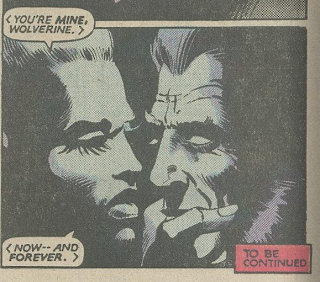 Issue #2: Wolverine awakens in a strange apartment, surrounded by ninjas of the Hand and the woman who rescued him, who introduces herself as Yukio. Together, they fight off the ninjas and retreat to Wolverine's hotel, where Yukio attempts to seduce him, but thinking of Mariko, he rejects her. Later, Yukio angrily meets with her employer, Shingen, who explains the Hand had to attempt to kill her in order to fool Wolverine into thinking the attack was real. He then orders her to kill a rival crime lord, Katsuyori, before killing Wolverine. Yukio tells Wolverine that Katsuyori is the master of the Hand who tried to kill her, and together they infiltrate his castle on the night he's meeting with Mariko and her husband. When Katsuyori's assassins attack, Wolverine is forced into a berskerker rage to defeat them, horrifying Mariko, who had never scene that side of him. Yukio blows up Katsuyori in his car, pleased with Mariko's reaction to Wolverine. 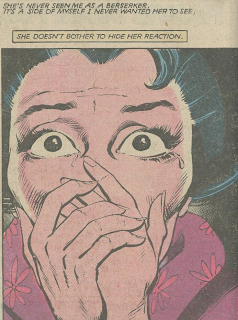 Issue #3: Drowning his sorrows in booze, brawls and Yukio, Wolverine is approached by Asano, who wants his help identifying and neutralizing a new crimelord who has taken over the Japanese underworld, but Wolverine refuses. That night, as Wolverine dreams of Mariko, Yukio is visited by the Hand, who insist that she kill Wolverine, but she kills them instead. As Wolverine awakens, he mutters Mariko's name, infuriating Yukio. At Wolverine's hotel, Yukio mistakes Asano for another Hand assassin, and kills him. When Wolverine finds Asano, he smells Shingen on the blades which killed him, and realizes that Shingen is both the new crimelord and that Yukio is working for him. Chasing her to a Zen garden, Wolverine attempts to kill Yukio, but the Hand attack. Wolverine and Yukio defeat them, but Yukio escapes in the process, at which point Wolverine decides to take the fight to Shingen and prove he's a man, not a beast, by rising above his recent circumstances. 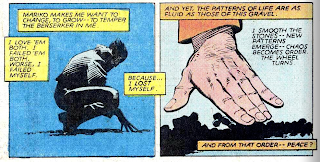 Issue #4: One by one, Wolverine sets about systematically dismantling Shingen's criminal empire. Shingen sends the Hand after him, but Wolverine overcomes them all, sending their hoods with a note challenging Shingen to combat. Meanwhile, Mariko, having realized how evil her father is, agonizes over her desire to stop him and her duty to obey him. As Wolverine prepares to assault Shingen's manor, Yukio sneaks inside, hoping to kill Shingen to make up for killing Asano, but she is captured. Wolverine fights his way inside and when Mariko's husband tries to flee using Mariko as a hostage, Yukio kills him. Face to face, Shingen and Wolverine fight, with Wolverine barely but ultimately coming out on top, killing Shingen. Worried that Mariko will now feel honor bound to kill him for killing her father, Mariko instead presents Wolverine with the Honor Sword of Clan Yashida, revealing she would have killed Shingen for dishonoring their clan had Wolverine not. Months later, the X-Men receive an invitation to Wolverine and Mariko's wedding.

Firsts and Other Notables
In addition to being Wolverine's first solo series, kicking off what will eventually comprise countless ongoing series, miniseries, one shots and specials, this is also one of Marvel's first limited series ever (a distinction it shares/vies for with Contest of Champions, depending on how you define "first": cover date, on sale date, date of conception, etc.), making it a significant benchmark in the rising popularity of Wolverine as a character at the time of publication.

Art in this series comes from superstar artist Frank Miller, at the time in the midst of his acclaimed and groundbreaking run on Daredevil. Not yet at the height of his abilities, Miller's work is still remarkably strong, featuring some amazing panel/page layouts that make the most of white space and some wonderfully choreographed fights.

Yukio makes her first appearance in the first issue of the series. She will go on to play a significant role in the upcoming story in Uncanny X-Men #172-173, and remain a minor supporting character in the X-Men universe and Wolverine's titles. 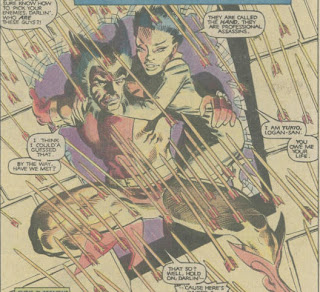 Mariko's evil father, Shingen Yashida, also makes his first appearance, and while he doesn't make it out of the miniseries, his actions therein will have reverberations on Wolverine and Mariko for years to come.

Wolverine mentions the only family he knows is his father; later stories will make it clear that he shouldn't have any recollection of his actual father at this time, though with all the various memory implants we'll eventually learn he's been given, it's possible he believes he knows his father at this point. Similarly, Wolverine doesn't recognize the ninjas of the Hand, though later stories will reveal he's fought them before.

Early in issue #1, Wolverine returns to New York after his Canadian vacation, at which point he attempts to contact Mariko, leading him to go to Japan. The events of "God Loves, Man Kills" are intended, I believe, to occur during that period of time.

A Work in Progress
Asano, whom Wolverine's calls one of his oldest friends and whose murder helps push him into action against Shingen, represents the first in a long tradition of characters who pop up in a Wolverine story, are proclaimed to be one of Wolverine's oldest/best/dearest/most important friends despite having never appeared before, and then are killed and/or never mentioned again once the story is over.

Wolverine tracks a hunter to Josie's Bar in the Canadian Rockies, a setting/encounter that often gets ported over into other mediums. 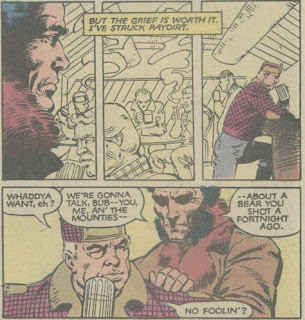 Wolverine's healing factor remains remarkably down-to-Earth throughout this story; he takes time healing, poisons affect him, and he can get drunk.

Miller draws Wolverine's mask as a cowl attached to his costume which can be pulled off and left to hang around his neck, the first such depiction of the mask in this manner (as opposed to the more helmet-like mask that Byrne and Smith have drawn). 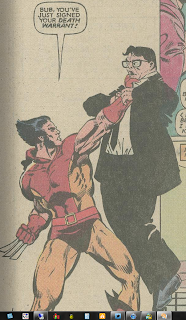 I Love the 80s
It has to be noted that much of Claremont and Miller's depiction of Japan throughout this series is ridiculously stereotypical (not that they are alone in this depiction of Japan in comics or other mediums), with all the characters talking of honor and large swaths of story that, if you didn't know any better, could be assumed to be taking place in feudal, not 20th century, Japan.

Claremontisms
Claremont dusts off and tweaks a favorite turn of phrase, describing Shingen as moving with a "grace which belies his age.

Young Love
Wolverine spends a good chunk of this series in a friends-with-benefits style relationship with Yukio (though she sincerely loves him), but ends the series engaged to be married to Mariko, leading in to the events of Uncanny X-Men #172-173. 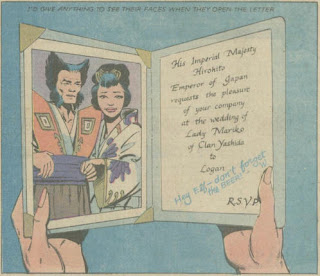 The Best There is at What He Does
Though we've already encountered it, the first page of the first issue of this series constitutes the first usage, in terms of publication date, of Wolverine's catchphrase.

Teebore's Take
Though this series doesn't represent Wolverine's first time in the spotlight, it does serve as a benchmark for the character's rising popularity, as fans were clamoring enough for more Wolverine that Marvel decided to make him the star of arguably their first limited series. Its success, in part, led to Wolverine's popularity snowballing to the point where, today, he appears in approximately 629 different comic books each month. But we shouldn't hold that against this series, which in addition to being groundbreaking and historically significant remains a rollicking good read, as well as the definitive Wolverine story.

The "film noir meets Shogun" sensibility which informs Wolverine to this day begins in earnest here; Wolverine's past ties to Japan had been previously established, and Claremont had already toyed with the idea of Wolverine as the noble savage before, but all of that becomes codified in this series: the Wolverine we know today is more or less born in this series. Claremont eschews a third-person narrative voice throughout, instead telling much of the story through first person captions written in Wolverine's voice (a technique he also used in the contemporaneous X-Men #162, the solo Wolverine issue of the Brood saga). Not only will that voice become the predominant one used by Wolverine in the years to come, the technique itself will eventually come to dominate modern comics.

The story itself is tight and focused: this truly is a Wolverine solo series, written almost entirely from his perspective and with few supporting characters sharing the spotlight. Aside from Wolverine's claws, mentions of his healing ability, and the Hand ninjas, there is little to suggest this is even a superhero story. At its core, it's a story about a guy trying to overcome his worst instincts and win back his girl. While plenty of material herein will be mined almost to the point of caricature by later creators (the tough guy persona, the ironic connection to Japan, the preponderance of ninjas), it's important to try and not hold its success against what is, first and foremost, a well-written and magnificently-constructed story.

Next Issue
Uncanny X-Men #172 has the X-Men arriving in Japan for Wolverine's wedding, while New Mutants #7 introduces us to Mr. T stand-in Axe. I pity the fool who doesn't like...he.
Newer Post Older Post Home
Posted by Austin Gorton at 8:00 AM