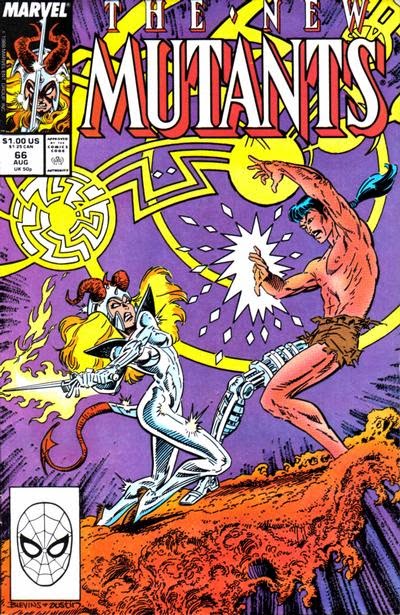 In a Nutshell
Illyana battles Forge.

Plot
In Dallas, Illyana confronts Forge, determined to kill him as revenge for his role in the deaths of her brother and the X-Men. A surprised Forge, whose magical abilities are tied to Earth, manages to hold her off, and as they battle, the rest of the New Mutants debate what to do. When they decide to intervene on Forge's behalf, Illyana teleports everyone to Limbo, where her power reigns supreme. Restraining the New Mutants, she and Forge resume their battle, during which her scrying glass is destroyed and Forge gradually realizes that Illyana is little more than an angry, grieving child, not so different than he was in Vietnam when he cast the spell the X-Men died to complete. 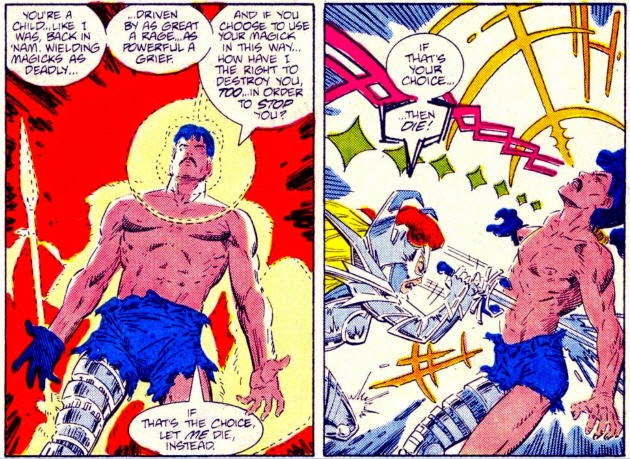 Forge stops fighting her, telling her that if she wants to kill him, he won't stop her. Illyana answers by running him through with her Soulsword, though this only disrupts his magical abilities. As the demons in Limbo egg Illyana on to finish him, Dani uses her power to create an image of Illyana's greatest fear: herself fully transformed into the Darkchilde. Realizing killing Forge would make that fear a reality, she relents, sending Forge back to Earth and returning her teammates to the school. When they arrive, they note that Magneto, whom they believe didn't even notice they were gone, is dressed in his old villain attire. Elsewhere, the alien Spyder promises one of his slaves, Gosamyr, her freedom if she brings him Lila Cheney.

Firsts and Other Notables
Spyder and Gossamyr both appear for the first time in the closing pages of this issue. They will be the focus of the book's next big story arc before giving way to "Inferno", with Gossamyr eventually joining the team briefly. More on them (unfortunately) in future posts. 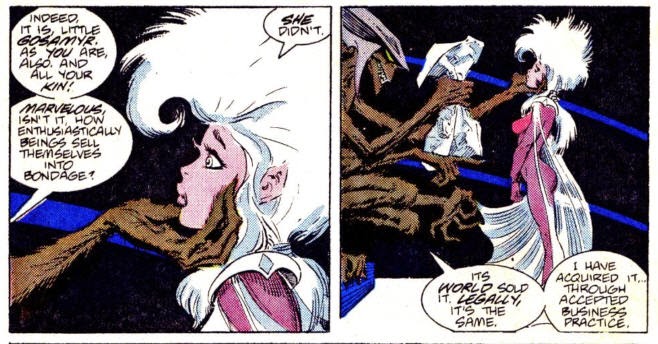 Illyana's scrying glass is destroyed this issue (as mentioned in New Mutants Annual #4), though since it was only ever used intermittently and never to its full potential, it's destruction doesn't really amount to a whole lot. 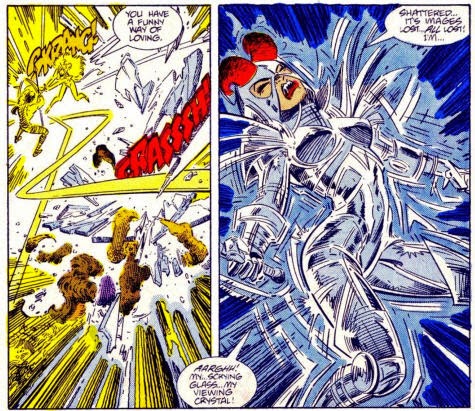 As also seen in New Mutant Annual #4, Magneto has returned to wearing a variation of the costume he wore as a villain, sans helmet and with a large "M" added to the chest plate. 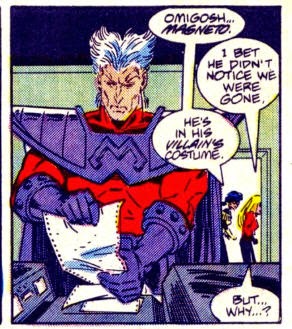 The Chronology Corner
As previously mentioned, the New Mutants' appearances in Uncanny X-Men #231 and New Mutants Annual #4 occur between this issue and the next.

A Work in Progress
In another hint at "Inferno", the New Mutants discover a rock leering at them after its hit by a stray blast from one of Illyana's spells. 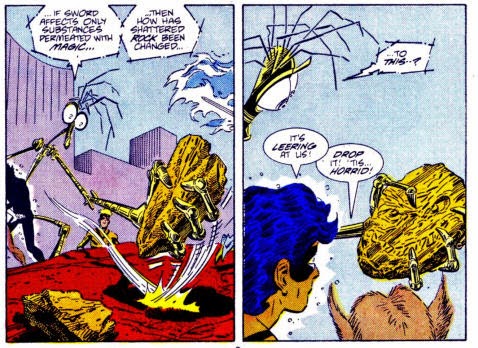 We also get our first look at Blevins' take on Illyana's full Darkchylde persona, an image we'll become very familiar with before the end of "Inferno". 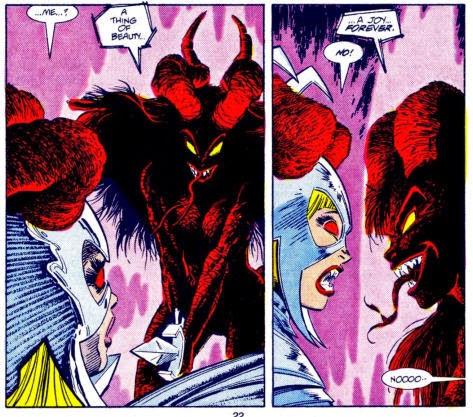 I Love the 80s
Forge battles Illyana wearing (his trademark?) cutoff jean shorts and what appear to be pixie boots. 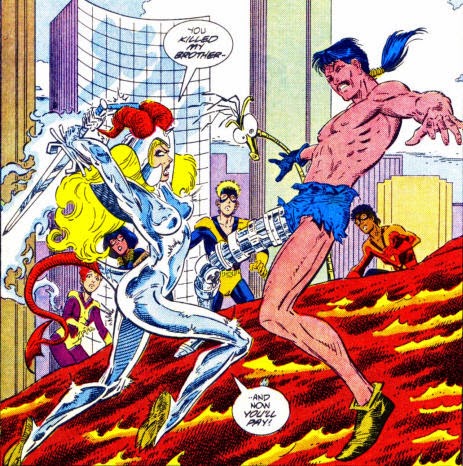 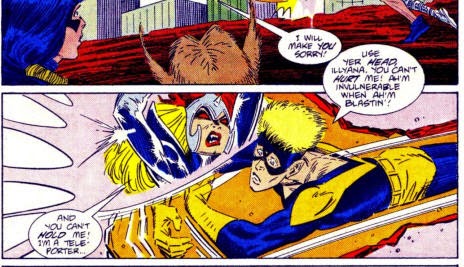 It's in the Mail
Letters in this issue center around issues #53 and 54, with at least one writer specifically requesting they don't kill Doug.

Teebore's Take
So Illyana confronts Forge (for realz this time), and it goes about how you'd expect it to go: they fight for a while, Illyana rejects her dark side, then returns Forge to earth. Nothing here is bad, per se, but it isn't exactly riveting either. The other New Mutants don't really even do anything besides watch (due to indecision on Earth and because Illyana forcibly restrains them in limbo), with only Dani contributing any significant action in this issue besides Illyana. Even Blevins seems a little bit bored, depicting the action in basic three or four panel pages with little variation. The idea of Illyana confronting Forge over the death of the X-Men is a story that deserved being told, and Simonson deserves credit for not blowing past the events of "Fall of the Mutants" immediately after the crossover wrapped, but this is probably a story that could've been told in fewer issues, which, unfortunately, is something that will be said a lot about future Simonson New Mutants stories.

Next Issue
Tomorrow, Infectia tries to smooch Iceman in X-Factor #31. Next week, the X-Men battle the Brood in Uncanny X-Men #233, and Spyder (...) makes his move in New Mutants #67.
Newer Post Older Post Home
Posted by Austin Gorton at 12:00 PM