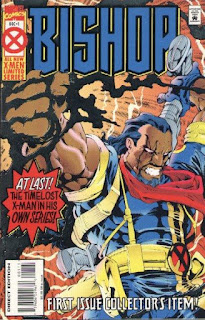 In a Nutshell
Bishop battles the remaining fugitive from his time, Mountjoy.

Plot
Issue #1: Following yet another Danger Room session in which Bishop replays the circumstances surrounding Malcolm & Randall's deaths, Storm & Xavier order Bishop to accompany Storm into the city to attend a play. On his way out, he passes his holoprojector to Forge, telling him it contains memories of his sister but is in need of repair. Meanwhile, in the wake of Fitzroy's death, Bantam is being hunted by Mountjoy, a fellow time traveler whom only Bantam is aware is in the present time. Calling the X-mansion to get Bishop's help, he learns he's in the city, and tracks him down. When he does, a fight breaks out between Bishop, Storm & Mountjoy. Bishop is able to force Mountjoy out of Storm's body & drive him off, but is injured in the process.

Issue #2: Following a nightmare, Bishop wakes up in the X-mansion infirmary. Forge gives him the repaired holographic projector, telling him he's improved it so now Shard is tied to Bishop's brainwaves, making her as real as possible. With Shard's input, Bishop decides he needs to track down & kill Mountjoy, and if that means he has to leave the X-Men, so be it. As Mountjoy claims another body as he searches for Bishop & Bantam, Bishop & Shard go to a police station near where Mountjoy claimed his first victim. The body-swapped Mountjoy is there, and a fight breaks out between him & Bishop. In the course of the fight, Bishop is knocked out, and when he wakes up, he's seemingly back in his own time.

Issue #3: After Bishop relives significant moments from his past, including his induction into the XSE & Shard being promoted above him, he wakes up back in the present, and continues his pursuit of Mountjoy. But he is badly injured, and Mountjoy is able to take advantage of his weakness to take control of his body, thus learning that he can hurt Bishop most by destroying the X-Men.

Issue #4: The Mountjoy-possessed Bishop returns to the mansion, and Mountjoy quickly abandons Bishop in favor of Gambit, Psylocke & Archangel. However, Bishop has a plan, and lures Mountjoy into the Danger Room, where the Shi'ar tech will enable Shard to become solid. Together, they attack Mountjoy, but he takes Shard hostage. She urges Bishop to blast them both, even with the risk that the blast could disrupt her energy matrix. Bishop reluctantly does so, knocking out Mountjoy & freeing the X-Men. Shard is damaged, though, and the two siblings are forced to say goodbye once again as Shard fades away. Watching from the control room, Xavier is impressed with how much Bishop has grown & changed, and notes that Bishop's choice not to kill Mountjoy means he truly is one of the X-Men now.

Firsts and Other Notables
Bishop gets the X-Men solo limited series treatment, following in the footsteps of Gambit, Sabretooth & Deadpool (twice) as Marvel floods the bursting market with as many books featuring its best-selling characters as possible. Like Deadpool, Bishop will receive a follow up miniseries (as well as feature in an additional miniseries), and like both Deadpool and Gambit, Bishop will also eventually gain his own solo series in the wake of this (though it will be neither as critically well-received nor last as long as their respective ongoing series).

The villain of this story is Mountjoy, making his first appearance. He is another fugitive from Bishop's future, with the power to either insert himself into another person's body (controlling their actions while still maintaining their physical appearance) or to absorb another person into his body (thus gaining all of that person's memories and abilities while maintaining Mountjoy's default appearance). As such, he traveled back in time riding inside Fitzroy's toady Bantam, which is why neiother Bishop nor readers were aware he existed until now, despite both believing Bishop had hunted down all the time fugitives previously. He pointedly survives this story, and will return later in Warren Ellis' Excalibur run, but beyond that, he never really amounts to much. 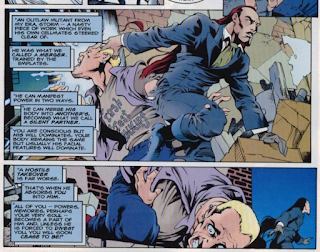 Bishop asks Forge (who is hanging around the mansion for some reason) for help repairing a holographic projector from his time that contains the brain patterns & memories of his sister Shard. This leads to Forge improving the device such that it allows a fully interactive recreation of Shard to appear, making issue #2 the first appearance of this iteration of Shard, who will eventually join Forge as a member of X-Factor (she seemingly "dies" at the end of this story, but she'll back. In hologram form). 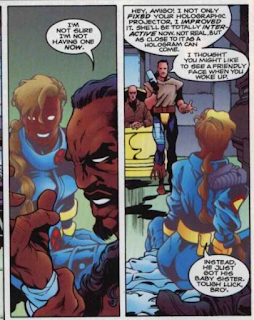 Fitzroy’s toady Bantam, last seen in “Child’s Play”, reaches out to Bishop for help, in the wake of Fitzroy’s apparent death in that story, seeking protection from Mountjoy, whom Bantam has secretly helped bring to the past. Bantam will pop up next in Bishop's later solo series. 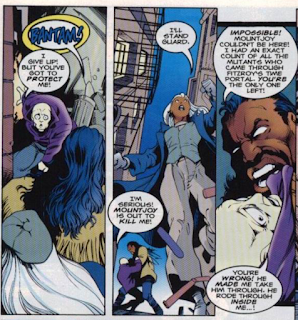 During a dream, Bishop overhears Jean repeating one of the key phrases from her “X-Traitor” recording (first revealed in Uncanny 287), which will become important again at the start of “Onslaught”.

During one of Bishop’s flashback, he is talking to the blind Hancock, appearing for the first time, who references the Summers Rebellion, an event which will later be depicted in Peter David’s second X-Factor run. Hancock will appear in flashbacks to Bishop's future in some later issues. 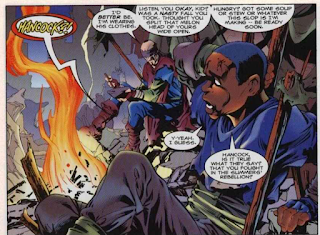 Hancock mentions a group of characters, one of whom, Hecate, will appear in later issues as well. 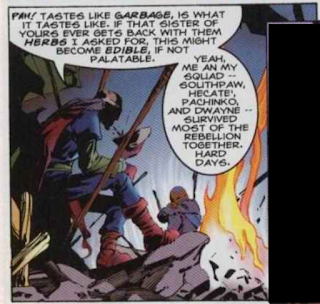 The series was later collected under the title "The Mountjoy Crisis", though that name isn't used at all here (nor amongst fans, as far as I know, at the time).

The first issue concludes with a pinup. 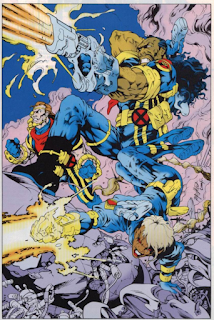 Creator Central
John Ostrander, a writer probably best-known for his DC work (and his later work on Dark Horse's Star Wars books) pens this series; it is, I believe, his first work for Marvel. He will continue to work on the fringes of the X-universe for the next few years, including a second Bishop and an XSE miniseries.

It is drawn by Carlos Pacheco, his first work for stateside Marvel (he had done some Marvel UK issues previously). He will also draw the two issue X-Universe miniseries during "Age of Apocalypse" and a Starjammers min, and later become the regular artist on Excalibur, and then Adjectiveless X-Men (and, much later, help launch the second volume of Uncanny X-Men).

The Chronology Corner
Bishop appears here between X-Men Annual #3 and Excalibur #83. Somewhat curiously, this is after Uncanny #318, when Jubilee left for Generation X, despite her being the one to take Bantam's call in issue #1.

A Work in Progress
The opening pages of issue #1 are a pretty faithful recreation of Uncanny #287, the issue in which Malcolm & Randall are killed.

Bishop says that Mountjoy was trained by the Emplates.

When Mountjoy absorbs Storm, he uses her body to hurl lightning at Bishop, who fires it back at him. Mountjoy is in the air, so he is unharmed due to not being grounded, but Bishop’s power doesn’t really work that way; he doesn’t redirect the specific energy he absorbs, he takes it in then releases it as a concussive force blast.

Mountjoy also employs a “basilisk field”, enabling him to slow the reaction times of people around him.

Xavier rightly posits that Bishop & Shard’s future is likely an alternate future relative to the present. 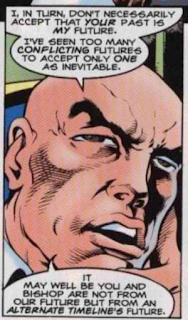 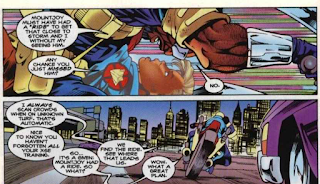 Shard is credited with capturing Mountjoy in the future.

In the future Bishop & Shard argue over Bishop’s desire to continue patrolling the streets rather than climb the ranks of the XSE. 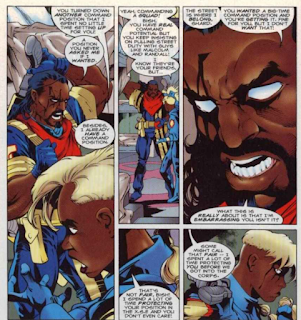 The Grim 'n' Gritty 90s
This miniseries takes the "first issue fancy cover" dictum to the extreme (X-TREME!!!) by giving each issue of the series a cardstock foil-enhanced cover.

Austin's Analysis
Bishop getting his own limited series had to be something of a no-brainer in late 1994. The character was still extremely popular, yet little of his pre-X-Men past had been revealed, and while his profile had diminished a bit from the heady days following his introduction, he remained an integral part of the X-Men, featuring regularly in most of the line's biggest stories. So giving him a solo series as part of the efforts to push as much X-product as possible while the line is riding high makes sense. The end result is far from perfect, but remains mostly entertaining. Certainly, more entertaining than the character's present-day representation as an icon of 90s excesses & bad trends would suggest.

It's biggest problem with this story is repetition, as it is essentially a four issue-long fight against one villain, with only a few minor details surrounding the fight changing from issue to issue (first, Mountjoy is possessing Storm. Then bystanders. Then a chunk of the X-Men, all the while Bishop angsts about hurting the people Mountjoy is controlling and/or trying to figure out a way to force Mountjoy out of his body du jour). It also doesn't help that Mountjoy isn't the most engaging of villains, and suffers from power creep on top of that (he can possess people, or absorb them, and also, it's hard to hit him). And the central character conflict of the story - is Bishop an XSE officer or one of the X-Men? - is essentially the same arc that has defined the character since his inception. There's nothing wrong with revisiting a character's core struggle, but it would also be nice to see Bishop struggling with something else for a change.

But for all that, the flashbacks to Bishop's past (in the future) are interesting, both for their glimpse at a possible future for the X-Men as for how they inform the present day Bishop's characterization (the reveal that Bishop turned down promotions to stay a "street-level" officer is particularly insightful), as is his banter with Shard, which manages to walk the line of having Bishop treat her as both his sister, and just a holographic representation of her (and we shant lay the blame for the later "Hologram Shard joins X-Factor" plotline at the feet of this mini). And what really sells this story is the art, which does a great job of depicting Mountjoy's creepy body-stealing abilities via melting faces, and imbues the whole thing with a fair amount of energy that helps prop up some of the more repetitious elements of the issue-to-issue.

All in all, then, Bishops first solo outing is a bit of a mixed bag. Plot-wise, it's action-heavy and repetitive, and it involves the character following an already-familiar arc as it unfolds. But there's also some interesting glimpses at Bishop's past, his interactions with his sister work well, and the whole thing is buoyed by some engaging & energetic art.