Thanks to a birthday present from my wife's aunt last year, my wife and I recently attended "Star Wars in Concert", an event in which the Minnesota Orchestra plays the complete score to Star Wars while the film unfolds above it on a big screen. As both a huge Star Wars and film score fan, this was a supremely fun & unique experience ("concert films" are somewhat in vogue these days; the Minnesota Orchestra alone has done or will be doing similar performances of everything from Jurassic Park to Prisoner of Azkaban to Star Trek Into Darkness; when my wife and I were discussing what performances would be fun to see in this setting, I basically settled on "most anything"). Here's a few observations and reactions I had during the performance.

We got to our seats about five minutes before the performance started, and it was tons of fun hearing the different musicians warming up by playing little snippets of the score. So we'd randomly hear a bassoon doing Jabba's theme, then a trumpet doing the Throne Room finale, a french horn playing Luke's theme, etc. It was like a little "Star Wars Themes Greatest Hits" to start the whole thing off.

For those of us who grew up listening to the Star Wars soundtracks, the 20th Century Fox Fanfare is as integral to the opening of the score as the main title theme, and while I'm accepting of the fact that the new films come sans fanfare (since, you know, Fox is no longer distributing the films), it was nevertheless appreciated that not only did the fanfare appear before the film, but that the orchestra performed it as well.

In terms of things the orchestra didn't perform, I was initially surprised when it didn't play the Cantina Band song when Luke & Ben came into the cantina, but my wife pointed out during intermission that they likely didn't play it because it was diegetic, in the same way they wouldn't have played if, say, Han had put a Beatles song on the Falcon's radio while blasting off from Tatooine.

Speaking of intermission, the performance did have one; the movie faded to black as the Falcon was pulled aboard the Death Star by its tractor beam.

Whatever provision George Lucas put into the sale of LucasFilm to Disney regarding the sanctity of the Special Editions as the definitive version of the films apparently extends to things like this, as the version of the film played was definitely the Special Edition (specifically, I believe, the Blu-ray version, as it had the slightly sped up Han/Greedo shoot out), which means we had to watch that stupid Jabba scene (bonus though, was hearing his Return of the Jedi theme live as a result) since it got included in that scene). What was interesting though is that LucasFilm clearly had to alter the film for use in the concert, since the score track had been cut from the film (since the orchestra was now providing it). But all the other sounds, the dialogue, the sound effects, etc., remained. As a result, we could periodically hear things we'd never heard before (mostly during the scenes where there was no music, and thus, the orchestra wasn't playing).

None of it was terribly notable; no whispered directions or out-of-character dialogue or anything like that, mostly just background noises, like footsteps or the swishing of robes, or the sound of Luke's breathing as he ran to his landspeeder upon realizing the Empire was going after his aunt & uncle, incidental sounds that had been picked up during filming but never removed because the music track would cover them up. But it still added a new dimension to the experience, making it slightly different than all the other times we'd seen the movie, even beyond the addition of the live orchestra. 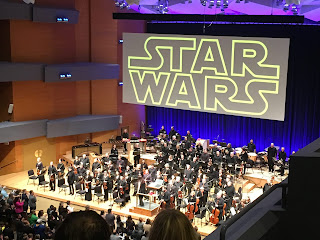