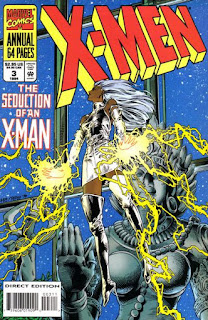 In a Nutshell
Shinobi Shaw tries to recruit Storm to his new Inner Circle.

Plot
Storm receives an invitation to dinner at the Hellfire Club, sent by Shinobi Shaw, along with a bouquet of roses, one of which pricks her finger. Storm accepts the invitation, but acts unusually cool towards her teammates on her way out. At dinner, Shaw presents himself as having changed, possessing a desire to make the world better, with her help. Storm is intrigued, but doesn't immediately accept his offer of an alliance. She returns home, and that night, has nightmares in which her powers are stripped away and given to someone who will use them to more directly to improve the world. Returning to the Hellfire Club, Storm finds Shaw amongst his new Inner Circle, and he reveals he drugged her in order to bring her dark side to the surface. She then rejects him outright, triggering a conflict with the Inner Circle. Just then, the X-Men arrive, having been alerted to Storm's trouble by Professor X. They defeat the Inner Circle, and Storm refuses to kill Shaw, an act which, when she returns home, Xavier cites as proof that Shaw wasn't able to corrupt her morals.

2nd Story: Banshee bursts into Interpol headquarters, enraged to have learned that Lipton is still alive. Lipton was a scientist whom Banshee was assigned to protect early in his career. The pair were attacked by Hydra, and when Banshee revealed his mutant power to Lipton in order to save bystanders, Lipton realized Banshee would be dangerous in the hands of Hydra. So he turned himself over in exchange for Banshee's life. Learning his whereabouts, Banshee storms the Hydra castle where the dying Lipton is being held, to be with the man in his dying hour.

Firsts and Other Notables
This issue introduces a new Hellfire Club Inner Circle, led by Shinobi Shaw, consisting of Benedict Kine, Benazir Naur, and Reeva Payge. They all have powers and junk, but we're given no indication of their titles (ie White Queen, etc.) and they don't appear much (if at all) after this issue, so it's hard to care too much (it's also not the last new Inner Circle we're going to see). 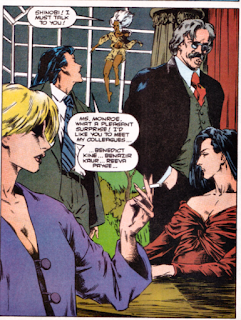 The second story in this issue features Banshee and uses his Interpol days as inspiration, something we don't see very often.

The issue concludes with the usual round of pinups. 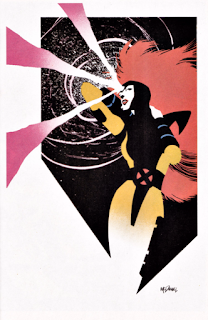 As with the rest of the '94 annuals, this is the last numbered X-Men annual for a while, as Marvel shifts to numbering their annuals by year in 1995.

Creator Central
The writer of this issue is Ian Edington, a British writer whose other notable work for the X-office is a run on X-Force with Warren Ellis as part of the "Counter-X" relaunch.

Gene Ha pencils the issue, between his work on the two "young Cable in the future" miniseries.

A Work in Progress
Bishop apparently sleeps with a gun, which makes sense.

There's a funny bit where Gambit asks Bishop, after saving him from one of the new Inner Circles' attacks, as =ks if he's okay, and he simply says "no". 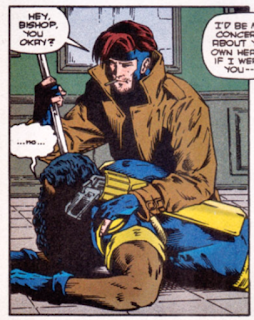 One of the new Inner Circle members has a power that enables her to speed up the ill effects of Gambit's smoking, giving him (presumably) cancerous tumors, making this the second annual in a row to feature weird lesions on one of the X-Men. 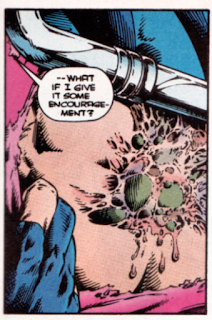 Austin's Analysis
Even putting aside the fact that Shinobi Shaw's new Inner Circle amounts to nothing, this issue is still a dud. If the loose theme of the '94 annuals is "spotlight a villain", Shinobi is certainly a worthy candidate: for various reasons (but mostly his connection to Sebastian Shaw and the Hellfire Club), he's managed to outlast and rise above his fellow Upstarts (clearing a low bar, to be sure) and exist as a villain independent of that group, but he's nevertheless not the most well-developed of villains, and could benefit from a closer examination. But the main story in this annual isn't really about him; it's a Storm story. Which, in and of itself, is also fine, except this isn't a very good Storm story, either.

It's predicated on Shinboi having some kind of deep, meaningful read on Storm, and even if he's ultimately wrong about that, it's confusing as to why he even thought he knew her so well in the first place, given this is probably the first time the two characters have ever directly interacted (constrast this with Shinobi's previous attempt to woo Archangel & Psylocke, which worked thanks to shared upbringings amongst the three and newly-revealed childhood interactions between Shinobi & Archangel). So even if Shinobi's insights into Storm turned out to be particularly cutting (which they're not), they wouldn't make much sense, because the story provides no rationale for Shinobi having them in the first place. The end result is a fairly bland "Storm grapples with her passions/dark side" routine, prompted by a villain who has no cause to even believe she possesses a dark side, who gains nothing in terms of character development via his machinations. The Gene Ha art is nice (if underwhelming compared to what he got to do in the Cyclops & Phoenix mini), but it's not enough to salvage a dud of a story.