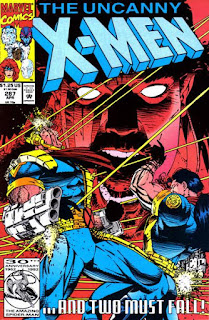 In a Nutshell
Bishop joins the X-Men.

Plot
Bishop, Malcolm & Randall track down the remaining criminals from their future to a Manhattan nightclub. In the ensuing melee, most of the criminals are killed, but Malcolm & Randall die as well, protecting Bishop. Just then, the X-Men arrive on the scene and admonish Bishop for his excessive use of force. He tries to save Storm from one of the remaining criminals, but his intentions are misinterpreted, and he is badly wounded in the ensuing fight. Unconscious, he remembers the events leading up to his arrival in the present, as he, Malcolm & Randall pursue Fitzroy. In the process, they discover a long lost message from Jean Grey; incomplete, it chronicles the deaths of the X-Men at the hands of one of their own. This prompts Bishop to visit the Witness, who is believed to be the last person to see the X-Men alive, but refuses to tell Bishop the identity of the traitor. Just then, Fitzroy escapes from prison, and Bishop, Malcolm & Randall pursue him and his army of criminals into the past. Waking up, Bishop finds himself in the X-Mansion, and is forced to accept that the X-Men are real. He then meets privately with Professor X, who afterwards introduces Bishop to the rest of the X-Men as their newest teammate.

Firsts and Other Notables
This issue launches the X-Traitor storyline, one of the 90s more notable ongoing subplots, which will hang around, generating lots of fan speculation, before finally being put to rest at the start of the "Onslaught" crossover in 1996. The general idea is that at some point in the future, between the present and Bishop's time, the X-Men will be betrayed and murdered by one of their own. Sussing out the identity of the X-Traitor and preventing the deaths of the X-Men will become Bishop's main motivation moving forward (when the writers bother to reference it).

The plotline is setup in two ways: first, via a flashforward to Bishop's timeline, Bishop and his men stumble across the abandoned War Room of the X-Men (the place where they sit around discussing what to do about a given problem) and a recording from Jean Grey. The recording is damaged, so all the pertinent information is cut out, but she declares the X-Men never should have trusted someone, and then is seemingly killed on camera (Onslaught: X-Men, which shows Jean making this recording and fills in the blanks, plays a little fast and loose with some of the dialogue to make it fit with the given identity of the traitor and the circumstances surrounding his attack, but for the most part, is rather faithful to what is shown here). 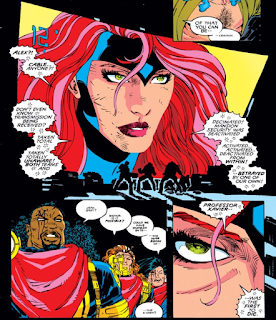 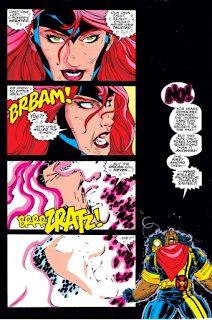 Secondly, after seeing this recording, Bishop proceeds to visit the Witness, a man believed to have, you know, witnessed the death of the X-Men, and thus knows who the traitor is. It's established that Bishop has a past with the Witness, who is quietly hinted at being Gambit - aside from the broken Cajun-esque accent, Bishop calls the Witness "Lebeau", one month after Sabretooth called Gambit the same in X-Men #6 (the true identity of the Witness still technically remains a mystery, though it gets complicated, as these things do). 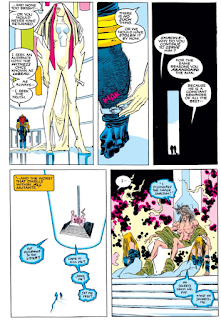 Also, it's worth noting that the idea of the X-Traitor, the brainchild of Lee & Portacio, was introduced without either of them having a specific character in mind. As detailed here, they had a few suspects in mind, including Bishop, they could use depending on how fans were guessing, but of course, they left the books (and Marvel) before deciding anything, leaving it to later writers to come up with the official resolution.

Bishop joins the X-Men this issue, after meeting in private with Professor X, in a scene that echoes Rogue's introduction to the team (someone the X-Men had recently been fighting has a private meeting with Xavier, then is presented as the team's newest member, to the shock of the rest). He'll remain a member of the team, barring a couple sustained absences and well after the whole X-Traitor plotline is resolved, into the 00s, after which his character will be completely assassinated in service of the big plotline du jour. 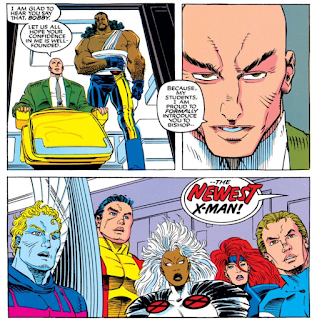 Bishop's associates, Malcolm & Randall, are both killed this issue, a necessary byproduct of making Bishop a member of the X-Men. Along with them, the vast majority of the remaining criminals brought into the past by Fitzroy are killed as well, save one named Stylgut (and Fitzroy himself, of course). 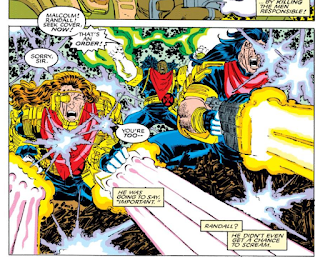 Creator Central
Former regular series artist John Romita Jr. fills in this issue, returning to the series for the first time since issue #211. He'll come back, and stick around a little while longer, starting with issue #300.

This is the first issue of the series since #281 to not credit Whilce Portacio in some capacity.

A Work in Progress
Lobdell does a nice job of selling the idea that the X-Men are legends to Bishop, Malcolm & Randall, with Randall quoting Beast, and Bishop swearing an oath to Cyclops and working "snikt" into his dialogue.

Just in time for them to be killed off, this issue establishes that Malcolm has the mutant ability to detect non-mutants, while Randall is immune to radiation.

It's also established that the police force to which Bishop belongs, the XSE (previously visible on the patch of his uniform) was formed in the wake of the "emancipation", as a way to allow mutants to police themselves. 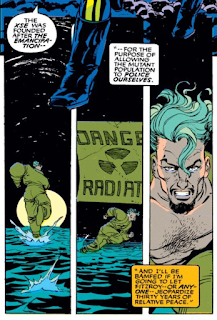 We see the immediate lead-up to Bishop's first appearance in issue #282 from his perspective, as he and his men prepare to enter the portal that brings them to the present day, though in this issue they seem to be aware that it's a one-way trip, whereas that was news to them in issue #283. 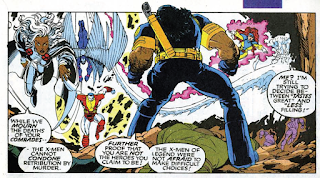 Artistic Achievements
Romita Jr.'s art in this issue is really fantastic. His new, blockier style mirrors the bigger, more pin-up-y stuff the Image guys are doing at this time, but his understanding of basic storytelling technique brings it to a whole other level. The opening two-page splash is a great example - it's as attention-getting and posed as anything Portacio or Lee have done, but there's still a flow to it, the way the dialogue bubbles and bursts of energy lead the eye down the page from Bishop over to Randall then down to Malcolm, and there's little background details that add a lot, like the way the blast triggered by Malcolm creates an effect like a panel gutter that separates the additional panels on the bottom right of the splash. 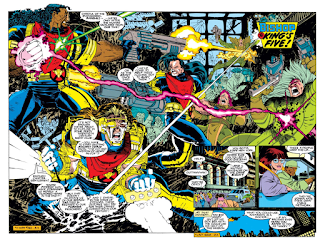 Also, this issue features the debut of Romita's designs for futuristic guns, something he'll expand on in the Cable limited series. For some reason, I've always really liked that design, goofy as it is.

For Sale
The first series of Marvel's X-Men-only trading cards, all drawn by Jim Lee, get an ad in this issue. 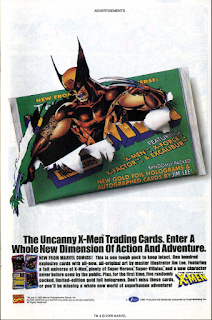 One of the Entertainment This Month mail-order ads gives us our first look at Youngblood, Rob Liefeld's Image launch title (Liefeld is gone, or close to it, at this point). 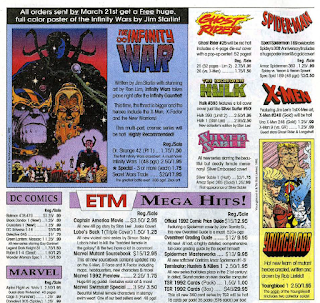 Aw, remember the days back before we knew what a terrible garbage person Roger Clemens is? 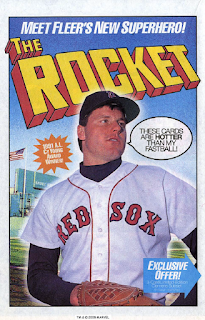 Bullpen Bulletins
Stan Lee's column announces that James Cameron is planning to direct a Spider-Man movie, something he actually did intend to do once, but which ultimately got scuttled due, in part, to the collapse of film studio Carolco, who held the rights to do a Spider-Man movie. Apparently, some of Cameron's ideas were incorporated in the script of the first actual Spider-Man movie in 2002. Lee also mentions than an X-Men film is in development, but we're still nearly a decade away from that being a reality as well.

Also, the latest Cool-o-Meter likes Gene Roddenberry (this was presumably put together not long after his death in October 1991) and Lumpy Addams, and dislikes the recession and belly-button lint.

Austin's Analysis
While Bishop is formally introduced to the X-Men this issue, becoming their newest member, and John Romita Jr. returns (albeit briefly) to the series with his newer, blockier style, this issue is really notable for its introduction of the X-Traitor storyline, which will simmer in the background of both titles for years, occasionally bubbling to the surface, before coming to head as the kickoff to Marvel's linewide "Onslaught" crossover. In the meantime, it will come to dominate fans' discussions of the X-Men, promoting endless theorizing about the identity of the Witness, the traitor, and the circumstances behind the death of the X-Men, as well as inspire a plotline on the animated series and articles in Wizard magazine and the like.

But for now, the storyline is simply intended to give Bishop a specific purpose and motivation within the X-Men, as the rest of this issue, rather efficiently (if a bit abruptly) prepares the character for his role on the team, eliminating his original motivation (capture or kill the criminals loosed by Fitzroy) and isolating him (killing off Malcolm and Randall) so the only place he has to go is with the X-Men. Then the flashforward and the introduction of the X-Traitor gives him something specific to do while with the X-Men, beyond staring in awe at legends come to life (and, as we'll shortly see, spark some immediate character drama between Bishop & Gambit). In all, it's a rather impressive bit of setup for one issue, especially one with a fill-in artist and a brand new scripter, and the high-water mark of the book's brief Portacio era.

Next Issue
Tomorrow, Liefeld leaves and Cannonball returns in X-Force #9. Friday, then more Cannonball in X-Factor #77 on Friday. Next week, the Omega Red story comes to a close in X-Men #7.