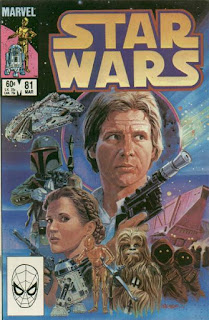 In a Nutshell
Han & Leia travel to Tatooine and fun afoul of a resurrected Boba Fett.

Plot
Shortly after the Battle of Endor, Han Solo finds himself short on credits. Unable to convince any fellow Alliance members to front him a loan, he, Leia & Artoo take the Falcon to Tatooine, in the hopes of retrieving some funds he left with a bank in Mos Eisley. Meanwhile, the unconscious form of Boba Fett is discovered on the outskirts of the Sarlaac Pit by a group of Jawas. In Mos Eisley, Han is frustrated to learn the bank computer won't release his funds because his account was frozen when he was frozen in carbonite. Leia realizes Artoo could talk to the computer, but when she & Han return to the Falcon, Artoo is gone. Spotting small footprints nearby, they figure he was captured by Jawas, and take off in a pair of landspeeders. They track down the sandcrawler as it's being attacked by a group of Tusken Raiders. Han leaps aboard, and discovers Artoo inside along with a conscious but amnesiac Fett. With Fett's help, Han gets Artoo out of the sandcrawler. Han goes back for Fett, but as Leia calls out Han's name, Fett's memories return and he opens fire. Dodging the blast, Han leaps clear just as the damaged sandcrawler careens into the Sarlaac Pit, taking Boba Fett with it.

Firsts and Other Notables
With the Return of the Jedi miniseries considered to take place before last issue and this one, this marks the beginning of the series' post-Jedi era, which will end when the series does with issue #107.

Having been rescued from Carbonite hibernation/Jabba the Hutt in the Return of the Jedi film/comic series adaptation, this issue marks Han’s return to the series. 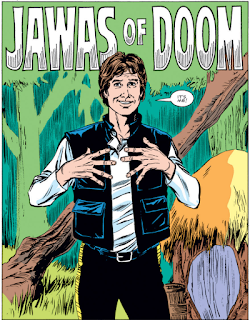 Boba Fett also makes a brief return, having been ejected from the Sarlaac pit and found by Jawas; by issue's end, he is returned to the Sarlaac, but Fett escaping death and emerging from the Sarlaac pit will become a staple of both the later Expanded Universe (in which Fett is revealed to have survived in Dark Horse's first Star Wars miniseries, Dark Empire) and the current Disney canon (in which it's heavily implied that Boba Fett at least escaped the pit in Chuck Wendig's Aftermath novels; it's not yet clear, however, if Fett survived long after that). 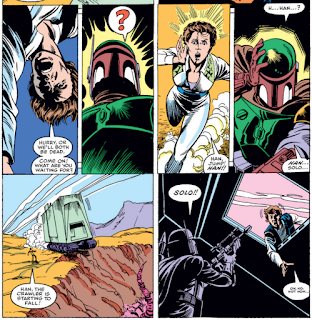 In the wake of the Empire’s defeat, Han finally gets a chance to properly reconnect with the Falcon. 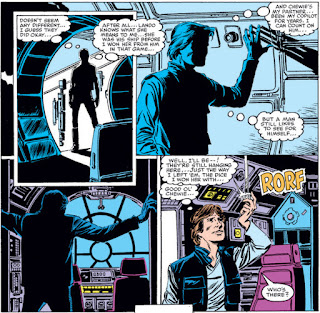 Han’s dice - which served as a plot point in both The Last Jedi and Solo - are referenced as he does so, though their origin is different (here, Han says they’re the dice he won the ship with; Solo shows him in possession of them before the ship). 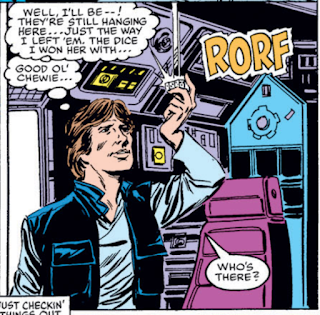 There’s also a really sweet moment between Han and Chewie after Chewbacca finds Han aboard the ship, and they embrace. 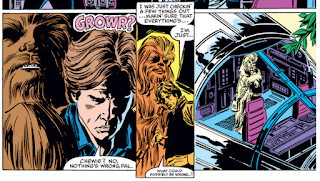 Leia sports a new look in this issue, a white jumpsuit with padded shoulders in the style of the Alliance Hoth uniforms. 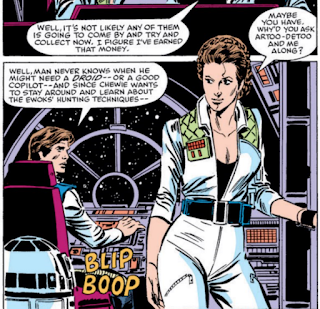 A Work in Progress
Somehow, word of Boba Feet’s fate and the events surrounding Han’s rescue have already made it to the ears of rank-and-file Rebels.

Leia offers to float Han some money, which seems odd since you’d think whatever money she had would already have gone to the Rebellion. 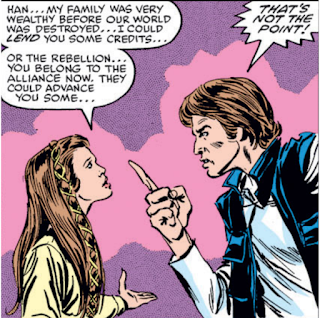 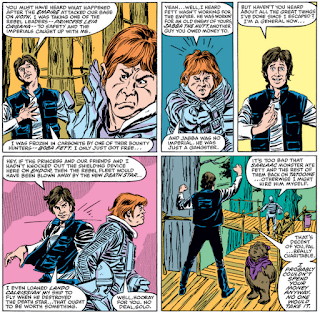 Austin's Analysis
This issue represents both the strengths and limitations of this series. The first half features the kind of thing it should do more often, as Han is shown reintegrating with the Alliance (in microcosm, via one particularly-unimpressed Rebel), then gets a moment to appreciate being back in the Falcon before he and Chewie get a chance to reconnect. These kinds of quieter, character-focused moments, able to occur free of the immediate threat of Jabba and the need to destroy the Death Star, highlight the book's ability to deepen & expand on things featured or implied by the films, but which the films' doesn't necessarily have a lot of time to dwell on themselves.

After that, the issue transitions into a more traditional action/adventure story, albeit with the added impact of Boba Fett's return. And that return illustrates one of the series' big handicaps. Bringing back Boba Fett is exactly the kind of thing this book should be able to do, dusting off a minor but popular character and expanding his story. But because this is a licensed comic, and LucasFilm presumably put the kibosh on a full-on Boba Fett return, the issue has to end with Fett right back where he started, which pretty much robs the story of any lasting impact. It’s a reminder that, as much as the series can do things like explore the ramifications of life after carbonite deep-freeze, there are limitations on how far it can explore.

Next Issue
Luke gets to play diplomat.