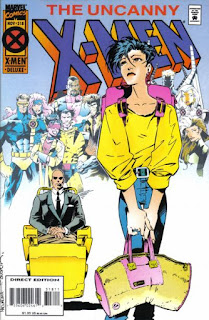 In a Nutshell
Jubilee leaves the X-Men

Plot
Skin, intending to return to Los Angeles, gets a ride to the airport from Beast, telling him not to bother trying to convince him to stay. Meanwhile, Banshee, Storm & Bishop take Jubilee, Monet, Everett & Paige shopping. On the road, Skin is distracted by Beast and loses control of his skin, lashing out at Beast. Back at the mansion, Iceman confronts Emma, demanding she tell him how she used his powers so effectively while in his body, but Emma tells him he needs to grow up and figure it out himself. On the road, Beast gives Skin the keys to the car, telling him he's free to go wherever he wants in order to ignore the world. At the mansion, Gambit helps Cyclops & Jean move into the boathouse, while Professor X bids goodbye to Banshee and wishes him luck as the headmaster of the new Xavier's School for Gifted Youngsters in Massachusetts. Then Jubilee emerges, quietly thanking Xavier for knowing when to hold on, and when to let go, before driving off with Banshee. Moments later, Skin returns, and tells Xavier he would like a place at his school. Xavier sends him after Banshee, then reflects on how he's reached a point where he has more to learn from his students now than he could ever possibly teach them.

Firsts and Other Notables
Starting this month, all of the X-books are published in "Deluxe" format, with shinier, more magazine-like paper (similar to how X-Men Unlimited had been published since its inception) which is meant to serve as a better vehicle for the art, specifically, the more computer-driven coloring (the Image books had all been using this higher-quality paper, so the other, unstated, motivation behind this change is also "to make our books look like the Image ones all the kids are raving about). In exchange, the price per issue is increased to $1.95, up $.45/issue (though both Wolverine & Excalibur were already at that price point and don't increase, while Cable drops five cents in price as it was previously at $2.00/issue). For a time, Marvel will also publish "standard" versions of the same issues, with normal paper and a lower price point, ostensibly for newsstand distribution (similar to how the "Phalanx Covenant" issues were published in a version without the enhanced covers), though that practice won't last long (probably because the newsstand market was already near extinction), and since I was at this point buying all my comics at a handful of local specialty shops, all that was ever available to me were the deluxe versions.

While the "better paper for better art" argument is a valid one, it could be also be argued that this change is a significant contributing factor to the ongoing (and nearly complete) transition of the comic book market at the time from one where comics are an ever-present part of the wider entertainment landscape to one where the entire industry is supported by a smaller niche-audience, where you both have to seek out comics if you want to buy them, and you have to want to spend an appreciable amount of your disposable income on them, because they're no longer available for purchase in multiple places, and are no longer cheap enough to purchase on a whim (at least not, at this point, if you want to buy more than a couple, and keep in mind, Marvel is actively promoting eight monthly X-Men books alone at the same time they're bumping up the price of each by 30%).

On a personal note, I hate the deluxe format. I hated it then, and I hate it now (when it's no longer touted as "deluxe"; just the standard). Whereas comic pages previously had a kind of "fancy newsprint" feel to them (more solid than a newspaper but still kinda cheap), this change essentially turns them into little magazines with slick, shiny paper, and from a tactile (and, yes, even an olfactory, which I know, is weird) perspective, it's just not the same. The "deluxe" comics feel & smell different than what I consider "real" comics, to their detriment. To this day, whenever I pick up a physical comic to read, a little part of me is disappointed when I remember it's not printed on that unique style of newsprint like the comics of old (which is part of the reason why I read so many comics digitally nowadays). I've long maintained that the industry would do well to return to a cheaper quality of paper (because modern printing techniques could support the same style of art on lesser-quality paper) and drop the price per issue, thus returning single issue floppies, which currently tell on average 1/4 to 1/6 of a story per issue, to a more "disposable" model (and thereby theoretically increasing overall sales/market penetration), but no one is listening to me (and of course, no company is going to willingly *lower* prices on anything).

(And yes, I realize all of the above makes me sound like an old man yelling at kids to get off my lawn).

Jubilee leaves the X-Men this issue in order to transfer to the new Xavier's School for Gifted Youngsters in the old Massachusetts Academy, under the tutelage of Banshee & Emma Frost, as seen in Generation X, bringing to a close her tenure on the X-Men which has more or less lasted, since her first appearance in issue #244. For the most part, Lobdell has done an effective job of setting up this departure (even as we've known for months it was coming thanks to the promotion of Generation X), establishing both that Jubilee feels she's not using her powers to their fullest (something also echoed, intentionally or not, in Hama's pre-"Fatal Attractions" Wolverine), and also that she's somewhat overwhelmed by the constant grim-n-gritty grind of the superhero lifestyle (perhaps most espoused by her grief over the loss of Illyana to the Legacy Virus). 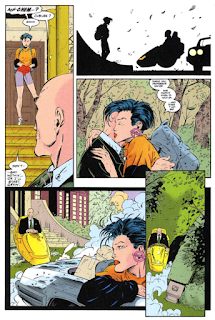 This issue also marks a formal change in the structure of Xavier's school, moving the "School for Gifted Youngsters" moniker over to the old Massachusetts Academy for Generation X, while rechristening the X-mansion as the home of the "Xavier Institute for Higher Learning" (making it, I guess, like a college to the School for Gifted Youngster's high school, if anyone ever wanted to do some kind of "education bureaucracy"-based stories involving the X-Men. Please note: I would love to do those kinds of stories). The change is both a smart way to allow for the creation of Generation X (and the return of a proper "young mutants in school" series), and to also acknowledge, in universe, the reality that the Xavier School previously hadn't been much a school for many, many years (certainly not since the New Mutants became X-Force, but even before the New Mutants, Kitty Pryde aside, it hadn't really been a school since the earliest Silver Age issues), in part because the vast majority of the X-Men are now pushing thirty (or older).

It’s revealed in this issue that Banshee has agreed to become headmaster of a new Xavier’s school, and that Jubilee will be transferring to that school, two fairly momentous decisions which, thanks to the relentless Generation X buildup, were so taken for granted they happen off panel.

In light of being married now, Cyclops & Phoenix move into the boathouse on the mansion grounds in this issue, making it so they’re no longer living in what is essentially a dorm (also, could Cyclops be anymore of a square, what with his polo shirt tucked into his pleated shorts?) 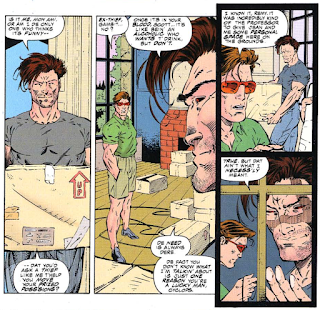 Iceman confronts Emma this issue about her use of his powers while she was in his body, beginning the latest round of “Iceman is upset he’s not using his powers to the fullest”. 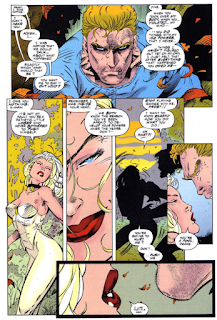 Along with the new paper, this issue debuts the "X-Facts" page, an X-Men-centric replacement for the bullpen bulletins page which highlights specific happenings and hypes upcoming issues while providing a handy monthly checklist of all the X-books. 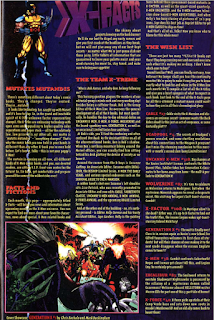 Creator Central
Roger Cruz, in a chrysalis form as he transitions from being a Jim Lee clone to a Joe Madureira one, fills in on this issue. 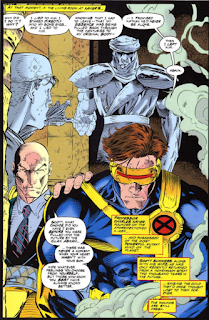 Paige is seen consciously trying to leave behind her southern drawl (saying "mother" instead of "momma"), part of a larger “take me seriously” campaign we’ll see her wage in Generation X. 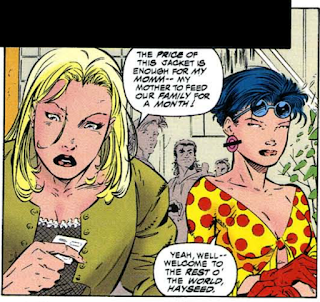 It’s noted that Everett’s power has increased his bulk as part of syncing to Sabretooth, which is presumably a means to explain why he was so much bulkier in these early appearances than in Generation X. 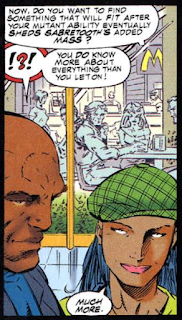 Before she leaves, Archangel checks in to make sure Jubilee knows what she’s doing, and she rightly points out that he’s barely interacted with her since they both started living in the mansion (and tells him to lighten up). 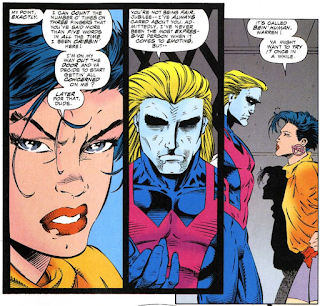 On his way out the door, Banshee question Xavier's decision to give Emma a role in the new school, but Xavier insists there's goodness in her, and that Banshee is just the person to bring it to the surface. 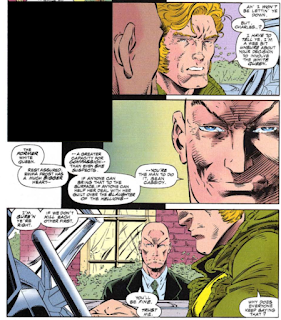 The Grim 'n' Gritty 90s
Remember when not being able to hook up a VCR was a thing? Cyclops, despite having been shown working on the engine of the Blackbird, apparently can’t do it.

Artistic Achievements
The cover of this issue is an homage to Uncanny #138 (and New Mutants #99).

For Sale
The third series of Marvel Masterpieces cards, all drawn by the Hildebrandt Brothers, gets an ad in this issue. 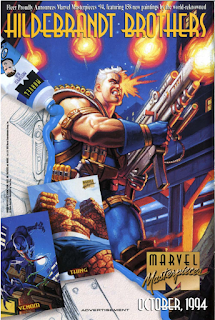 Austin's Analysis
The conclusion of the "Phalanx Covenant" means it's time for another of Lobdell's Patented Post-Crossover issues, those issues immediately following a big crossover which (officially or unoffically) serve as a kind of epilogue and balance out the usually-action heavy crossover issues with something more character-focused. Mostly about the transition of the X-mansion from the home of the "School For Gifted Youngers" to the "Xavier Institute" and Jubilee's departure from the team for Generation X, this certainly isn't nearly on the same level of the similarly-post-crossover issue #297, which is a shame, because Lobdell has shown himself to write Jubilee really well, and her leaving the X-Men of her own volition seems like a perfect opportunity for him to flex those muscles. Instead, we only get two scenes with the character, one which is heartfelt but precisely because it is brief and largely non-verbal, and another that is more notable for the bit of meta-commentary at its heart.

Which isn't to say this is bad; even if it isn't a powerhouse goodbye for Jubilee, this kind of stuff is where Lobdell excels, and the character-driven material is much appreciated after the near-constant action of (the non-"Life Signs" portions of) the crossover. Even stuff like Cyclops moving into the boathouse & talking relationships with Gambit or Iceman not being okay with the way Emma used his body in issue #314 do a lot to advance the narrative & make the characters feel like real people. So even if this issue isn't fully the sendoff Jubilee deserves (or that Lobdell is capable of providing), it still works well enough as Patented Post-Crossover issue.