X-amining Deadpool: Sins of the Past #1-4 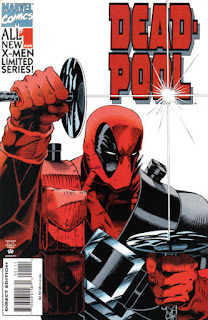 Plot
Issue #1 Juggernaut breaks Black Tom out of a government facility working to cure him of the wood infection ravaging his body, taking with them Dr. Killebrew and some files on Deadpool. Weeks later, Deadpool is attacked at a bar by armored soldiers sent by Black Tom. He is joined by Banshee & Siryn, on the trail of Black Tom, and together they incapacitate the goons. With the trail to Tom cold, Siryn stays with Deadpool while Banshee goes to check with an old Interpol contact. Just then, one of the goons wakes up and attacks Deadpool, slicing off his hand before Deadpool kills him. Siryn is concerned about his injury, but Deadpool insists his healing factor will take care of it, just before he passes out.

Issue #2: Banshee meets with Peyer, a former Interpol agent who partnered with Banshee on a job that Deadpool ended up derailing, causing both men to leave the agency. He asks Peyer for any info on Black Tom's whereabouts, and Peyer promises to look into it. Meanwhile, Black Tom learns that Siryn is involved in the efforts to capture Deadpool, and orders her taken out of the field, sending Juggernaut to capture Deadpool. Siryn & Deadpool manage to escape Juggernaut, only to find a squad of soldiers led by a vengeance-seeking Peyer waiting for them.

Issue #3: Peyer wants to kill Deadpool for ruining his Interpol career, but a furious Juggernaut intervenes in his efforts, until Siryn manages to drop a building on him. Meanwhile, Banshee learns Peyer lied to him. He meets up with Siryn & Deadpool just as they dispatch Peyer's men, having found a possible location for Black Tom in one of Peyer's files. At Black Tom's castle headquarters, one of his goons brings him Deadpool's severed hands, which he orders Dr. Killebrew to attach to Tom's own arm, hoping Deadpool's healing factor will cure him.

Issue #4: Deadpool, Siryn & Banshee break into Black Tom's castle. Deadpool confronts Black Tom, cutting off his hand from Black Tom & holding Killebrew hostage to keep Juggernaut at bay, saying he is the only one who can help Tom. Killebrew puts Tom in stasis, and Banshee decides to take him back to prison, though Juggernaut declares he'll simply break him out once he's cured. Deadpool & Siryn part as friends, with Deadpool taking Killebrew with him to help fix is broken healing factor, while Peyer vows revenge.

Firsts and Other Notables
This series represents Mark Waid's first work for Marvel. Already an accomplished writer over at DC (notable at the time for his groundbreaking run on Flash and work with the Legion of Superheroes, and later Kingdom Come, a run on JLA and much more), this marks the beginning of a brief association between Waid and the X-books, running roughly from now through "Onslaught", during which he'll write Adjectiveless X-Men, but the Waid will prove an uneasy fit with the more editorial-driven X-office and stick around for long. But he will continue to work for Marvel, including a well-regarded run on Captain America going into and coming out of "Heroes Reborn", and later, successful runs on Fantastic Four (with Mike Wieringo), Amazing Spider-Man (as part of the "Brand New Day" team), and Daredevil.

We get our first look at a fully unmasked Deadpool in the first issue. 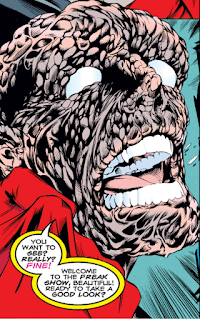 Banshee & Deadpool are revealed to have a past together, with Deadpool responsible for Banshee's departure from Interpol after foiling an operation involving the criminal Farouk (which is also the name of one of the Shadow King's notable hosts, though it's not made clear here if there's any connection).

The Deadpool/Siryn flirtatious relationship, which will get referenced a few times through the years, begins here (though it is of course mostly characterized by Deadpool refusing to take no for an answer, and Siryn gradually warming to him over time despite that). 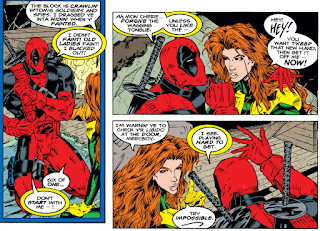 This series introduces two characters - Dr. Killebrew, a scientist who believes he can use Deadpool's healing factor to cure Black Tom, and Peyer, Banshee's former Interpol partner who hates Deadpool for ruining his career - who, as far as I know, have yet to appear outside this series (despite Peyer's series-ending declaration of intended vengeance).

Deadpool spends much of this story dealing with an overtaxed healing factor, which he hopes Killebrew can help counteract. As far as I know, this never gets brought up again in subsequent Deadpool stories (so presumably Killebrew did his job).

Creator Central
The main artist on this series is Ian Churchill, his highest-profile gig to date (he'll take over as the regular artist of Cable following "Age of Apocalypse"). He is assisted in issue #2 by Lee Weeks and in issues #3 and #4 by Excalibur artist Ken Lashley (who somehow isn't able to draw more than a couple consecutive issues of that series, but can fill-in here). Weeks draws the flashback portion of #2, detailing Banshee's past with Deadpool, so that may be a stylistic choice, but Churchill & Lashley trade pages seemingly at random in issue #3 and #4, suggesting deadline issues.

A Work in Progress
Black Tom spends most of this series suffering the side effects of the new wood implants he received from Tolliver, with them functioning as a kind of virus overtaking his cells. 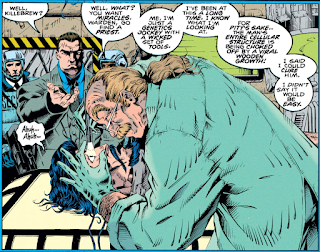 The flashback in issue #2 references Banshee’s love of country music, an early character trait of his that is often forgotten (he was attending the Grand Ole Opry in Nashville when Xavier recruited him to the X-Men, for example). 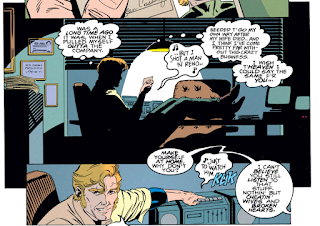 Deadpool rightly points out that despite his frequent claims to the contrary, plenty of people have stopped the Juggernaut. 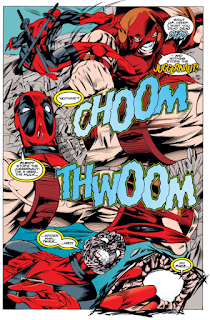 Then, he makes a joke about how logic is what stops the Juggernaut, after he's able to reason Juggernaut into not killing him by pointing out how Deadpool can save Black Tom. 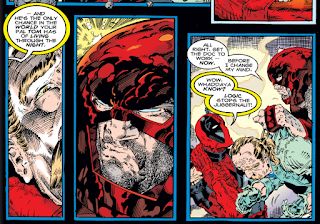 The Reference Section
Deadpool is a pop culture reference machine, of course, and there are plenty such references sprinkled throughout the issue, but amongst the less-obvious ones is his allusion to the commercial for Memorex tapes, asking if the sound was live or Memorex (because it’s so hard to tell due to the quality of Memorex). 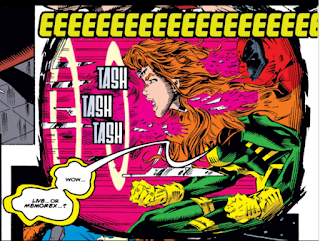 The Grim 'n' Gritty 90s
There’s apparently a knife store in Manhattan that keeps large vats of molten metal in the back room. 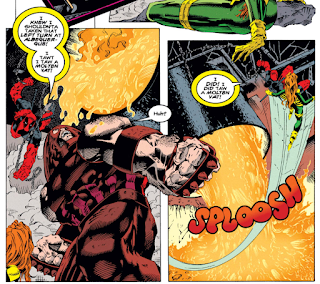 In the course of the final fight in issue #4, Siryn’s costume is damaged to as to expose some cleavage.

Austin's Analysis
In a lot of ways, this limited series reads like a watered-down version of the first Deadpool miniseries. It features Deadpool fighting an assortment of hired goons along with Black Tom & Juggernaut, there's a few characters from the larger X-universe ported in (here, it's Banshee & Siryn), and the art remains largely kinetic and action-oriented even as it loses some of the cartoony charm Joe Madureira brought to the original series. Which isn't to say this is bad, as there are some interesting elements to it. Mark Waid, taking over from Nicieza, has a strong handle on Deadpool's dialogue, making it light & fun without becoming too annoying, the elevation of Black Tom & Juggernaut from secondary villains in the first series to the primary antagonists of this one is a smart way to connect the series (while also leading to some fun Bugs Bunny-esque hijinks in the fights between Deadpool & the Juggernaut), and the reveal of a past history between Banshee & Deadpool, while running the risk of falling into the "everyone knows everyone else" trap, mostly works just for how random it is (and because that encounter is largely explained away in this series, and amounts to little more than a brief run-in). Still, it's hard not to feel like there's a little bit of diminishing returns setting in, if only for the fact that Ian Churchill (and Ken Lashley) are no Joe Madureira, and that, while the first series presented something of a character arc for Deadpool and resolved the whole "Tolliver's Will" thing, this one is more of a narrative cul-de-sac (it starts with Juggernaut breaking Tom out of government care, and ends with him putting him back there), even as Deadpool himself remains, at this point in time, still enough of a uniquely- and well-written character to carry the series over some of its rougher patches.