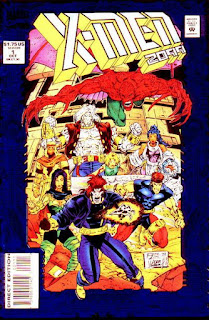 In a Nutshell
Tim Fitzgerald is asked to join mutant leader Xi'an's X-Men just as Xi'an is betrayed by one of their own.

Plot
In the year 2099, mutant drifter Tim Fitzgerald arrives at the seemingly-abandoned Nuevo Sol. He is ushered inside by Junkpile, where he discovers a thriving community of societal outcasts, and is shown around by Tina. Meanwhile, mutant leader Xi'an confronts casino magnate Noah Synge, warning him his attacks on Xi'an's people must stop. Elsewhere in the casino, environmental activist Bloodhawk is sentenced to death via a game show, only to be rescued by Meanstreak & Krystalin, two of Xi'an's operatives. Though grateful, Bloodhawk refuses to join Xi'an's group, and flies off on his own. Later, Lytton & Desdemona Synge discover their father has been killed in a manner consistent with Xi'an's disintegration power, and Lytton demands vengeance. Meanwhile, Xi'an arrives back at Nuevo Sol. After checking in with Cerebra, his second-in-command, Xi'an addresses the crowd, including Tina & Tim, speaking about the strength of the diversity of the gathered crowd and their desire to create a better tomorrow. As Krystalin & Meanstreak join the group, Tim spots a sniper in one of the balconies, and uses his power to blast him. However, the assassin still gets off a shot, grievously wounding Xi'an. Just then, Synge's casino enforcers arrive, and as Cerebra leads the escape of Xi'an's followers, the barely conscious Xi'an tells a stunned Tim he knew he'd join Xi'an's X-Men.

What to read the rest? Become a patron via Patreon!
Newer Post Older Post Home
Posted by Austin Gorton at 12:00 PM