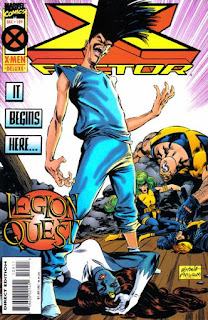 In a Nutshell
Legion wakes up and heads out to set things right.

Plot
Mystique attacks the revived Legion, who telekinetically pushes her away. She manages to escape into the city, with X-Factor in pursuit. Later, Mystique meets up with Avalanche, but X-Factor tracks her down. Avalanche triggers a tidal wave, and while X-Factor deals with that, Mystique escapes again. Wolfsbane & Forge both track her down again, but their fight is interrupted by Legion, who brings Mystique onto the Astral plane where he passes along a message from Destiny. He then returns to the physical world to find X-Factor waiting for him, and he teleports them all away, before flying off by himself, leaving Mystique behind, saying he's going to fix everything, going to make it better.

Upon regaining consciousness, it appears that David’s personality is dominant for the first time since his powers manifested. 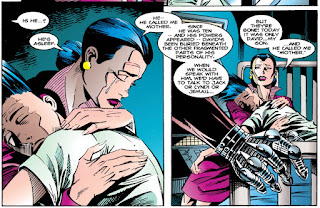 On the Astral plane, Legion meets with Destiny , who insists she doesn’t blame him for killing her as it was fated (and not entirely his own fault, a reference to his being controlled by the Shadow King). 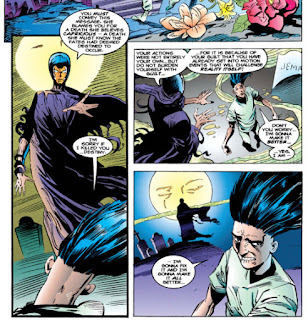 A portion of the conversation between Xavier & Legion from Uncanny #319 (in which Legion posed as Magneto) is presented here from Legion’s perspective. 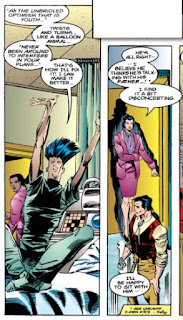 A Work in Progress
Mystique theorizes that she tripped some kind of telepathic alarm in trying to kill him, which forced him to regain consciousness. 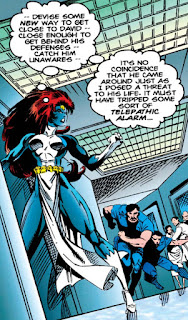 Val is smarting over the failure of Freedom Force and Mystique failing to live up to the bargain she made as part of the project. 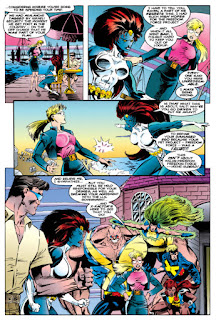 Forge & Mystique fight, but know each other’s moves too well from their time together between Uncanny #290 and #301. 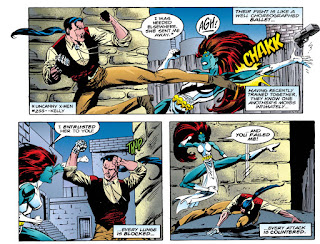 Austin's Analysis
Given that this is plotted by an incoming writer with very little experience in the X-universe and an outgoing scripter who wasn't on the book very long, it's kind of amazing just how deeply this issue draws on past (non X-Factor) continuity. The events of Uncanny X-Men #255 loom large over the story, informing all the interactions between Mystique & Legion, as does the history of Freedom Force (presented with very little explanation), which informs the interactions between Mystique and Val (and, by extension, X-Factor), and Forge & Mystique's brief time together. While these aren't the deepest continuity cuts, they're also not casual ones, making it all the more surprising that this issue is penned by a pair of relative X-Men neophytes.

Of course, the downside to all this is that the story is primarily about Mystique and Legion (and the broader goal of setting up "Legion Quest), which means X-Factor is relegated to little more than background players in their own title. The thread tying X-Factor to all this comes through Val & Forge, and that's fine, but it makes the rest of X-Factor, the ostensible stars of the books, the ones with the lowest stakes in the story. Wolfsbane gets to track Mystique (but no reference is made to her past encounters with Legion as one of the New Mutants), and Strong Guy gets in some pop culture references while X-Factor cleans up in Mystique's wake, but otherwise, the bulk of the book's main characters mostly just hang around in the background, popping in every once in awhile to blast something or grab something magnetically, while Mystique, Legion, Forge and Val get to do the narrative heavy-lifting. Which doesn't make this a bad issue, but does mean it's not a great one for the stars of the series.