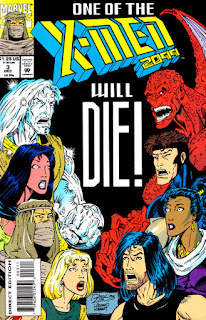 In a Nutshell
One of the X-Men dies as the rest rescue Xi'an from Junkpile & Lytton Synge.

Plot
Bloodhawk attacks the Vegas strip outside Synge's casino, creating a distraction which allows Cerebra, Tim a& Tina to sneak inside. and free the captive Meanstreak & Metalhead. Meanwhile, Krystalin learns Lytton Synge killed his father & framed Xi'an. She tries to kill Lytton, but is stopped by Junkpile. Elsewhere, the reunited X-Men are confronted by the Rat Pack, but Cerebra is able to activate Tim's power to blast them aside. As they close in on Xi'an's location, they are confronted by Junkpile, who kills Tina and shatters one of Bloodhawk's wings before he's stopped by a newly-revived Xi'an. He easily dispatches Junkpile, but refuses to kill him, then reveals that the cocoon he was in both healed his injury and activated a new power, giving him the ability to heal others with one of his hands. He is able to repair Bloodhawk's wing, but is unable to bring Tina back from the dead. Just then, Desdemona appears. She tells the X-Men they are free to go, as she knows her brother killed their father. The X-Men return to the desert where they bury Tina, while elsewhere, Brimstone Love has a woman named Luna dispatched to investigate the new mutant phenomenon in that area.

What to read the rest? Become a patron via Patreon!