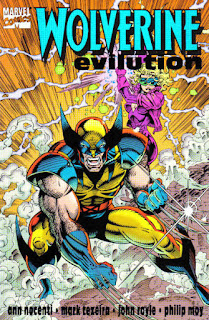 In a Nutshell
Wolverine & Boom-Boom team-up when a teen cult raises a demon.

Plot
A strange dream leads Wolverine to the small town of Prescott, which is dealing with the pollution caused by a recently-closed nuclear power plant in town. Boom-Boom is also in town, as she periodically visits the mall there, and they both encounter members of the Devos, a cult of young people dedicated to destroying technology and returning the world to a more primitive state. Using rituals involving animals & technology, the Devos manage to summon an ancient demon. Wolverine tells Boom-Boom to leave town, but she doesn't, and is captured by the Devos. With the help of a local, Red Water Fall, Wolverine tracks the Devos to the abandoned power plant, where they intend to sacrifice Boom-Boom. Wolverine & Red Water Fall rescue her, and then Wolverine & Boom-Boom team-up to defeat the demon and shut down the Devos, but the demon swears he will return.

Firsts and Other Notables
This is another standalone Wolverine oneshot; it presumably functions as Wolverine's 1994 annual. It is squarebound and cost $5.95.

Boom-Boom is apparently known to hang our in the town of Prescott, something never mentioned before or since. 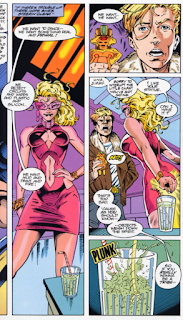 Wolverine is guided by an American Indian named Red Water Fall, who basically functions in a “magical negro” role in the story, providing Wolverine with sage advice and helping him find the right action to perform; this is his first and only appearance. 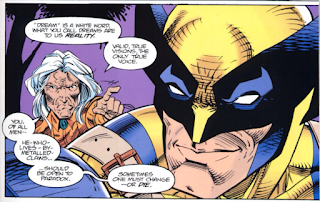 The Spear of Destiny (aka the spear which pierced the side of Christ at the Crucifixion that shows up in a lot of fantasy/occult stories) features in this story briefly (one of the Devo kids steals it from a museum in Germany and delivers it to the demon they've summoned for...reasons).

If the name on the front didn’t make it clear, the pre-title page text screams “Ann Nocenti wrote this!" 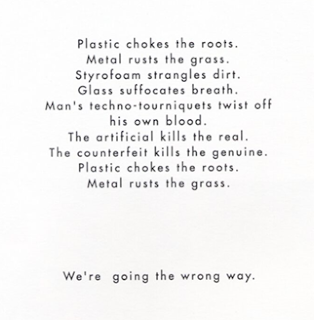 The Chronology Corner
As a note at the beginning of the issue states, this story obviously takes place before Wolverine lost his adamantium in X-Men #25. More specifically, it takes place between issues #9 and #10 of X-Men, and before issues #66 of Wolverine. Boom-Boom appears between X-Force #5 and #6

What's even the point of this?

Next Issue
The new Dark Riders debut in Cable #17! Next week, Bishop gets the limited series treatment.