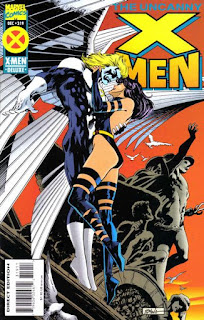 Plot
Rogue joins Iceman for a visit home, while Xavier is seemingly visited in a dream by Magneto, and Archangel & Psylocke go out for a night on the town. As Iceman storms out of his house when it becomes clear his father isn't just perennially disappointed in his son, but is also a bigot, Magneto suggests to Xavier that the world would be a better place if Xavier hadn't had to spend so much time fighting Magneto, then reveals himself to be Xavier's son, Legion. Elsewhere, Psylocke & Archangel pledge to avoid the romantic pitfalls of their peers and keep things simple, simply being there for one another when needed, while Rogue helps Iceman grapple with the disconnect between his own morality, which he'd thought he'd learned from his dad, and his dad's bigotry. At the X-Mansion, Xavier wakes up in a panic, drawing the attention of Beast, whom he tells about his psychic encounter with Legion. When Beast asks which of Legion's personalities was in control, Xavier tells him that's what is scaring him: for the first time, Legion seemed whole and in full control of his mind, meaning a desperate, unstable boy now has access to potentially-limitless power, and he's set himself on some kind of mysterious mission.

Firsts and Other Notables
Rogue and Iceman visit Iceman's family together in this issue, a somewhat random pairing (had they shared any page time, outside of fight scenes, in anything together up to this point?) that will be returned to post-"Age of Apocalypse", when Rogue flees the mansion after discovering something terrible in Gambit's memories, and Iceman comes along to keep her company (with that pairing presumably inspired by their road trip together here). 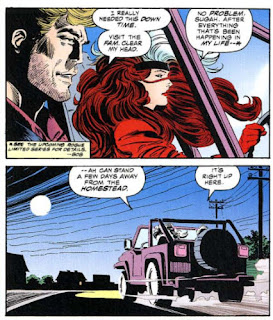 In a dream, Legion, posing as Magneto, asks Xavier the question of what his life would be like if Magneto hadn't been around to foil his plans, which will form the backbone of Legion’s (ultimately failed) plan to kill Magneto in the past to make Xavier’s life better, this leading to the Age of Apocalypse. A portion of this conversation will be shown, from Legion's perspective, in X-Factor #109. 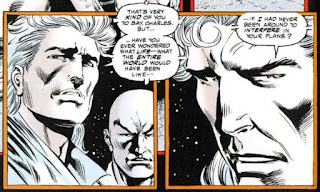 This in turn leads to Xavier realizing his son has returned, and that his mind is no longer fractured, something which frightens Xavier.

Psylocke & Archangel are effectively a couple as of this issue. Though it will be blown past in the face of bigger things in the short term, their relationship will become a much bigger deal later, during Remender’s X-Force run. 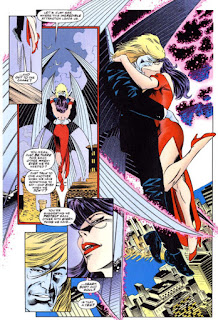 Also, Psylocke’s hair is long again, after a point was made of it being short in X-Men #38.

Creator Central
Not yet the regular penciller on X-Factor, Steve Epting is the guest artist on this issue.

A Work in Progress
Iceman is continuing to struggle with the way Emma Frost used his powers while in control of his body. 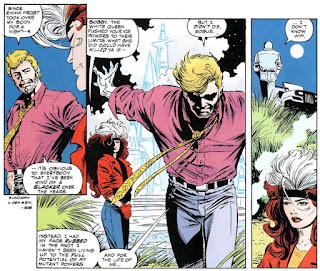 It turns out that while Cameron Hodge took all of Worthington Enterprises from Archangel (back in X-Factor), Warren’s family fortune remains intact (which wasn’t really how it was presented back in the day, but this doesn’t specifically contradict anything).

Iceman’s dad continues to be a jerk, including throwing shade at Opal. 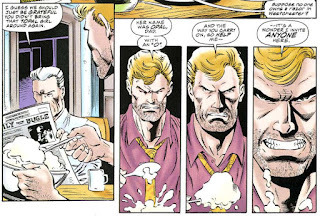 This leads Iceman to grapple with the fact that he always thought he learned his more heroic tendencies from his parents, but now he’s not so sure. 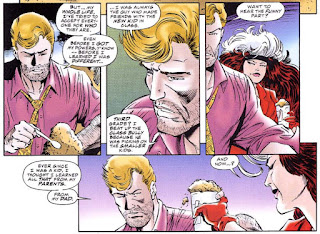 Young Love
Archangel & Psylocke mocks the trope of love amongst the X-Men (though once again, I have to point out that while the crack about dying and coming back to life is clearly a shot at Jean Grey, she’s technically only done so once, which is the same number of times Psylocke has died and come back at this point - and Psylocke’s not done). 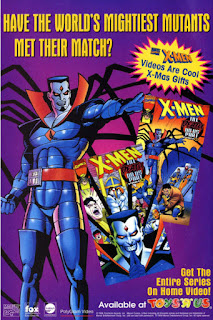 Austin's Analysis
Falling as it does between last issue's "Phalanx Covenant" epilogue and the start of "Legion Quest" next month (which is itself just the prelude to "Age of Apocalypse"), this is the one issue in a ten issue run (including the four "AoA" issues) that isn't part of, reacting to, or setting up a crossover (and even here, technically a third of the issue is setting up a story that sets up a crossover). And while this isn't technically a Lobdellian Post-Crossover Issue, it is structured very similarly to one, especially issue #297, presenting three unconnected narratives featuring a pair of characters each.

Of course, it doesn't work quite as well as that issue, mostly because the three narratives lack the emotional weight of the stories in #297. The Rogue/Iceman story is the best of the bunch, and frankly gains something just from the randomness of pairing the two characters together. The Psylocke/Archangel date is fine, but while there's something fun in the way they basically acknowledge they're comic book characters trapped in one of the soapiest comic books of all time, their pairing, especially at this point in time, when it's relatively new, lacks the emotional heft and push/pull at the core of the Rogue/Gambit romance that was highlighted in #297 (or, of course, the sweeping aura of destiny that permeates Cyclops & Jean's relationship). And the Xavier dream sequence, while raising some interesting questions about fate and the ripple effect of decisions, is ultimately little more than a "Legion Quest" setup.

So while it's certainly appreciated to get a more character-focused quiet issue (particularly one that isn't also as concerned with moving characters around & closing out a storyline, as with the previous, similarly "quiet", issue), especially in light of all the narrative craziness that has happened and will be happening, and everything here is competently-written and well-drawn, the specific content of this issue does little to make it standout as more than a rare island in a sea of issues concerned with bigger, louder and more narratively-significant things.

Next Issue
Tomorrow, Legion takes the stage in X-Factor #109. Friday, Deadpool drops by Wolverine #88. Next week, things get extreme in X-Men #39.